Aulani, a Disney Resort & Spa is a fairly large resort with a variety of room types, many activities, and a handful of places to eat.  As such, I’ll cover each of these points in separate posts in what will be a three-part series.  First up will be the Accommodations at Disney’s Aulani.

After we returned from our Pacific Northwest Adventure, the wife and I did a staycation at Aulani, a Disney Resort & Spa in the Ko Olina Resort.  Such a ritual has become pretty standard over the years for us as a way to “recover” from a long vacation away.  We don’t get a lot of sleep on those types of trips since we’re always on the move, so doing this makes sense. 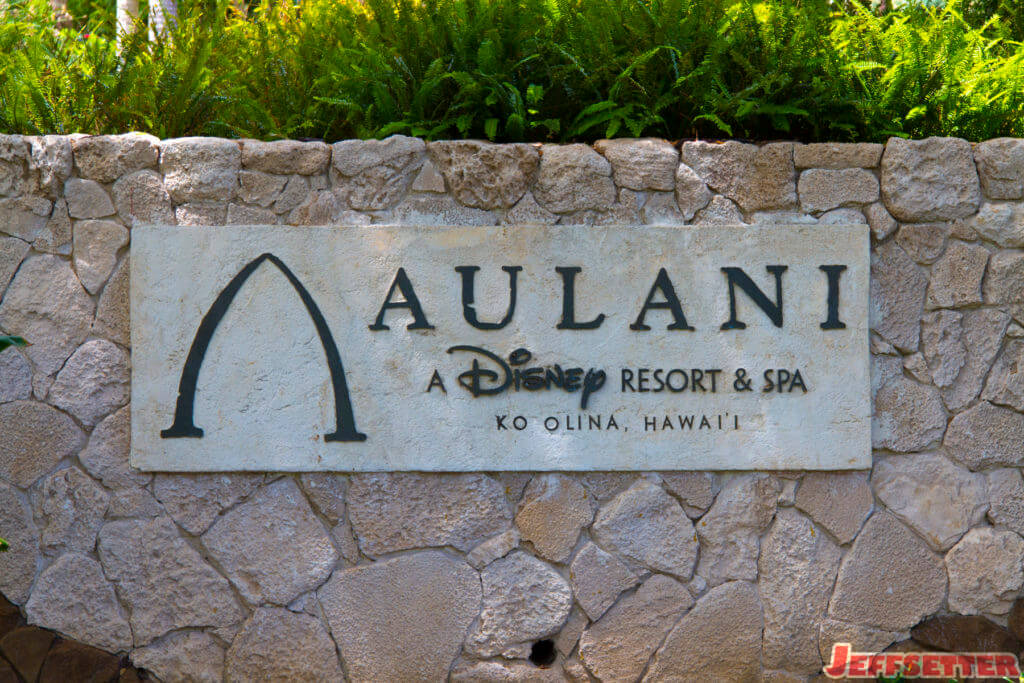 So once we arrived back home, first things first would be to check-in online if we hadn’t done so already.  Once we arrived at Aulani, we’d always head straight into the self-parking lot, as DVC members receive complimentary self-parking.  Alternatively you could head to the porte-cochere for valet parking.  Either way, you can head strait to the online check-in kiosk in the porte-cochere where they’ll ask for your name and greet you with leis; orchid for women and kukui for men.  You are then lead into the lobby. 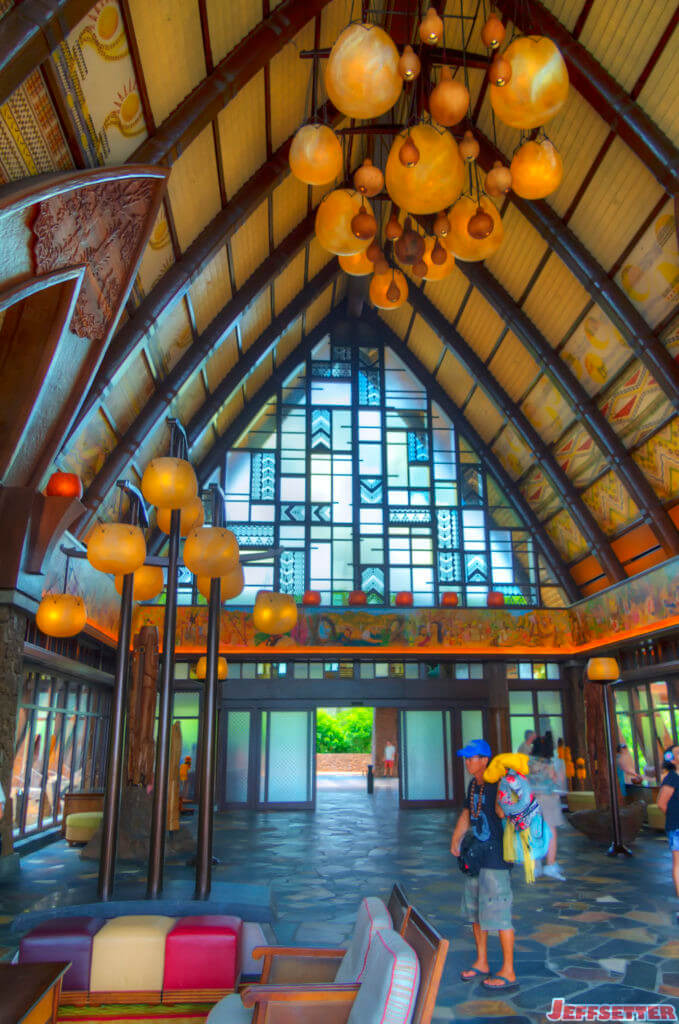 If this is your first time  here, you’ll be given a mini tour around the lobby area, and then lead to the lanai just off the lobby.  Here your guide will give you a brief description of the Waikolohe Valley and all of its features. 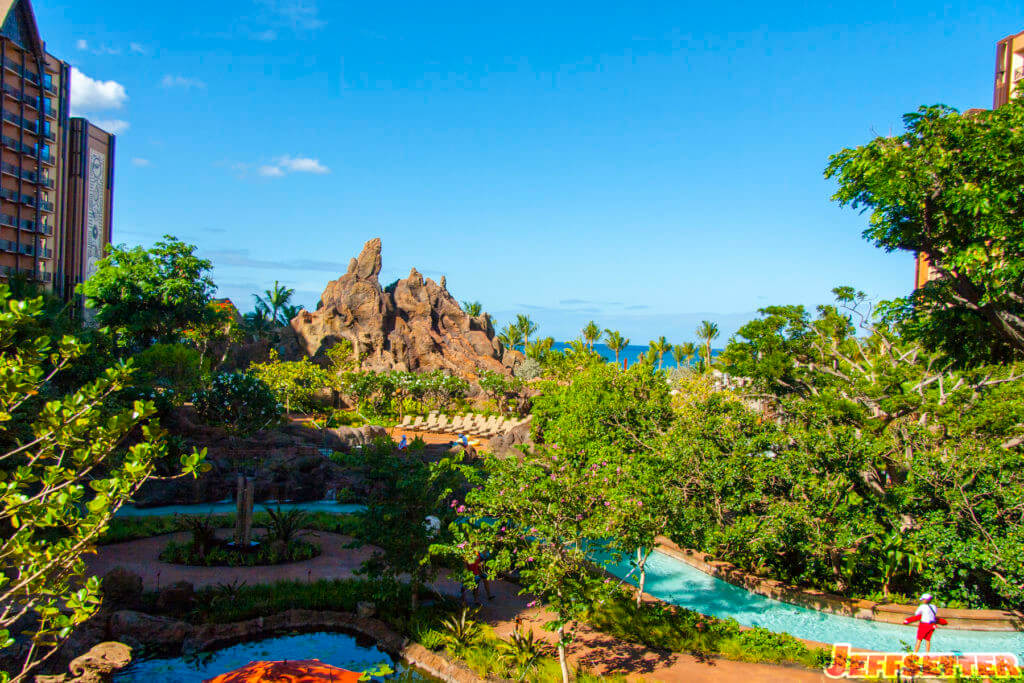 During each of our stays, we’ve nearly always stayed in the Deluxe Ocean View Studio, which is basically a standard hotel room with a kitchenette. 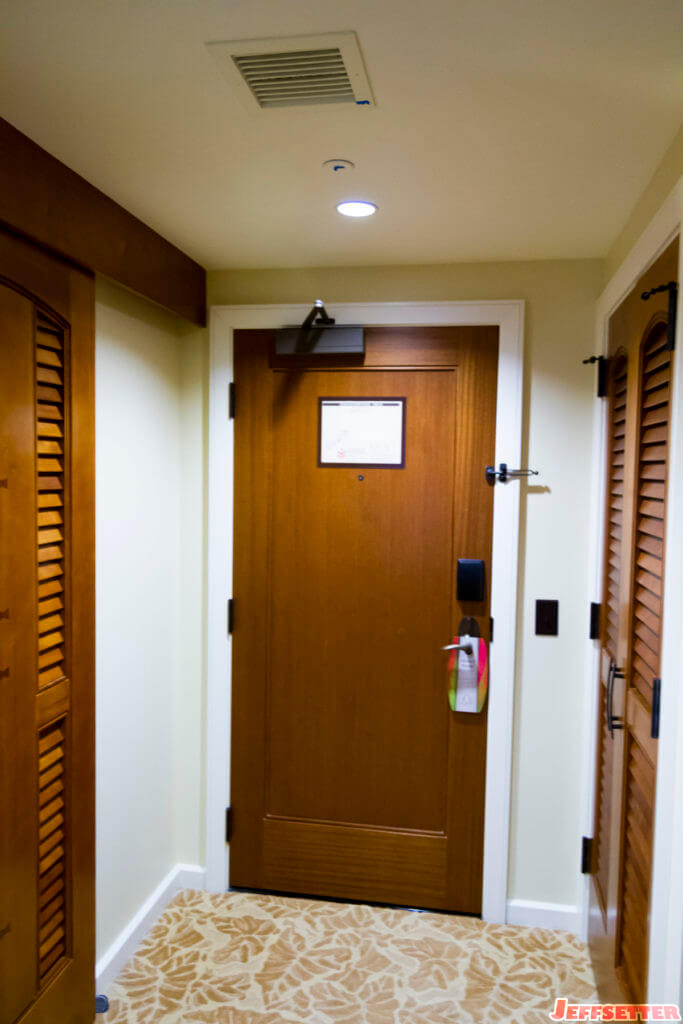 Immediately upon entering the room you’ll find the bathroom to the right. 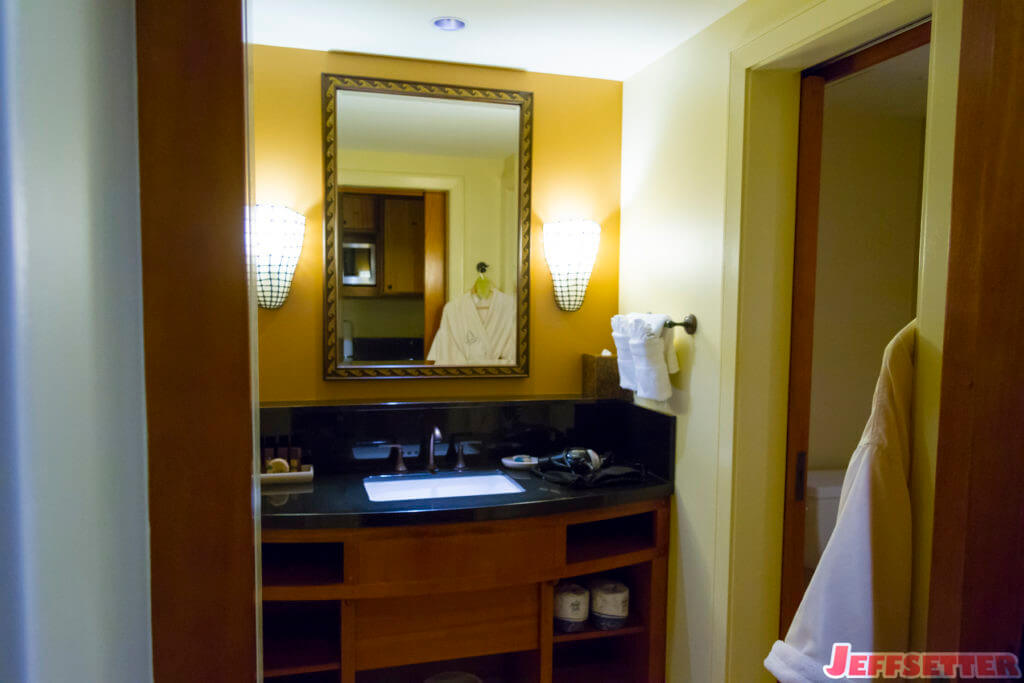 The bathroom itself is sectioned into two parts, there’s the single vanity with the shower, and on the other side of the shower is the toilet behind another door. 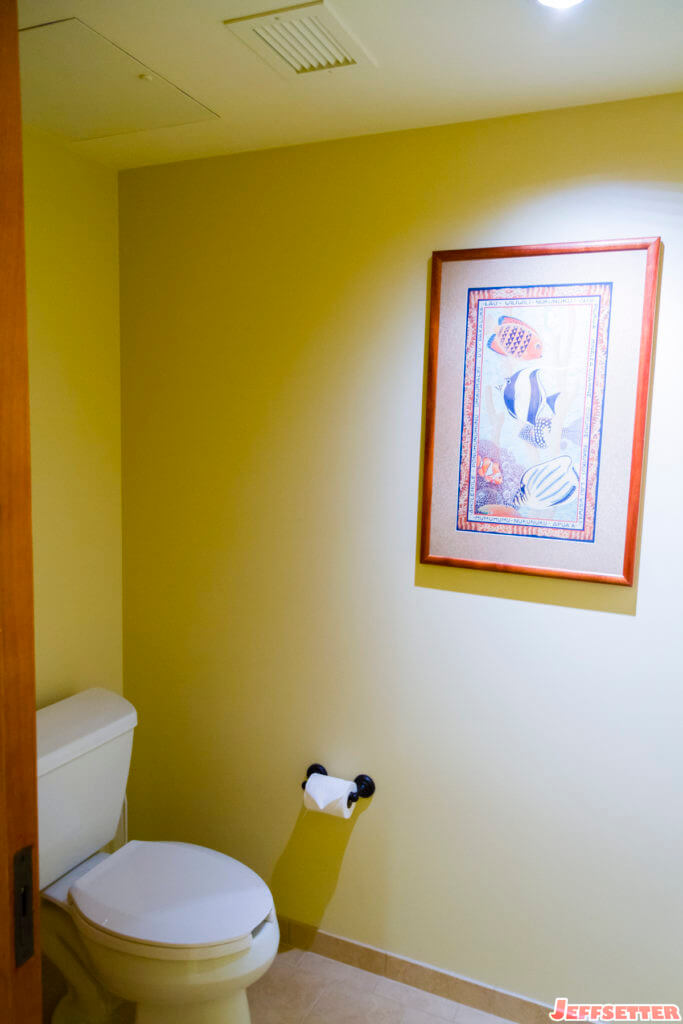 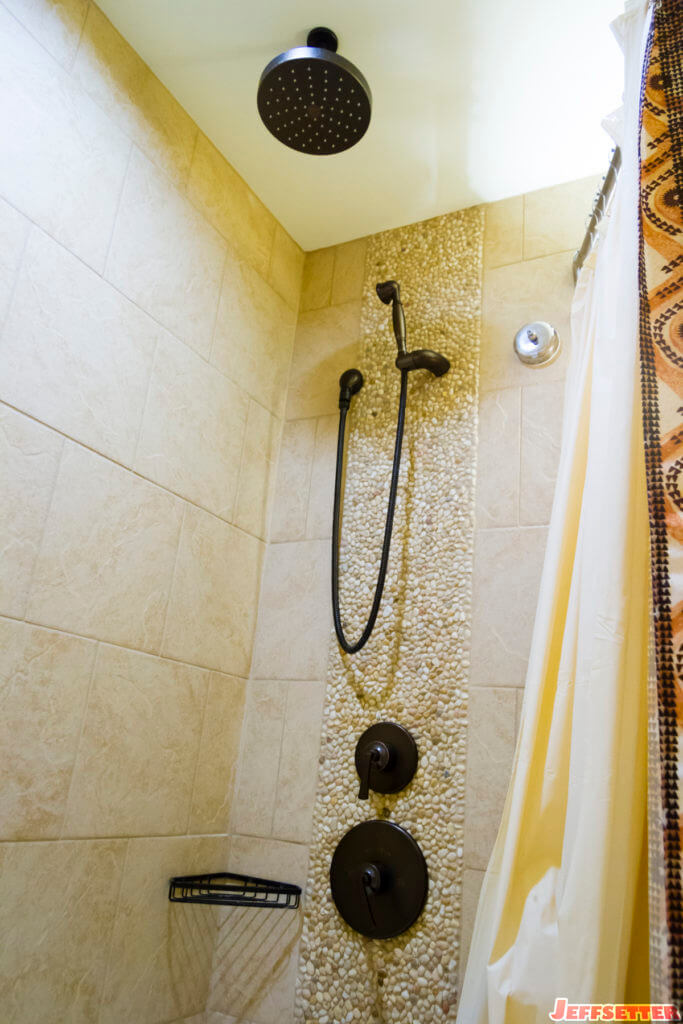 The shower is actually a shower/tub combo, but the tub is so shallow I’m just calling it a shower.  And as that, it’s pretty good!  When the property first opened, the water pressure was a bit low, but now days the pressure is great, as is the temperature.  The controls, once you figure them out, are fairly easy to use too.  The only catch?  You can’t use both the rain head and the handheld sprayer at the same time.  But that’s a relatively minor point in my opinion.

Directly across from the bathroom are the closet and the kitchenette.  I didn’t catch a picture of the closet, but it’s your standard hotel closet with a nice door.  In it are the iron, ironing board, and what probably distracted me, this stupid small safe. 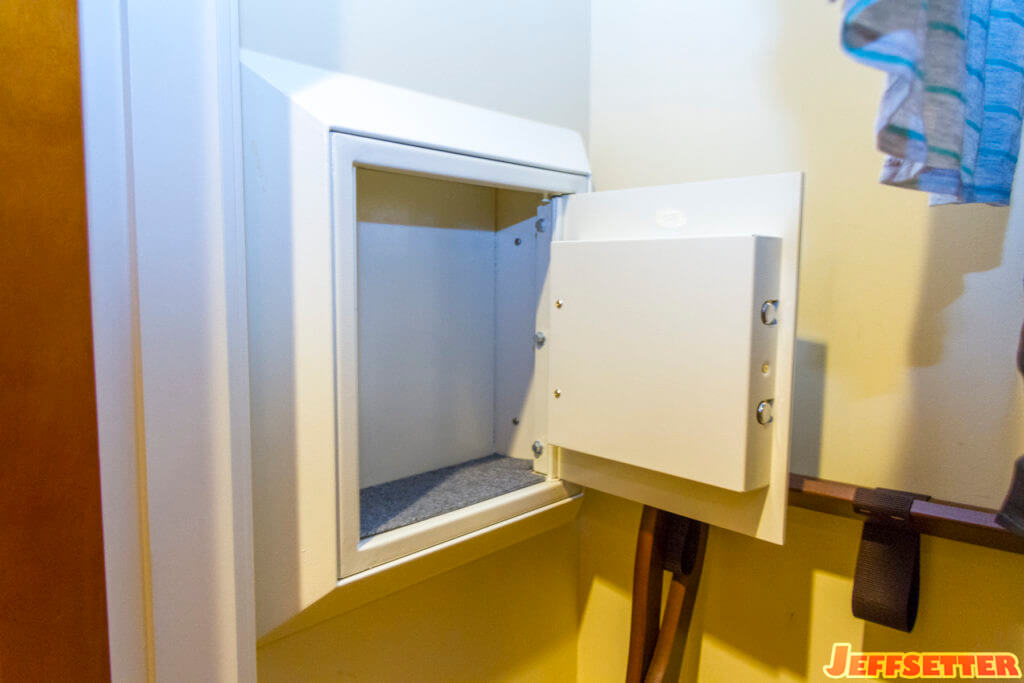 Look at it!  The safe is SO SMALL.  It’s literally USELESS!!  Come on Disney… What kind of a joke is this? 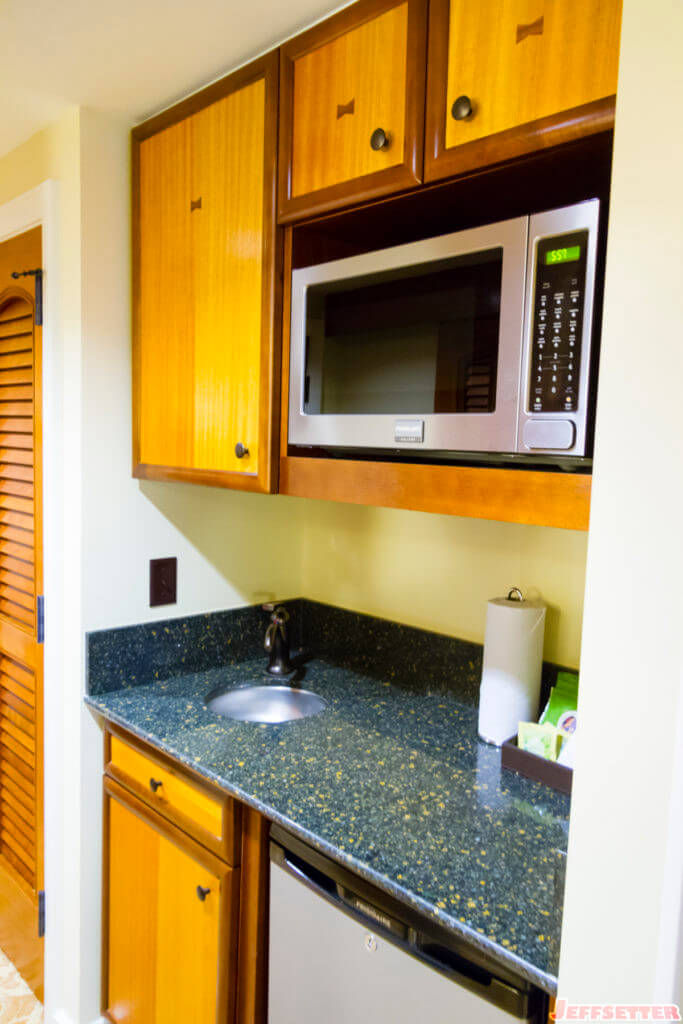 The kitchenette has a nice black granite counter top with wet bar, a nicely sized mini-fridge, and a microwave.  In the lower cabinet are a garbage bin and recyclable bin (big) and utensils (small drawer).  The top cabinets hold drink ware, dishes, and some small appliances like coffeemaker, toaster, etc.  You also get a roll of paper towel, coffees + teas with accompaniments, and a small bottle of Palmolive + a 3M sponge. 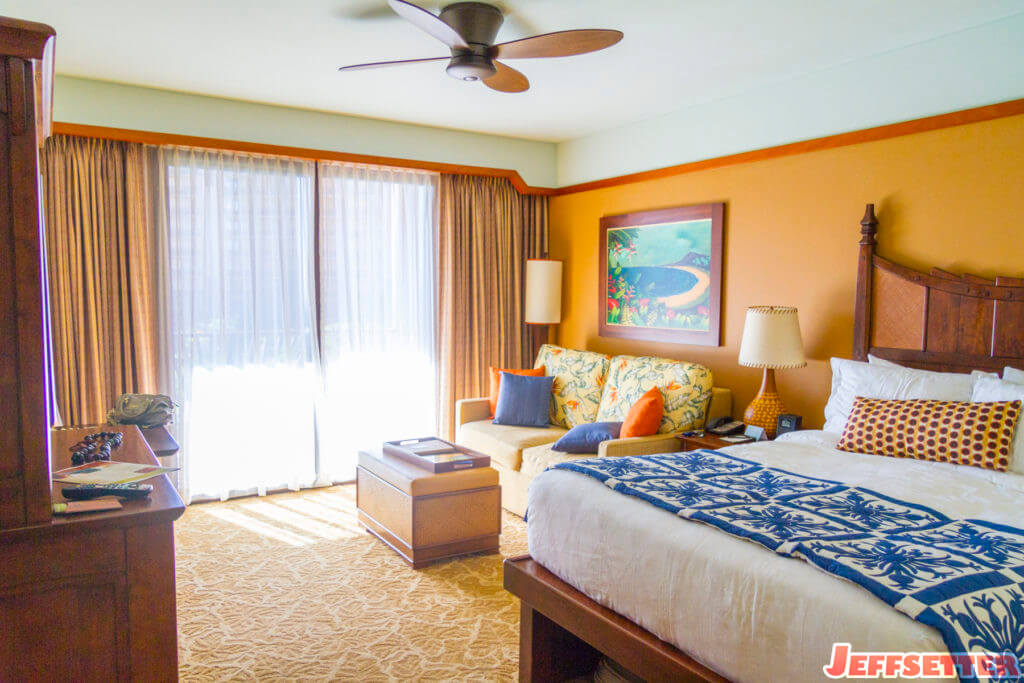 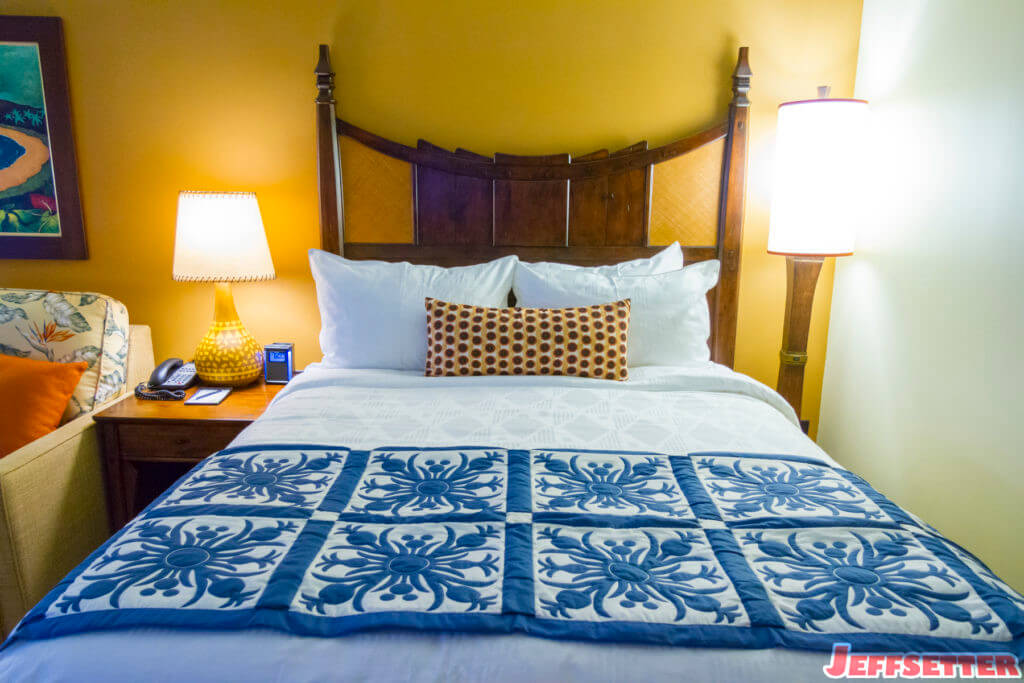 In the main portion of the deluxe studio rooms is the bed, sofa, table, and TV.  The bed in all studios are just a queen bed, which are on a platform.  The bed itself is a bit high to allow standard sized suitcases to be stored under the bed.  If you need another, the sofa does fold out into another queen bed. 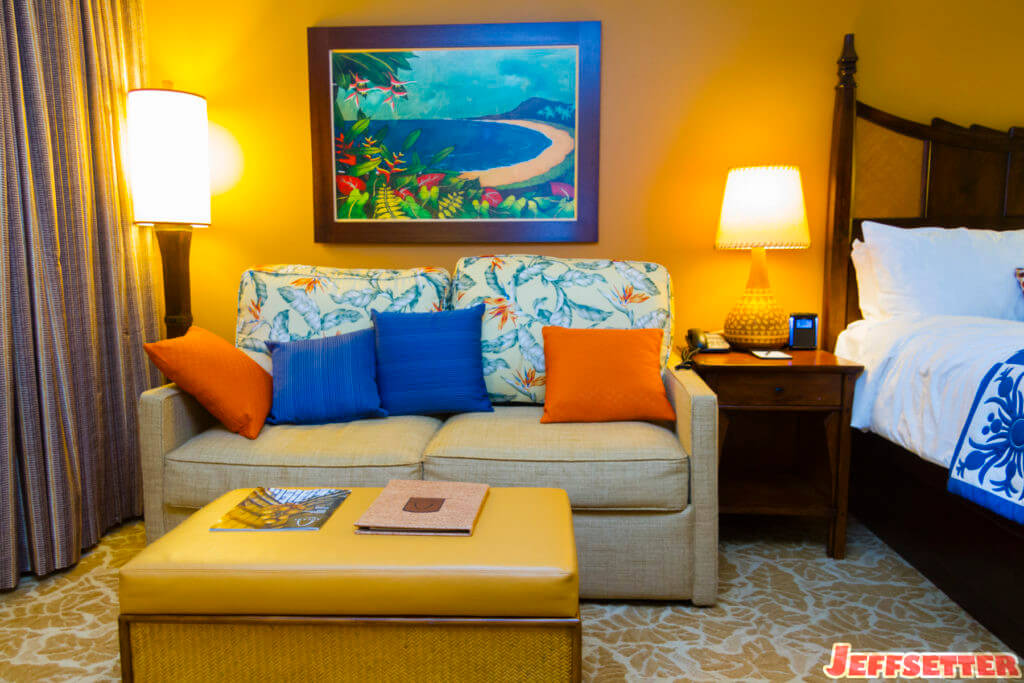 See that ottoman in front of the sofa?  It stores the extra comforter and pillows.  The room also has an iHome radio alarm clock with 30-pin dock connector and a phone on the nightstand. 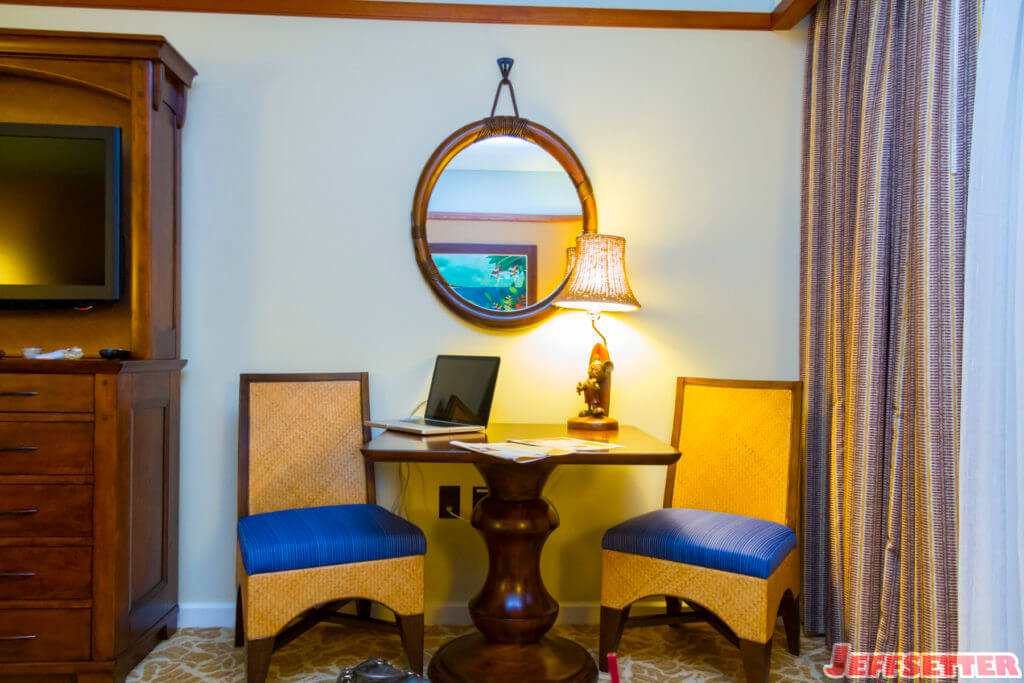 Across from the sofa is a small table with a Mickey lamp and two chairs.  Next to it are the dressers with the TV and a Blu-ray player. 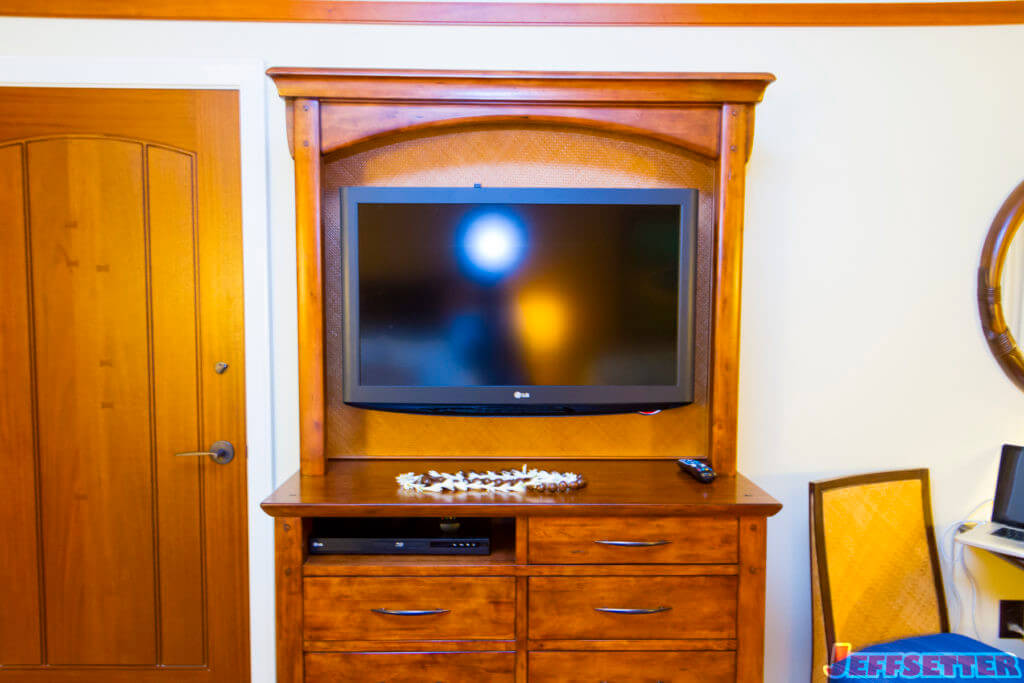 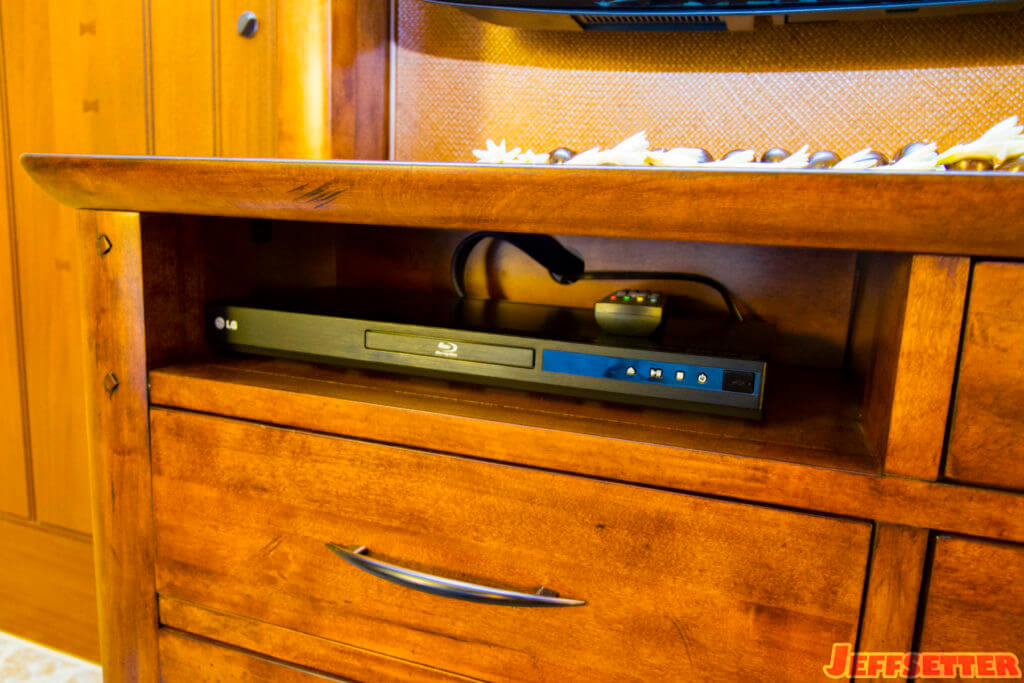 Opening the “drawer” next to the blu-ray player reveals a set of a/v connectors, perfect for your Apple TV, Roku, etc.

Now, the wife and I have never stayed in anything but a Deluxe Studio, but the we have gifted a two-bedroom villa to relatives.  The two-bedroom villas actually come in two different styles, a one-bedroom + studio combination or a single unit comprised of what would be a one-bedroom unit plus a studio that has two queen beds (minus the kitchenette and sofa).  Since I’ve already shown the studio above, I’ll leave that out of the two-bedroom unit pictures to follow. 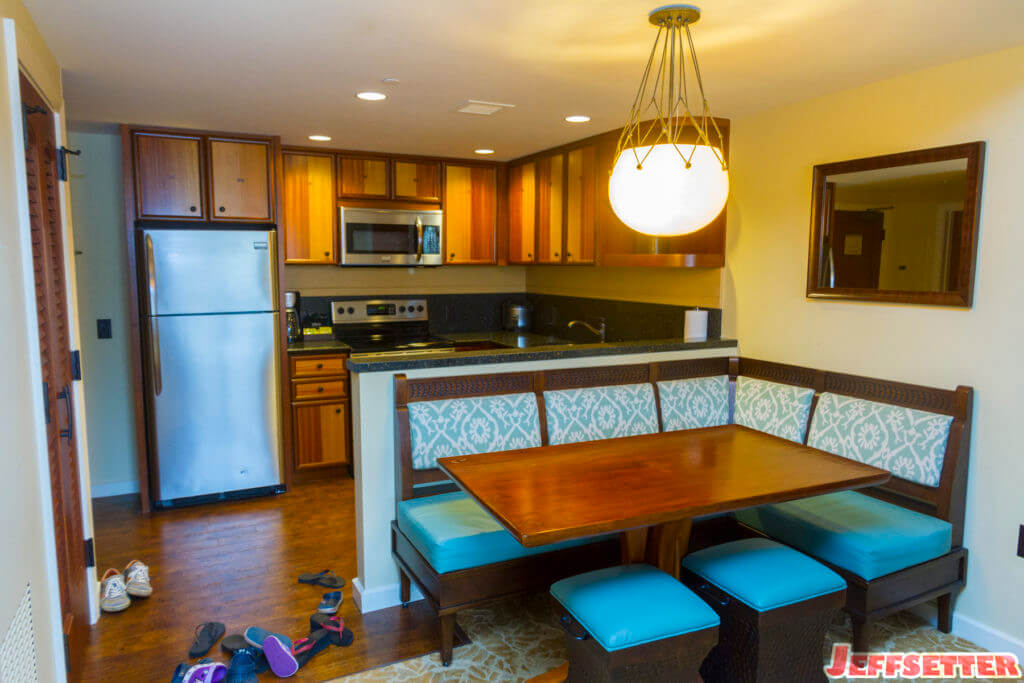 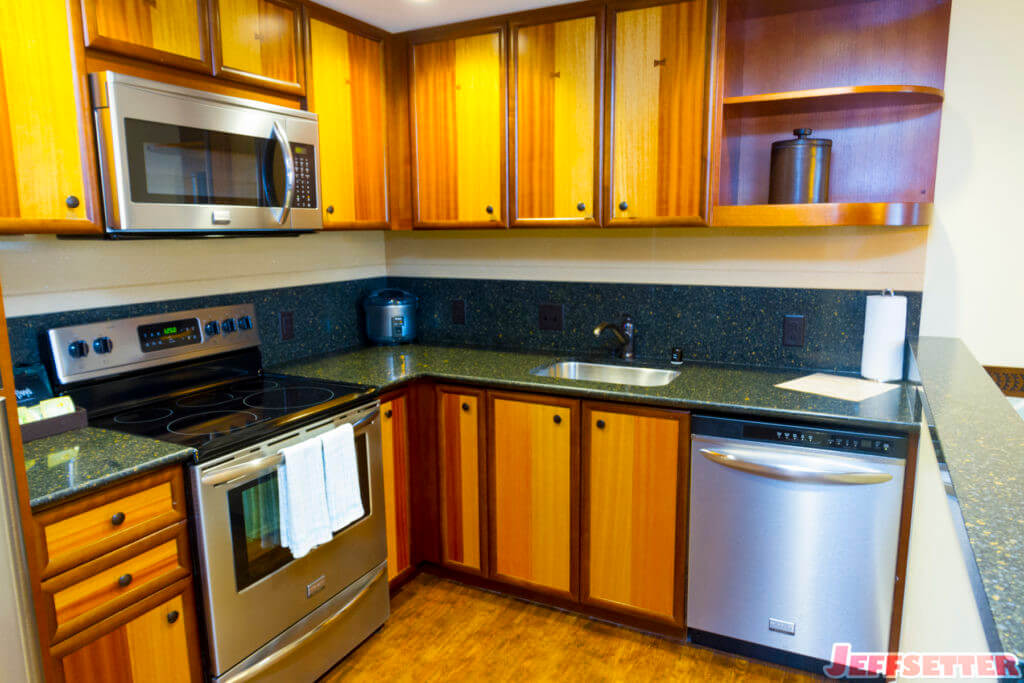 This is the biggest difference when moving from the studios to the villas, a full kitchen with dining space.  In addition to what you get with the kitchenette, you get cookware, a full range, a larger sink, dishwasher,  and a full fridge + freezer.  The cabinet to the left of the kitchen in this picture also contains a full washer + dryer.  There’s also a half bath right off the kitchen as you enter the room.

I wasn’t able to get a shot of the living area, but it does have a sofa bed, a couple of chairs, and the TV, which has a mini bed that folds out below it.

The bedroom of the villas looks similar to the studios except it has a king bed and none of the other furniture.  It does have a TV though. 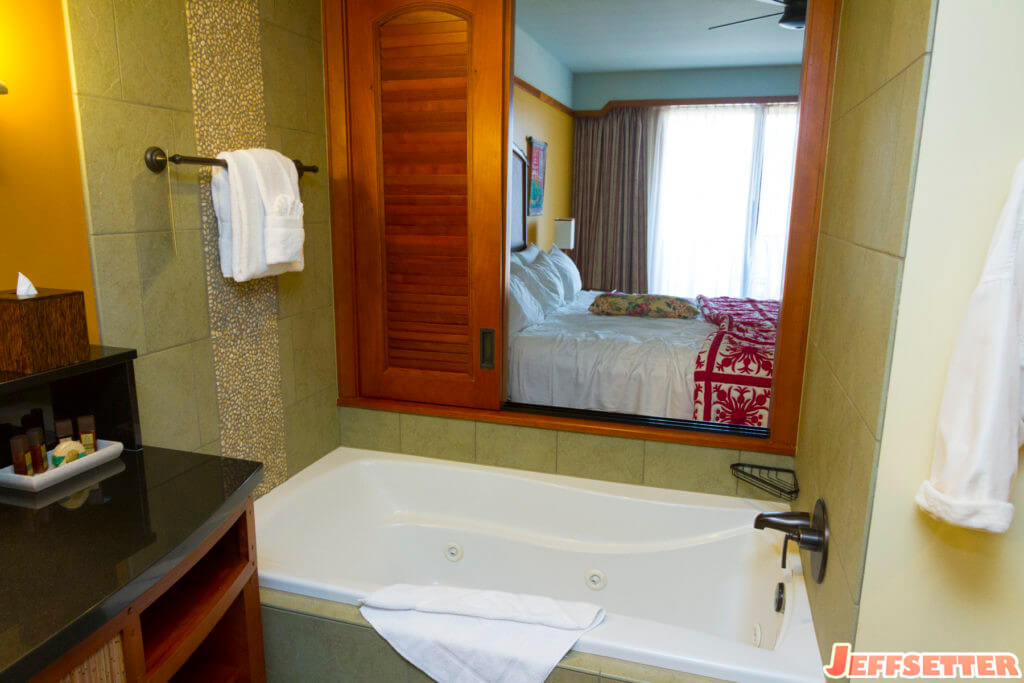 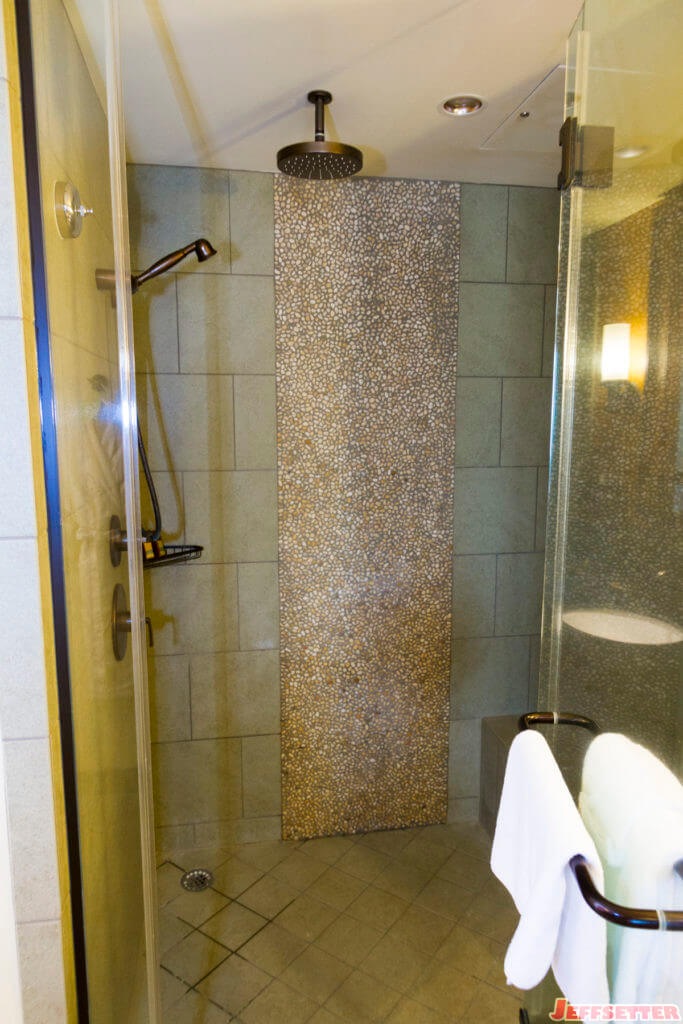 As you can see, aside from the kitchen (and extra space obviously) the biggest difference between the studios and the 1 & 2-bedrooms villas are the master baths.  These baths contain a single vanity, a large walk-in shower, and a jetted tub that opens onto the master bedroom.

Two-bedroom villas also offer two balconies.  The balcony for the master bedroom is private, while the second balcony is shared between the living room and the second bedroom.

The third type of accommodations at Disney’s Aulani are the three-bedroom villas.  These massive rooms contain all of the same amenities of the two-bedroom units, and then some.  The master bedroom and bath are identical between 2 & 3-bedroom units.  Bedroom 2 has two queen beds, its own balcony, and its own bathroom with single vanity and shower.  The third bedroom has two queen beds as well, but shares its balcony with the living room, and its bathroom is across the hall and is similar to the studio bathrooms, but has a dual vanity.  The living space in these room types are also much larger, and has a big screen HDTV mounted to the wall, as well as a wall & ceiling-mount surround sound system.  The dining area, while still integrated to the living space, has it’s own, large dining table with chairs.  Bar seating is also available by the kitchen.

View?  Well, depends on what category you book into.  And even then, as is the case with many hotels, the view you actually get is a roll of the dice.  Sometimes we lucked out with our ocean view bookings. 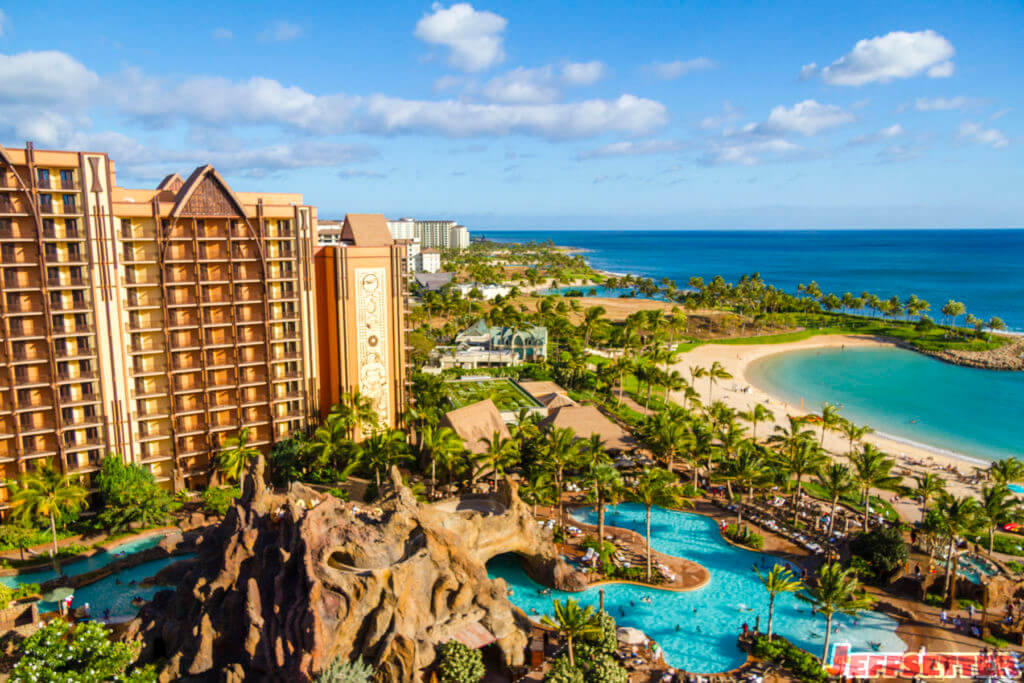 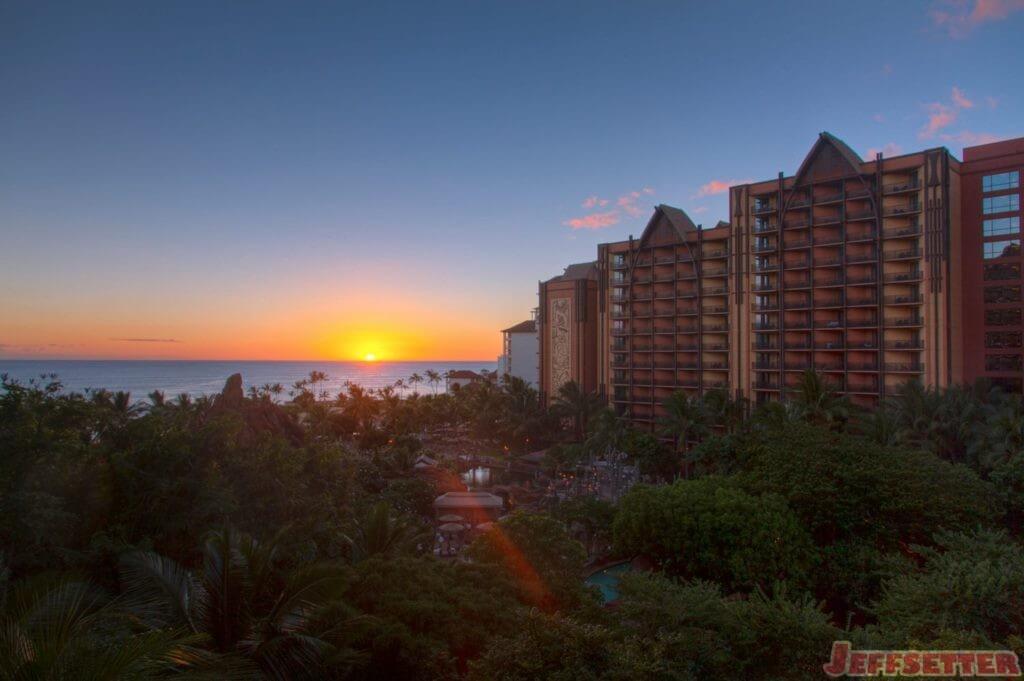 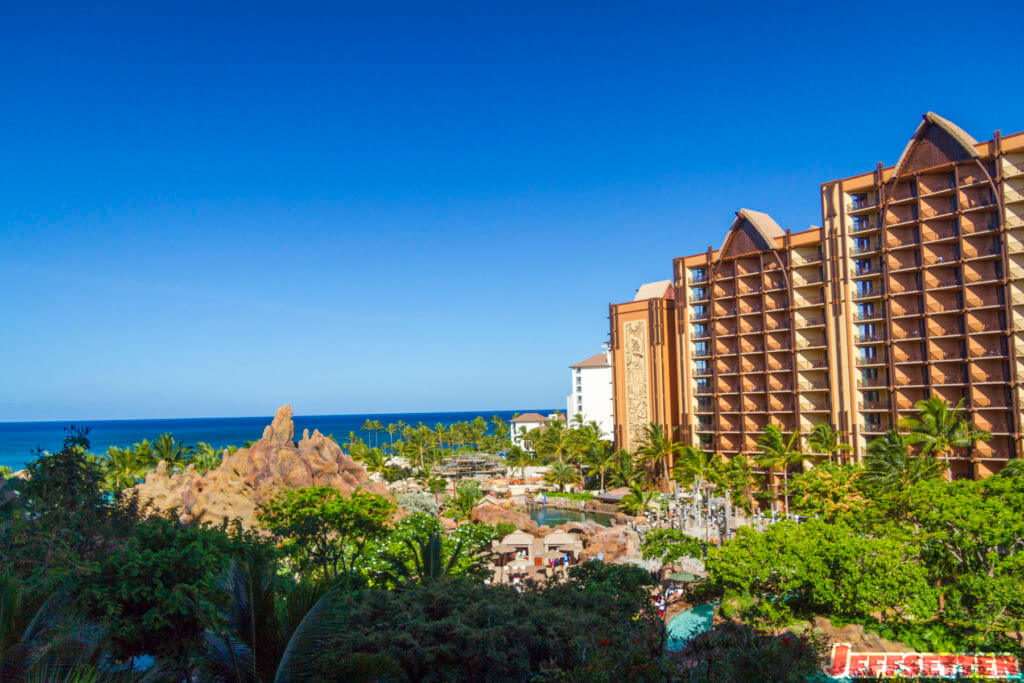 Other times, you may get just a sliver of ocean. 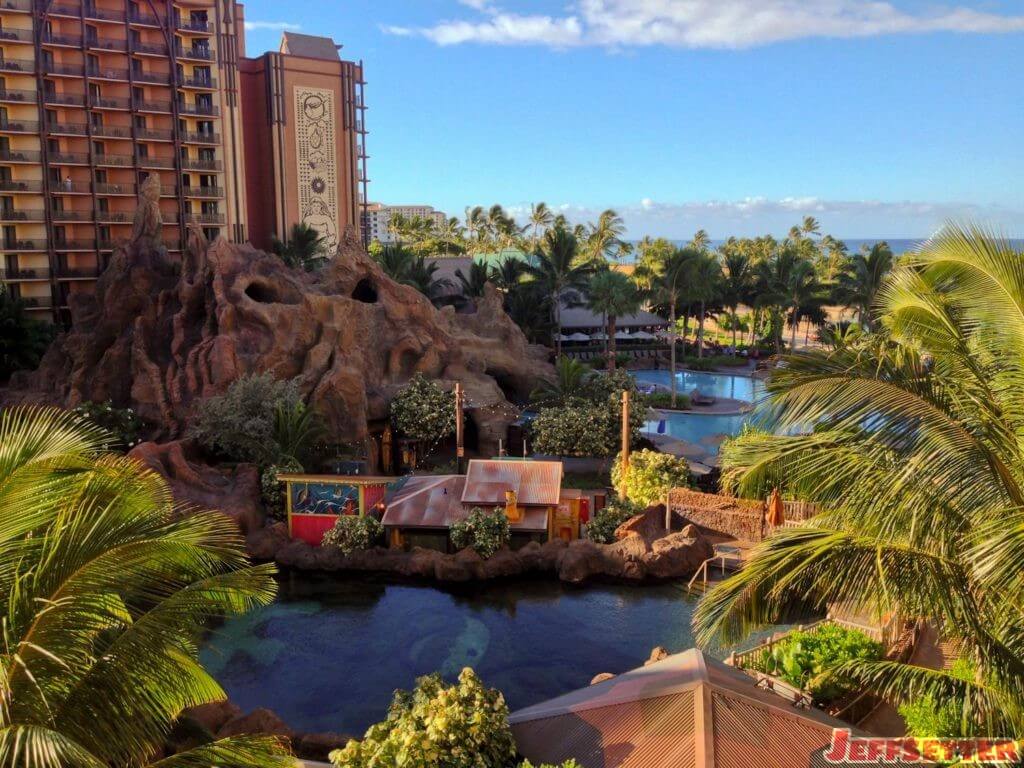 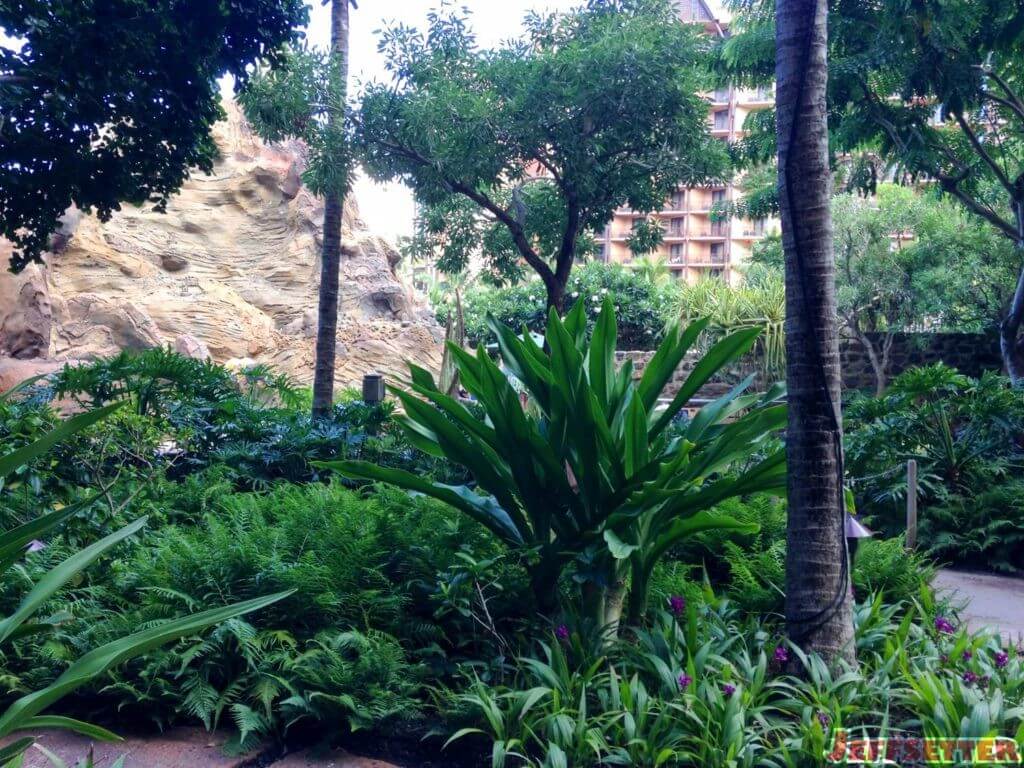 That bottom photo is actually a ground floor room.  It’s pretty awesome, actually, to be able to walk right out of your room and to the pool just steps away, but the idea was better than the execution.  You see, the ground floor rooms have glass sliding doors that lock from the inside only.  The gate from your lanai doesn’t lock either, so if you exit your room from the back, there’s no way to secure it.  If they can figure out a way to solve this problem, these rooms would be super convenient! 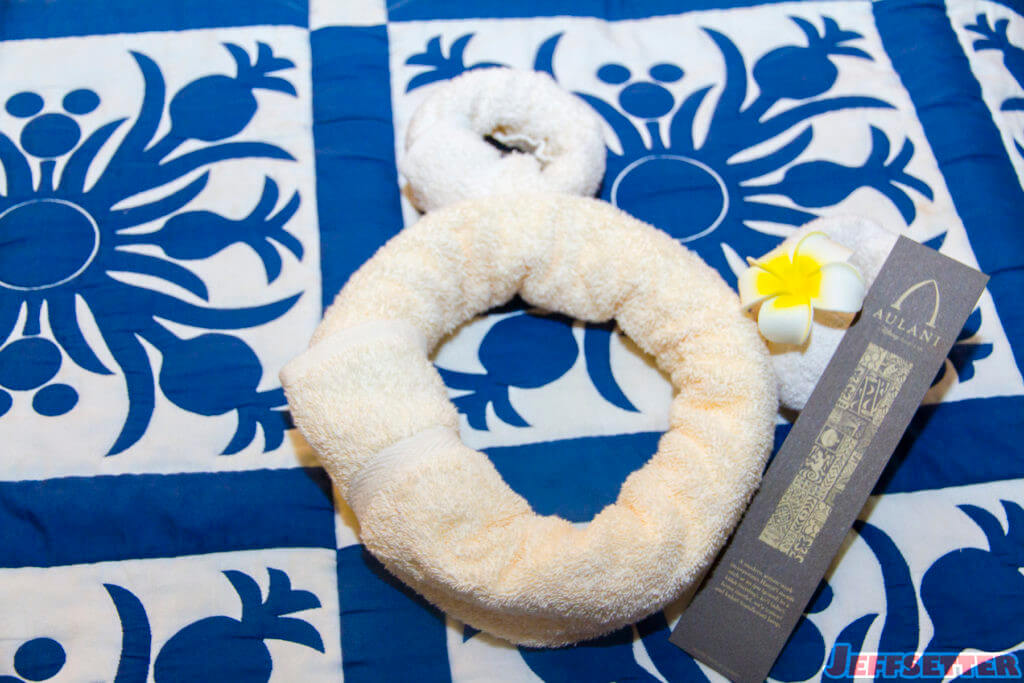 As far as upkeep goes, our first few stays were pretty good, but the resort was brand new at the time.  Over the last few years, the resort has begun to age rapidly.  It’s often crowded, and while there are some really great cast members at Aulani, overall, service is not the same as what you experience at Disney Parks in the U.S.  Unfortunately this is reflected in the cleanliness and upkeep of the property itself.  While our rooms were almost always clean, there were times when the room had grime in the bathroom.  Once I even noticed that the entire room was vacuumed except for under the trash can.  That’s not a big deal to me, but it was very obvious and was kind of funny.  Should have taken a picture… The last few stays we’ve had there, there were also maintenance issues with our rooms ranging from leaking water fixtures, to broken bathroom door latches.

Of course Disney has no loyalty program, so there’s no elite status to rely on for upgrades.  The room you pay for is the room you get.  And with rates often starting around the $400-$500/night price range for a standard hotel room (not the above DVC units), it isn’t cheap.  BUT, unlike most resorts in the islands, Aulani DOES NOT charge a resort fee.  The only extra charge as a hotel guest would be $37/night for parking, regardless if it’s self or valet.  Like I said before, though, self-parking is free for Disney Vacation Club members.  Oh, and if you have little ones, Aulani does offer complimentary, on-site daycare that I hear children actually love.  I have friends that have said their kids cried because they didn’t want to leave! 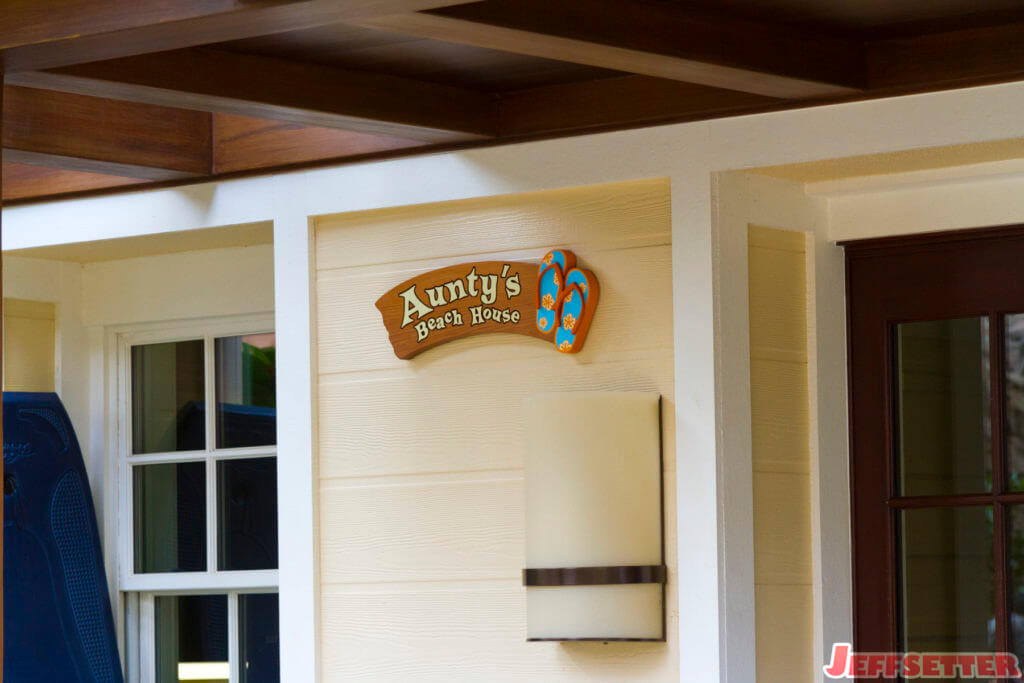 And if you’re looking to earn some kind of return on your Disney Hawaiian vacation, then there are some options for you.  Many Disney addicts will likely reach for their Disney Premier Visa Signature, but to me that’s a mistake.  You see the Disney Premier is basically a cash back card that earns 2% cash back at Disney properties, though it earns that return as “Disney Dollars” instead of real cash.  Instead you should use either then Chase Sapphire Preferred (2pts/$), Citi Premier (3pts/$), or Citi Prestige (3pts/$) depending on which program you prefer, Ultimate Rewards or ThankYou Points.