The week I got back from my conference in San Antonio, some friends were getting married on the North Shore of Oahu.  So, Mrs. Island Miler and I decided to make a weekend of it and give the Courtyard Oahu North Shore a try.  And while I knew the some potential pitfalls going in, it didn’t quite prep me for our experience.

The Courtyard Oahu North Shore was the newest Marriott property on Oahu until The Laylow opened its doors.  It’s, as its name suggests, a limited service Courtyard hotel, which very closely follows a standard design concept.  This property, however, was built in-part as a training center for BYU Hawaii’s Travel Industry Management program.  That’s all fine and well if things are executed properly, but as you’ll see, this isn’t the case.

Aside from being one of only two hotels on Oahu’s North Shore, one reason I wanted to stay at the Courtyard North Shore was to compare it to the Turtle Bay.  As you may recall, I wasn’t all that impressed with the stay I had there last year.  The overall experience was pretty underwhelming and prices on-property are exorbitant, even for a hotel.  And like most full-service properties in Hawaii, Turtle Bay charges a $40/night resort fee, which can have a big impact on your nightly rate.  The Courtyard, on the other hand, doesn’t, so the value there should be better, right?  Sometimes yes.

When check-in became available on the Marriott App, I checked-in indicating an arrival time of about 1:00 pm.  On check-in day, we arrive at the Courtyard Oahu North Shore and park in the stalls fronting the lobby.  It’s already 2:00 pm, but I hadn’t received any notifications regarding my room.  So I approach the front desk to see what the status of my room is. 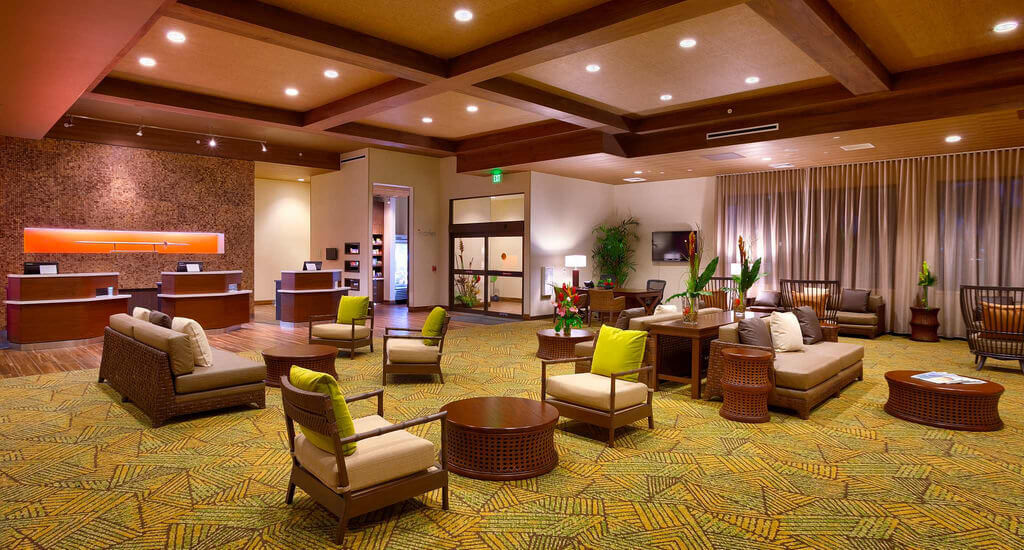 Only, the two associates working the front desk at this time were chatting away.  And when I approached, they gave me a stink look as if I were disturbing them.  One associate did end up assisting me, though she did so rather rudely.  She informed me that my room would be ready until 4:00 pm at the earliest, which is the property’s standard check-in time.  That seems rather late for a standard check-in time, but whatever.

I inquired if anything else might be available sooner, as we had a wedding to attend at 4:00 pm, and she simply stated that the property was at capacity.  So I’m guessing just a single guest was checking-out that day then?  And that one guest had late check-out?

Of course the associated didn’t offer to use other facilities or to store our bags.  And I just loved her attitude…  I suspect these associates were likely students, and if that’s the case, where’s the supervision?  And if these associates weren’t students, that’s even more alarming.  Not a good first impression at all.  With no other option, I walked out and Mrs. Island Miler and I headed over to the Turtle Bay for the wedding.

Thankfully, by the time we returned around 9:00 pm, a different associated had taken over.  This lone associate was busy handling another guest that was unhappy about his room and didn’t seem to like the fact that they were unable to accommodate his request.  And despite this, when the other guest finally left, this associate apologized profusely for the wait and greeted us warmly.  She very quickly processed our check-in, issued our room keys, and took some time to explain all of the features of the property.  What a night and day difference!

Oh, and remember those stalls in front of the lobby?  Those aren’t for overnight guest parking, but they were all occupied when we arrived to check-in that night.  This forced me to leave my car in the port cochere during check-in, as the guest parking lot is not accessible without your room key.  So once we were checked-in, we went back out to the car, drove it to the guest parking lot, and unloaded from there.  I probably could have left my car in the front, though, as it doesn’t appear to be monitored at all.  And the fact that they even charge you $10/night for parking in their uncovered lot in the middle of nowhere is kind of absurd.

The accommodations at the Courtyard North Shore are what you’d expect.  They stick pretty close to the newer corporate design, with some unique touches.  Our room was a base, two queen-bed room, though we were given a nicer view.  Our room, however, was a connecting room, so upon entering the room, the connecting door was located to the left, while the bathroom and closet were on the right. 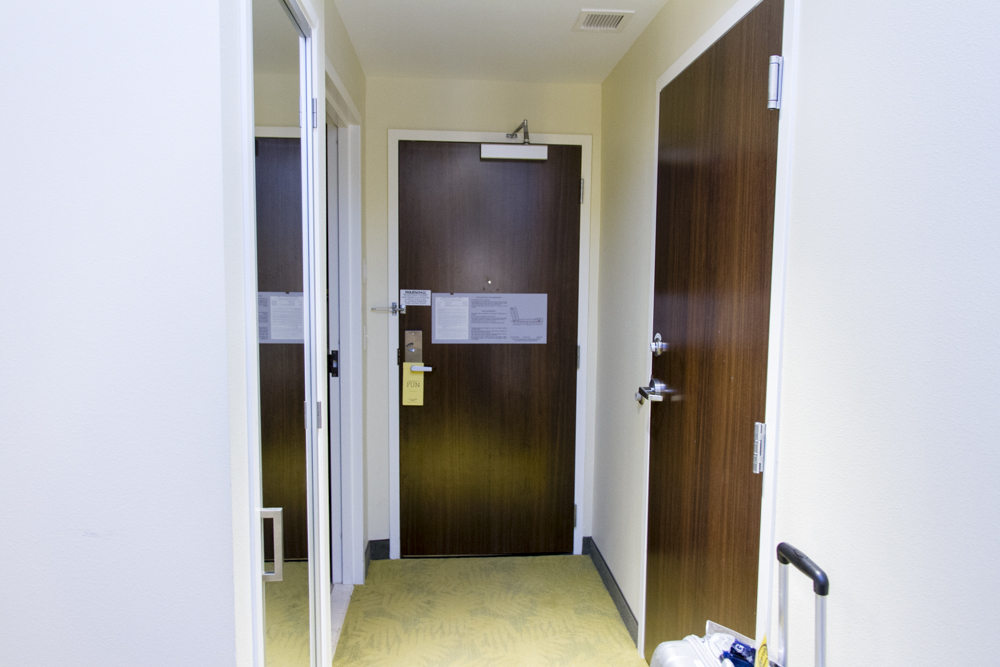 The bathroom is the standard Courtyard variety with a shower/tub combo and a nicely sized vanity. 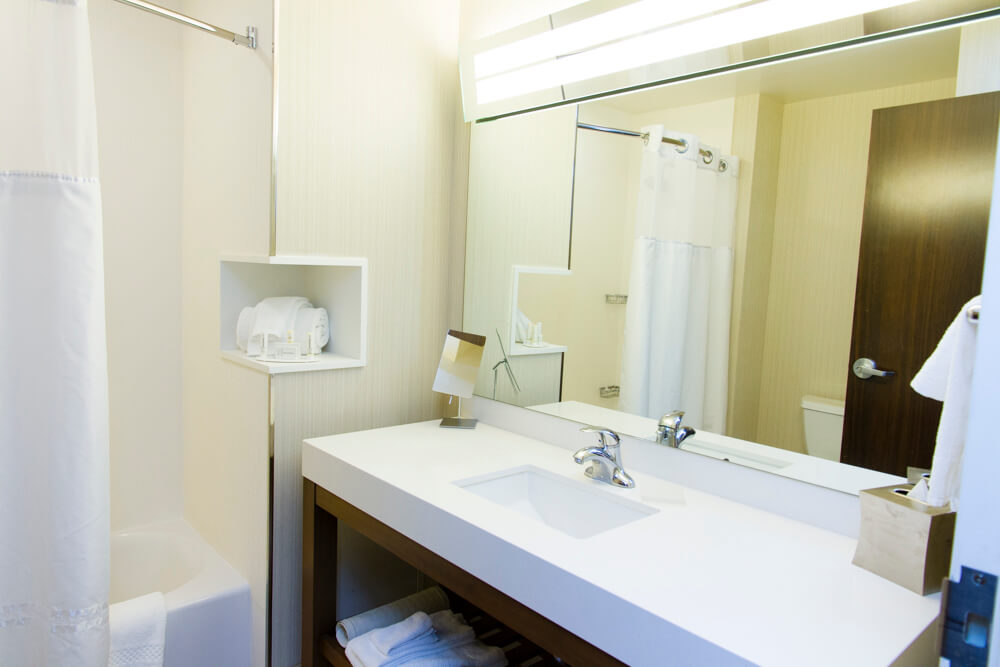 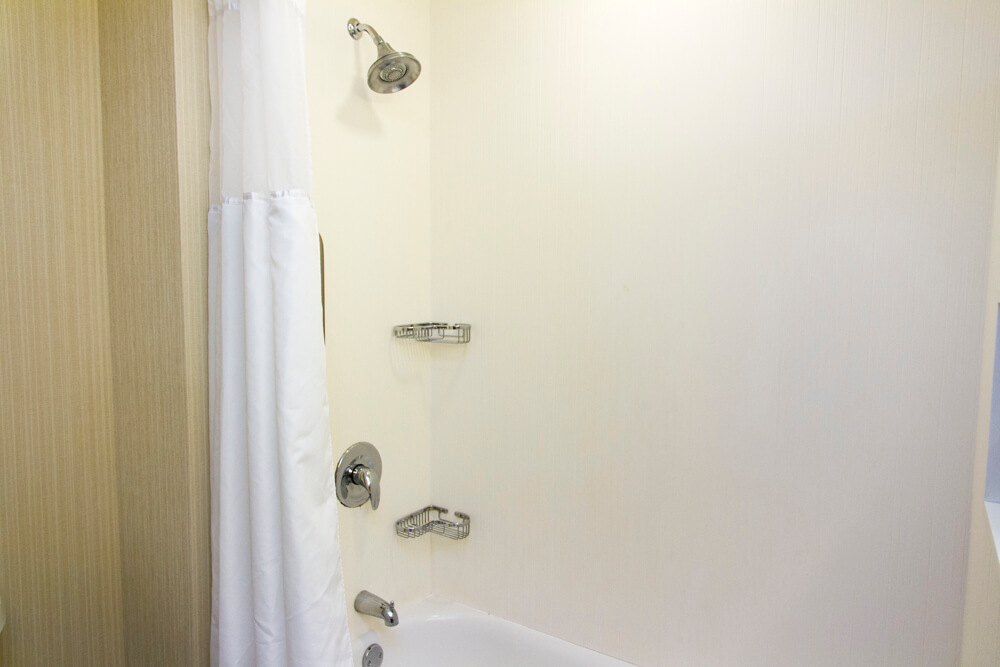 I would have preferred a shower stall like the Courtyard Kahului Maui Airport, but it is what it is.  One thing I did find odd, however, was the location of the towel racks.  They’re located on the opposite side of the toilet from the shower, requiring you to reach over to get it. 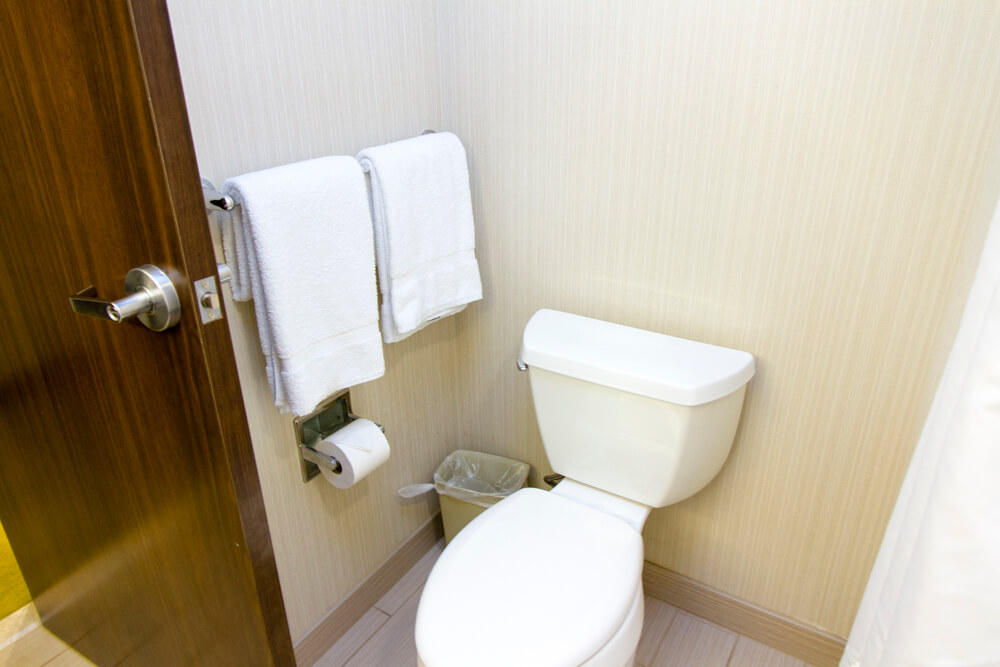 I mean, I suppose you could use the little alcove next to the shower to store a towel, but it isn’t as convenient, especially if there’s two of you.  And per the usual, the toiletries were the standard (but nice) Paul Mitchell variety. 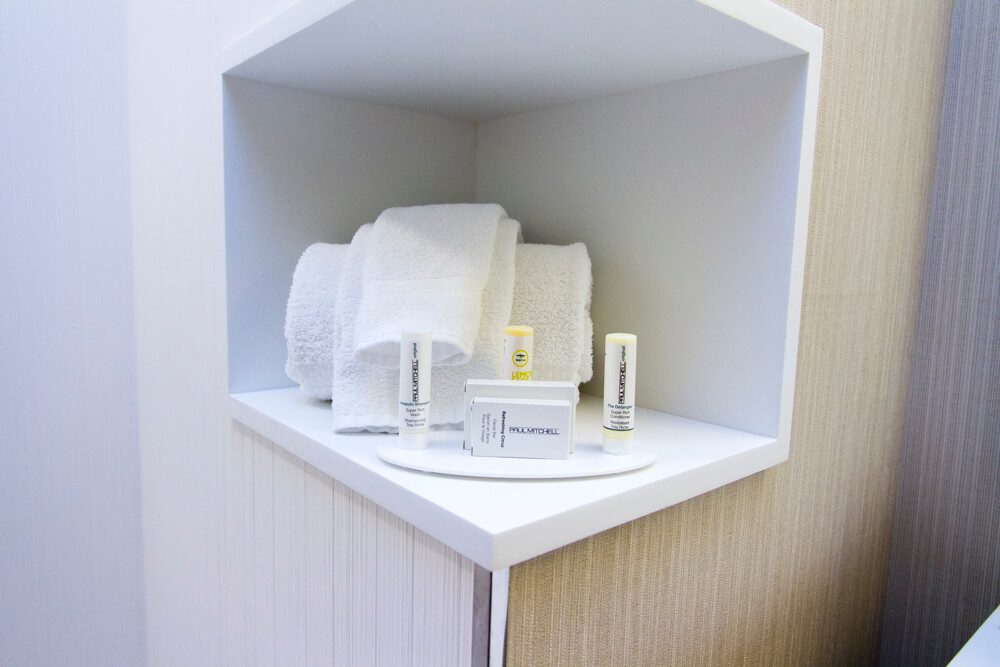 The closet was your standard variety closet, though on the smallish side.  It contained some extra bedding, the iron, and ironing board. 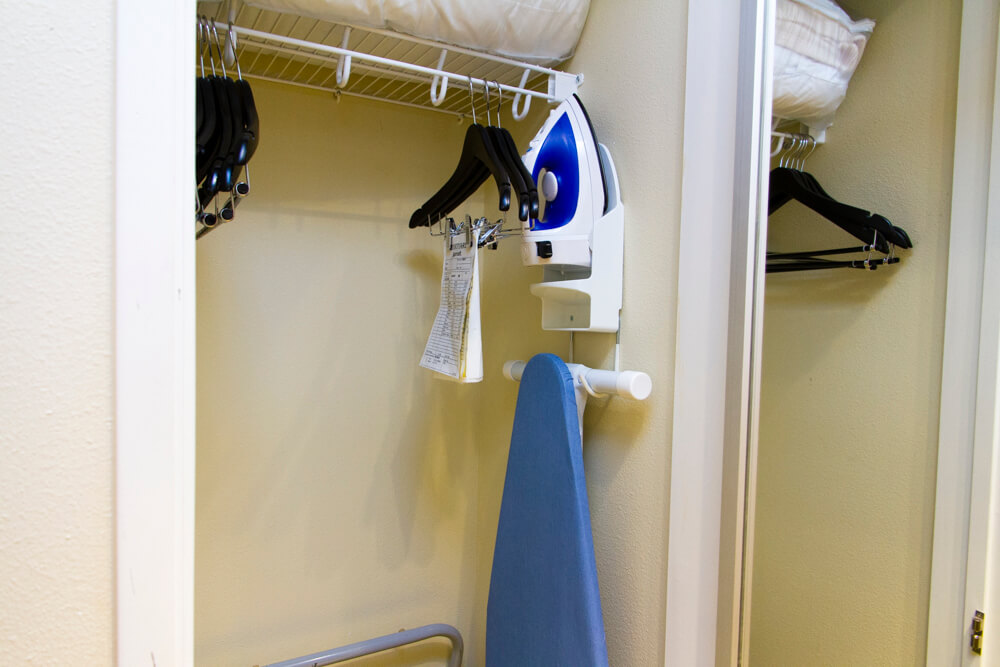 As I mentioned earlier, our room was the base room, which comes with two queen beds. 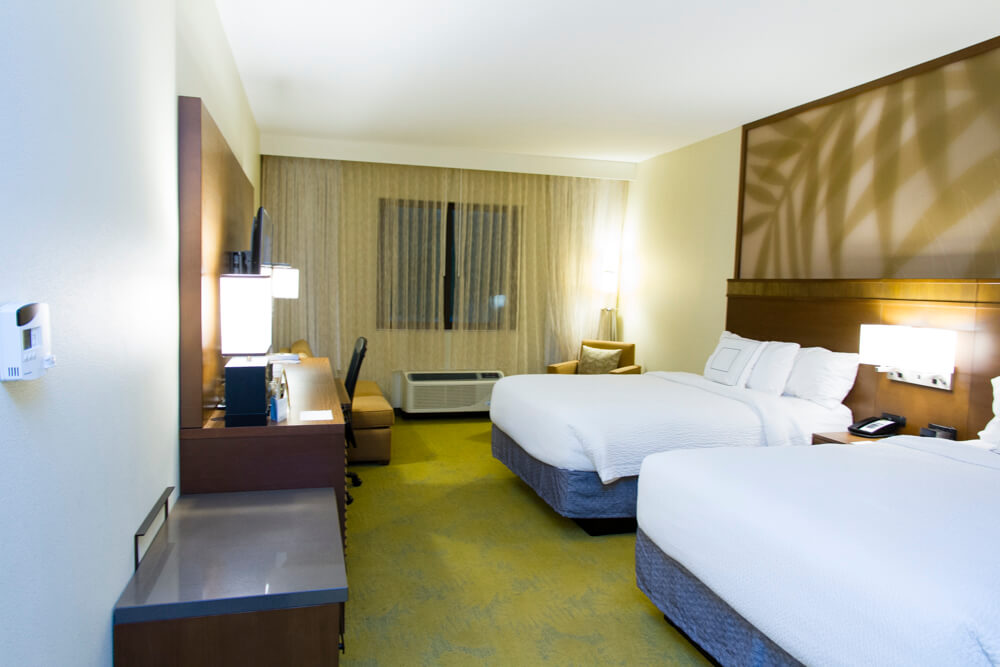 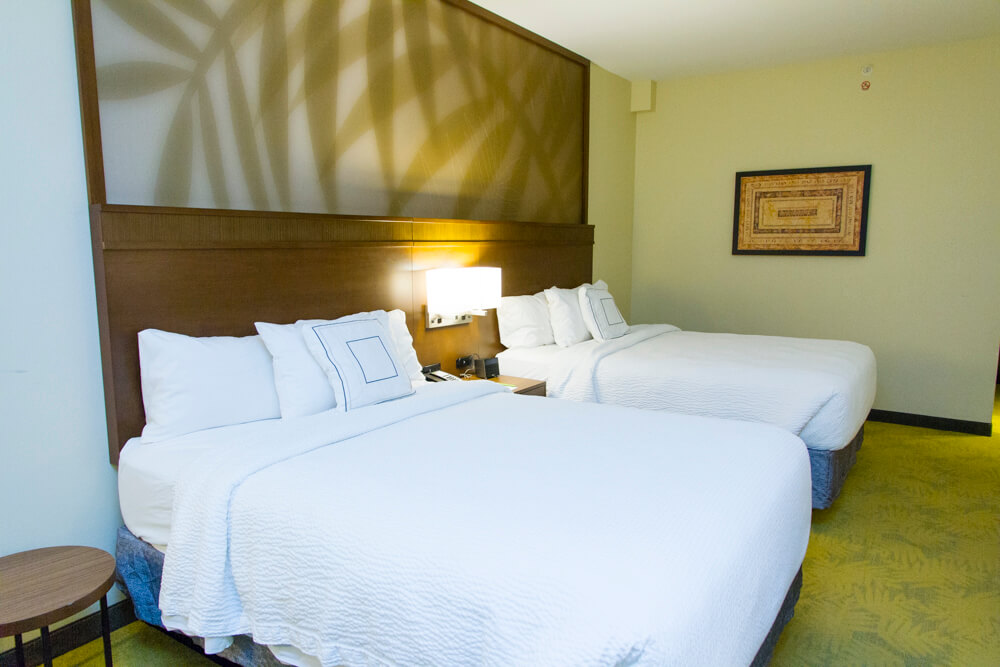 It’s interesting that the base room features two queen beds.  Most Marriotts in Hawaii charge extra for this.  The beds were separated by a nightstand with a phone and radio/alarm clock. 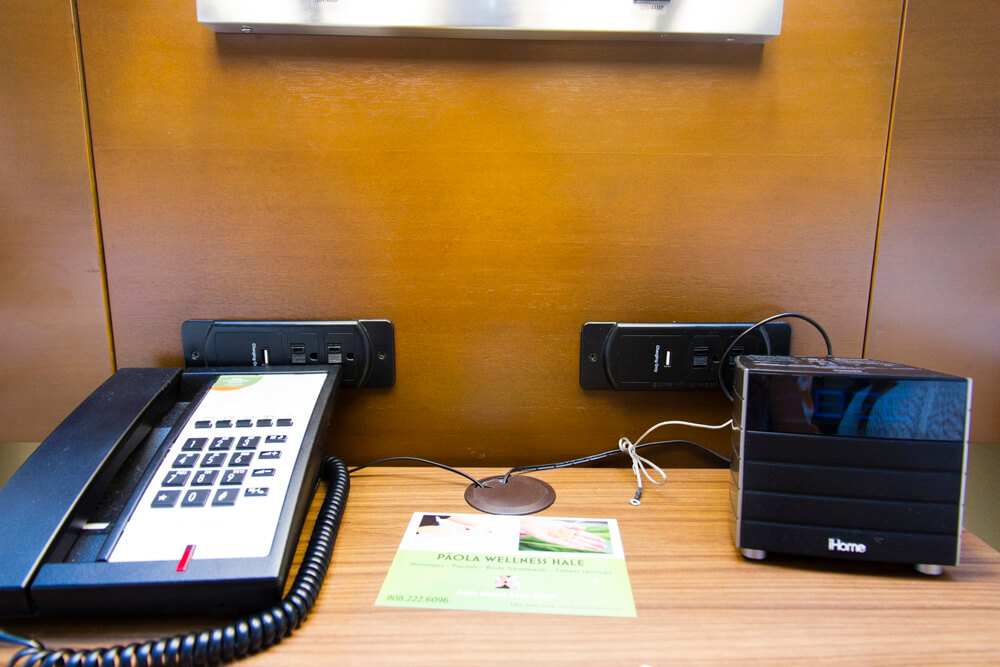 In the corner nearest the beds by the window was a chair with an ottoman. 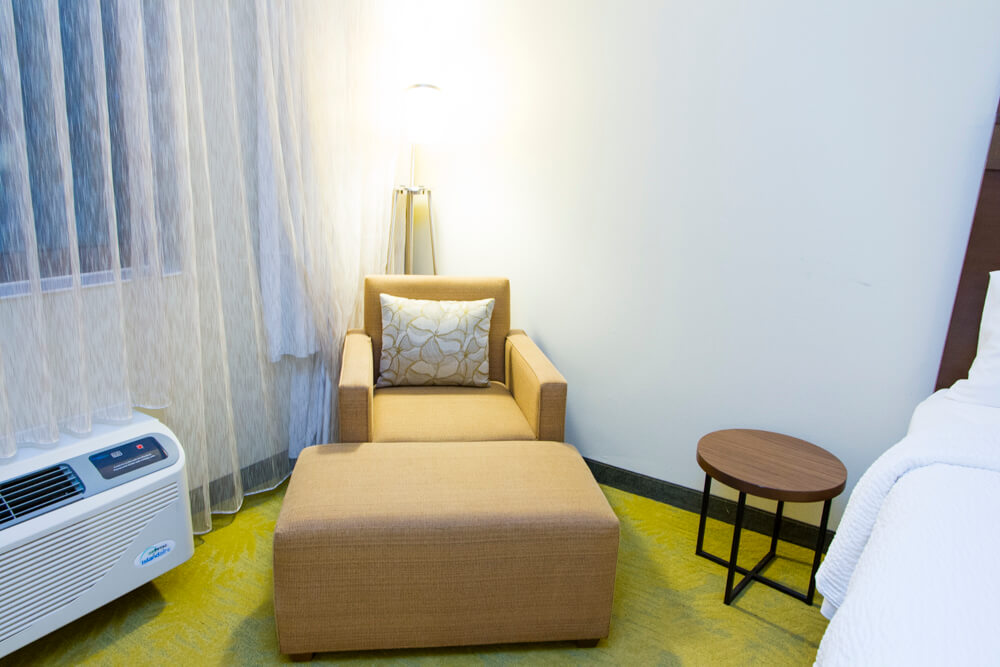 Across from the bed was the desk, sofa, dresser, and TV. 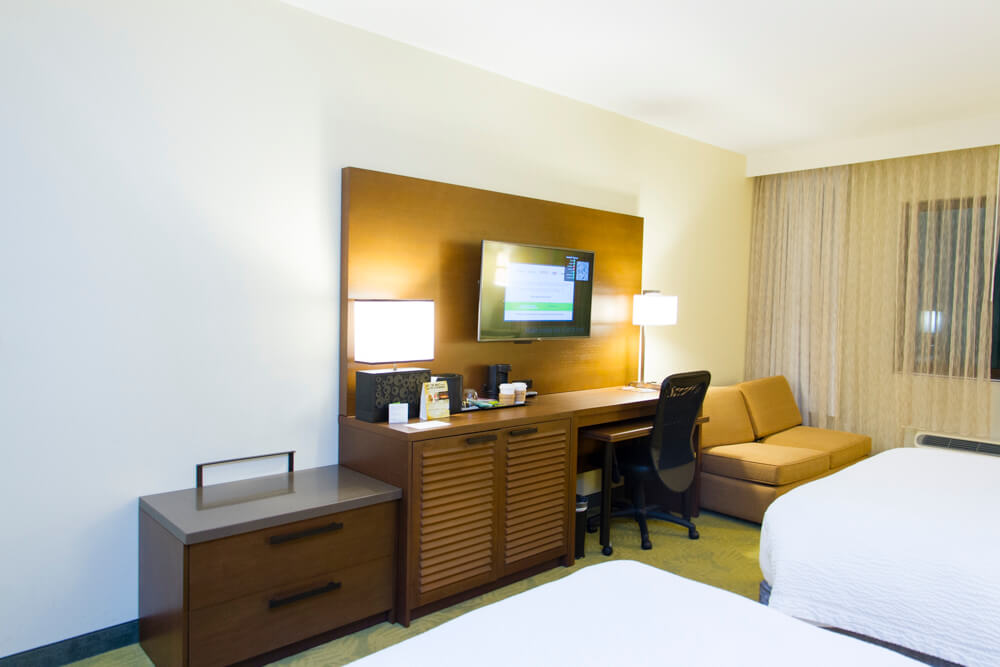 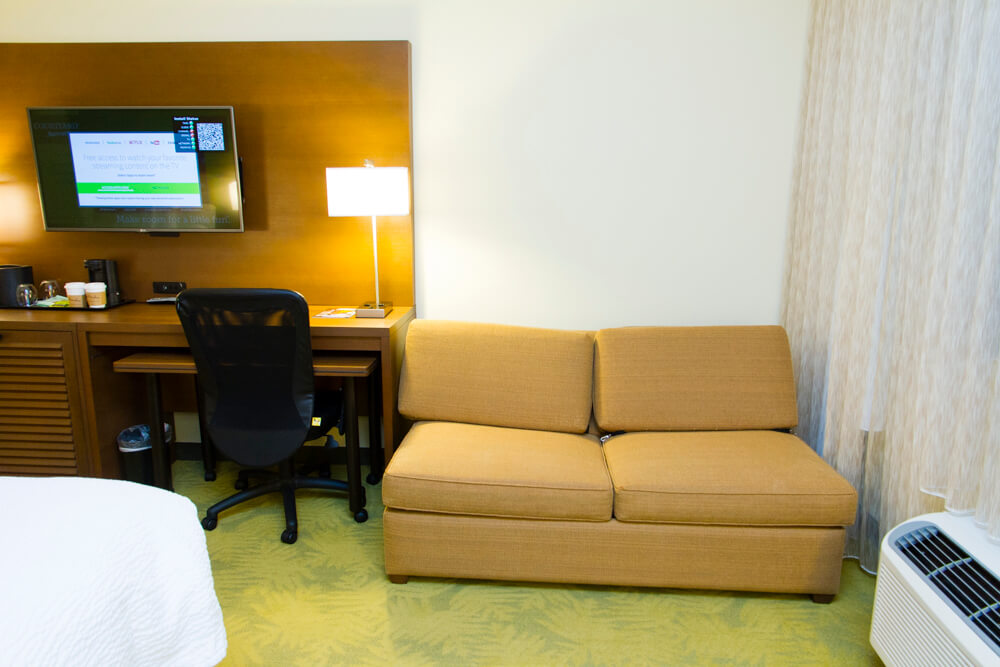 On the desk was the coffee maker, cups, and ice bucket. 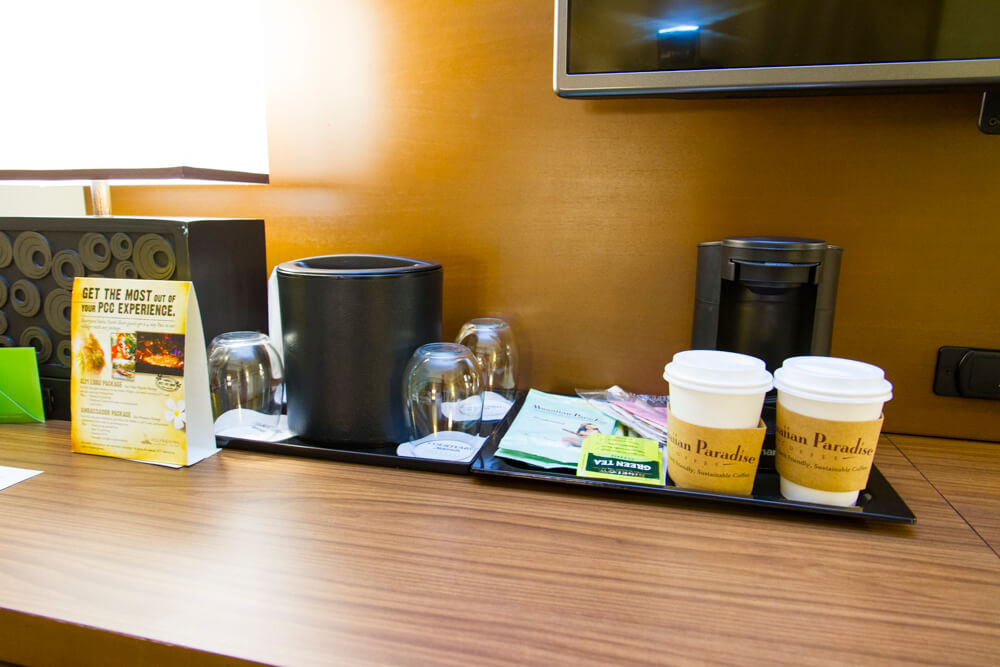 And immediately below that was the fridge. 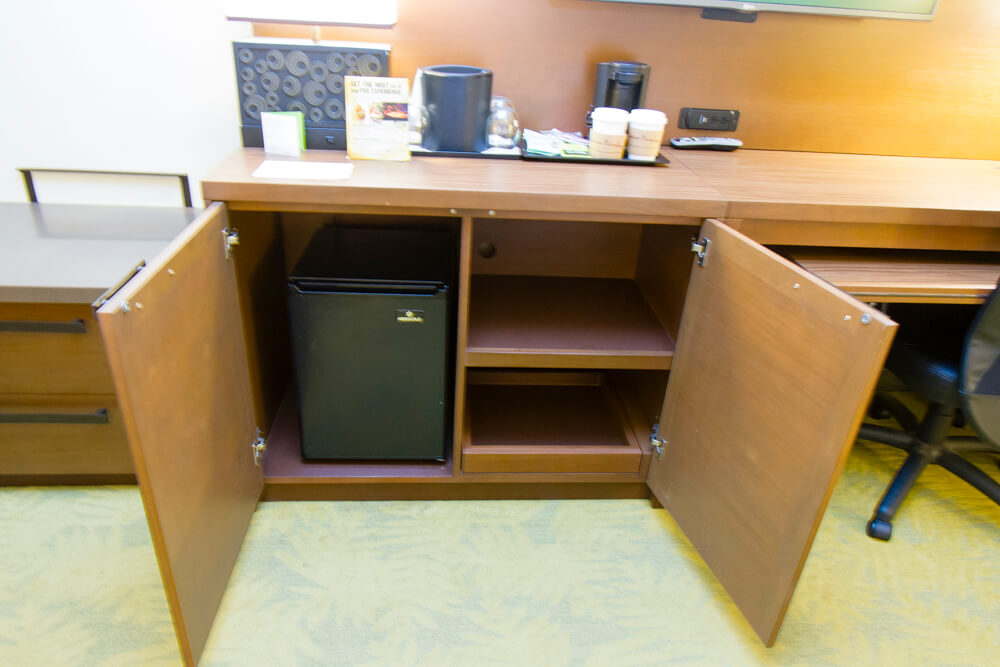 The Courtyard North Shore isn’t in the greatest location.  It’s near the ocean, but not on a beach.  And its two neighbors are the Polynesian Cultural Center and a McDonalds.  So two of your view options are the McDonalds or a parking lot.  In the rear of the property is a large pool, which wouldn’t be a bad view to have.

Or you could get the ocean facing view we had. 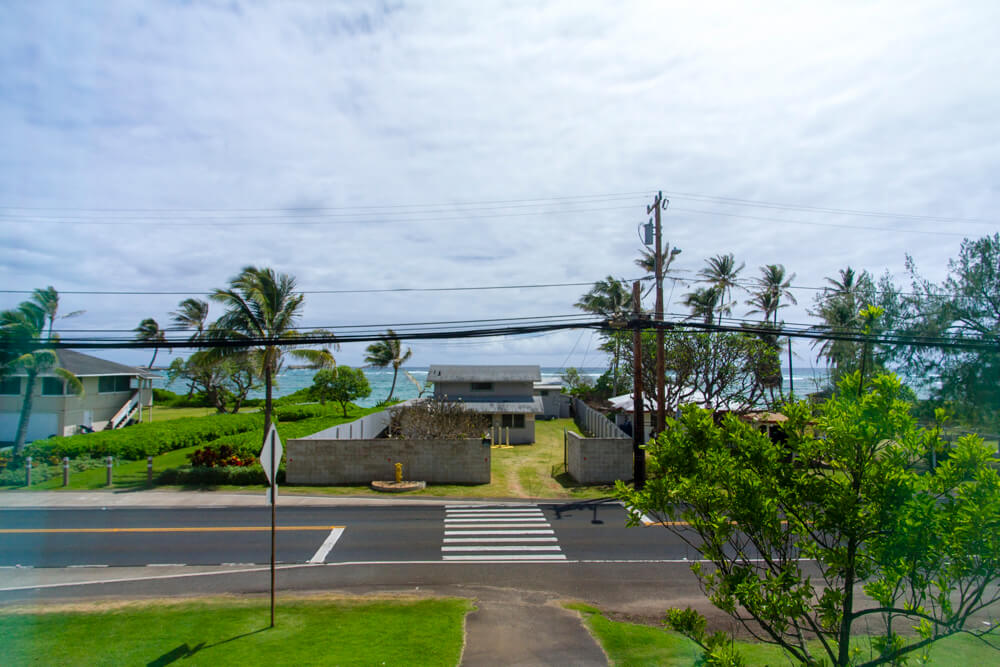 The view isn’t exactly an ocean view.  But a view of the street with a house and the ocean in the distance is better than a parking lot view.

Being a Courtyard, the Courtyard Oahu North Shore has the standard variety of amenities typical to the brand.  The expensive lobby features a Bistro, Market, a business center, and some “media pods.”  The property also has meeting facilities, a small gym, and a large pool area.

I really wanted to like the Courtyard Oahu North Shore.  And while there were some good points about it, such as the fantastic associate that helped us the second time we checked in, it isn’t enough.  I found the property to be rather underwhelming for the price.  And I’m no fan of Turtle Bay either, so my recommendation if you want to stay on Oahu’s North Shore is to look into an Airbnb instead.  There are some nice properties at prices comparable to the Courtyard, and some are even on the beach!