Great news!  Activity in Kilauea’s east rift zone has ended, and along with it, the destructive activity at Kilauea’s summit.  And, as a result, the Hawaii Volcanoes National Park will reopen soon.

Back in May, Hawaii’s Kilauea suddenly came alive.  Its new activity along the east rift zone was fantastic and destructive all at once.  Not since the 1950s have we seen this kind of activity from the volcano.  Curtains of lava and large lave fountains broke out along the east rift zone, which eventually centered its activity around Fissure 8.  There, a new cinder cone formed in what was once a quiet residential neighborhood and sent lava flows down to the ocean.  And while the eruption caused much destruction to communities and natural treasures, it also created acres of new land.

But while the eruption was awe-inspiring, it also, ironically, caused the closure of Hawaii Volcanoes National Park.  The closure wasn’t because of the eruption itself, but due to the draining of Kilauea’s magma chamber.  This draining action eventually caused magma to dip below the island’s water table, which triggered steam explosions and earthquakes.  This volatility, of course, made the Park a dangerous place to be, prompting officials to shut it down.

No one knew when activity at Kilauea would cease.  Scientists thought the eruption would last anywhere from days to years.  But it looks as if the eruption ended up lasting only three months, we think.  And that’s because, though activity has ended, it could restart at any time.  However, at current, there are no signs that activity will recommence.  So, because of this, the Hawaii Volcanoes National Park has committed to reopening on September 22, 2018, which is National Public Lands Day.

Between now and then Park officials will be evaluating its facilities, which were damaged by the numerous earthquakes that occurred throughout the eruption.  Roads will need to be repaired, while vital services like water must be restored throughout the park.  Some areas, though, may not be salvageable and will not reopen.  Further, some areas may remain closed longer than the rest of the Park due to safety concerns or the need for repairs.  And, of course, the reopening of the Park could be further delayed due to unforeseen damage or even a resumption of activity.

While Volcanoes National Park will reopen, the Park will forever look different.  Take, for example, Halemaumau Crater.  The summit caldera collapsed in on itself thanks to the draining of Kilauea’s magma chamber.  And the seismic activity around Kilauea’s summit caused further collapses at the crater too.  So what once looked like this: 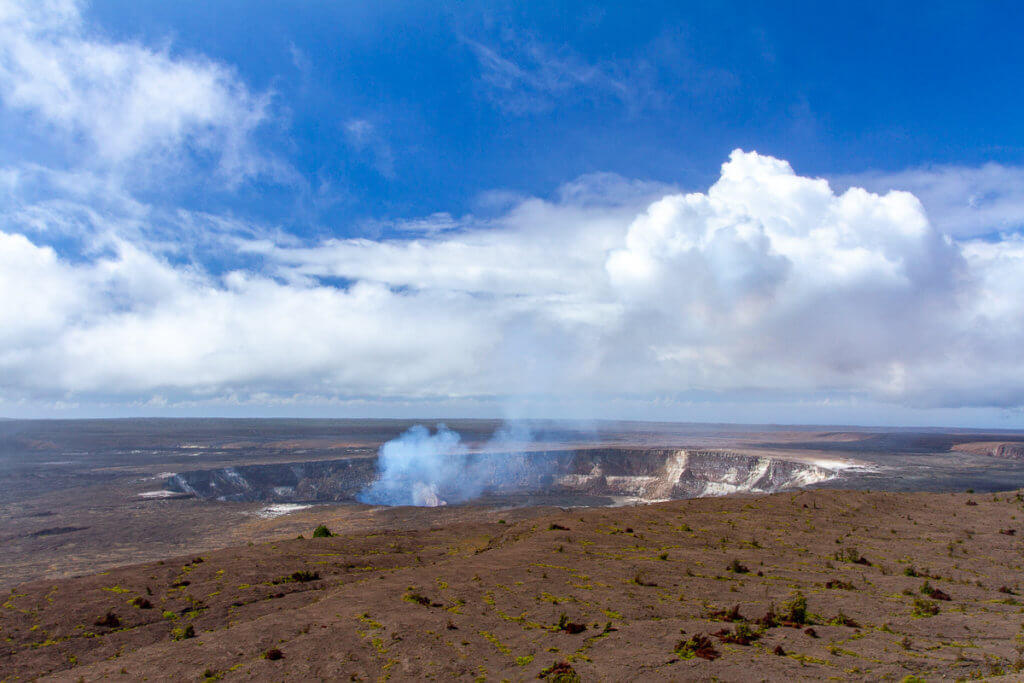 See the building and parking lot on the right side of the photo?  That’s where I was standing to take the first photo.

I’m so happy that Hawaii Volcanoes National Park will reopen soon.  It’s a fantastic place to visit and is someplace I enjoy exploring.  More importantly, though, it’s the number one attraction on the island.  And since its closure back in May, the economy on the island has tanked.  So, hopefully, the island will be able to begin its recovery.  The Big Island can get all the love it can get after its issues with the volcano, Hurricane Hector, and Hurricane Lane.