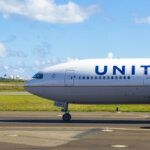 Last week, Alaska Airlines announced schedule cuts due to labor shortages. This time, it's United's turn. Their issue is a bit different, though. Rather than a labor shortage, an aircraft shortage is hampering operations, and, as a result, United cuts three Hawaii routes. … END_OF_DOCUMENT_TOKEN_TO_BE_REPLACED