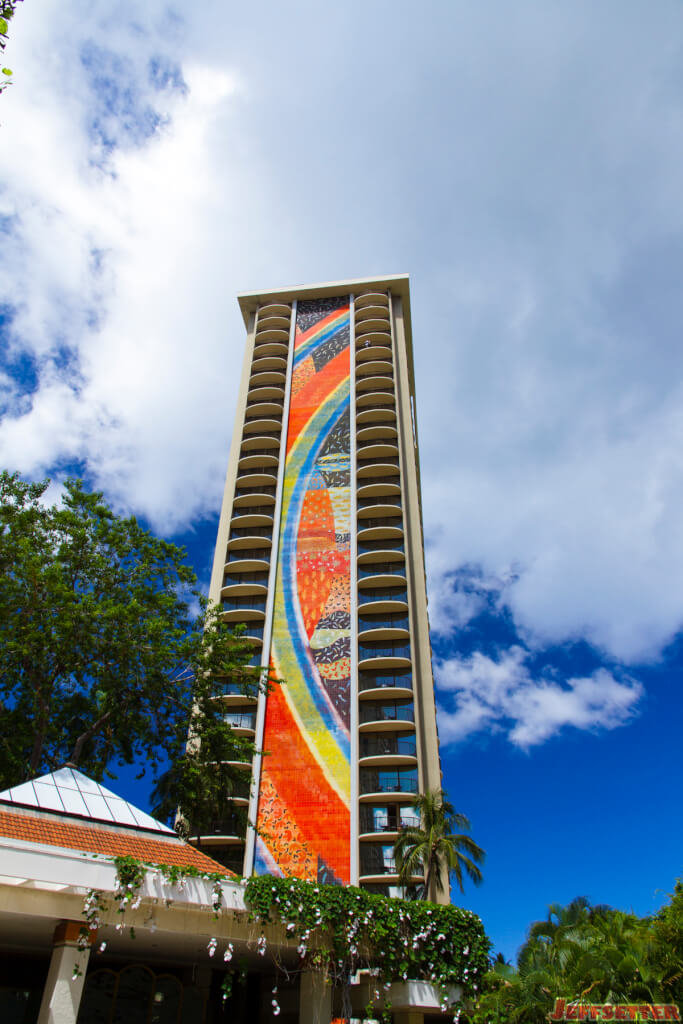 A History of Expansion

The original hotel was originally pieced together by Henry J Kaiser in 1954 by combining the Niumalu Hotel, and a collection of thatched-roof cottages.  The hotel opened in 1955 as the Hawaiian Village, which it would remain for a number of years.  Two years later in 1957, the Ocean Tower and the Geodesic Dome were added to the property.  Then in 1961, Conrad Hilton bought half the resort.  That same year, his company, Hilton Hotels & Resorts, assumed management of the property and renamed it the Hilton Hawaiian Village.

It would be another seven years until the next tower would open.  In 1968 the resort’s iconic Rainbow Tower (pictured above) opened, and would be the last for over a decade.  Then, in 1982, the Tapa Tower was added, while the Ocean Tower was gutted and renovated in 1987, then renamed as the Ali’i Tower.

Nearly 20 years would pass again before the next new addition, this time being the Kalia Tower, which opened in 2001.  The last tower to open was the Grand Waikikian (a Hilton  Grand Vacations property) in 2008.  Today, the property is composed of seven towers, including the:

The Geodesic Dome was demolished in 1999 to make way for the Kalia Tower, and various other upgrades (pools, chapels, etc) were also added in recent years.

2017 will see yet another tower open at the Hilton Hawaiian Village.  The Grand Islander, a Hilton Grand Vacations property, is set to open in late February/early March of this year.  And yet, the resort’s owners area already discussing it’s next new project.  According to the Pacific Business News, Park Hotels & Resort, Inc., a property investment division of Hilton Worldwide Holdings, Inc. is pondering its next move.  Under consideration are luxury hotel, time-share, or residential project.  This new development would be located at the “Ala Moana Parcel” between the Grand Waikikian and Kalia Towers. 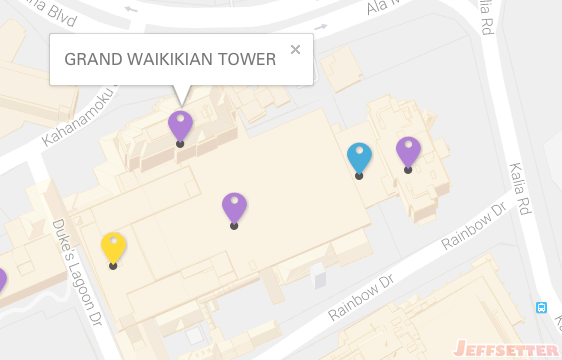 I’m not sure exactly where the play on putting this new tower, as the purple dot on the far right of the above map is the Kalia Tower.  I suppose that means the new tower will be built along Ala Moana Boulevard near the Grand Waikikian Tower.  Or it could be built atop the parking structure and ballrooms, too, but I doubt that.

It’ll be interesting to see what ultimately is developed at the HHV.  I’m hoping it’ll be a hotel, as Hawaii has seen many hotel rooms converted into timeshare units.  But if I had to make a bet, I’d bet Parks Hotel will develop yet another Grand Vacations tower here.

At it’s present size, the Hilton Hawaiian Village has about 2,860 rooms.  The Grand Islander will add another 418 rooms, bringing the total to 3,270.  How many more rooms this new development will add to the 22 acre property is anyone’s best guess.  But it begs the question… How much is enough?  The property already felt really crowded the one time I stayed there.  But unlike many Marriotts, they still managed to upgrade me to an amazing room without asking.  And the HHV has been operating at around 95% occupancy, so there definitely is room for growth.

What do you think?