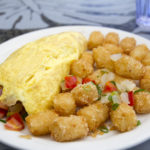 Hawaii has an obsession with breakfast and brunch.  Why?  I don't really know.  What I do know is that some of our favorite dishes are primarily breakfast foods.  Think local style (Japanese-based) fried rice, loco moco, and corned beef hash.  And one of the very first restaurants dedicated to brunch was Cinnamon's in Kailua.  Nearly two years ago Cinnamon's opened a second … END_OF_DOCUMENT_TOKEN_TO_BE_REPLACED