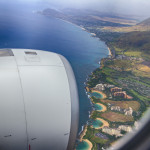 Flying economy in the U.S. has long meant no meal service.  Period.  However, that trend has slowly begun to change this year. Up until recently, Hawaiian Airlines was the only domestic carrier still offering complimentary meals in all cabins.  Then, back in February, American announced that it would offer meals on Hawaii flights.  Recently, rumors have been emerging about … END_OF_DOCUMENT_TOKEN_TO_BE_REPLACED