The first of two hotels we stayed at during my First Las Vegas Adventures was the SLS Las Vegas.

During my First Las Vegas Adventure, we chose to stay at two hotels.  I don’t usually like changing hotels, especially since we were in Vegas for only five nights.  However, we did this to minimize our lodging expenses, and to try different properties.  And of course the first property we checked into was the SLS Las Vegas.

Why the SLS Las Vegas?

Honestly, the SLS wasn’t one of the first properties I looked at when searching for hotels.  I really wanted to give The Cosmopolitan a try, but the rates were far too high.  Other Marriott properties around Vegas also had ridiculously high rates or were sold out.  So, I expanded my search and eventually chose the SLS because of: 1) it’s a Starwood/Marriott property, and 2) because of the rate.  Mrs. Island Miler also tends to like modern, somewhat quirky properties, so the SLS seemed like a no-brainer really.  Plus there’s no resort fee or parking fees, so why not?

We drove over to the SLS from the Silvercar facility out near the airport.  It was a quick drive to the hotel on the I-15, but the drive made it readily apparent how far the hotel is from the rest of the Strip.  Located on the far north-end of the Strip, there isn’t much around the SLS except for the Stratosphere and the creepy looking Circus Circus.

Once we arrived, we parked our car in the hotel’s confusing parking structure, took the elevator down, and walked across the porte cochere.  The doors to access the lobby from this area are heavy and difficult to open when you have a few rolling bags in tow.  Despite this, none of the valets or bellmen offered any assistance whatsoever, which I found odd.  Heck, the fact that there weren’t any automatic doors was odd too. 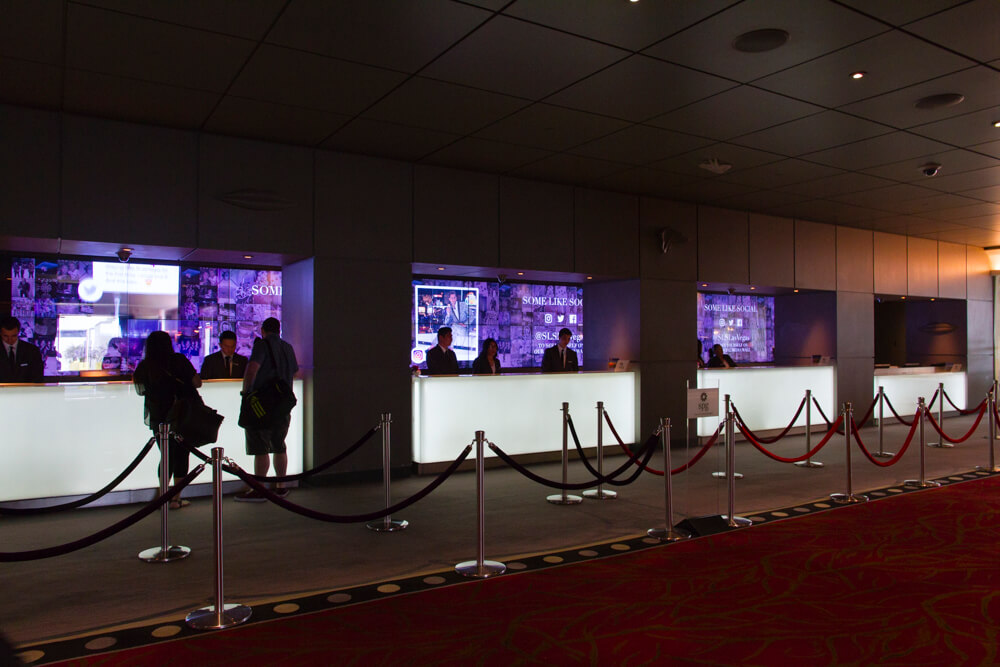 Once inside, we turned left and made our way to the dimly lit lobby.  Here you’ll find three lines, one for general guests, one for SPG elites, and one for airline crews.  I stood in the SPG elite line and was promptly assisted.  However, the associate checking me in, while efficient, seemed rather unhappy.  She wasn’t rude, but seemed like she didn’t like her job either.  My status was instantly recognized, though, and was offered bonus points.  We were also informed that our rate included a daily $20 dining credit. 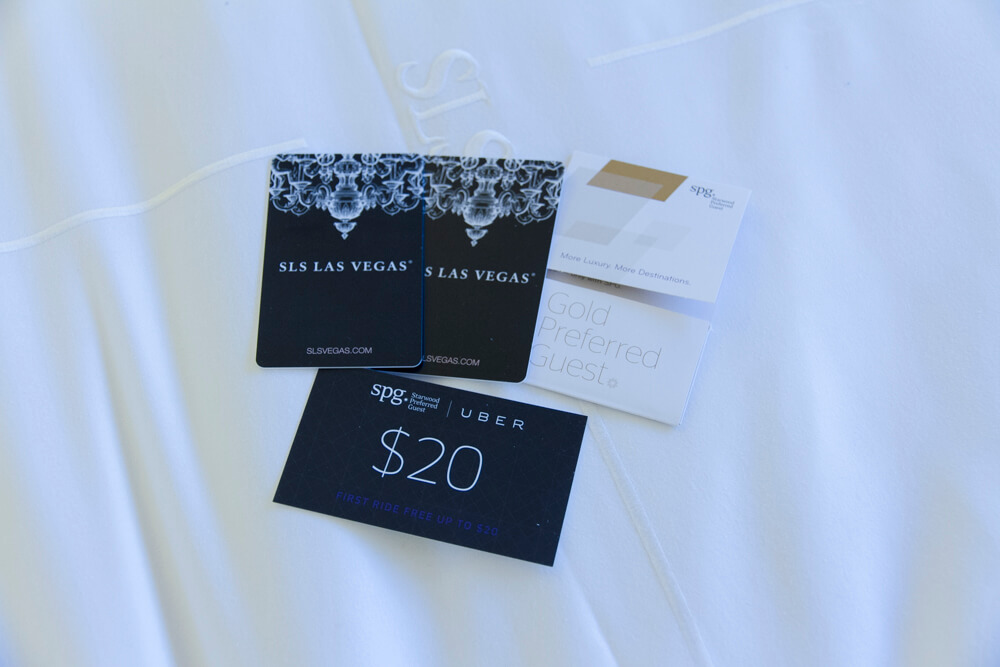 After receiving our room assignment, we were directed to the elevators to the left of us (facing the front desk) to our room in the World Tower.

I didn’t want one of the crazy ass rooms in the Story Tower, so I intentionally booked us into the cheaper World Tower.  The rooms in this tower are more conservatively decorated, if you can even call anything conservative at this property.  All rooms in this tower have black and pink walls with mirrors and a white + stainless bathroom.  In the Story Tower, on the other hand, the bathroom is neon yellow, the bed is in the center of the room, and there’s a mirror on the ceiling.  The rooms in that tower looked rather cramped because of the space use and I just didn’t like the neon yellow bathroom…

Anyway, to access our room, we had to present our key to the security guard posted near the elevator bank.  And then from there, we simply took the elevator up to the 6th floor. 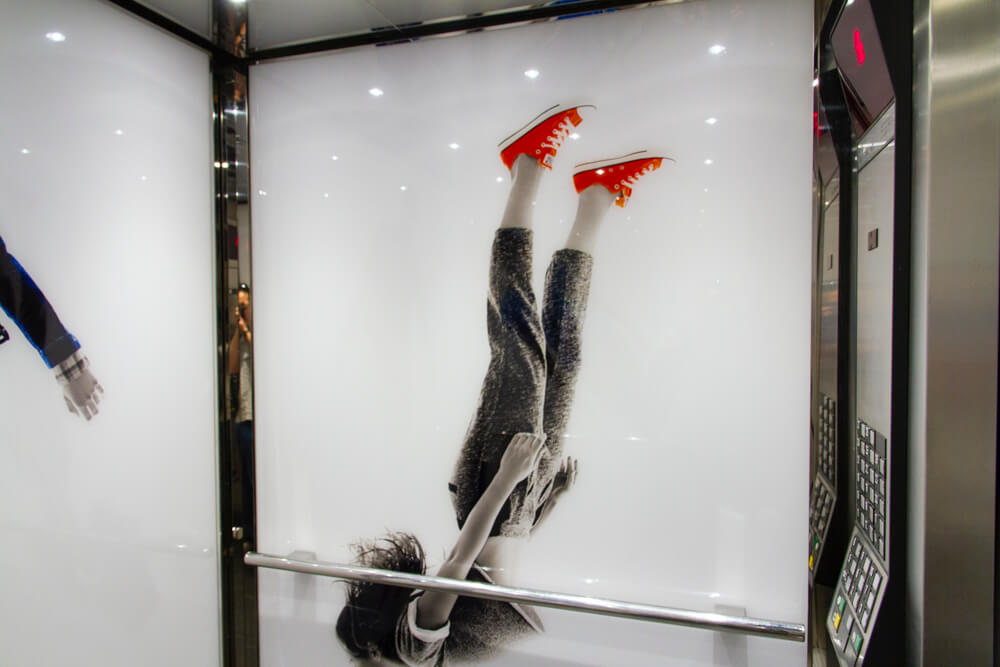 Our room actually ended up being at the far end of the corridor, which thankfully wasn’t all that long.  Though it was fairly dark.  In fact, the below picture makes the corridor look a bit brighter than it actually felt in person. 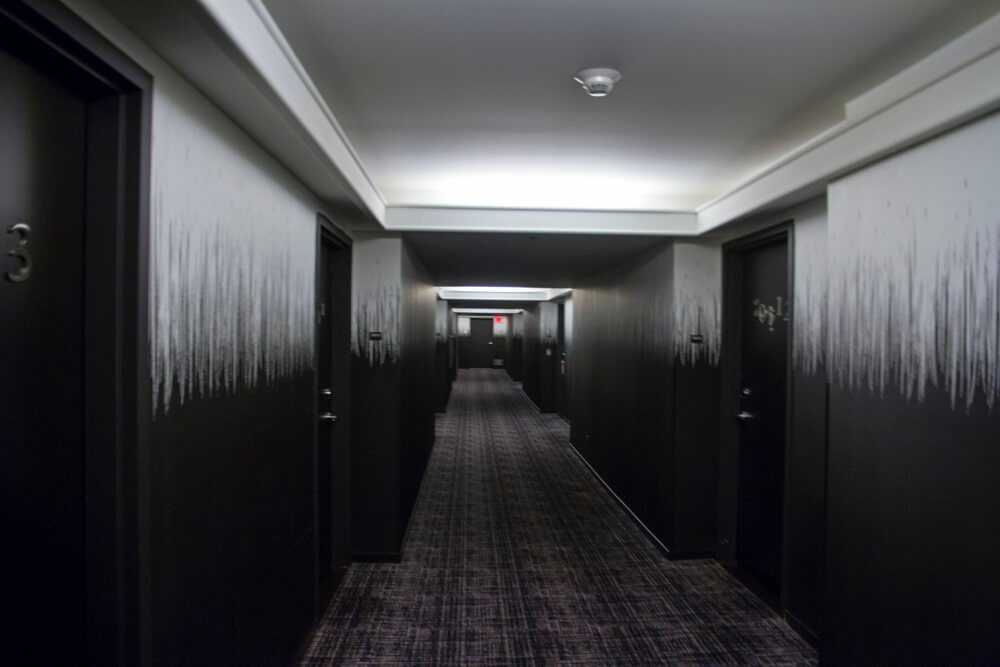 At 360 sq/t, the World Tower rooms are on the smaller side, but not terribly so.  They are, ironically, larger than the more expensive Story Tower rooms, which are 320 sq/ft.  But you know what?  Our room felt small from the moment we walked in.  To the right of the doorway as you enter the room is the bathroom. 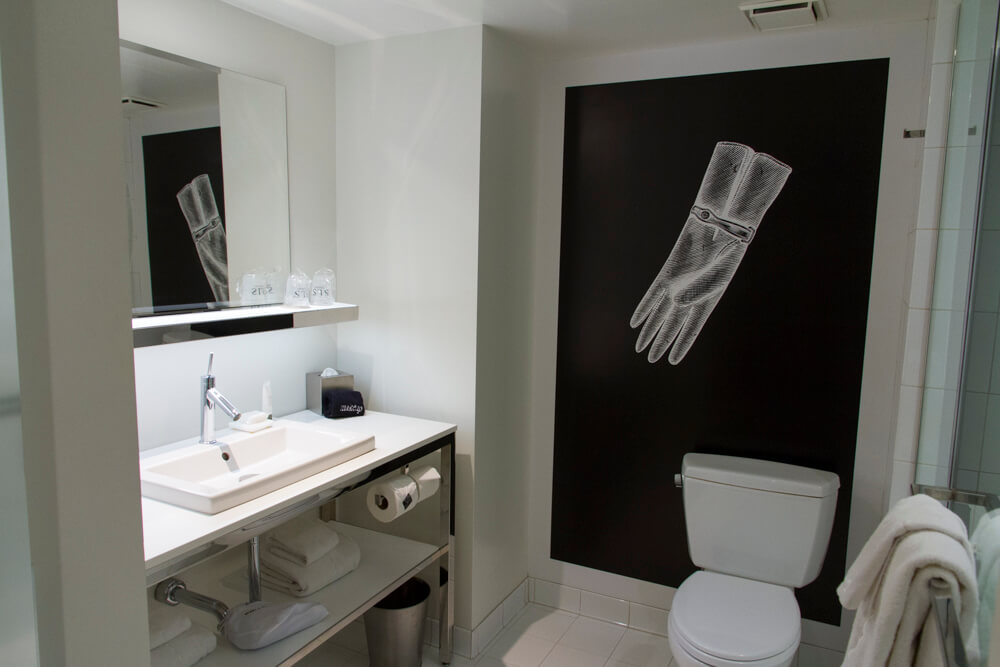 The bathroom is decently sized, and contains a single vanity, the toilet, and a shower.  It’s bigger and nicer than the one we had at the Hyatt Place Waikiki, but that’s not saying much.  Oh, and take a look at how far the toilet paper is from the toilet.  Didn’t really bother me, but if you’ve got short arms…. Good luck. 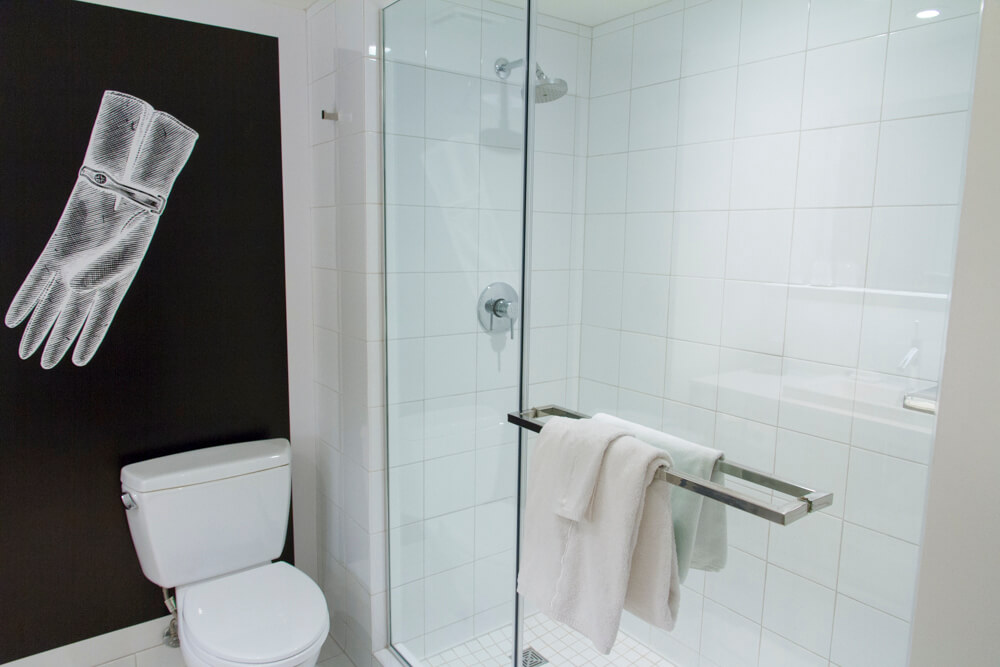 Toiletries at the SLS’s own private label brand, which had a slightly sweet, vanilla-y scent to it. 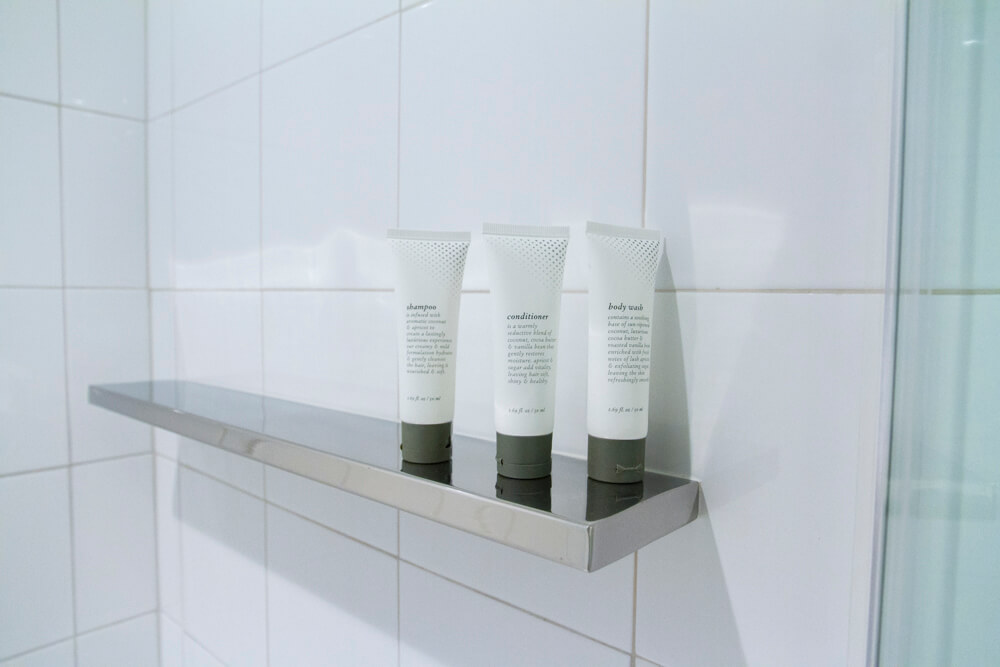 Personally, I don’t care for liquid soap.  It just doesn’t work well with a wash cloth… And to get a proper lather, I had to use about half a tube of the body wash.  I’d much prefer bar soap, but there isn’t anywhere to put it in the shower.  And don’t forget to move the safety seal before you begin your shower!  Learned that the hard way.  Speaking of showers, like water pressure?  Good luck.

Across from the bathroom is the closet, mini bar, safe, iron, ironing board, and some shelving. 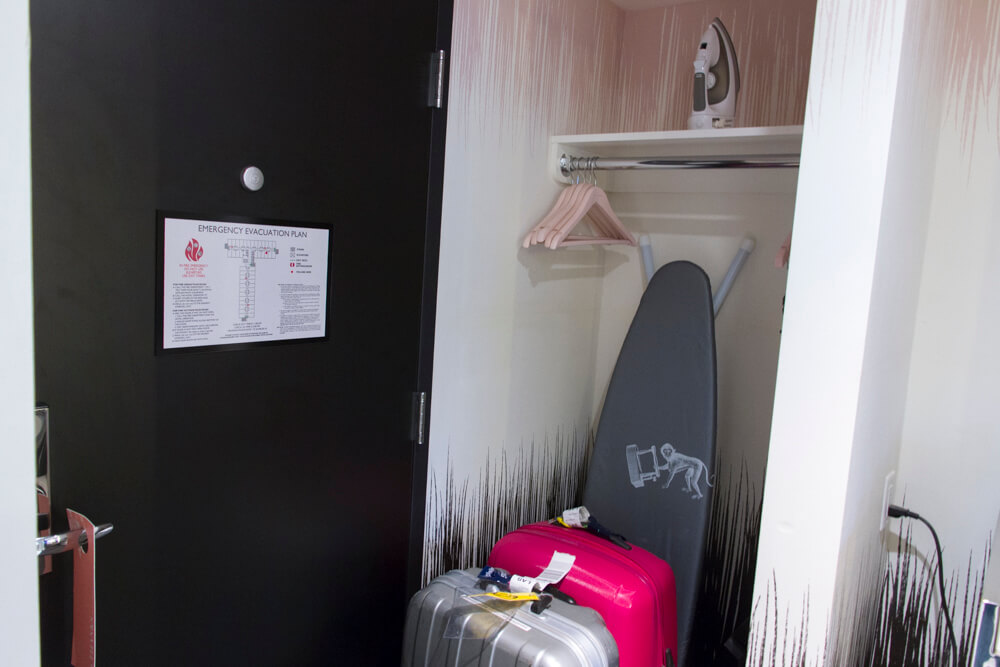 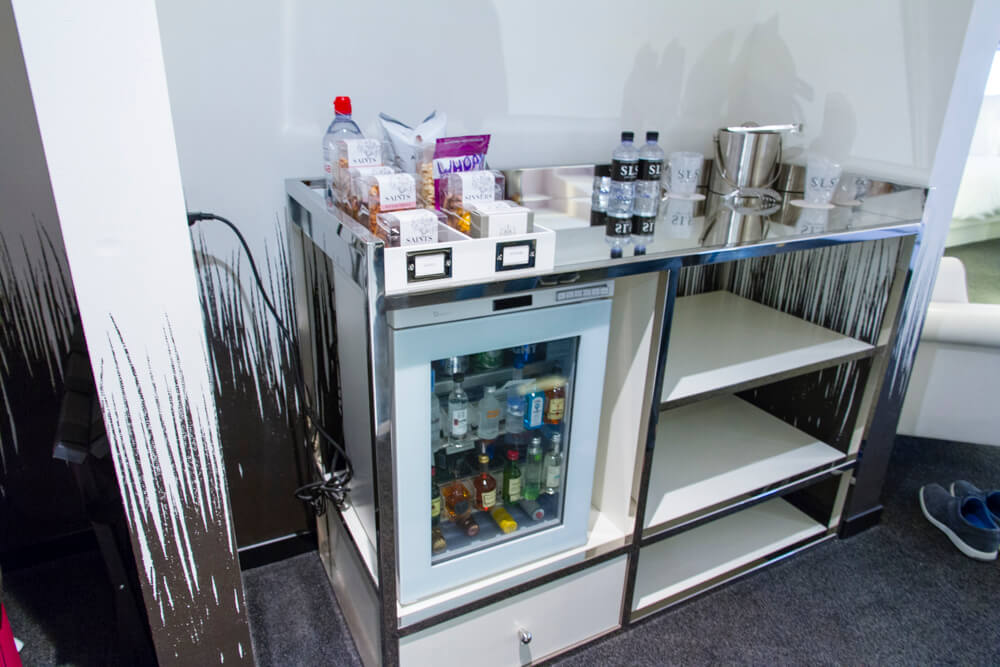 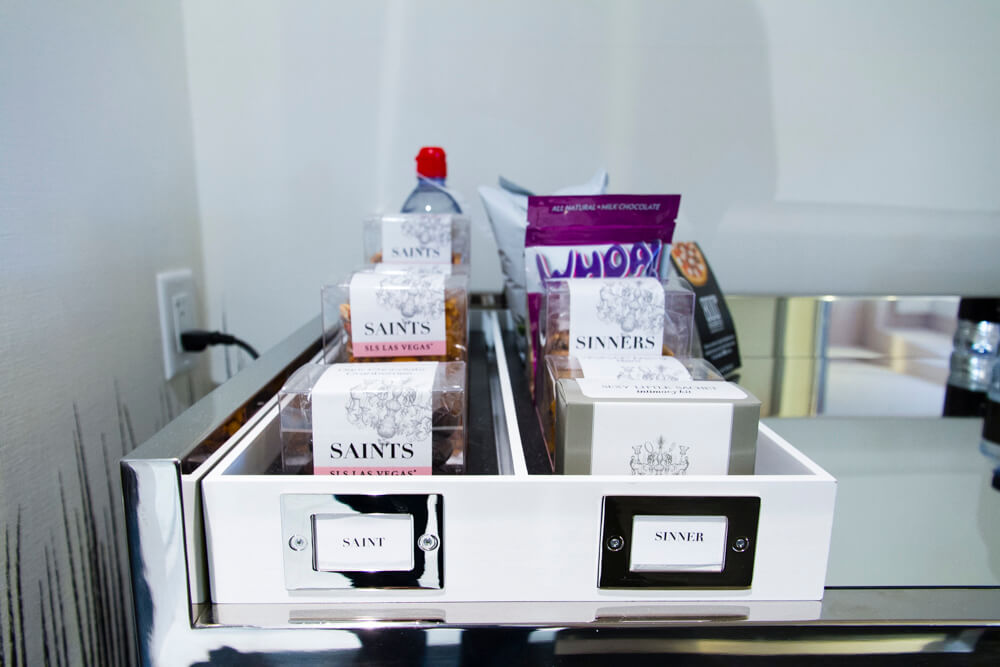 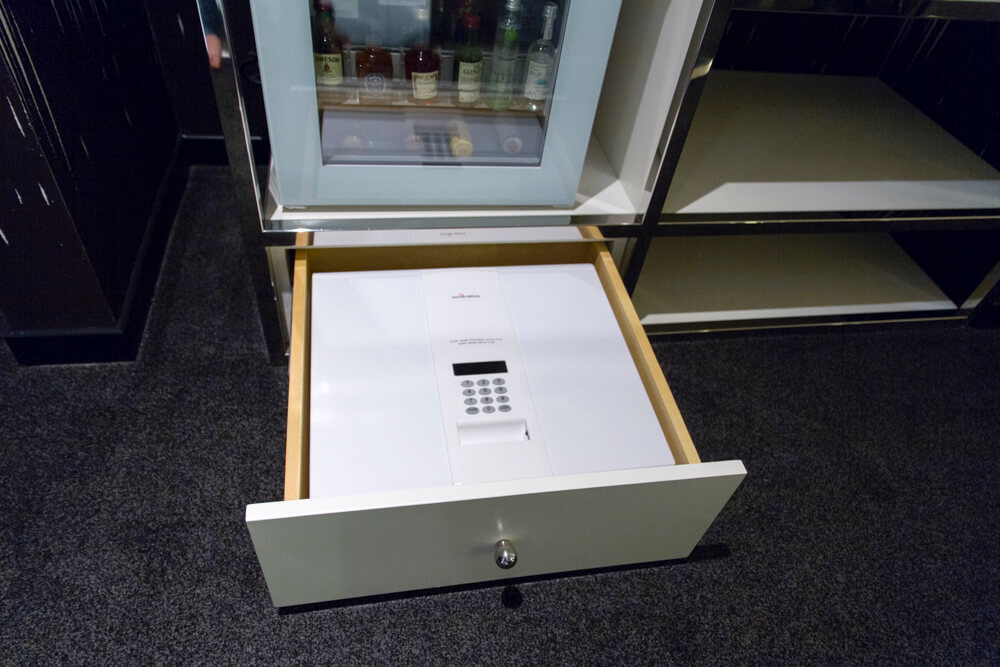 The safe was large enough to hold my 15″ MacBook Pro, which is a plus.  What I didn’t like, though, was the fact that you have to pay a $25/night fee to store your own stuff in the mini bar.  Those shelves you see there are also the only storage in the room; there’s no dresser to be found.  Sure looks messy when you have your clothes piled all on it.

Looking further into the room, you’ll find a bed and sofa.  The bed itself had the sole window behind it and was surrounded by two leather headboards of sorts, two night stands, two lamps, and two giant lighted mirrors on either side. 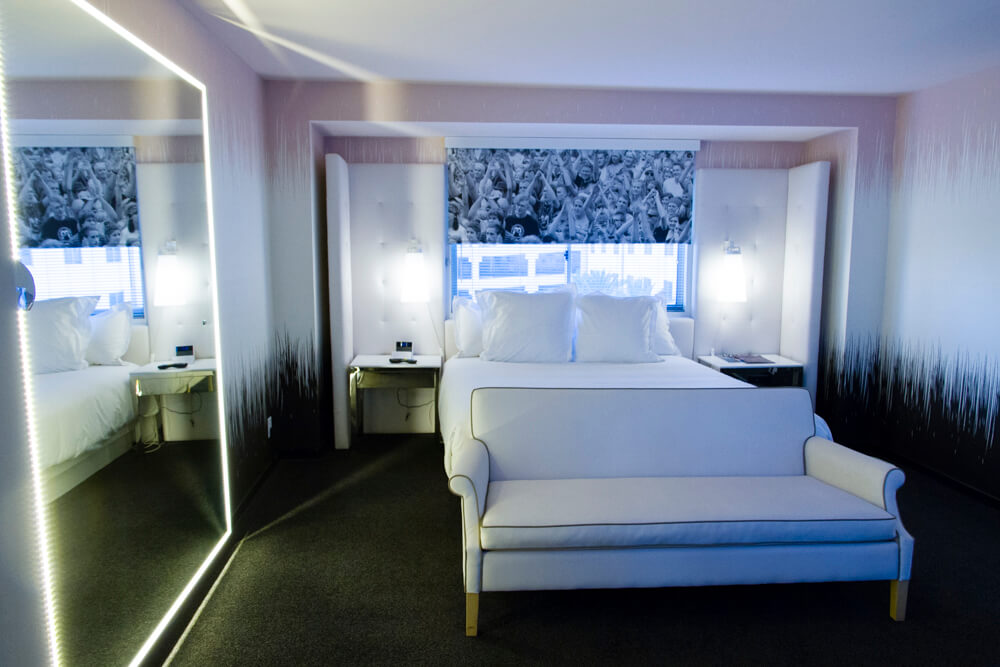 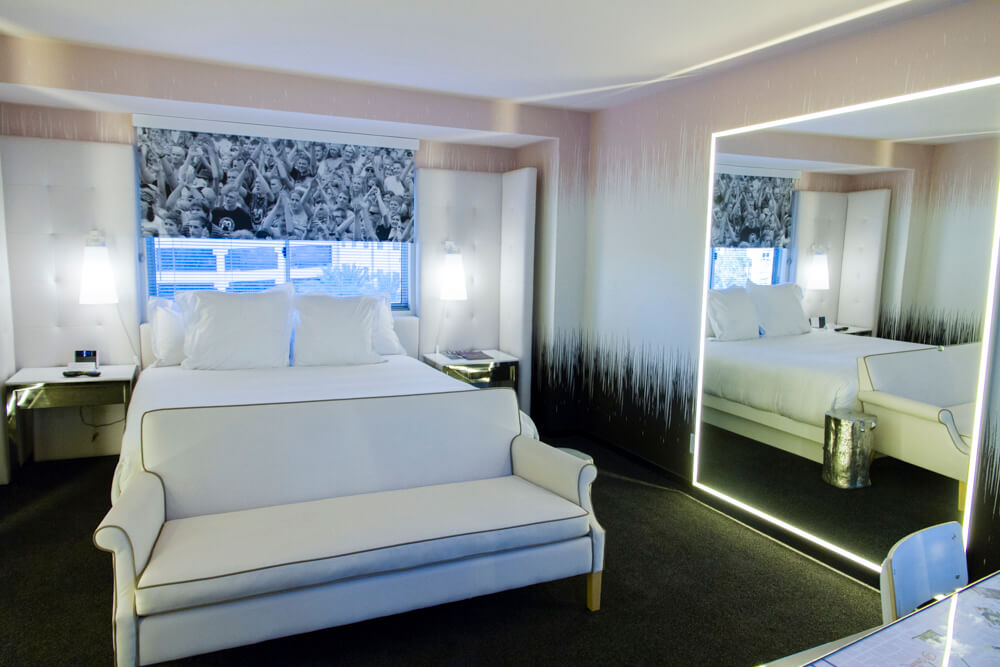 Opposite the bed and sofa was a desk with a chair, a table lamp, the TV, another chair, and a lamp. 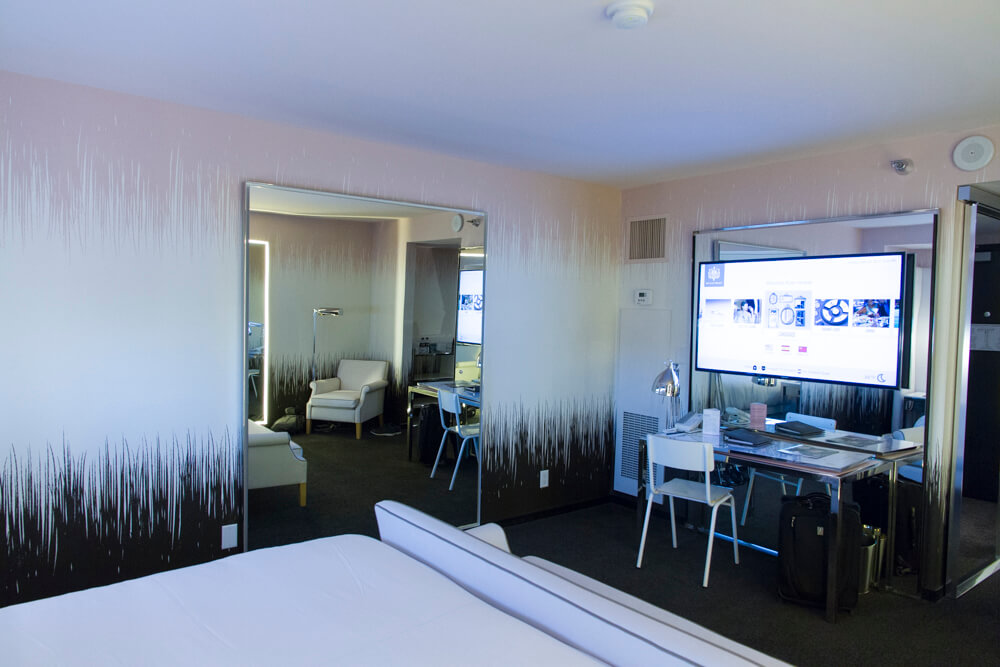 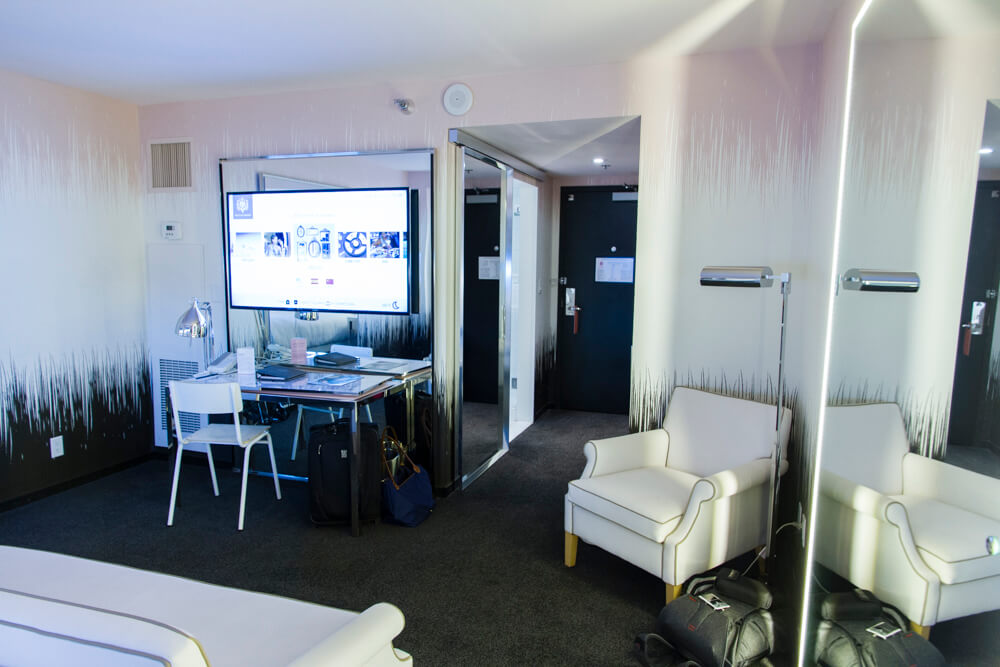 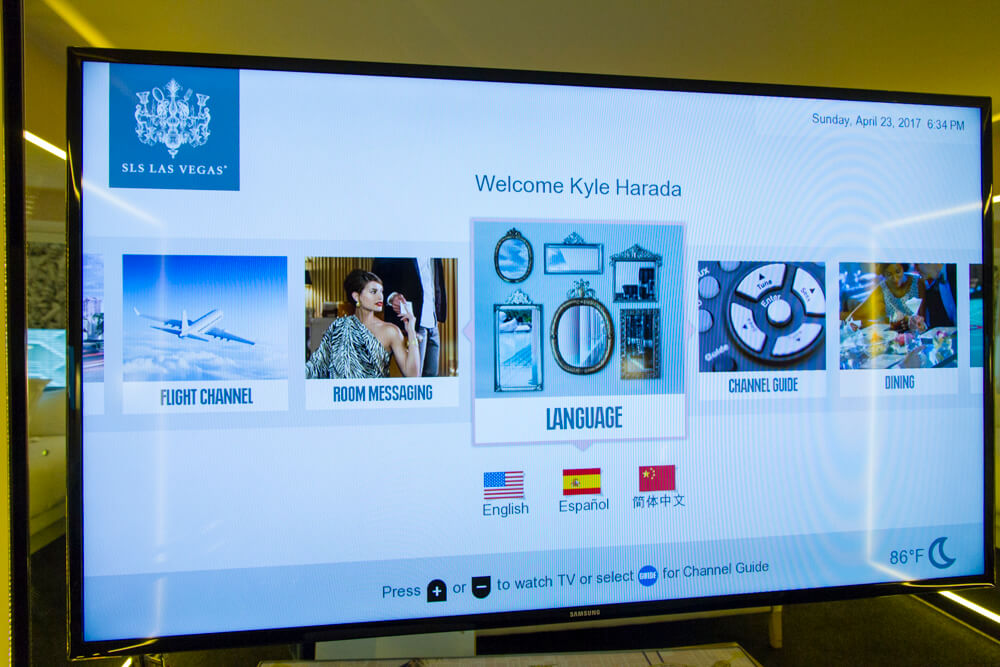 The mirror and the 4 lamps are actually the only sources of light in the main portion of the room, which meant the room was fairly dim at night.  This wasn’t really an issue for us, though, and this lack of lighting seems pretty, well, normal at hotels anyhow.  More importantly, though, was the fact that the a/c worked well.  It was a tad on the noisy side, primarily from the sound of the air rushing out, but wasn’t all that bothersome either. 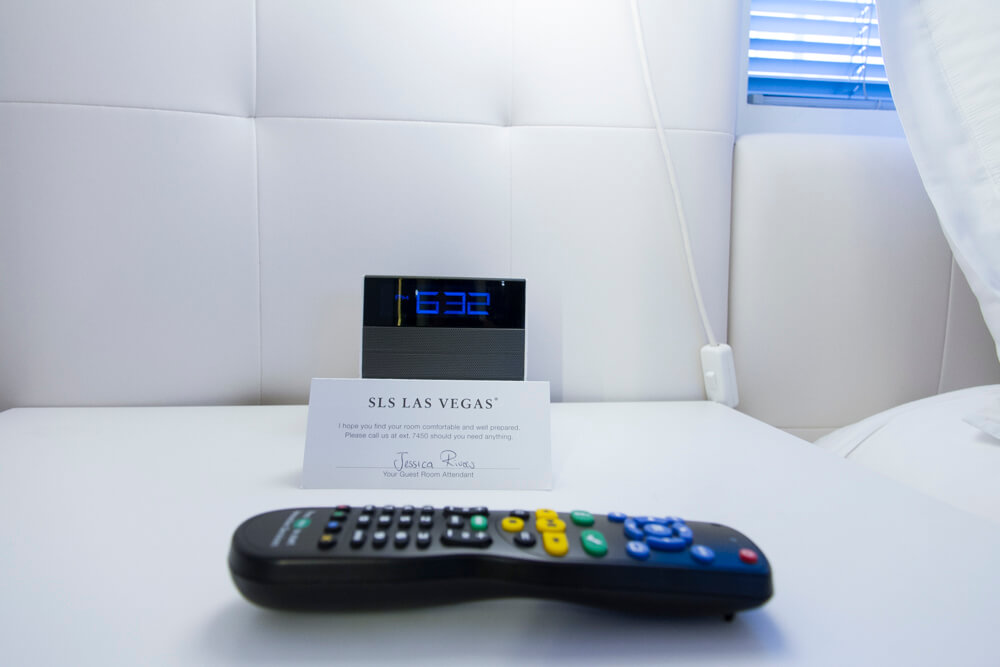 The only phone in the room was located on the desk across from the bed, while one of the nightstands had a radio/alarm clock along with the TV remote.

The rooms at the SLS Las Vegas don’t have expansive floor-to-ceiling windows as is the case at so many other hotels and resorts along the strip.  Instead, you get a single, small window that’s often right above your bed.  This would suck if you had a great view, but you know what our view was?  It was of the parking garage.  In fact, we could literally see our car in the garage too. 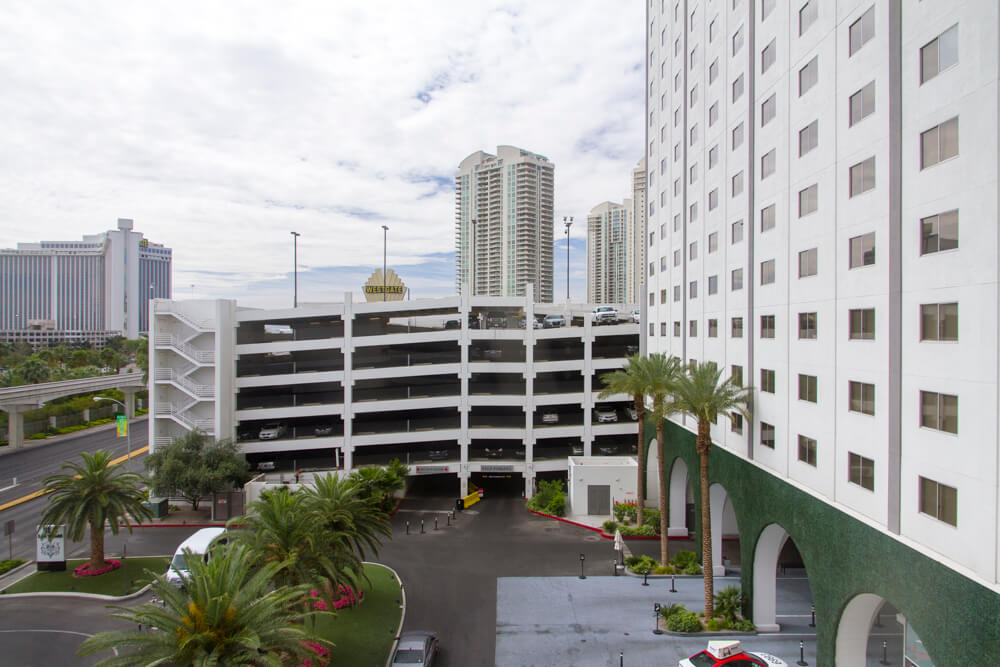 Oh well… It’s not like we were planning on being in our room much anyway.  But if views are important to you, this may not be the property for you.

We didn’t spend much time on property, as we had other adventures to go on.  But, we did enjoy dining on property.  Of course, I’ll save my comments on those experiences for their own posts, but if its one thing the SLS does well, it’s food.  The SLS Las Vegas does also have a fitness center spa, and pool, though we couldn’t find the fitness center (to be fair, didn’t try hard) and the pool looked *meh*.  The casino is on the smaller side, and during our visit, was quite empty most of the time.  That meant there wasn’t much in the way of smoke in there and it was pretty easy to find machines and tables to jump on.  Despite this, we didn’t gamble much here, and I’m glad I didn’t because the new Club 52 program is far less rewarding than Mlife and Identity.

I realize that this whole posts sounds like I’m just ragging on the SLS, and I’ll admit, I kind of am.  Service at the front desk and the sundries store was, well, mediocre to bad.  Staff in the porte cochere were pretty indifferent too.  And the rooms… They’re exactly what you’d expect from Philippe Starck, and (at least with the World Tower) are fine with me, but they are very small and very form over function.  Having no dressers or drawers at all really means you either have to live in clutter or live out of your luggage.  Both aren’t ideal.

That being said, some things that annoyed me aren’t unique to the SLS as I had later found out.  Safety seals on the toiletries seem to be a thing in Vegas, one I wasn’t expecting having never been.  And all showers seem to employ low-flow shower heads for conservation purposes, which is fine with me.  The whole charging for personal use of the mini bar?  Yeah, that’s not unique to the SLS either, and in-fact, the rate here was lower than at our next hotel.  So in assessing the SLS Las Vegas, its important to omit these three points.

But even while omitting those three annoyances, our room still wasn’t functional, the property is still out of the way (which I knew was the case), and the service wasn’t good.  So it isn’t a property I could see myself wanting to return to, nor one I could recommend.  To me, the only benefits of this stay were the price, ability to earn SPG qualification nights and Starpoints, and free parking.