Things are going to be very different without Korean SkyPass as an Ultimate Rewards transfer partner.  But there are still great values available, so let’s look at the best way to earn Hawaii award travel with credit cards.

I lament the fact that I never got to make an award redemption with Korean Air via Ultimate Rewards.  They have a great product between Hawaii and North Asia, plus amazing values for travel to the Continental U.S.  But good award values are still available for travel between the Continental U.S. and Hawaii via credit card points.  Some of these options, though, are going to require more complicated reservation processes.

The obvious choice now is still the same as it was last time, HawaiianMiles.  Hawaiian’s own program is the simplest to use for obvious reasons but doesn’t provide good values.  As a refresher, here’s what their redemption chart looks like.

Remember, Membership Rewards transfer 1:1 to HawaiianMiles, while Hawaiian has it’s own co-branded credit card too.

While Delta is probably the best U.S. carrier, it’s loyalty program is awful.  The lowest priced award flight I can find is 40,000 miles between Hawaii and the Pacific Northwest in economy.  Figuring out how many miles you’d need with Delta, though, isn’t so straightforward, as they don’t have an award chart.

One of the best values for traveling between Hawaii and the Continental U.S. going forward will be on Alaska Airlines via Singapore KrisFlyer.  Just take a look at their award chart.

As you can see, you can travel between Hawaii (Zone 5) and the Continental U.S. for as little as 23,000 miles in economy.  And, better yet, Zone 2 includes:

Zone 1, on the other hand, includes California, Oregon, and Washington.  While Zone 3 includes Texas, Illinois, and more.  Unfortunately, Singapore’s award chart doesn’t allow you to travel to the East Coast from Hawaii.

When searching for award space, you can’t search for Alaska Air award space on Singapore Air’s website.  Instead, you’ll need to call into their support center to book your award flight.  Plus, you may have to complete an archaic request form and submit it via e-mail or fax.  And what’s worse is that points don’t transfer instantly to KrisFlyer.  Instead, it takes an average of one to two days for points to transfer.

You could also use KrisFlyer miles with United for travel between Hawaii and North America.  In this case, it’ll cost you 35,000 miles roundtrip in economy, 60,000 in business, and 85,000 miles in first.

While I wouldn’t want to redeem points for traveling on British Airways, redeeming Avios for flights to and from Hawaii can be a great value too.  You see, British Airways Executive Club uses a distance based award chart.  This means that a roundtrip ticket between Hawaii and the West Coast (up to 3,000 miles), will cost you 25,000 Avios roundtrip in economy.  But redeeming Avios to get to the East Coast isn’t worth it, as that’ll cost your around 50,000 Avios roundtrip in economy.

British Airways Avios transfer from Ultimate Rewards at a ratio of 1:1.

Another Hawaii award travel option is to redeem Flying Blue miles for travel on Delta.  An award ticket from Hawaii to Seattle or Atlanta will cost 35,000 miles roundtrip in economy or 86,000 miles in first.  And while not as good a value as SkyPass, 35,000 miles is still a decent deal.  After all, you can only get a 35,000-mile award ticket on Hawaiian if you’re a cardholder.  But a first class award flight is still cheaper using HawaiianMiles on Hawaiian, starting at 80,000 miles for a roundtrip ticket.

A roundtrip economy award ticket from the West Coast to Hawaii will cost 44,000 points and 90,000 points in first.  From the East Coast, a roundtrip economy award will cost 60,000 miles, and 140,000 miles in first.  Needless to say, East Coast awards are garbage and are not competitive with Hawaiian’s on award chart.  But those same rates also apply to Hawaiian’s international destinations.  And that, my friends, is a good deal.  Hawaiian charges 80,000 miles for an economy award and 130,000 for a business class award to Australia, New Zealand, Japan, and Korea from Hawaii.

For the most part, Flying Club award redemptions cost the same as HawaiianMiles award flights.  That is, with the exception of East Coast award flights, which cost double.

While Aeroplan is a Membership Rewards transfer partner (1:1), their Hawaii award flights are absurdly expensive.  The lowest price economy class ticket starts at 60,000 miles between Hawaii and Mexico.  No thanks.

Alaska Airlines partner Emirates Skywards is also a Membership Rewards partner (1:1).  Points transfer over at a rate of 1:1, with an economy award flight between Hawaii and the Continental U.S. pricing at 40,000 miles; 75,000 miles in first.  So, while an Emirates economy award on Alaska is priced the same as Hawaiian, first class awards with Emirates on Alaska are cheaper by a little bit.

Another option is to transfer Membership Rewards and ThankYou Rewards points to Etihad Guest (1:1) and redeem miles via partner airlines.  For example, on American flight between Hawaii and the Continental U.S. will cost 35,000 miles off-peak or 45,000 miles peak in economy and 75,000 to 95,000 miles in first.

Traveling internationally?   You’ve got a few options with Etihad.  For example, an award flight between Hawaii and Japan costs 48,000 in economy on ANA, 86,000 miles in business, and 172,000 miles in first.  Redeeming via Korean Air and Air New Zealand are ridiculously expensive, so I won’t even go there.

As you’ll remember from my post on using Ultimate Rewards points with Korean SkyPass, you can amass a large number of points using the Chase Trio (Sapphire Reserve + Freedoms).  Of course, the Amex Platinum + EveryDay Preferred combo earns more points, but with a much larger combined annual fee.  And, if annual fees really are of no concern to you, then you can earn over 98,000 points with the Amex Gold Premier Rewards card.  For spending assumptions, see my previous post.

In case you’re wondering, I did leave out Citi ThankYou cards.  Things are kind of weird over at Citi right now, so I’ll revisit once they figure things out. 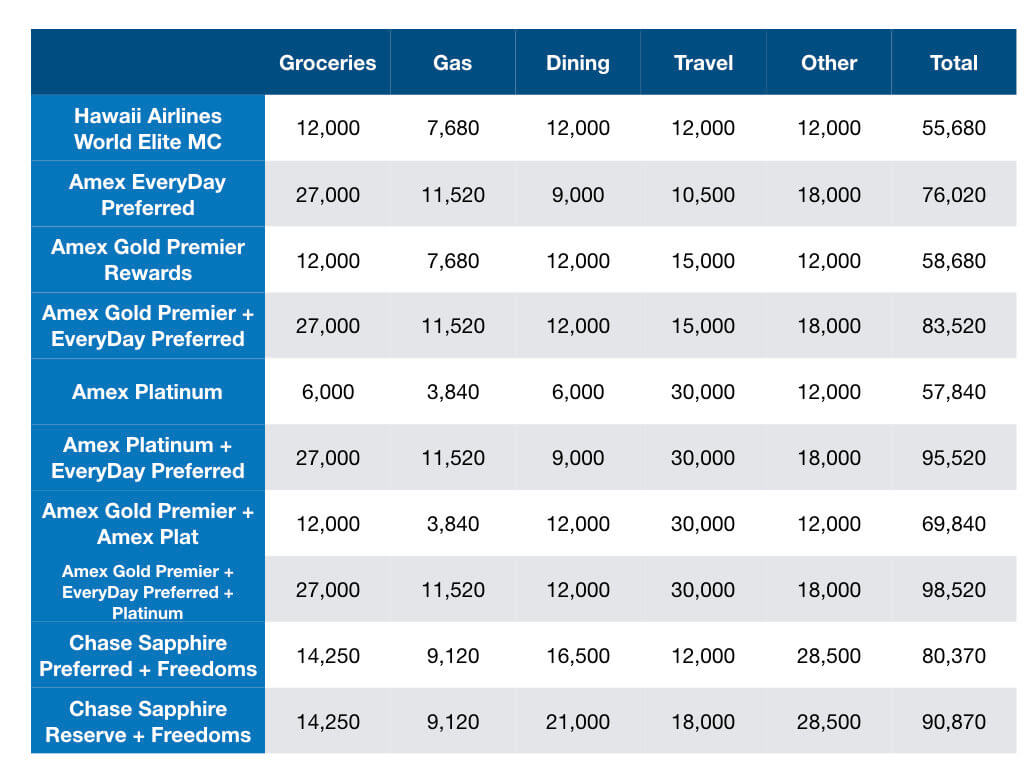 Want to go to the East Coast to or from Hawaii?  Flying Blue is your best option, at least in economy, which will cost you 35,000 miles on Delta.  You could also transfer points to Etihad for off-peak travel on American for 35,000 miles too.  For first class awards, you can transfer points to Virgin Atlantic (Chase and Amex) or Hawaiian Air (Amex) for flights on Hawaiian starting at 80,000 points.  Cheaper awards are available on Alaska via Emirates (Amex), but it’s only 5,000 miles less.  And it’s worth noting that Hawaiian does have lie-flat sleeper seats in first, while Alaska does not.

With the loss of Korean Air SkyPass as a transfer partner, I’m sorry to say that the Chase Trio is no longer the best way to earn award flights for travel between Hawaii and the Continental U.S.  The Amex Duo edges the Trio out a little, though at a much higher annual fee cost.  So the Chase Trio will still likely work best for most people.

And while KrisFlyer gives us cheaper award flights between Hawaii and the West Coast and the Central U.S. than Korean SkyPass, all other options are far more expensive.  So, hopefully, Korean SkyPass becomes a transfer partner for another credit card program.  I’m hoping for Amex, as JV partner Delta is already a transfer partner with American Express.

Of course, we still don’t know what Southwest award flights to Hawaii will look like.  We’ll just have to wait and see!  Oh, and, rumor has it that Amex is enhancing the benefits of its Premier Rewards Gold card.  So if and when they do, I’ll revisit the chart and up date it with the proper figures.