Recently, the Outrigger Hospitality Group unveiled its $80 million Outrigger Reef Waikiki Beach Resort renovation project. The project, which was stuck in planning stages for years, touches nearly every aspect of the property and even adds new rooms.

The Outrigger Reef Waikiki Beach Resort is one of the few Waikiki hotels actually on the beach. It’s also one of the Outrigger Hospitality Group’s signature properties. Having last received work in 2009, the property is showing its age. In fact, for the past five years, the property has been in the “planning” phase of a massive renovation project. However, back in 2016, the Outrigger Hospitality Group experienced a change in ownership. The new owners, Denver-based KSL Capital Partners LLC, didn’t agree with the then-proposed $100 million plan. Instead, they kicked-off an $80 million project in January 2020.

Looking at pictures (I’ve never stayed here), the old rooms look old and stuff. In fact, it looks older than 12 years old, in my opinion. So, the new room layout and decor are a massive breath of fresh air to me. The palette of blues, whites, and woods especially help to reinforce the property’s ocean-front location. I think they did a great job here.

In addition to the enhanced look and feel of guestrooms, Outrigger is also enhancing in-room technology. Going forward, all rooms will feature Sonifi Chromecast, which allows guests to watch content on their iOS or Android devices on their in-room TV. 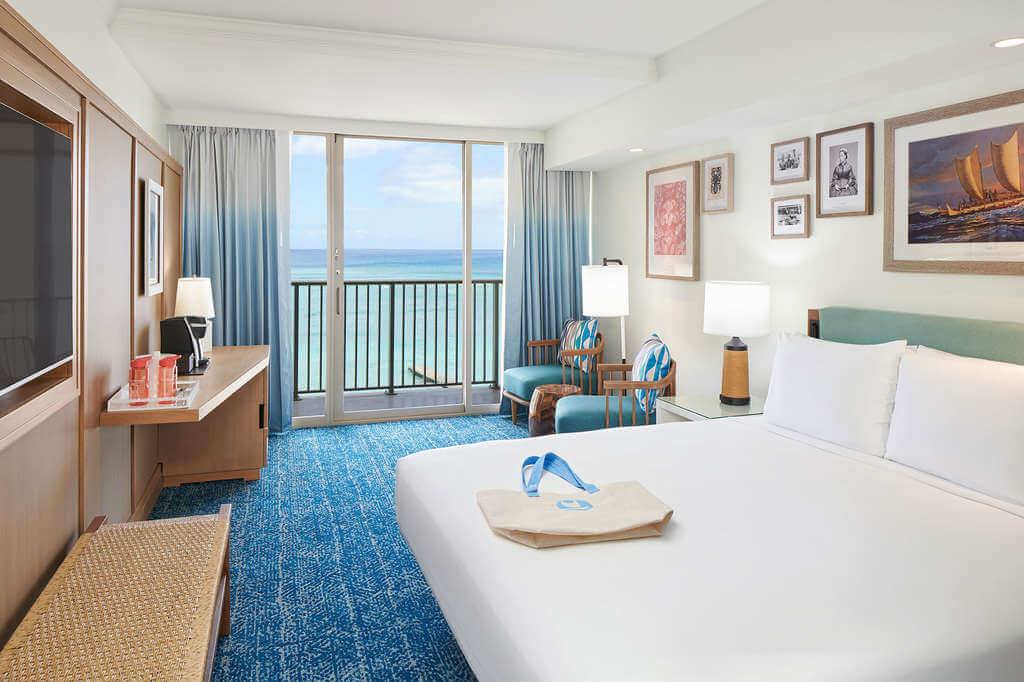 Beyond the guestrooms, guests of the Outrigger Reef can expect massive changes to the property’s public spaces too. Those changes include:

When all is said and done, the Outrigger Reef’s room count is expanding from 635 rooms to 658. The original 635 rooms are divided between the 18-story Pacific Tower (436 rooms) and the 10-story Ocean Tower (199 rooms). The 23 new rooms are going into the four-story Diamond Head Tower, which currently houses offices. Once complete, Outrigger says the about half of the rooms at the Reef will feature full or partial ocean views.

As mentioned earlier, work began back in January 2020. However, when the property closed due to Hawaii’s emergency declaration in March 2020, work accelerated. And, why not? With the property completely closed, more can be done at once. As a result, the vast majority of the work is expected to be finished when the property reopens in April 2021. Work at the Diamond Head Tower, however, will continue through to August 2021.

Honestly, I think the changes being made to the Outrigger Reef Waikiki Beach look good. In my opinion, they’ll make the hotel a more compelling option, especially since it’s right on the water. That said, it’s too bad the area is packed so tight. A large majority of the rooms here have views of the surrounding hotels. Either way, though, it’s nice to see more and more Waikiki properties getting the attention they need. And, despite the pandemic, I hope it’s a trend that will continue.