Did you watch Marriott’s announcement regarding the integrated rewards program yesterday?  I tried, but after watching 15 minutes of filler, I gave up.  Seriously?  What were you thinking, Marriott?  Thankfully, Ben over at One Mile at a Time already had all the details posted.  And, well, the new program is a bit of a mixed bag.  So here’s my Marriott loyalist take on the changes.

As it turns out, the rumors about the new Elite Tiers that broke last week are accurate.  There will be five Elite Tiers going forward: Silver (lol), Gold (lol), Platinum, Platinum Premier, and Ambassador.  And, as rumored, the qualifications will be as such:

So, again, it looks like the new program will keep all of the tiers from both programs.  It is worth noting, though, that Silver status is automatic if you have a co-brand credit card, but more on that later.  And, as you can see, Elite qualifications going forward will be easier, which is a good thing.

Now here’s where things become a mixture of good and bad.  In the new program, Elite members can expect the following benefits:

So, as we can see, the new program mashes together the benefits of both SPG and Marriott Rewards.  Which means, instead of having just one crap Elite Tier, now we have two.  Silver is a joke, while Gold provides marginal benefits at best.  And, like SPG, breakfast is now a welcome gift amenity, which won’t be available at EDITION, Gaylord Palms, Ritz-Carlton, Marriott Executive Apartments, and Marriott Vacation Club properties.  But, hey, now you can get free breakfasts at Courtyard!  Though, the Bistro isn’t someplace I’d choose to eat anyway. 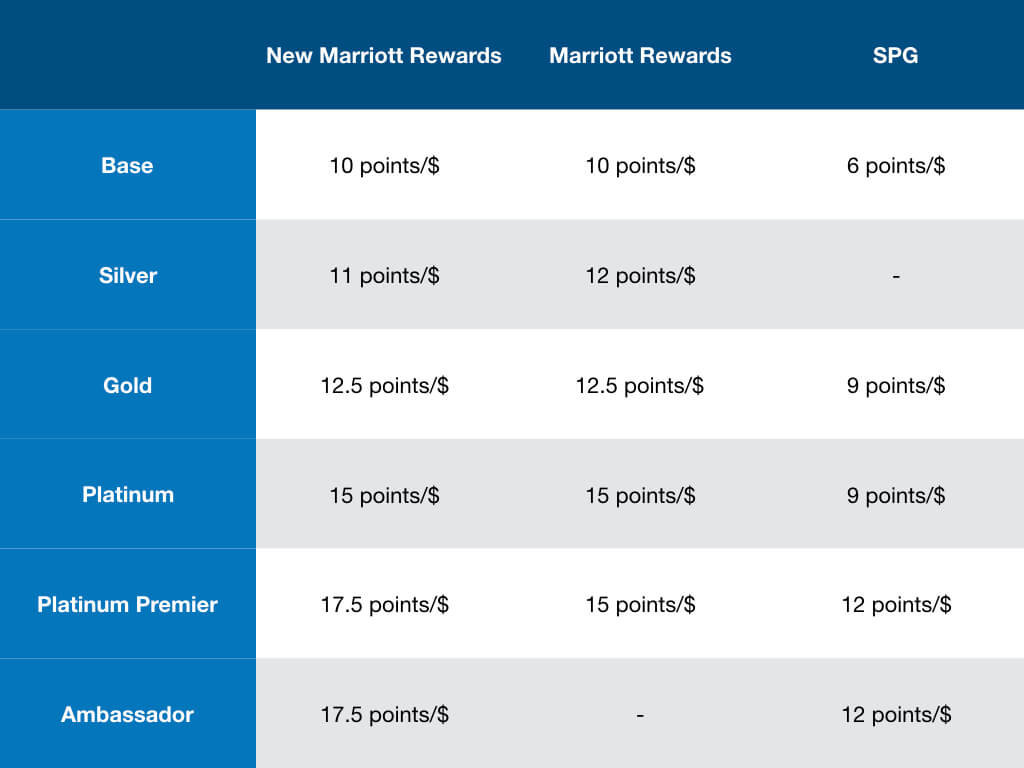 For all Marriott Rewards members, except for Silver Elites and Platinum Premiers, the new earning rates are maintaining the status quo.  Platinum Premiers, of course, are getting a boost, while Silver Elites will earn slightly fewer points.  For Starwood members, though, the new program represents a significant increase in earning rates.  But don’t get too excited yet.

While earning more points is a good thing, it’s a double-edged sword.  And this is abundantly clear with the new award chart. 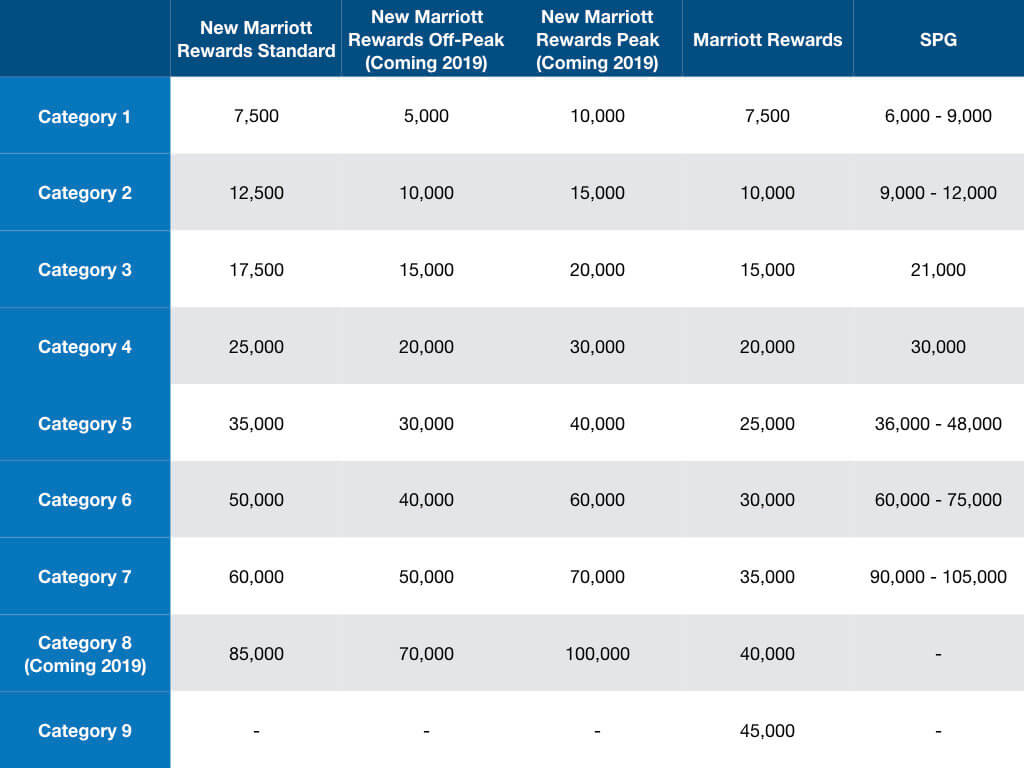 Yikes!!  This new chart represents a potentially MASSIVE devaluation for Marriott Rewards members, but better value for SPG members. What especially worries me, though, is if Marriott decides (and I wouldn’t put it past them) to just shift all category 8 and 9 properties in the current program into Category 8 of the new program.  Such a scenario would be devastating for hotel night award values.  And I really, really hope this isn’t what happens.

This aspect of the program merger is, honestly, the one that concerned me the most.  And, from a Marriott loyalist perspective, my fears have been realized.  Going forward, this is how members will qualify for Lifetime Elite status:

The new program is adopting a modified version of Starwood’s Lifetime Elite qualifications, and, under the new program, I already qualify for Lifetime Silver Elite.  And, should all go as planned, I’ll hit Lifetime Gold Elite sometime next year as well.  But, under the new program, Gold Elite is a joke.  You no longer receive lounge access, breakfast, etc. like you did under the old Marriott Rewards.  That means, to maintain the same level of benefit I receive today, I’ll need to obtain Lifetime Platinum Elite.  And that means a long road ahead for me, especially since I can no longer qualify based on a combination of credit card spend and stays as I have been.

Wow.  We got shafted on this one.  And even the Chase card has seen its annual fee increase $10, while you no longer earn bonus points on restaurant spend.  You do earn at least two points per dollar on all spend, but considering how much more points you need for award nights, this isn’t exactly much of an increase.  Unfortunately, cardholders will not be able to earn EQNs based on spend with the new cards, which means my current elite status strategy will no longer work.

How the New Credit Cards Compare

What a letdown!  The Amex Super Premium card doesn’t even compare to the Amex Hilton Honors Aspire card, in my opinion.  With that card, the $450 annual fee will get you:

So, the things the Hilton Aspire gets that’s better are elite status (top tier), bonus points on car rentals, no-limit anniversary reward (though it’s valid only on weekend nights), up to $350 in combined Hilton-spend statement credits, and $250 airline fee credits.  Thanks, Marriott.  I’m not sure that new Amex card will be worth getting; I might be better off getting the Hilton version instead.  Especially since I  can now earn a much higher status with Hilton than I can with Marriott.

Except for the Credit Cards, all of the above changes go into effect on August 1, 2018.  In fact, this is the date on which the new program will launch, and spg.com will disappear.  From this date, on, all reservations, etc. will be handled through marriott.com, and you will be able to earn and redeem points and enjoy unified elite benefits across all properties.

The name of the new program, however, has not been determined yet; that won’t come until next year.

The changes to the combined program were clearly made with Starwood Preferred Guest members in mind.  Many of the changes are positive for them, though they’re generally a devaluation for Marriott Rewards members.  And while I understand Marriott sought to appease SPG members, I think it’s foolish to do so at the cost of Marriott Rewards members.  But, I can’t say I’m surprised.  After all, Marriott has been devaluing the program and cutting benefits for some time now.  A devaluation was all but certain under the new program, and many of my worst fears came true.

However, without the ability to earn EQNs through credit card spend, my time as an upper-tier Marriott Elite is coming to an end.  I’ll likely maintain Platinum Elite status throughout 2019, but after that, I’ll probably fall back to Lifetime Gold in the new program.  So, going forward, I see little benefits to sticking with Marriott any longer.  And World of Hyatt definitely isn’t a program I’d consider at this point.  So, now it’s time for me to decide whether to stick it out with Marriott for now, jump ship to Hilton, or just become a “free agent.”  But if the existing Marriott Rewards Premier Visa from Chase continues to earn EQNs on spend, then I will stay for as long as I can keep that benefit.

I’m not holding my breath, though.  Marriott seems intent to push out infrequent travelers that obtain status through other means like myself.  Instead, the focus is shifting more towards people that actually stay often, and I can’t blame them for that.  It just sucks that these changes are happening, and happening now.  Especially since I’m closing in on the Legacy Marriott Rewards Gold Elite Status.