Over the past two years I’ve been to Maui 4 times, 3 of which had a hotel stay or two.  Though rare for me, one of the trips was for work, which meant I had no say in the hotel I stayed at.  My employer booked me into the Maui Seaside hotel, which is located in Kahului Maui.  Because most of the flights were identical to my flight to Kona, so I’ll spare you the details.

Anyway, the choice of Maui Seaside was purely based on price: $100/night.  Of course, with the price being half of what other places were charging, it’s easy to image what kind of quality you’d be getting.  Service wise, the staff was friendly during my stay, but I found certain elements odd… For example, upon check-in, I asked to have the front desk to hold my large suitcase since the room wasn’t ready yet, and rather than take it from me, they had me follow them behind the desk and to the storage closet.  I found this extremely odd from a service and security standpoint, as not only are you in an employee only area, for a good portion of the time the employee’s back is turned to you while you stand in the room with the bags.  Someone could easily steal bags from the room in this instance, though I doubt this actually happens.

As far as the actually property goes, all you have to do is look at the hotel’s website, and you’ll easily see what your experience will be like; basics, outdated rooms. 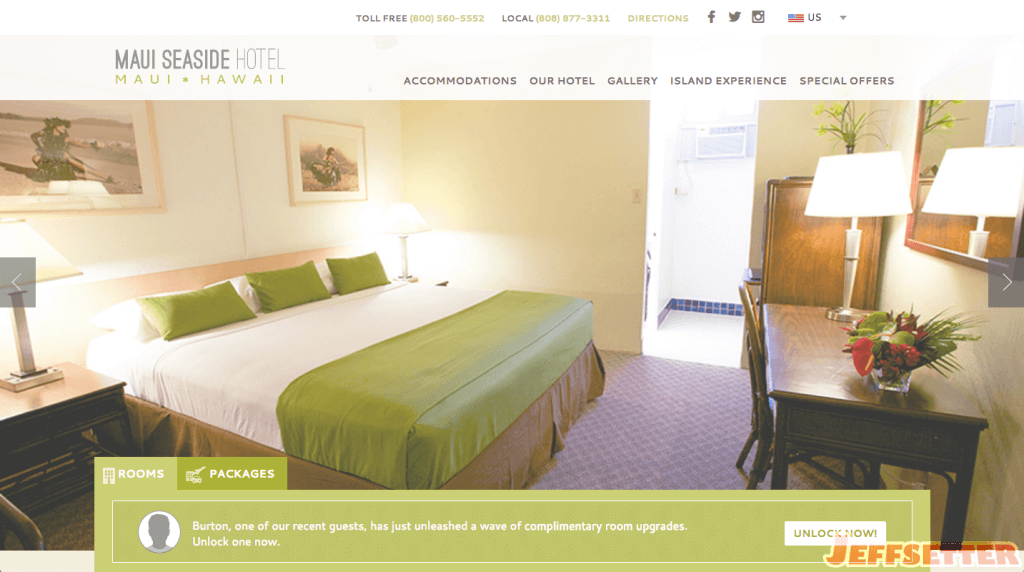 That’s actually an ongoing theme with this property, as the amenities of the property are very basic too.  The property does have a small pool in a central courtyard area, a couple of iMacs in the lobby, and a casual restaurant on-property.  The parking is entirely open air, and wraps around the various buildings of the property.  During my stay, the parking lot was completely filled, and I’m not sure there’s sufficient parking stalls for all of the rooms.  The stalls themselves are also very narrow, so a standard size car barely fits in them.  As far as the buildings go, the primary buildings are arranged in a U shape around the pool, while there’s one or two others that are taller than the main buildings.

My room was actually in one of the other buildings, which meant a little walk from the lobby.  The building does have an elevator, but the first floor is below ground level, and the second floor is still above ground level.  This means you have to go up or down a flight of stairs to access the elevator, not fun with a heavy suitcase. 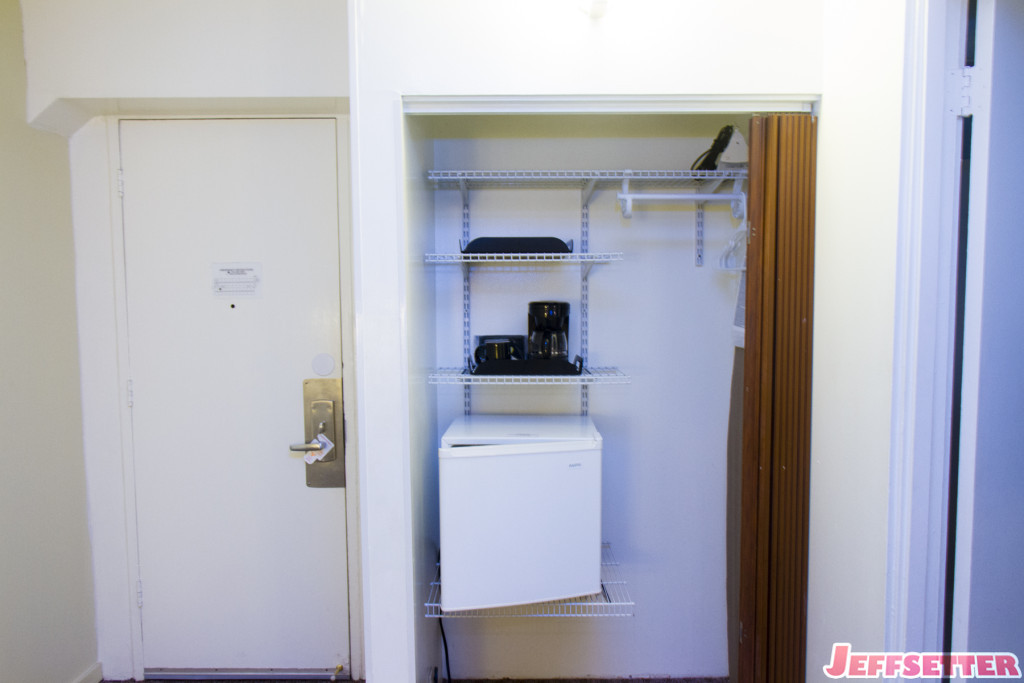 My room, on the third floor was a standard room.  When I walked into the room it was HOT & STUFFY.  Apparently, they keep the tiny window mount a/c unit off when the room isn’t occupied.  The same goes for the refrigerator, which was off and open when I entered the room.  I promptly cranked the a/c to maximum speed and set it to the lowest temperature.  I also turned the ceiling fan on high, but it took over 2 hour for the room to cool enough to be just slightly cooler than the outside ambient temperature.

Facing into the room, looking left (next to the closet with the fridge), is the bathroom. 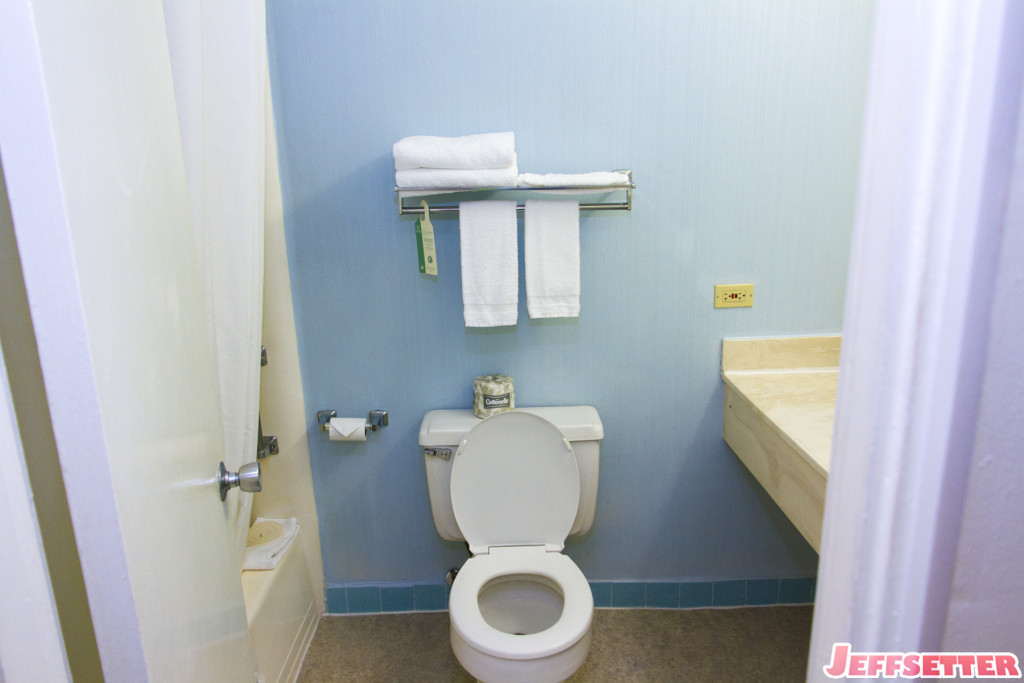 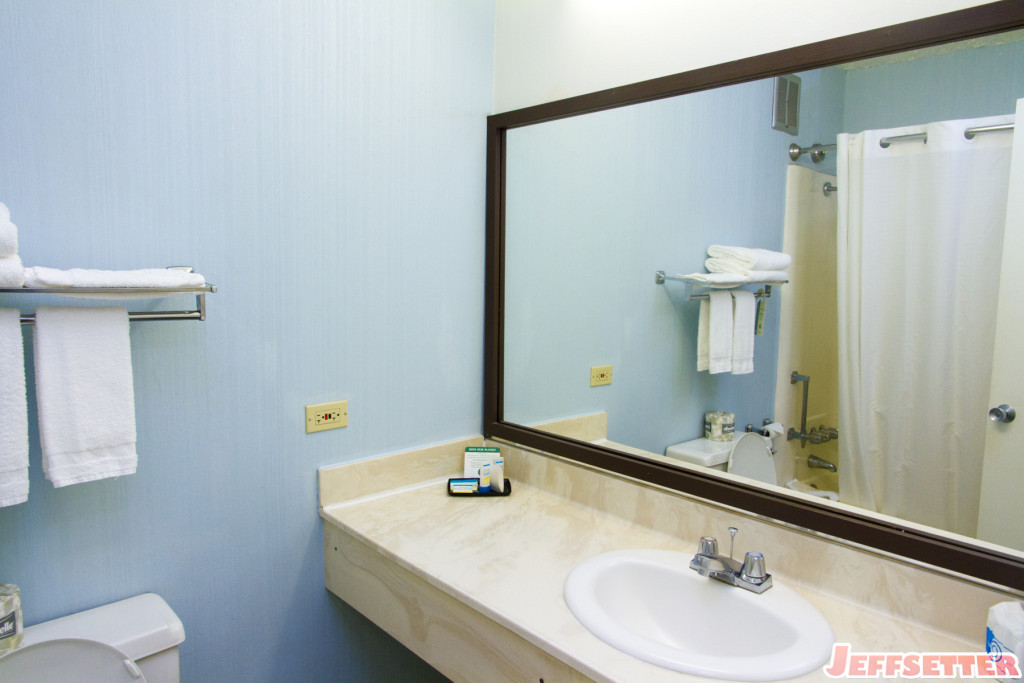 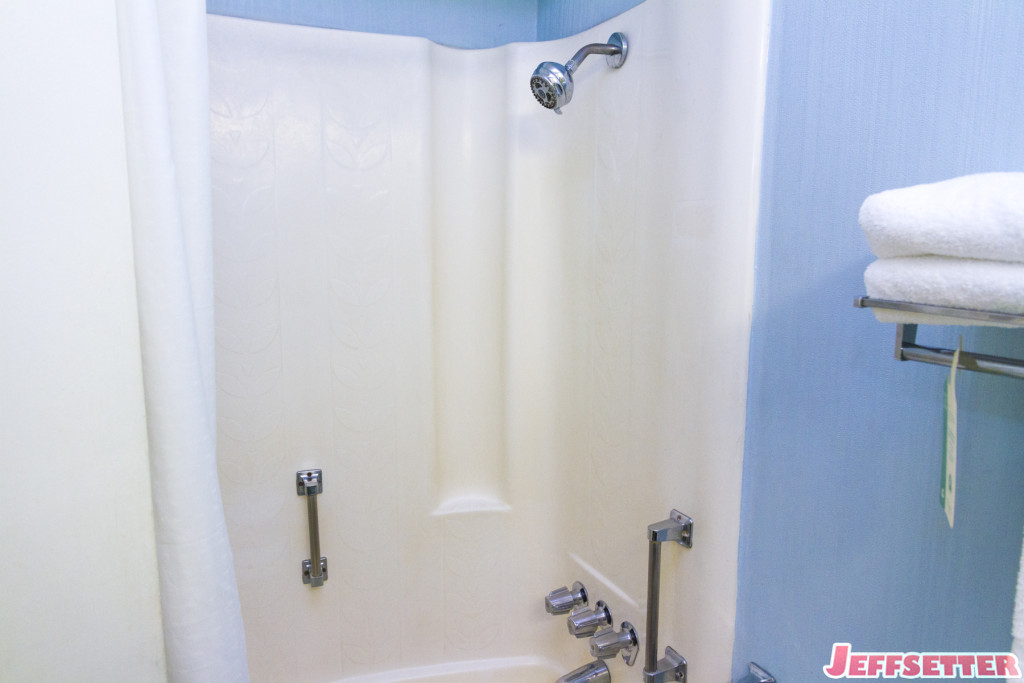 The bathroom was small, but not as claustrophobic as some others I’ve seen.  The vanity was a good size, though the toiletries were pretty poor.  The shower/tub felt really cheap and flimsy; it made a really hollow sound and felt like you’d break it if you hit it hard enough.  The water pressure and temperature were ok.  Honestly, the toilet paper dispenser was mounted in a strange position… It would have been better if it were mounted on the vanity so you don’t have to reach behind you to get to it. 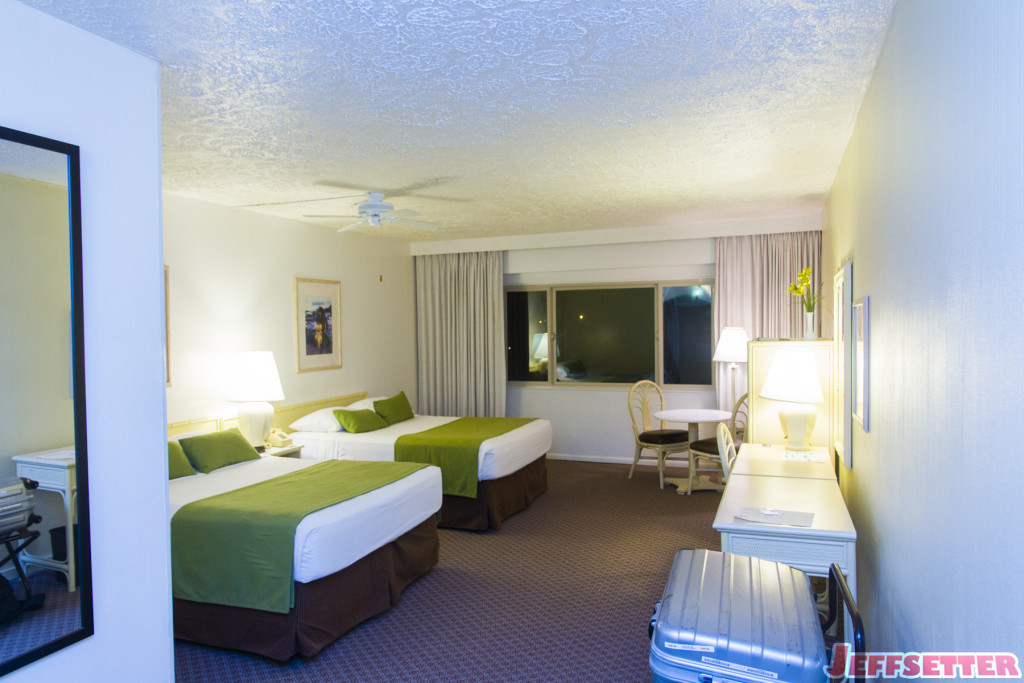 The rest of the room basically looks like the website images, but cheaper somehow.  This is probably because all of the furniture was painted white and looked like something out of a Hawaii resort from the 80’s. 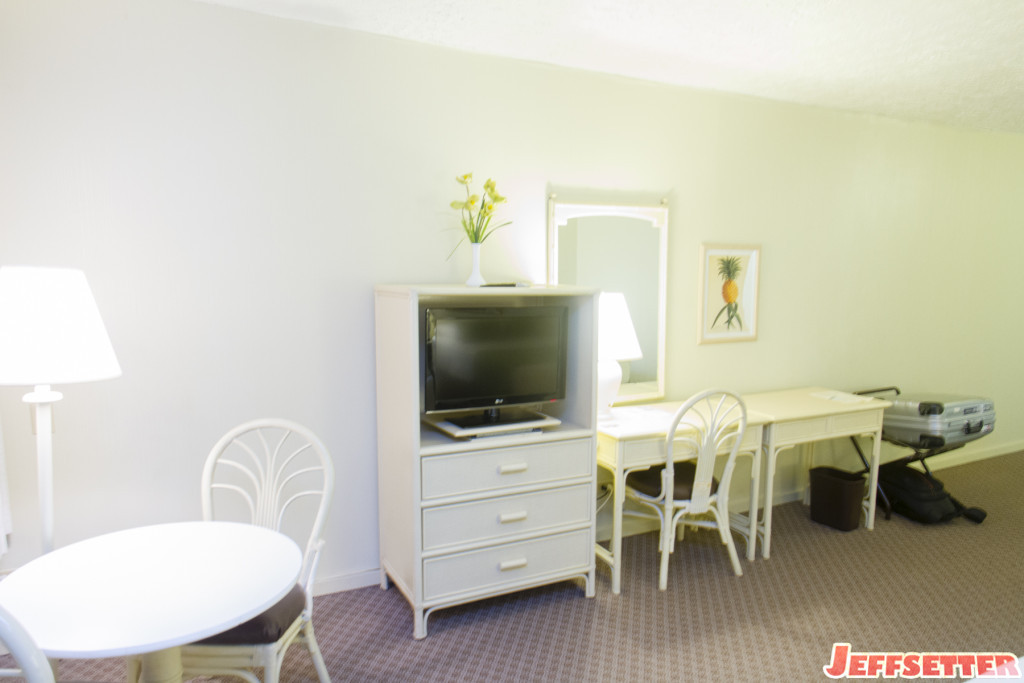 There’s a small flatscreen TV on a small dresser.  Next to it is a set of desks with a single chair, and on the other side is a round table with two more chairs. 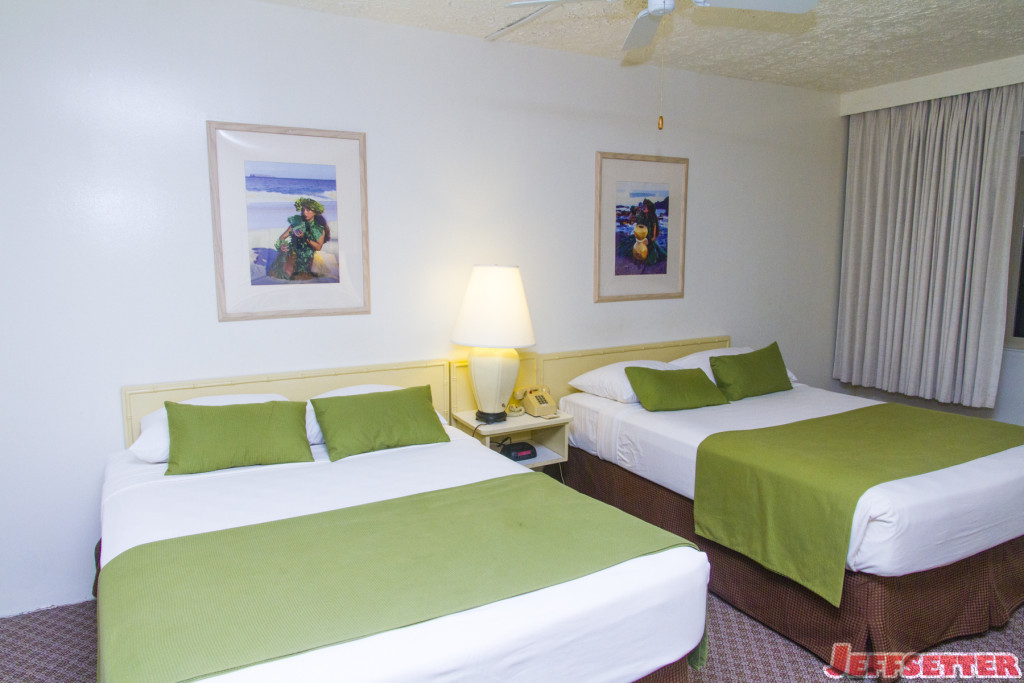 Between the beds is a single nightstand with a clock radio, a lamp, and a really old school phone.  This was actually very indicative of the overall tech in the room.  While there was a modern HDTV in the room, it was connected to a terribly low-quality signal.  And though there’s free WiFi throughout, it was insanely slow and even difficult to connect to at times. 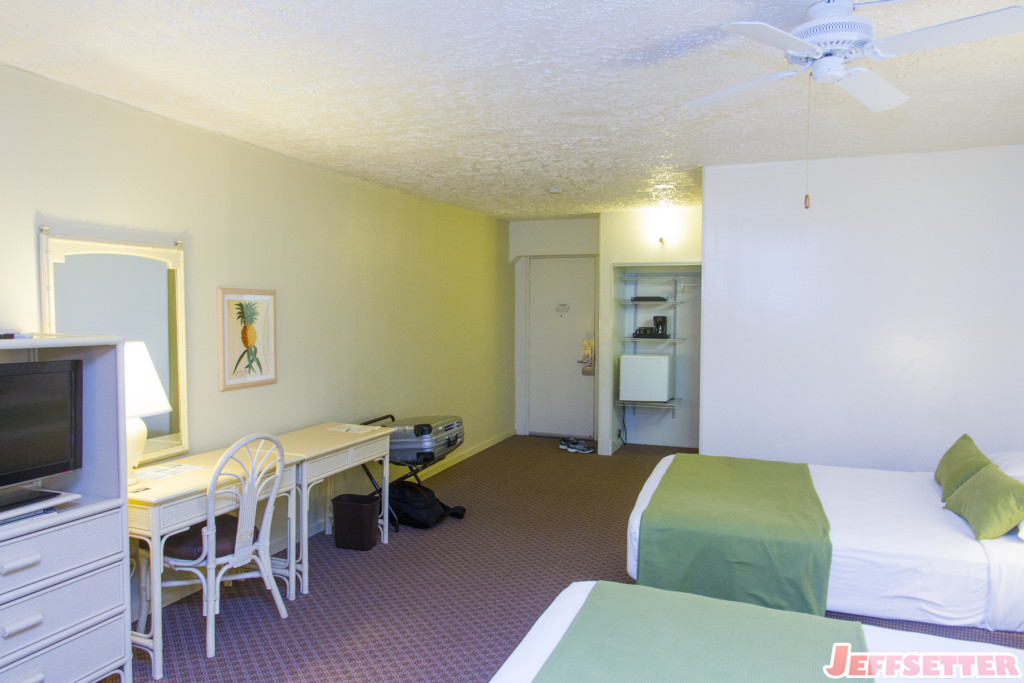 As you can probably gather from the review thus far, this hotel  wasn’t a favorite of mine.  In fact I didn’t like the hotel at all… It didn’t meet any of my minimal criteria, but then again, perhaps I’m a bit stuck up?  But is it too much to ask to be able to walk into a room that’s a comfortable temperature?  Don’t get me wrong, I feel bad giving the Maui Seaside a poor review, as it has been owned and operated by the same local family for its entire history.  Unfortunately, the property just doesn’t meet my standards and isn’t a place I’d be able to recommend to anyone.

As I hinted earlier, I believe you get what you pay for, and this is clearly true with the Maui Seaside.  $100/night (or even $144/night at rack rate) isn’t exactly cheap, but when compared to other hotels on the island, it is really cheap.  Despite this, I would never stay here on my own.  I’d much rather pay a bit more and stay at the Courtyard by Marriott Maui Kahului Airport hotel.  It’s also a limited service hotel, and while I hate the Bistro, at least I know what I’m getting… Oh, and the room is nice and cold when I walk in ?

But if you’re a budget minded traveler and won’t be spending much time in your room, and/or don’t mind walking into a  hot room, then you may like Maui Seaside hotel.  The prices is definitely among the lowest on Maui, just know what you’re getting.