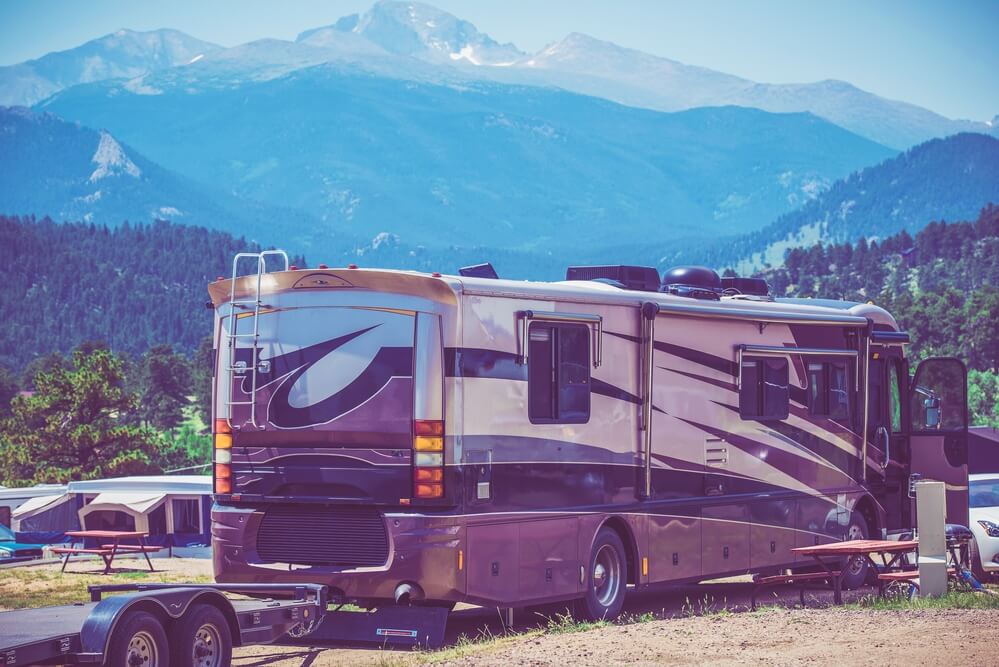 All of our reviews are based on exhaustive research, industry experience and whenever possible, hands-on testing. When you make a purchase using one of our chosen links we’ll a small percentage of the proceeds. This supports the site and keeps Jeffsetter running. You can read more here.

Coaches, and no not the sports type, are a vehicle classification used for both buses and Recreational Vehicles or RVs. A coach, mini-coach, and motorcoach all refer to the various types of buses and RVs one will see on the road.

Yet, why are RVs in particular, called coaches?

The use of the word coach to describe buses and RVs today is a carry-over from the times when horse-pulled coaches and carriages were the main forms of transportation. When buses were first introduced, they were also called coaches and the name made its way to larger RVs share a lot in common with buses.

Still, there’s more to the story than that and the first important distinction to make is that while all motor coaches are RVs, not all RVs are motor coaches. What makes an RV a motor coach is also what makes a bus a coach, and to understand exactly why this is, let’s take a closer look at the horse drawn carriages of the 15th century that they were named after.

Contents show
Historical Background Of Coaches
What About Coaches Today?
How Are Motor Coaches Different?
Are All Motor Coaches RVs?
Closing Thoughts

The term coach and carriage were once interchangeable. They both represented the horse-drawn vehicles that defined the latter half of the pre-modern era.

With their origins being in Hungary, they quickly spread into England in the mid 15th century, the rest of Europe in the 16th century, and colonial America in the 17th century. Cabs for hire, political figures and royalty all used them. They were the primary source of travel, with most carrying up to 4 people and some being able to carry 6.

What About Coaches Today?

The use of the word coach today to describe buses and RVs is a natural progression from their use in describing the primary forms of transportation that preceded them.

What makes an RV or bus a coach is essentially what made a horse-drawn carriage a coach. That being the functionality of the vehicle. Buses today are an important form of public transportation, so important in fact that in 2020 and 2021, the Congressional Research Service noted that funding for buses and bus facilities was increased by about $300 million dollars.

It’s no wonder that buses are so busy. From stop to stop they are often crowded with passengers going to and from their destinations. What bus coaches offer are more privatized services and long-distance travel without routine paths and stops. They are also not confined to certain counties or districts making them perfect for travel between different cities.

The same qualities that made coaches what they were in the 15th century is what defines coaches today. While the vehicle specifications between a bus and a bus coach are similar or at times identical, their functionality is what separates the two. The same rule applies to RVs and their own classification of coaches, motor coaches.

How Are Motor Coaches Different?

We are all familiar with the different classifications of RVs. Travel Trailers, Fifth Wheelers, Class Cs, Class Bs, and Class As all make up the traditional RV family we are used to.

However, when an RV is called a coach or a motor coach, it is referencing a type of RV not included in the aforementioned grouping.

Motor coaches refer to a type of RV that is a hybrid between a Class A and a bus. They are larger (both in terms of length and their average height) than typical class As, generally being around 40 plus feet long, this allows them to feature all the normal amenities one would expect in an RV, but with lots of extra gadgets and more space.

A great example of this is the American Eagle by American Coach. The resemblance to coach buses can be clearly seen when looking at the American Eagle’s exterior. But this goes beyond just the surface as the vehicle’s chassis is custom built by Freightliner, the same manufacturer for many coach and commercial bus chassis.

Are All Motor Coaches RVs?

All motor coaches are RVs but not all RVs are motor coaches. What makes the American Eagle a motor coach is that it is built from one, not just in appearance, but in everything from its chassis, engine and functionality.

Traditional motor coaches are also recreational vehicles and are great for use in comfortable long-distance transportation.

An RV, however, becomes a motor coach when it infuses on the road living, with the luxurious comfort of a coach. When looking at motor coach RVs like the American Eagle, we see comfort and luxury taken to a new level that rival the luxury of RVs from any class!

The interior living spaces often come with heated tile flooring, theater seating sofas, and large sofa pull-out beds- sometimes even murphy beds. The kitchen includes a dishwasher and a 4-door refrigerator/freezer that include water and ice dispensers. The shower space is usually separate from the bathroom and much larger than those in traditional RVs. Not to mention that these rigs also typically contain a master suite with a king size mattress. For entertainment, large LED TVs are found in the living room and master suite.

Comfort extends beyond just the interior spaces though, even when driving one will often find the driver’s and passenger’s seat to be heated.

To make long distance drives more comfortable, electronic cruise control is also included. When driving for hours on a long empty road, constantly controlling the accelerator pedal can be tiresome. Cruise Control works by electronically controlling the speed of a vehicle without needing the driver to control the pedal. That way, the RV can cruise at a set speed while also considering the distance of the vehicle in front of it with no required effort needed from the driver.

Long distance comfort defined the horse-drawn coaches of the past. Just as it now defines both the coach buses that take passengers between cities, and the motor coach RVs that bring luxury to camping it also help to keep the name alive.

RVs are called coaches when they are built with the qualities of a coach in mind. A coach and ease of traveling go hand in hand, it applies to carriages, buses and RVs alike. This is not to say that the only comfortable RVs are coaches, but that coaches prioritize comfort to the point of luxury.

They also prioritize having a steep price point, but that is to be expected as they sit proudly at the top of the RV food chain. RV coaches are impressive in their size, appearance, and in all the amenities and features that are included.  With 40 plus feet of pure comfort, we’ve come a very long way from the coaches of the past!