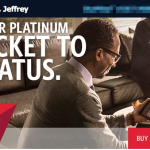 2014 has been a year of transition for me. From my threats to leave the state of Minnesota to avoid an airline to actually moving to San Francisco, life has been one great adventure in 2014. I successfully challenged to United Platinum status, only to realize that I don’t really love flying United. While I thought that United Platinum status would come at the expense of … END_OF_DOCUMENT_TOKEN_TO_BE_REPLACED 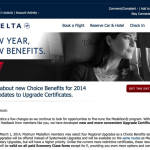 I have been a Delta Platinum Medallion for the past several years, reaching the 75,000 Medallion Qualifying Miles threshold for Platinum status fairly painlessly along the way. Usually I am somewhere between 25k to 40k short of reaching Diamond Medallion status, but elect not to go out of my way to earn the 125,000 MQM’s needed to reach Diamond status. Instead, I have decided … END_OF_DOCUMENT_TOKEN_TO_BE_REPLACED 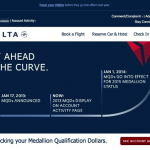 At this point in the year I have a choice between remaining a Platinum Medallion with Delta in 2014 or going for Diamond Medallion status. Like each of the past several years, I am going to choose to stay Platinum and let any miles I receive over the 75,000 mile platinum Threshold roll-over for earning status next year. This means that instead of accepting the 15,000 MQM bonus … END_OF_DOCUMENT_TOKEN_TO_BE_REPLACED