I needed to stay in a different hotel than my primary one for one night in Vegas.  And my choice of hotel ended up being the Delano Las Vegas.

As I mentioned in my Las Vegas 2018 trip report introduction, I traveled to Vegas for a conference.  However, my travel plans changed and I needed a room for an additional night.  The problem, though, was that the night I needed happened to be Cinco de Mayo.  And as one of the largest holidays in Sin City, the rates skyrocketed for that single night.  As a result, my rate at the Cosmopolitan soared to over $550 from $290, and I wasn’t about to pay that rate.  So I chose to spend a night at the Delano Las Vegas instead based on its overall value.

I’m an M Life Gold member thanks to my World of Hyatt Globalist status.  And thanks to that and my gaming activity from last year, I had comp nights available at the Delano.  But, because of the holiday, I wouldn’t be able to get the night for free.  Instead, I was offered a discounted rate, as well as a $50 per night resort credit.  So in the end, I ended up paying just over $400 for the room, resort fee, tax, guaranteed 6 a.m. early check-in, and a dinner at Sage at Aria that I charged to the room.

The Delano Las Vegas is a hotel within a hotel, sort of.  It is a separate tower at the Mandalay Bay Resort, unlike the Four Season Las Vegas, which is in the main tower.  And because of this, the Delano does not have its own casino, meaning its lobby is quieter and doesn’t smell of smoke.  However, the Delano is directly connected to the Mandalay and be reached via a short walk.

The entire Mandalay resort complex is located on the far south side of the Strip.  And, as a result, the area is quieter than other portions of the Strip.  It is not as dead, however, as the area around the SLS Las Vegas.

After picking up our car, we headed straight over to the Delano to check-in.  When we arrived, I self-parked, but later learned that Mlife Golds receive free valet parking too.  Had I known that, I would have done valet from the beginning.  Unfortunately, though, the whole parking area and porte-cochere look kind of shabby. 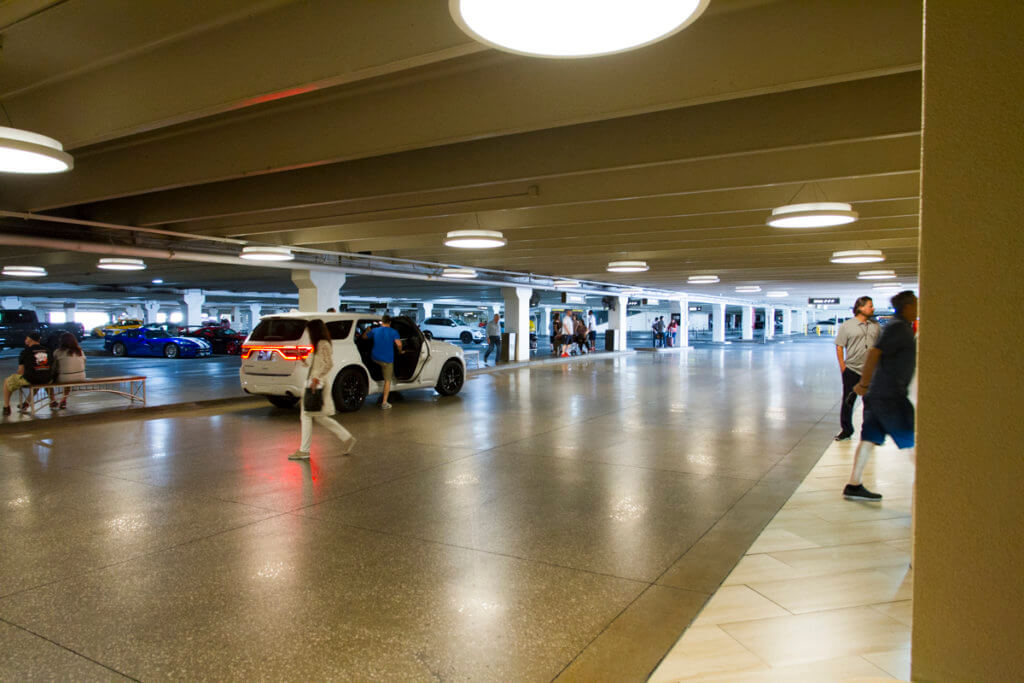 The hotel’s entrance, however, is a lot more striking.  There’s heavy use of natural materials like wood, stone, and even two large slabs of red rock. 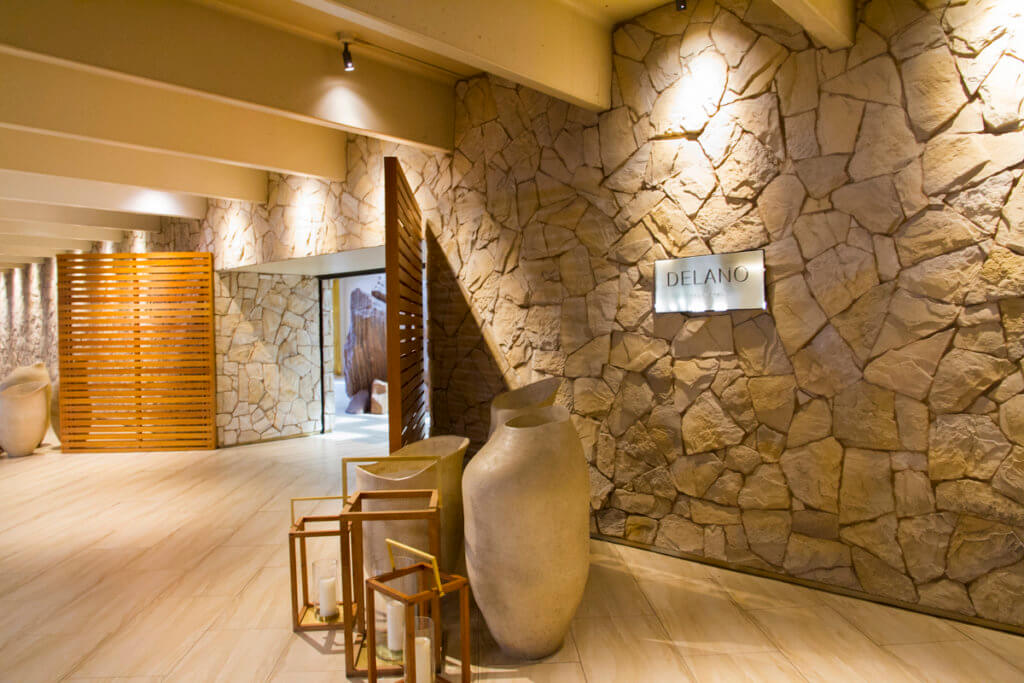 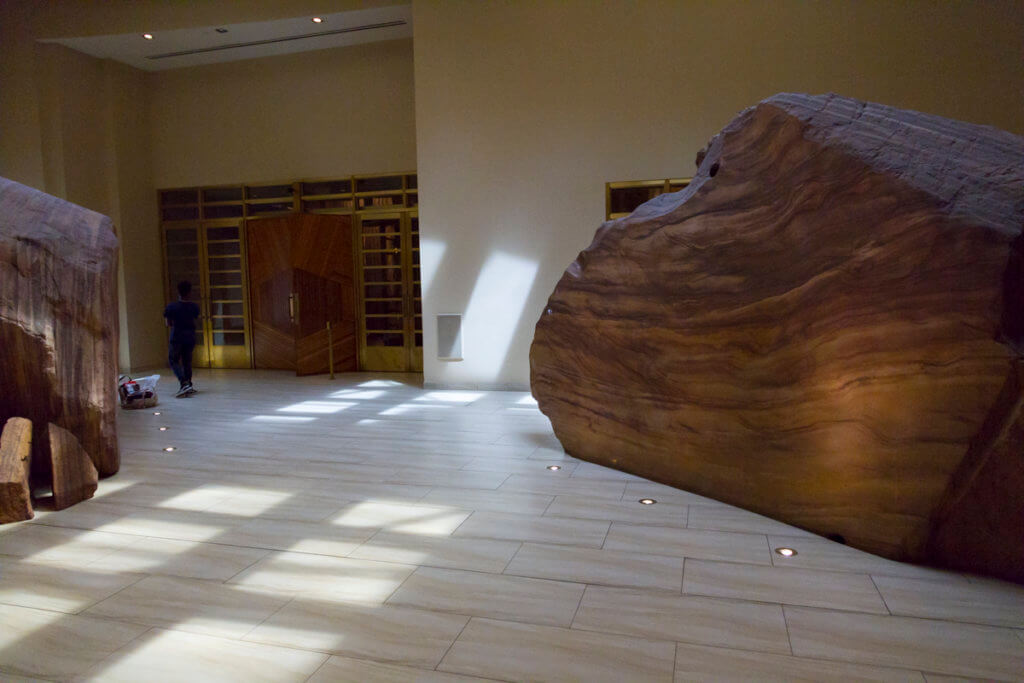 Once inside, it’s a short walk through the lobby to the front desk.  The front desk itself is located past the 3940 Coffee and Tea, and just to the left of the corridor. 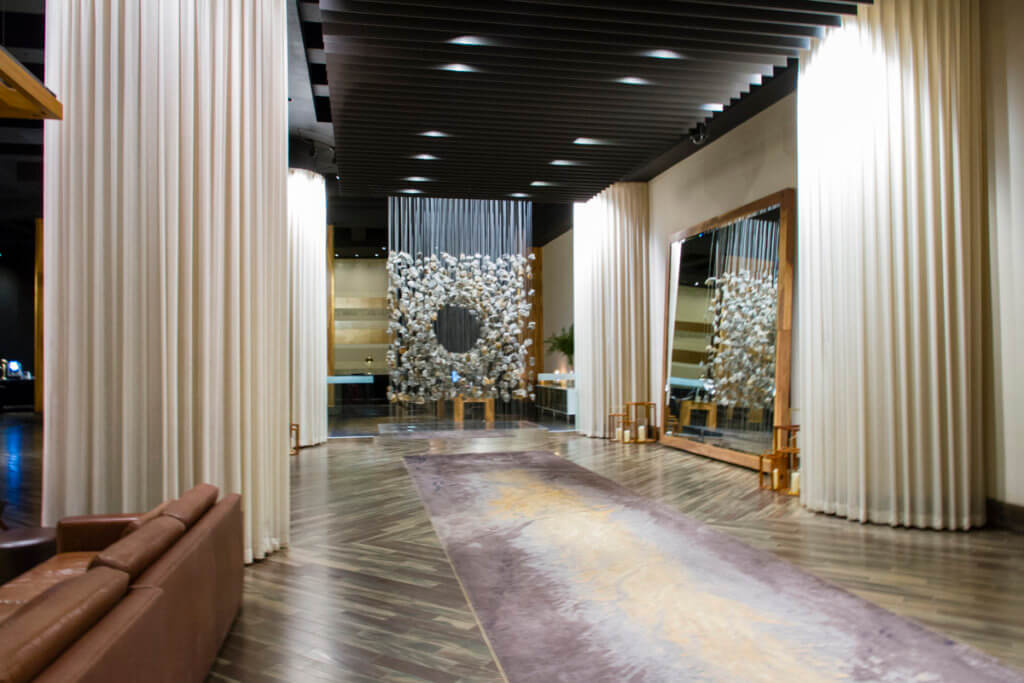 Once we reached the front desk, we were warmly greeted by an associate.  From there, we went through the standard protocol of verifying identity, payment, etc. and were then given our room assignment, keys, a map of the resort, and explanation of the resort credit.  Actually, I had checked-in online the day before, but for some reason, the app notified me I needed to check-in at the front desk anyway. 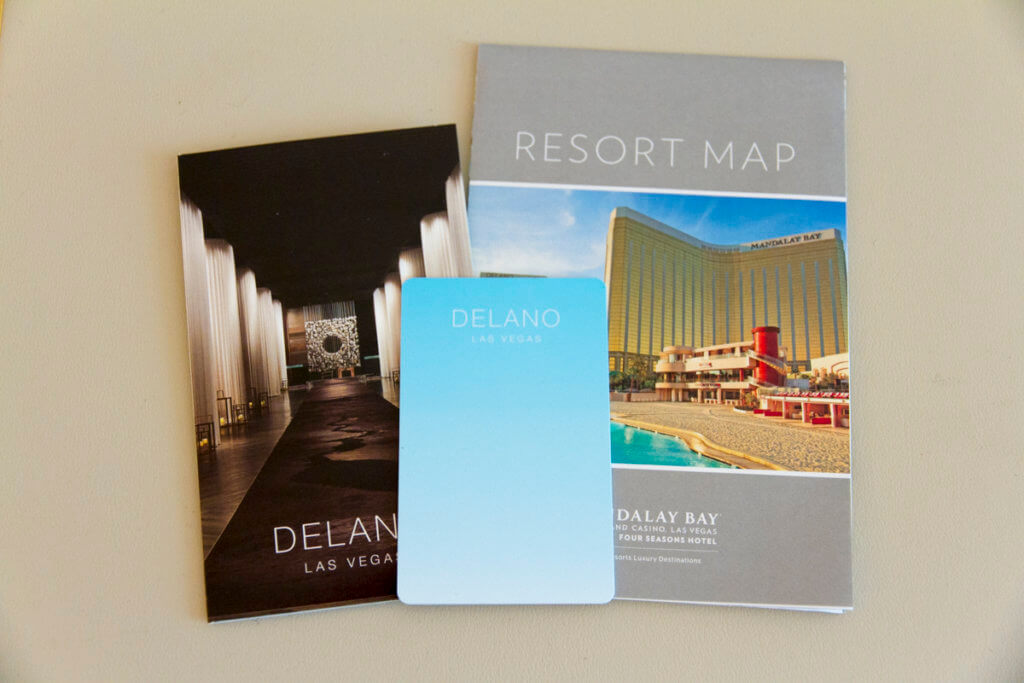 So from there, we headed right over to the elevator lobby and up to our room. 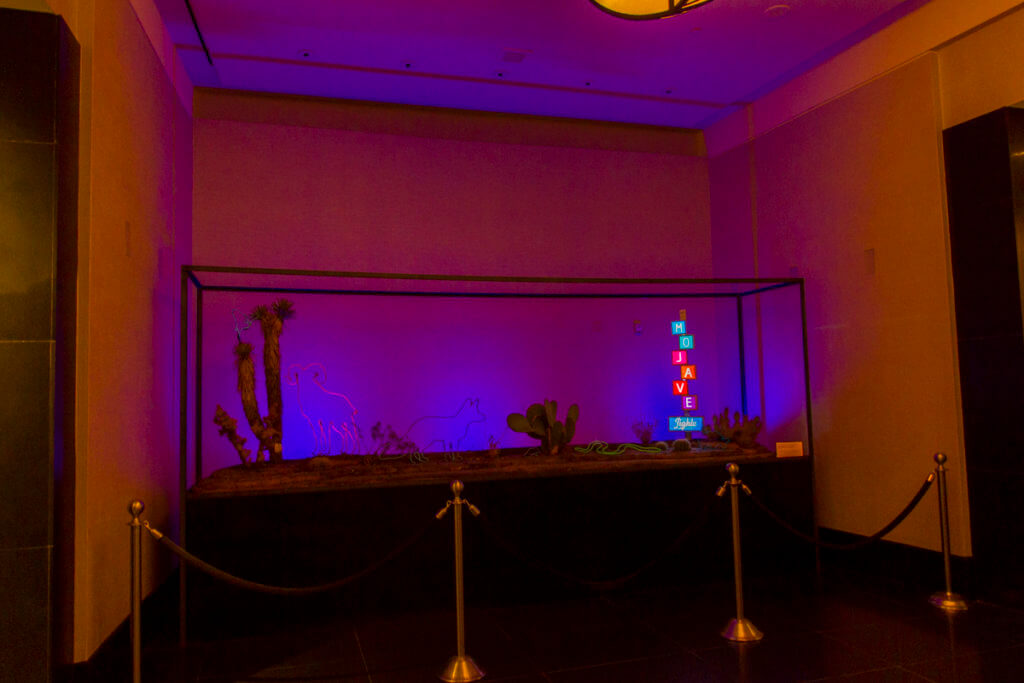 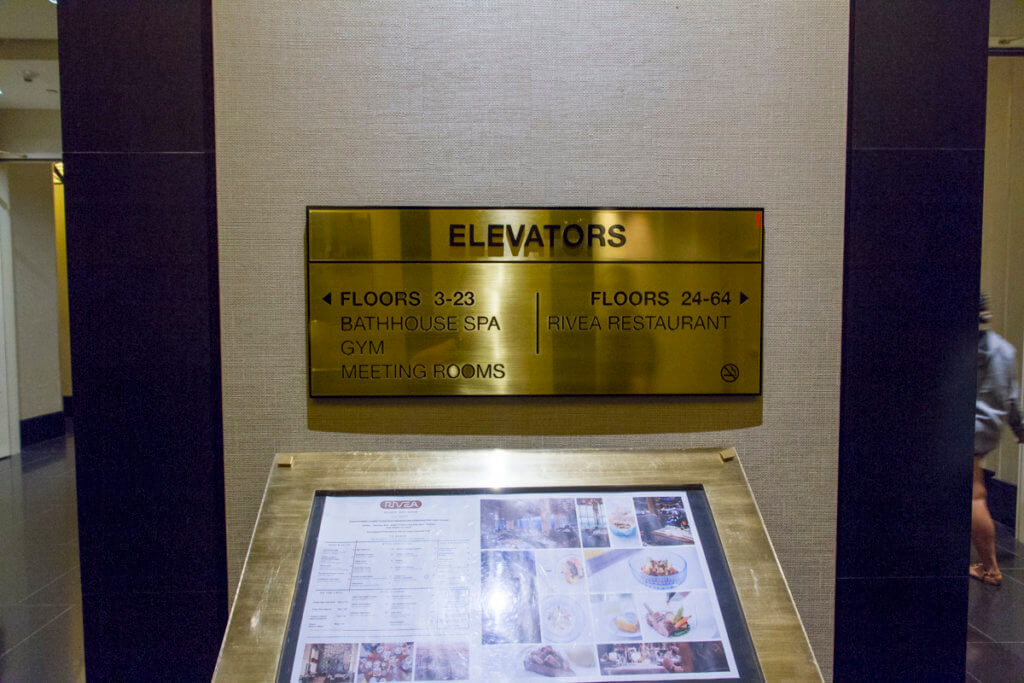 All rooms at the Delano are suites, and while there are larger suites available, the primary difference for most rooms will be the view.  I booked the base room, and that’s exactly what we got; Mlife Gold members seldom receive upgrades.  Our room was on the tenth floor, and upon exiting the elevator, it was a short walk over to our room. 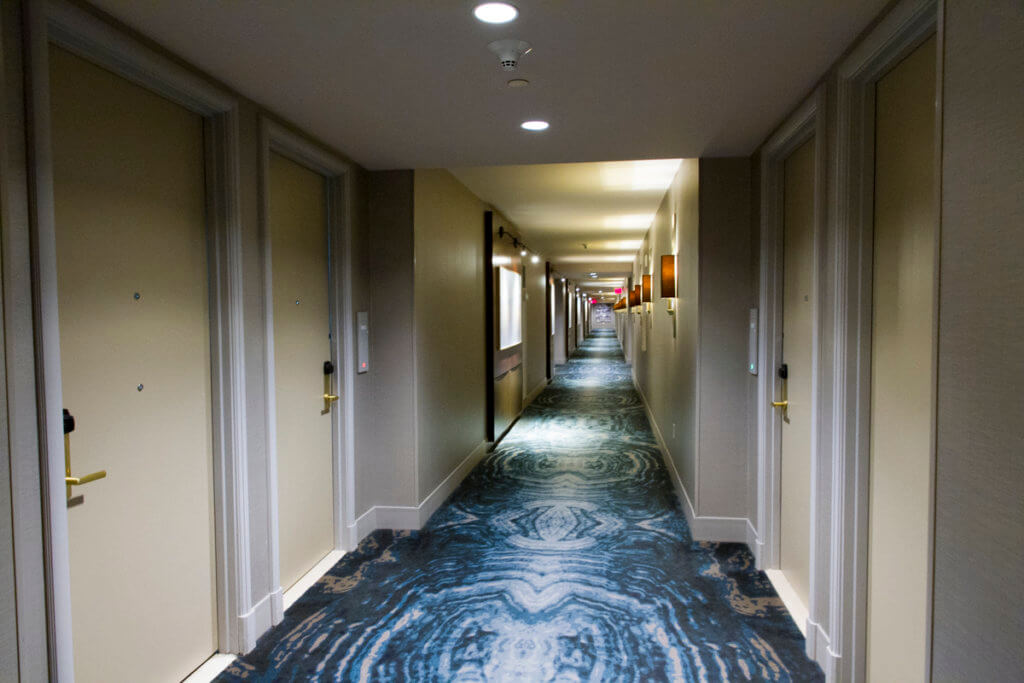 As I’ve said before, our room was a standard, 725 sq/ft, 1.5 baths, one-bedroom king suite.  Upon entry, the guest bath is immediately off to the right. 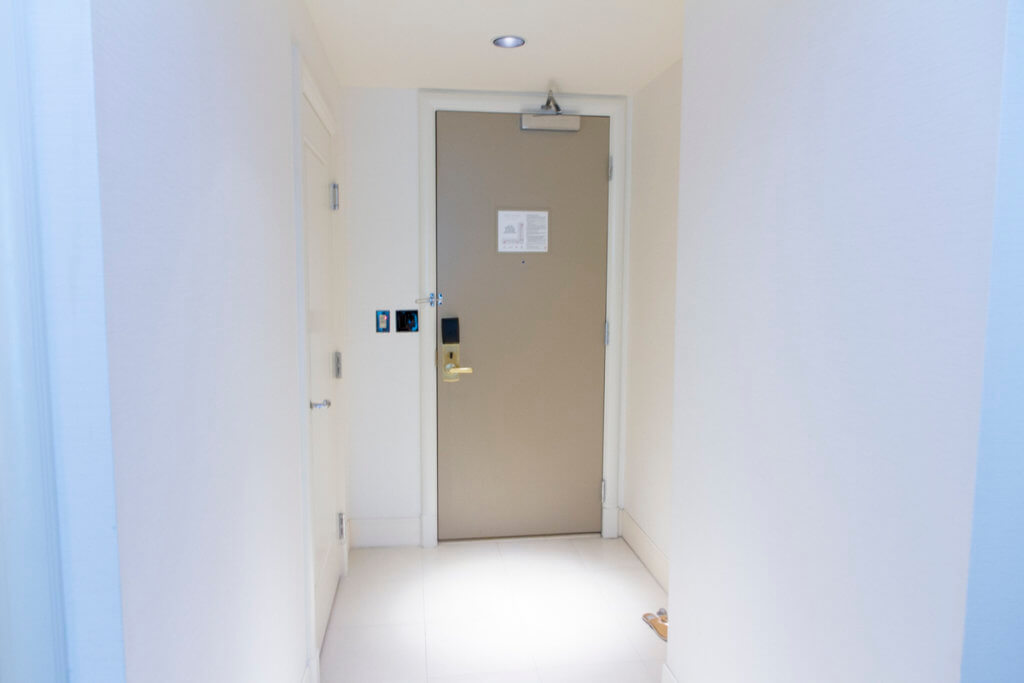 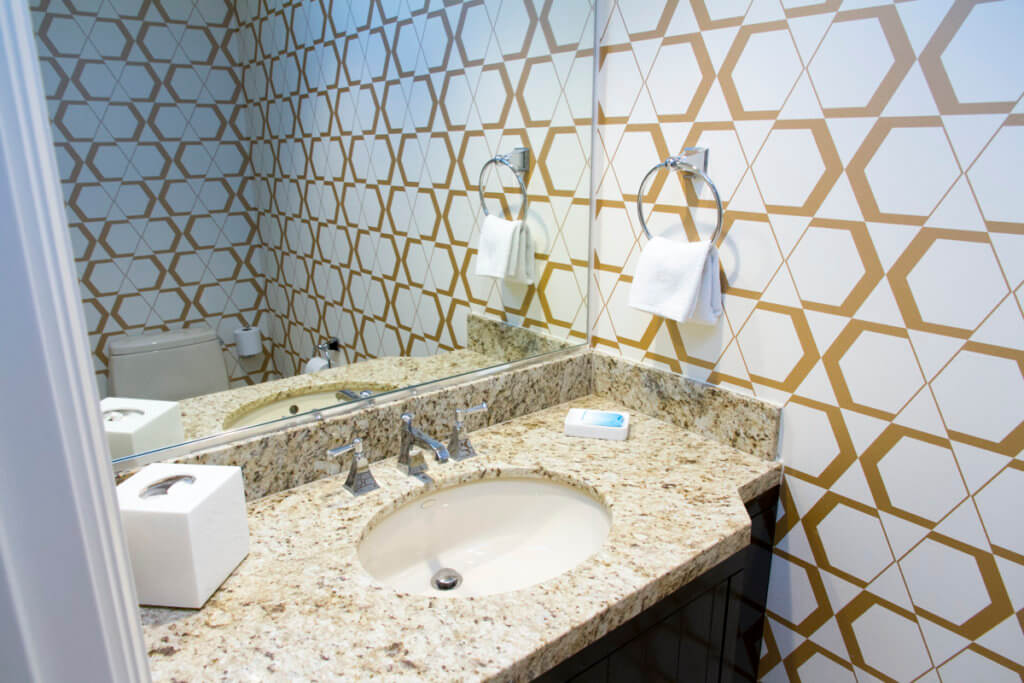 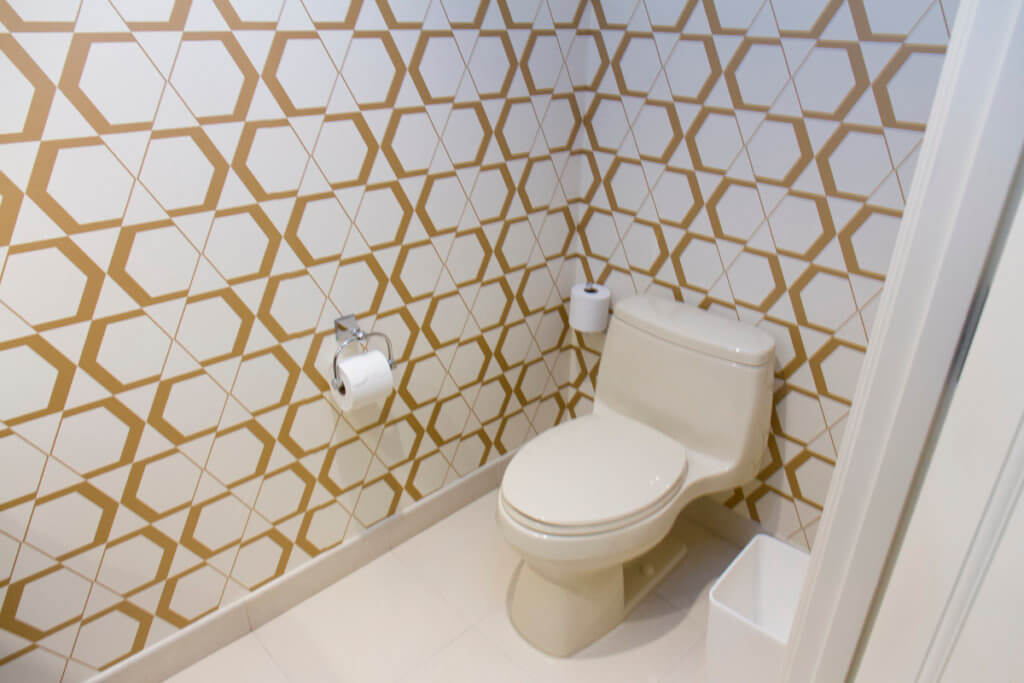 Then, the room opens up into the living room, featuring a 55″ TV, a sofa, a chair, coffee table, and a desk. 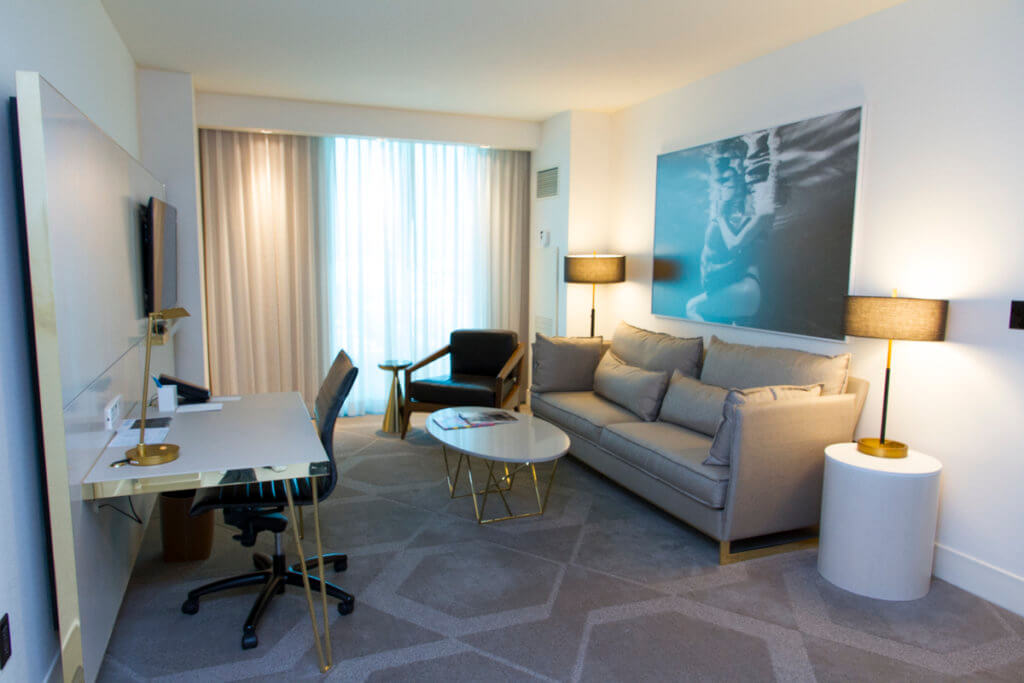 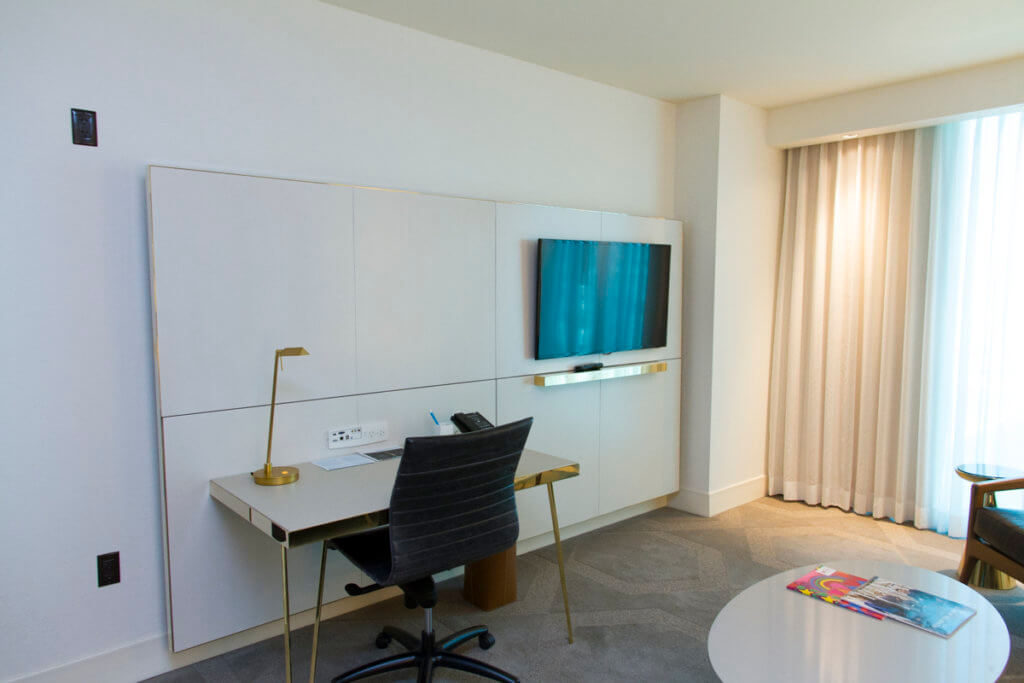 On the other side of the living room, and lining the short corridor to the bedroom is the wet bar, which also houses a Keurig and the mini bar. 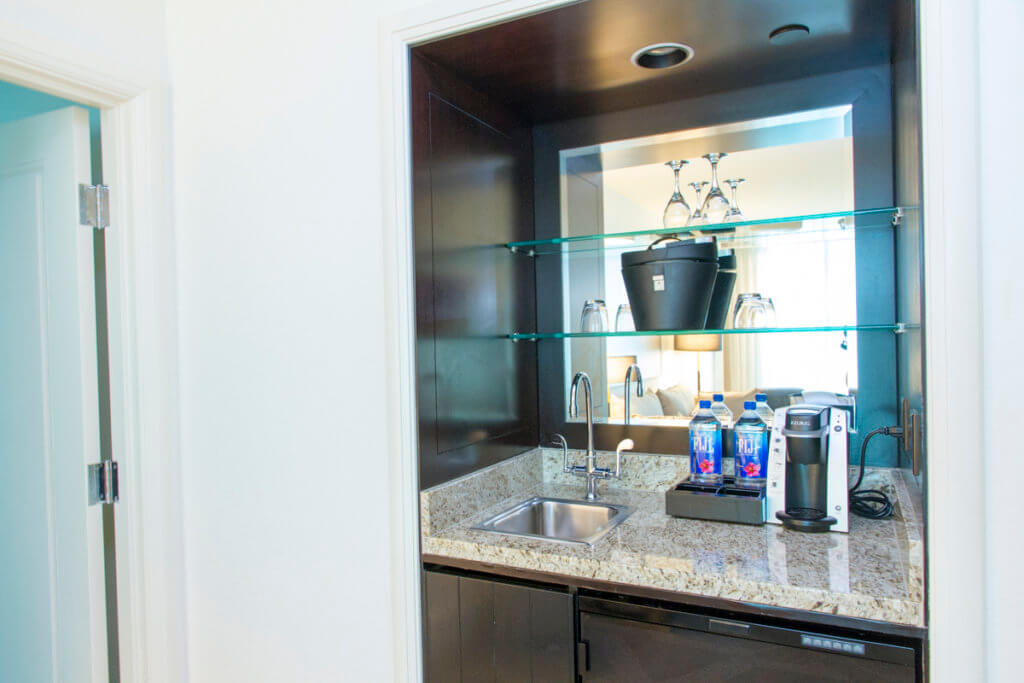 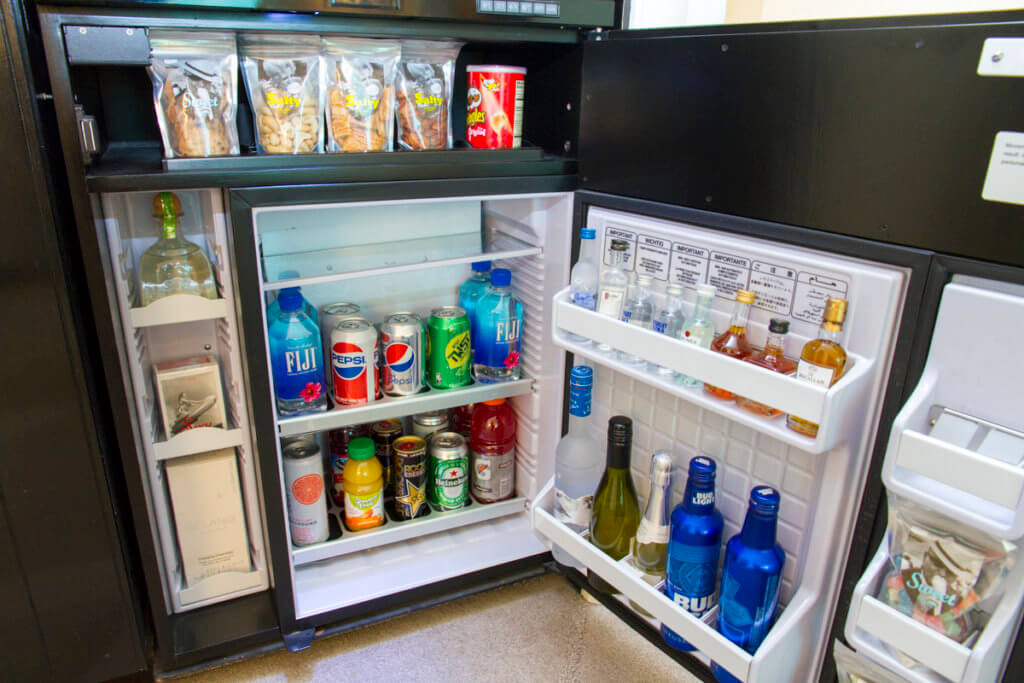 The fridge, by the way, does have a tiny amount of room for you to use and it is quiet.  You’ll see why this is important when we head over to my next hotel.  But, anyway, to the left of the bar area is the separate bedroom. 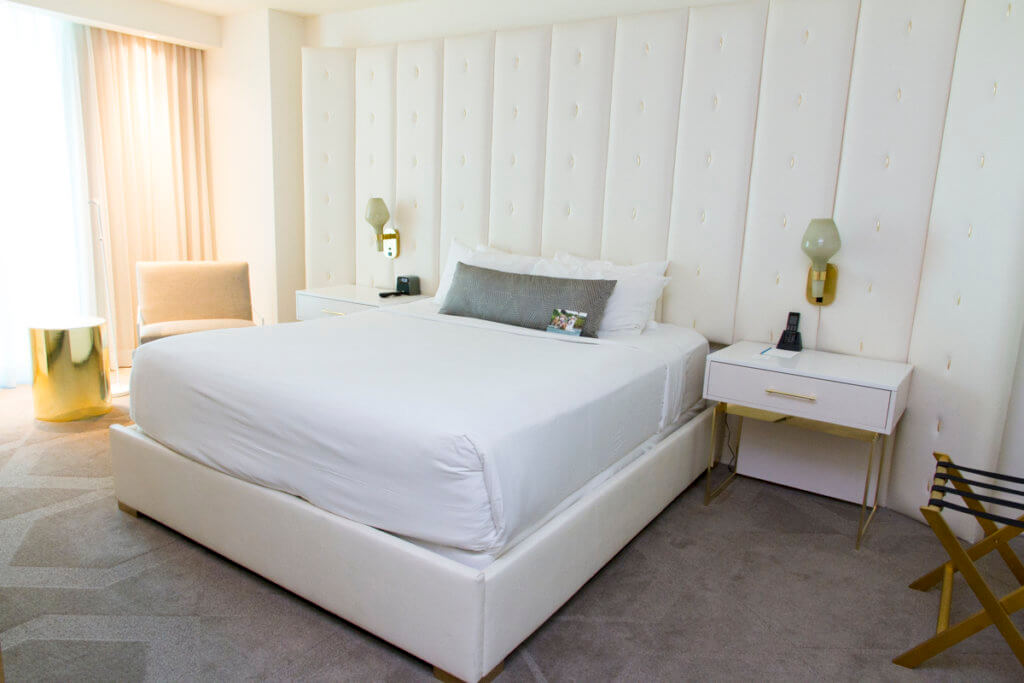 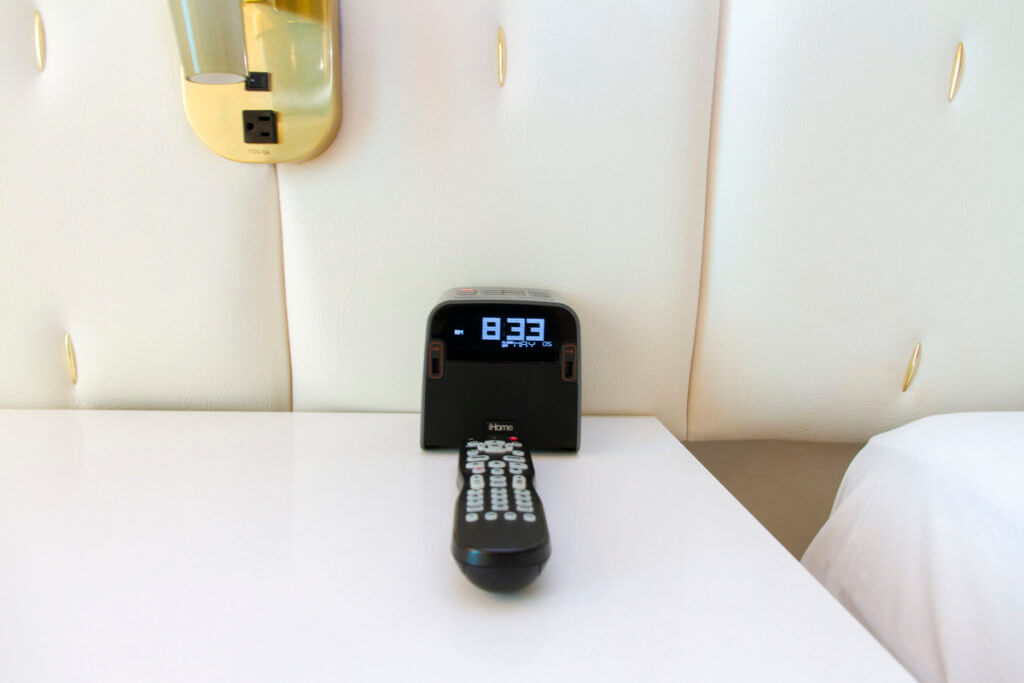 The king bed at the Delano is incredibly comfortable, with a nice plushness but good support.  It’s definitely one of my top hotel beds ever.  And, as you can see, there are two nightstands, a chair, radio alarm clock and a phone.  Across from the bed are the TV and a generous amount of closet and drawer space, one of which houses a safe, and another houses the iron and ironing board. 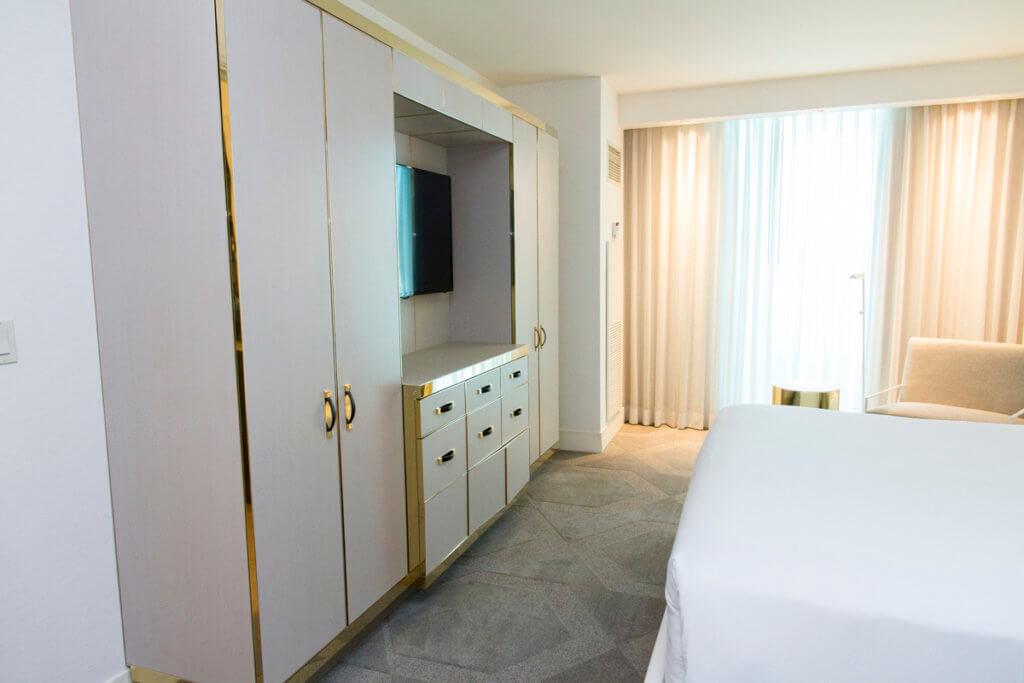 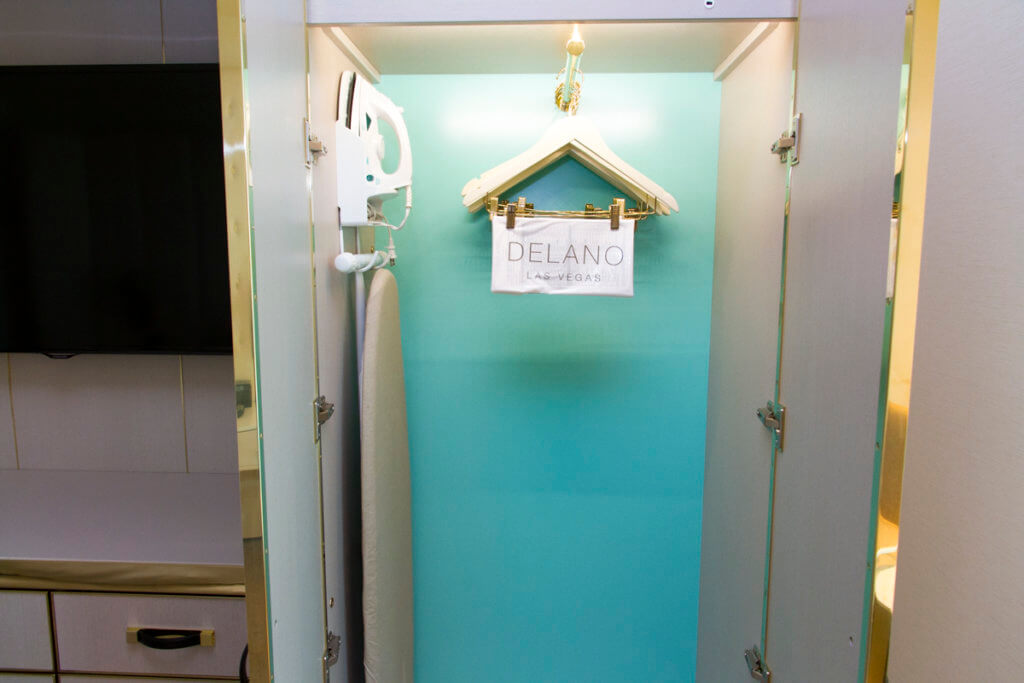 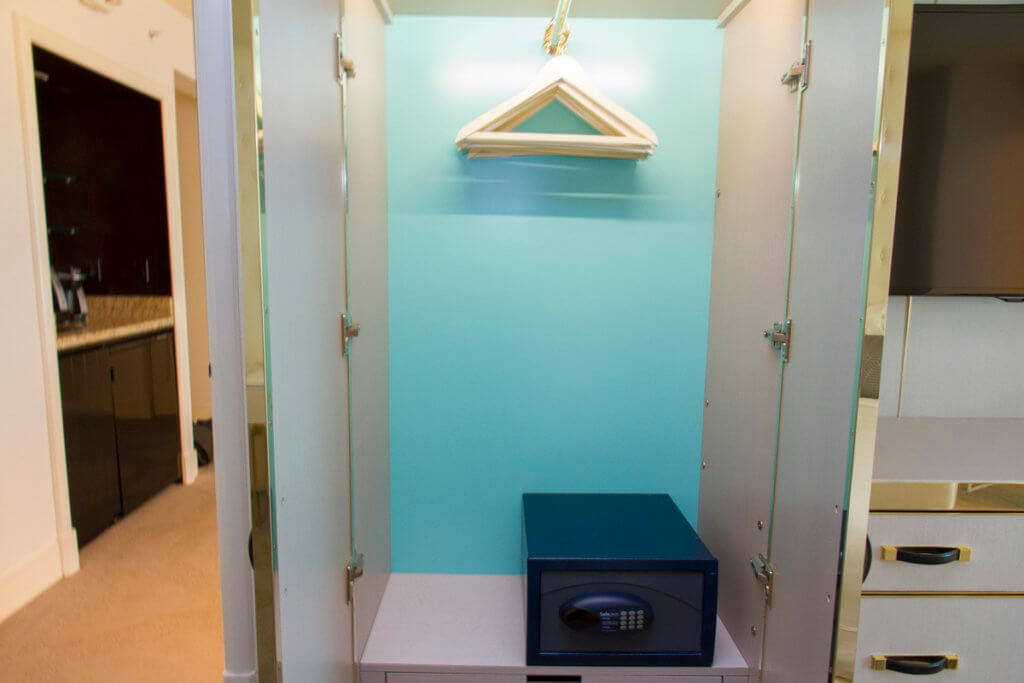 To the right of the entrance of the bedroom is the massive master bath, with a separate water closet, dual vanity, large soaking tub, and separate shower. 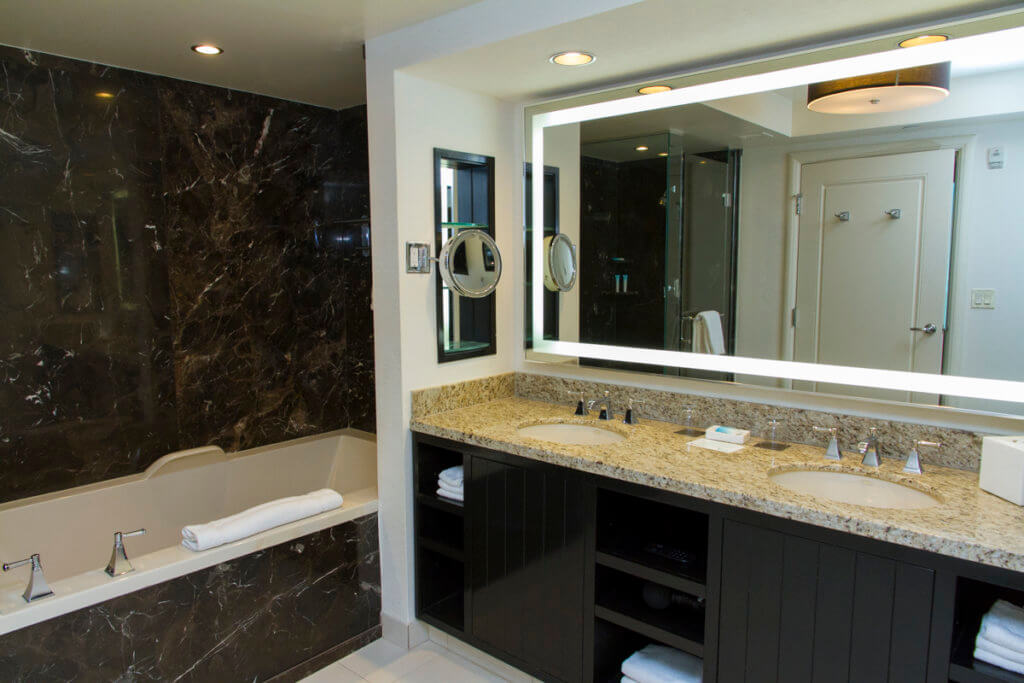 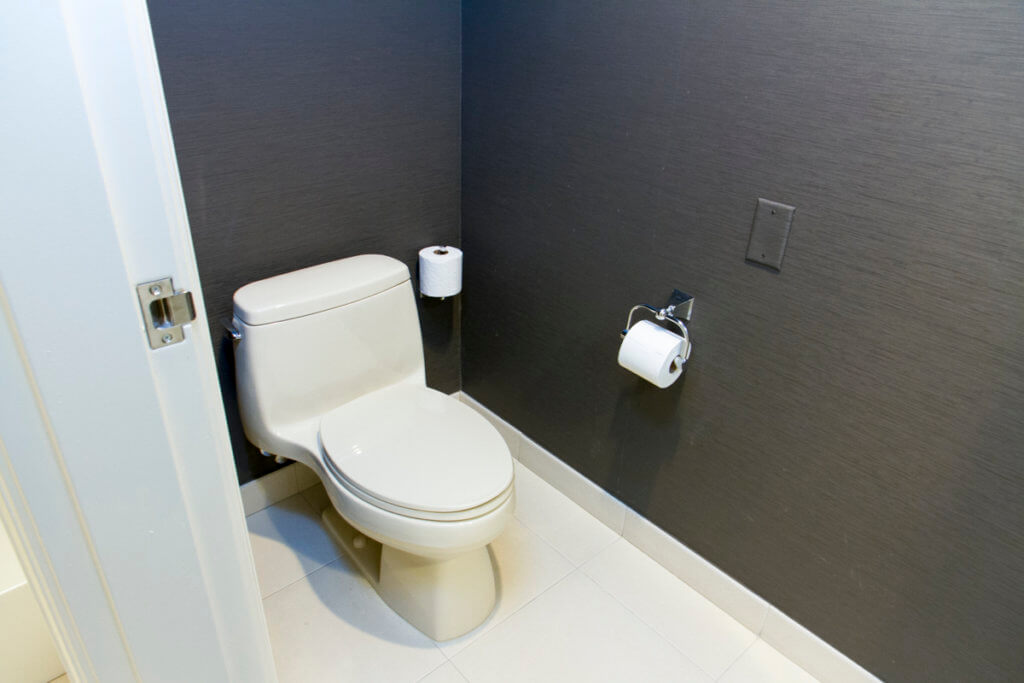 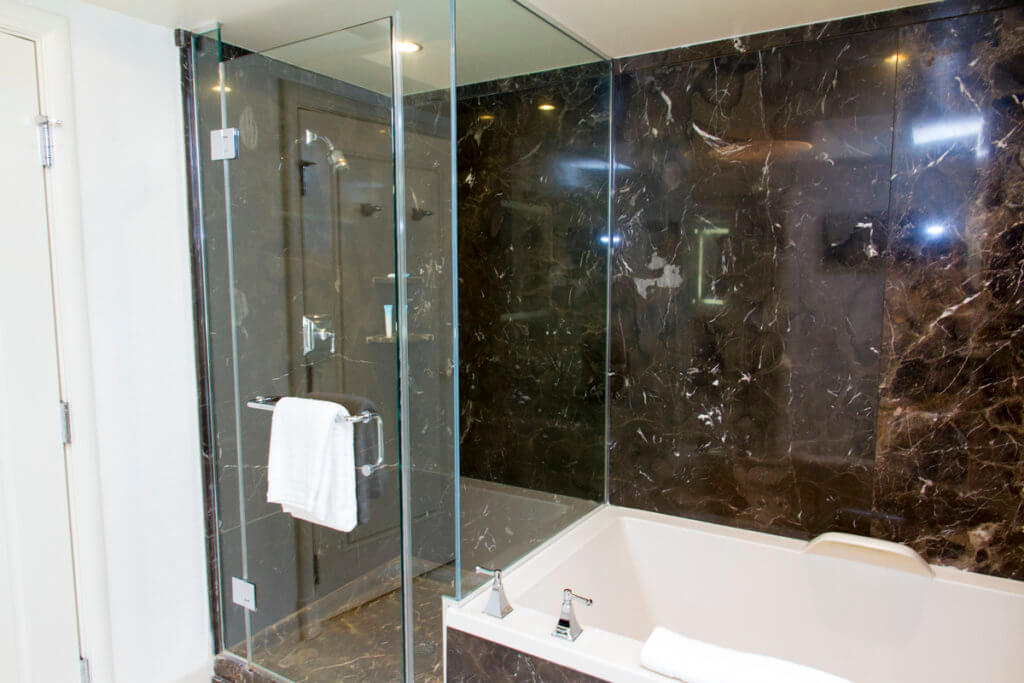 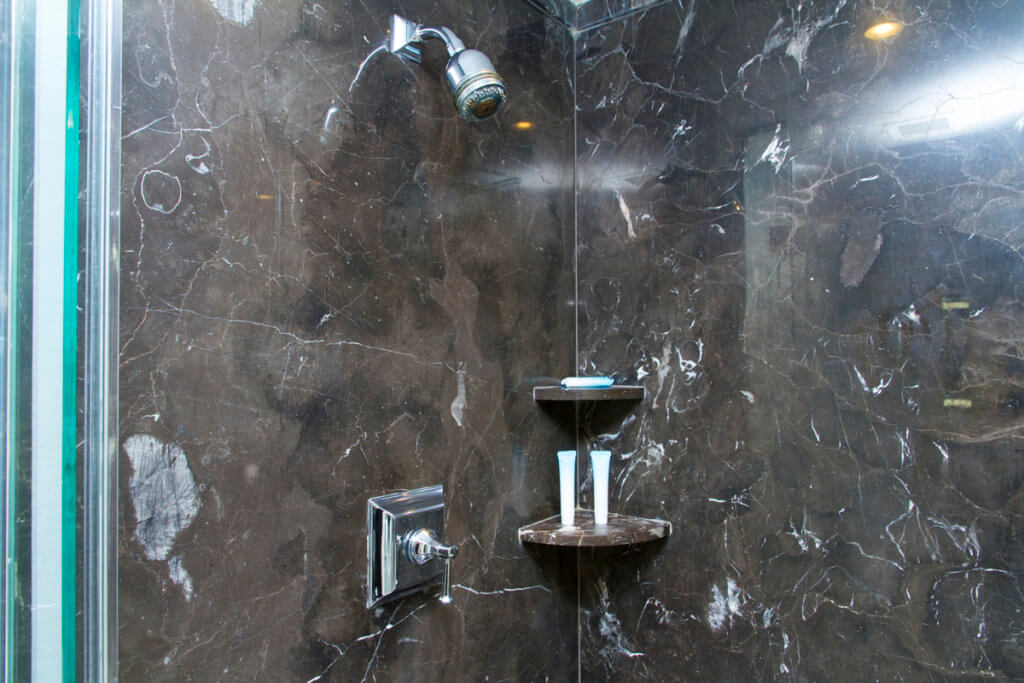 The master bath also has a third, smaller TV, and an odd feature for Vegas… A scale. 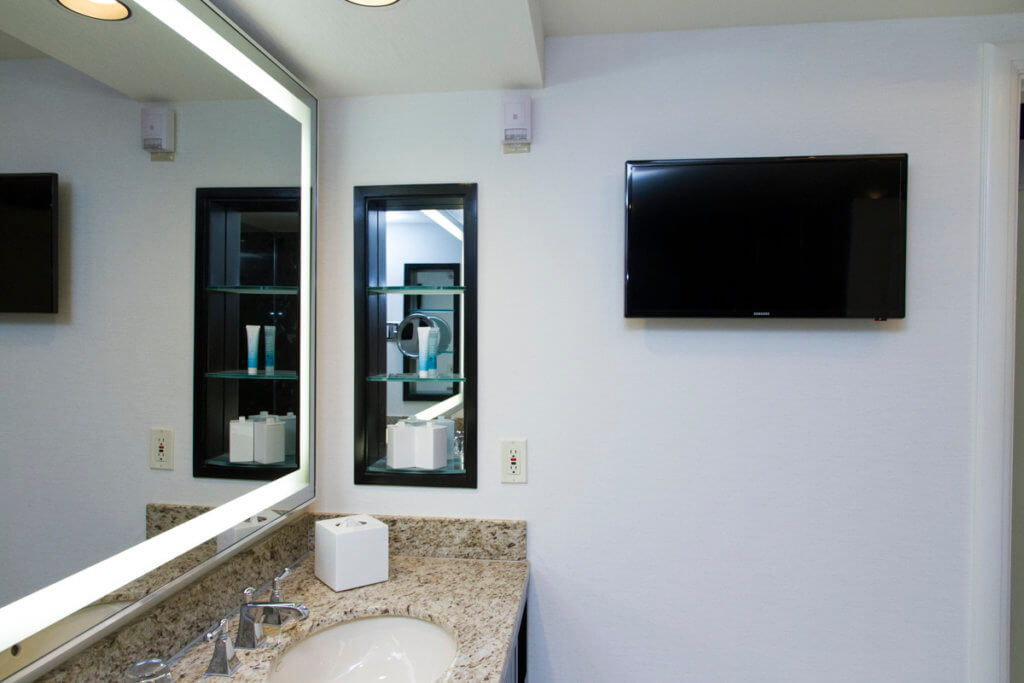 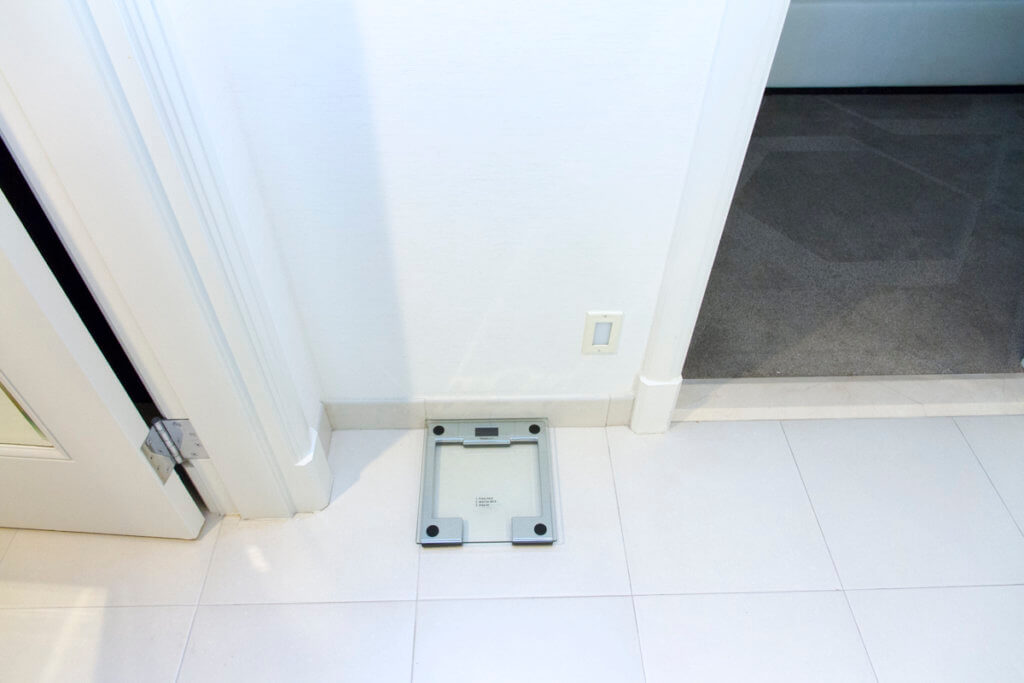 That little square just above the scale, in case you’re wondering, is a nightlight.  It’s bright enough so you can kind of see your way in the dark, but not bright enough to be a bother when you’re trying to sleep.

And, in case you’re wondering, water temperature was great.  Water pressure, on the other hand, was ok, but not great.  It was better, however than the water pressure at both the SLS Las Vegas and Aria.

The Delano has a nice amount of power outlets throughout the room, with at least one on each side of the bed and a full media panel at the desk.  Tech and power aren’t quite as good as, say, the Andaz Maui, but it is better than most other hotels I’ve stayed at.  WiFi, though, is where the Delano falls flat on its face.  Data speeds in our room were 9.62 Mbps down and 9.29 Mbps up, which pretty slow; definitely not broadband speeds.  But, those speeds are better than the data speeds at Aira, which has much slower upload speeds, while the SLS Las Vegas’ data speeds are slower overall.  And remember that safe in the closet?  Doesn’t fit a 15″ MacBook Pro.

What I do like about the tech at the Delano, though, is the privacy indicator.  Here, it’s electronic, just like at Aira.  However, the interface looks oddly dated, and the lighting is all regular, manual switches. 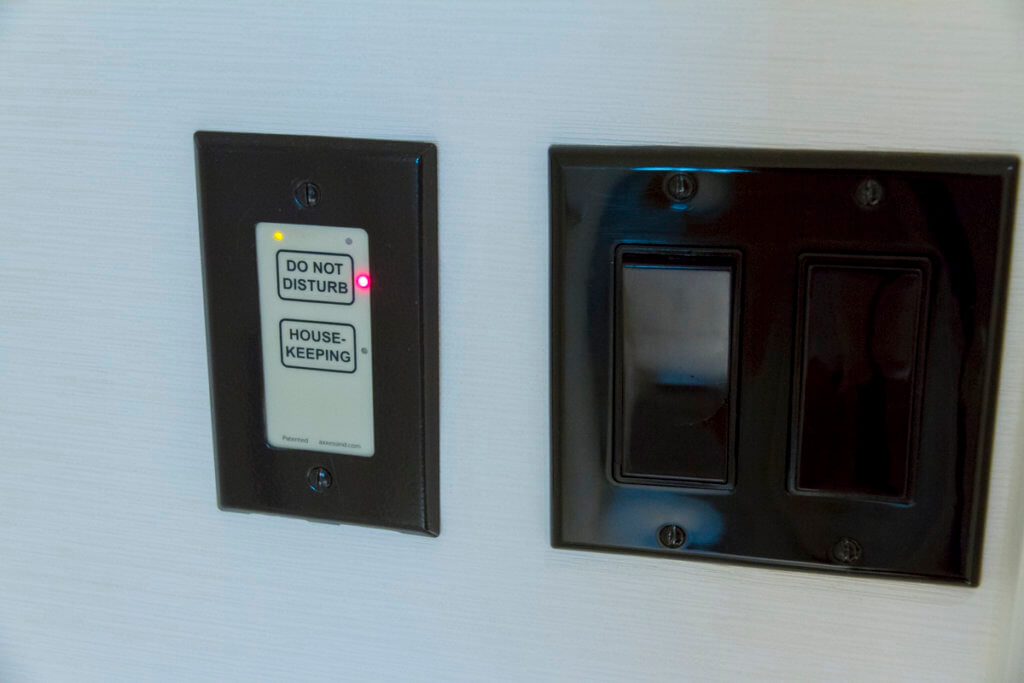 Of the two hotels we stayed at last time, Aria was my favorite.  But I always thought the interior design was a bit odd, as was the bathroom layout.  With the Delano, though, I love how the room is laid out, I love not having to walk through a huge casino to get through the hotel, and I think the rooms are thoughtfully appointed.  The interior design isn’t quite my kind of thing, as I’m not a fan of gold fixtures, but I do how relaxed, bright, and airy the rooms feel.  And, as a result, the Delano Las Vegas is now my favorite Vegas hotel.  In fact, it’ll likely be my first choice of hotel next time I’m in town.