The second hotel we stayed at in Vegas was MGM’s Aria Las Vegas Resort & Casino.

Following our night of gluttony with dinners at Katsuya and Bazaar Meat, it was time to move on.  So on day 4 of our Las Vegas adventure, we checked out of the SLS Las Vegas and returned our Silvercar.  Then, we headed over to our next hotel, the Aria Las Vegas.

Unlike the SLS Las Vegas, Aria’s parking structure is located in the back of the hotel.  So after you park your car, you must traverse the entire casino floor in order to get to the front desk. 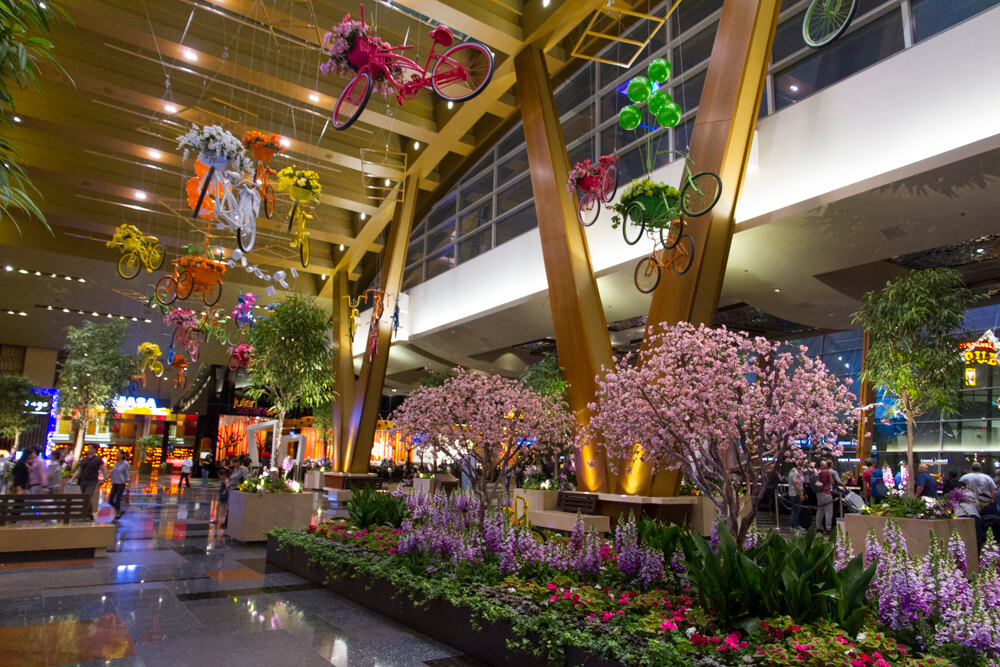 Once in the lobby, you’ll need to queue in one of three lines: general, gold elite and up, or online/mobile check-in.  I opted to do mobile check-in ahead of time, though it’s not what I thought it would be.  The mobile check-in is browser-based and is kind of a pain.  But this is the method you’ll want to use, as the line is often the shortest.  Here, you’ll simply scan a barcode on your phone and a machine will automatically dispense your card keys.

The other lines?  Forget about it.  The elite line isn’t too bad, but the general line looked like you’d spend at least an hour waiting in it.  I’ve never seen such a terrible line, but this is a bit of a mega resort.

After retrieving my room keys, it was time to trudge back through the casino and to the elevator bank located near Jean-Philippe. Our room was located on the 25 floor, requiring us to use the upper-level elevators. 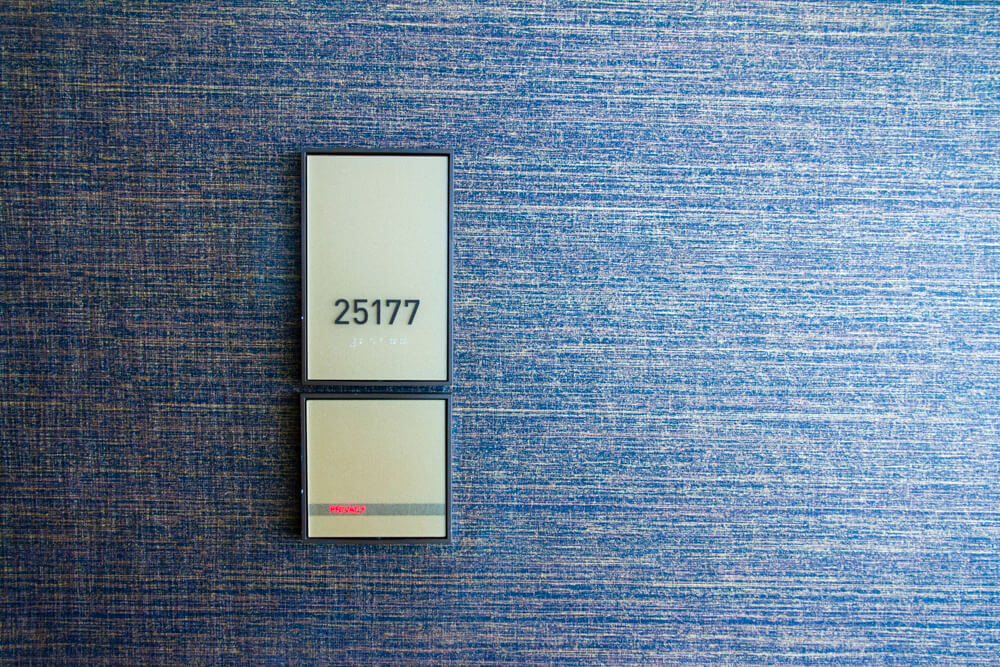 The rooms themselves are rather large at Aria.  However, the rooms are decorated in primarily darker colors, so it doesn’t feel as airy and open as it could. 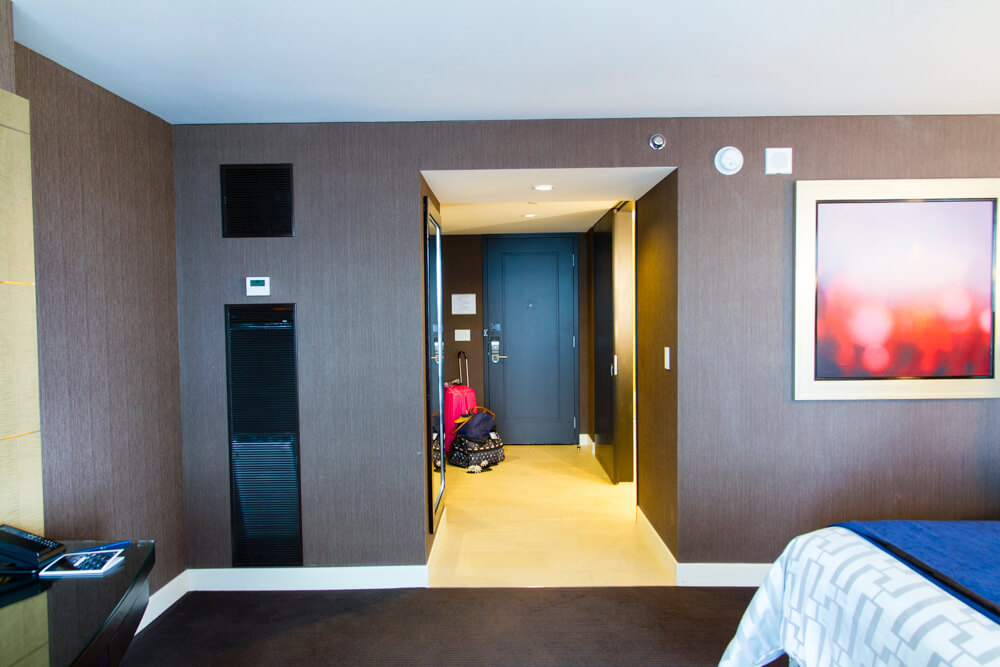 Upon entry into the room, the bathroom is located immediately to the left.  Unlike at the SLS, the bathroom here was rather large.  In it, we had a dual vanity with a separate shower and tub.  The toilet is partitioned off from the rest of the bathroom with a frosted glass wall and door. 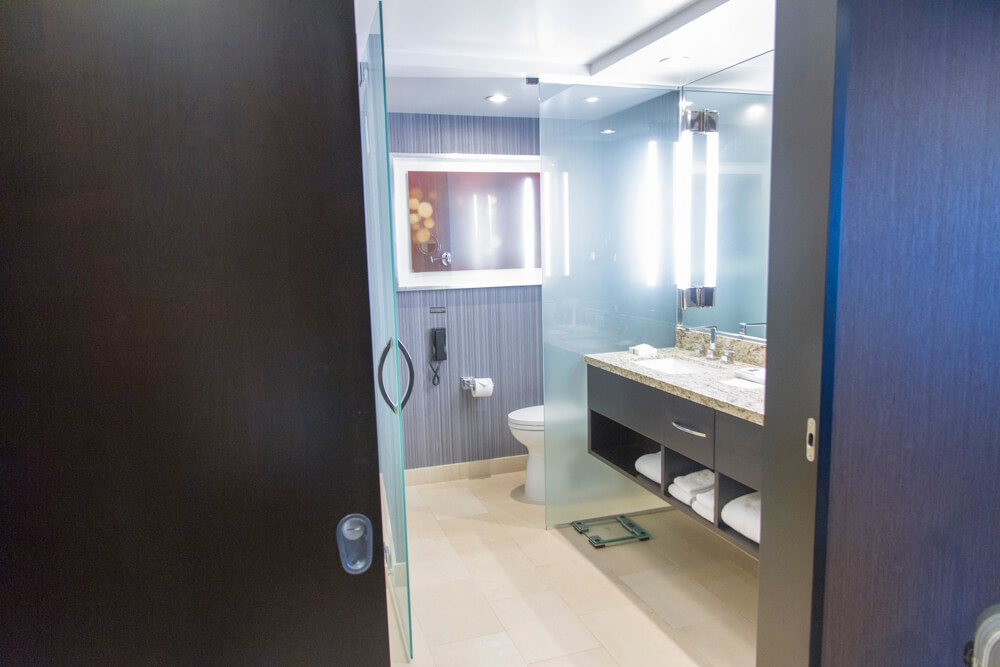 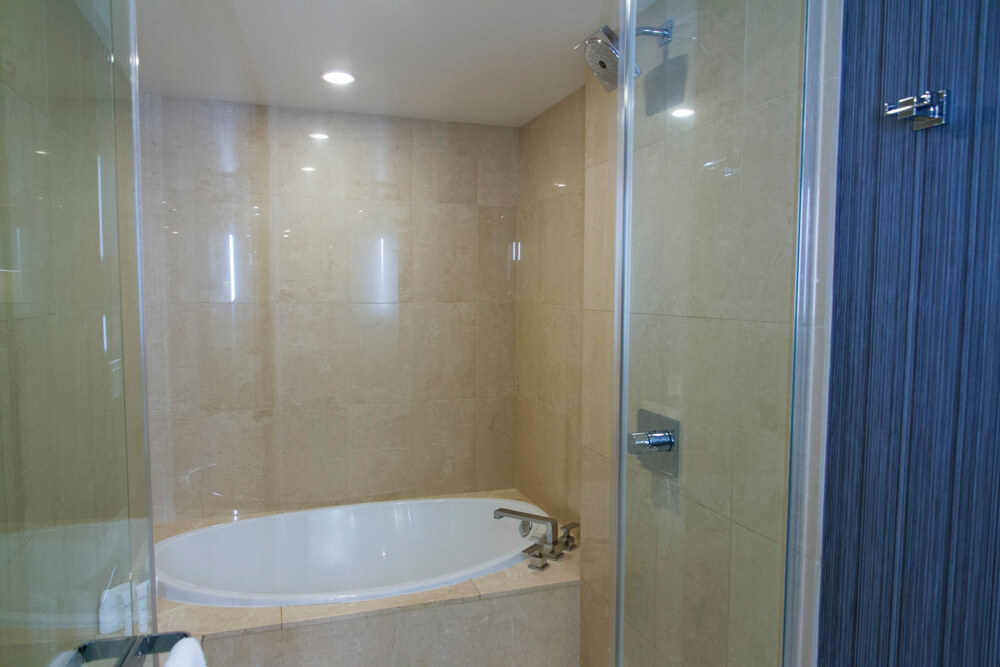 The toiletries on offer at Aria are all liquid and are branded KiNu.  It’s nothing special, and actually seems to be a generic hospitality brand used by a number of different hotels around the world. 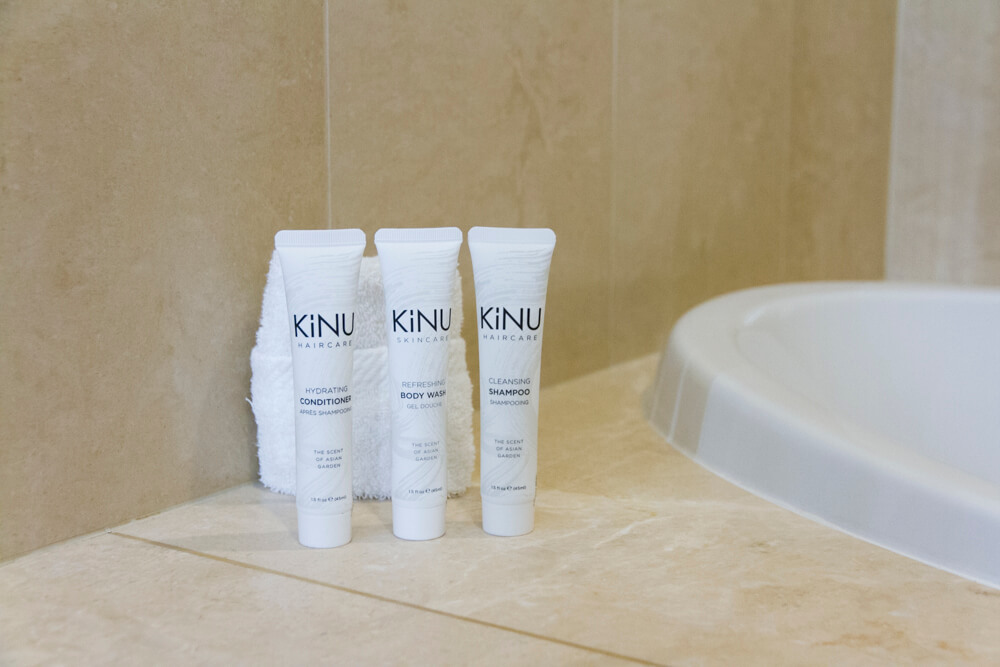 Immediately across from the bathroom are a set of closets and a dresser.  The closet on the left contains a set of robes, the ironing board, and an iron. 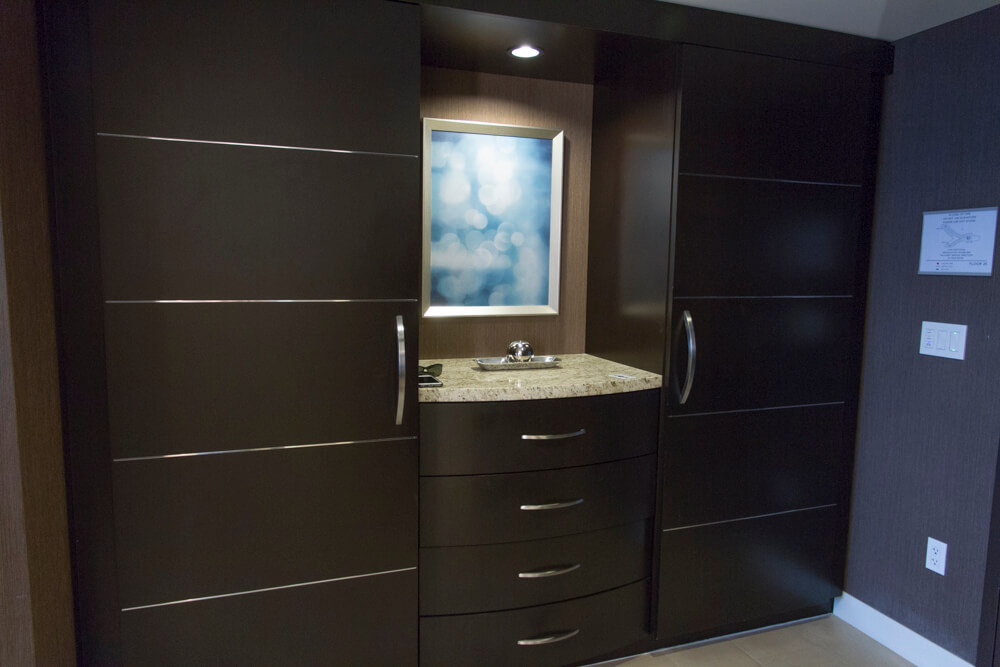 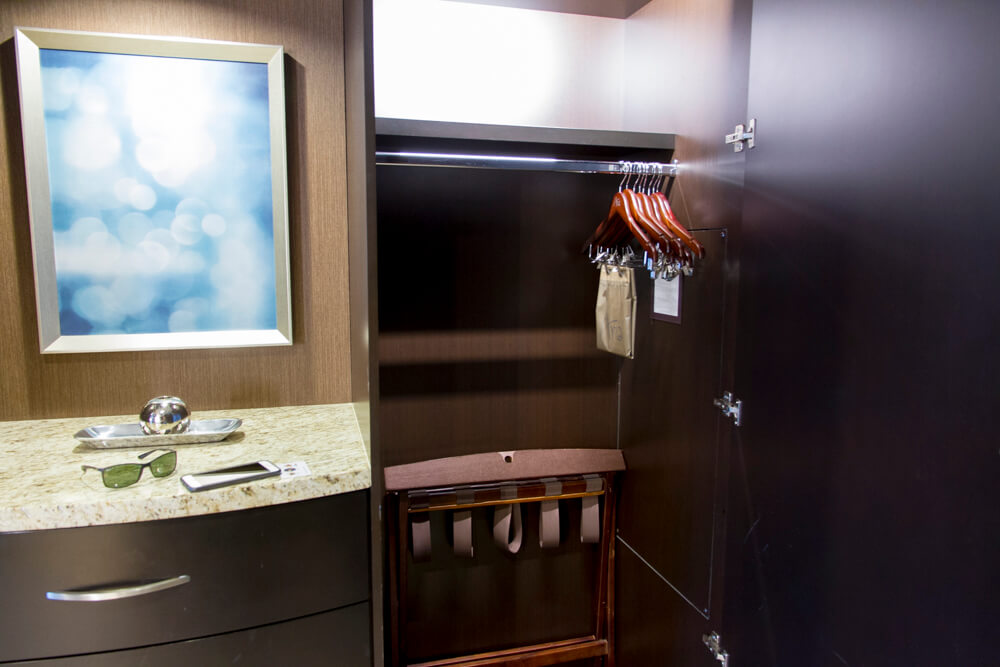 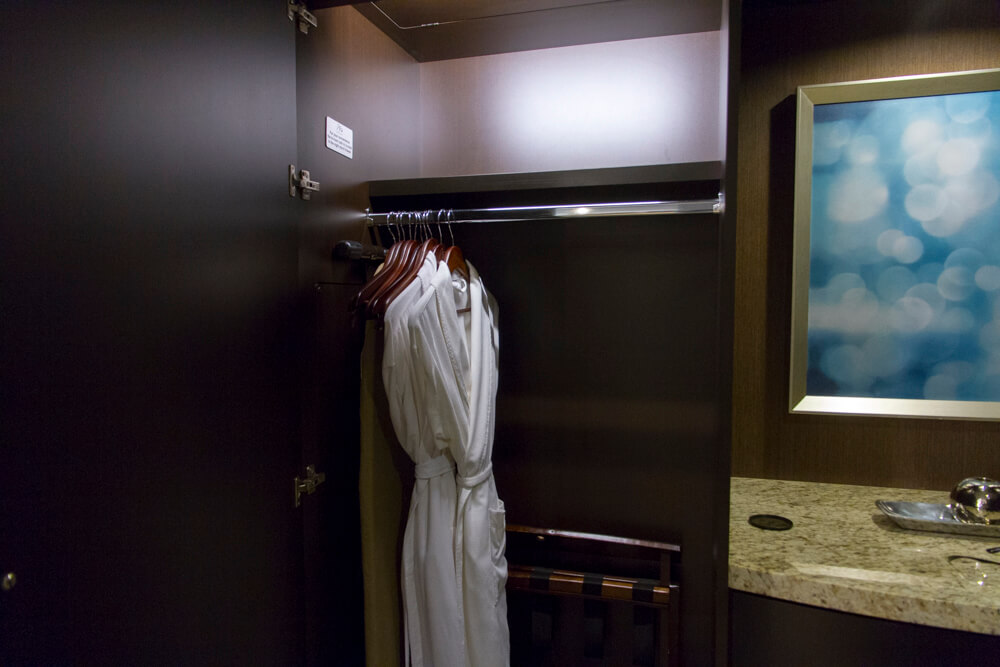 From there (looking into the room), our king bed was on the left, as well as a set of chairs near the window. 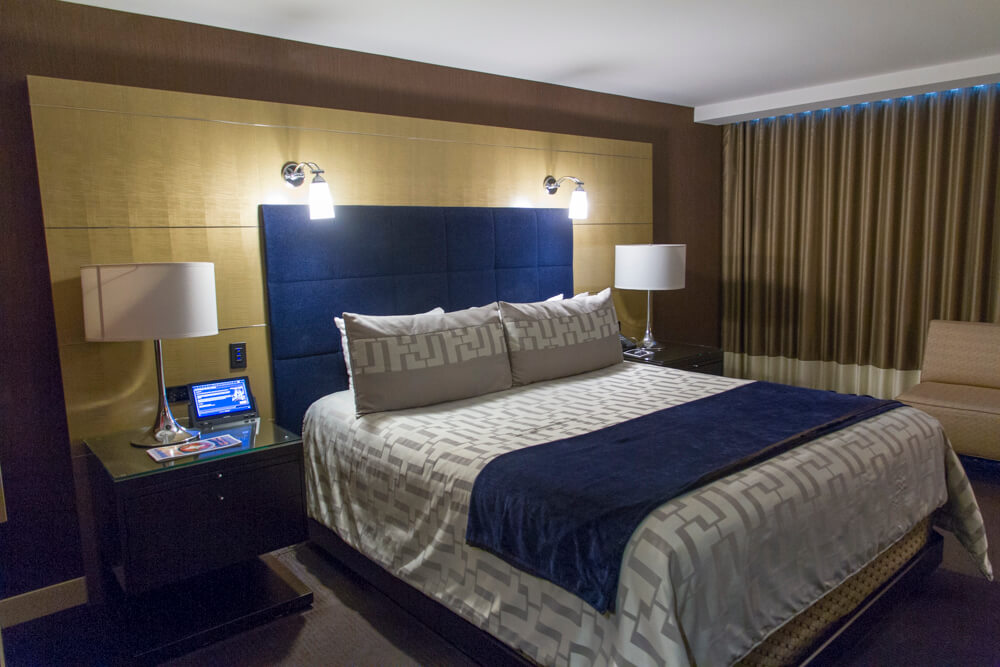 And directly to across from the bed was the TV, desk, and minibar. 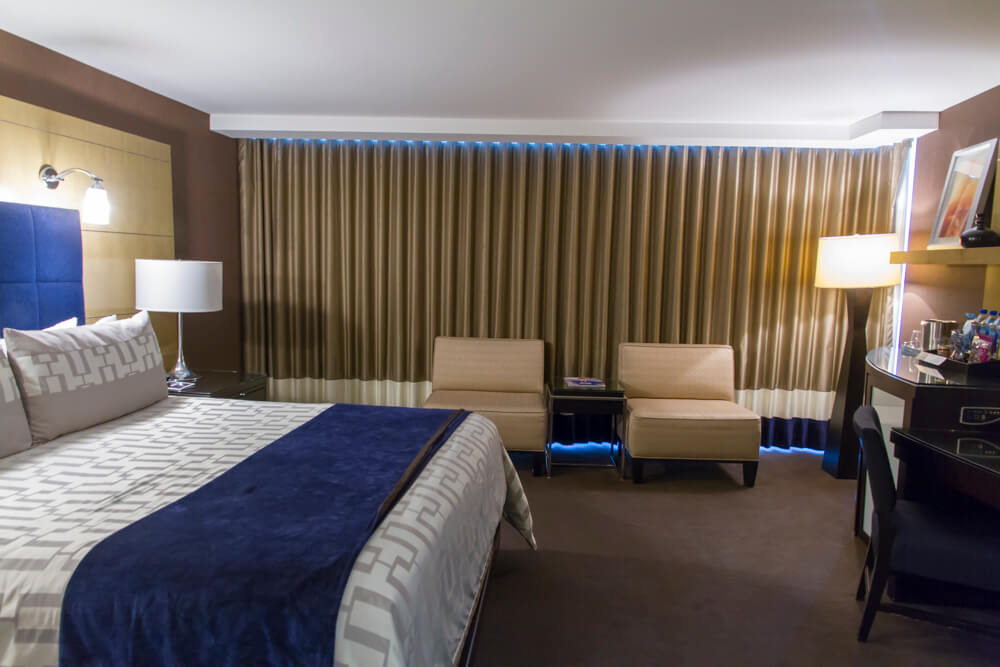 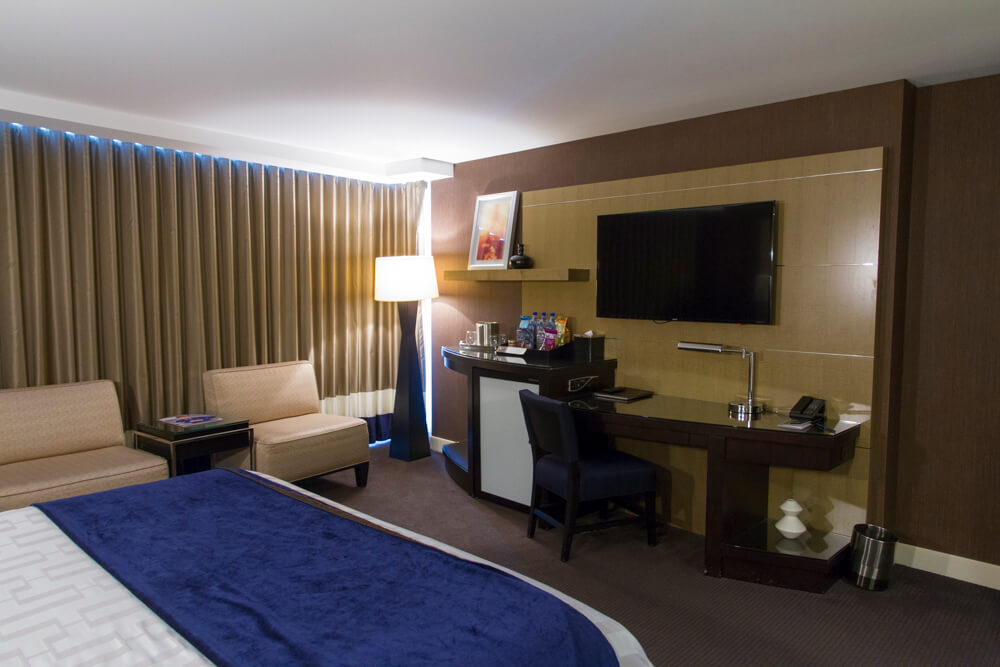 Like the SLS, Aria has a minibar but no fridge for guest use.  Well, you could use it for personal items, but there’s a $35/night fee for that! 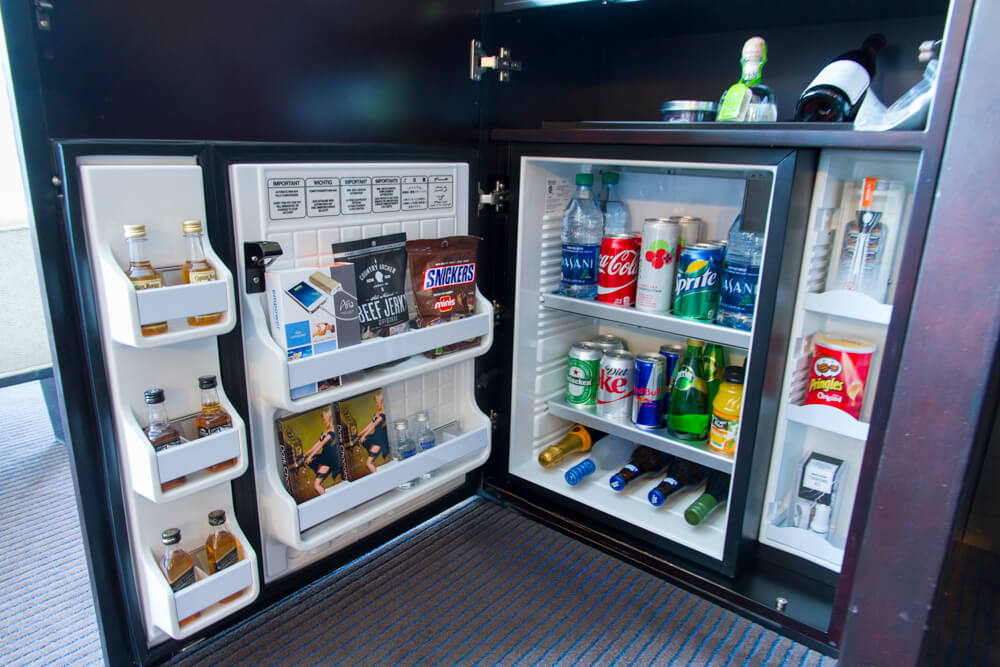 Above the minibar were the ice bucket, cups, bottles of water, and snacks.  The Fiji water here are, unsurprisingly expensive.  You could buy the same water in the sundries downstairs for a third the price. 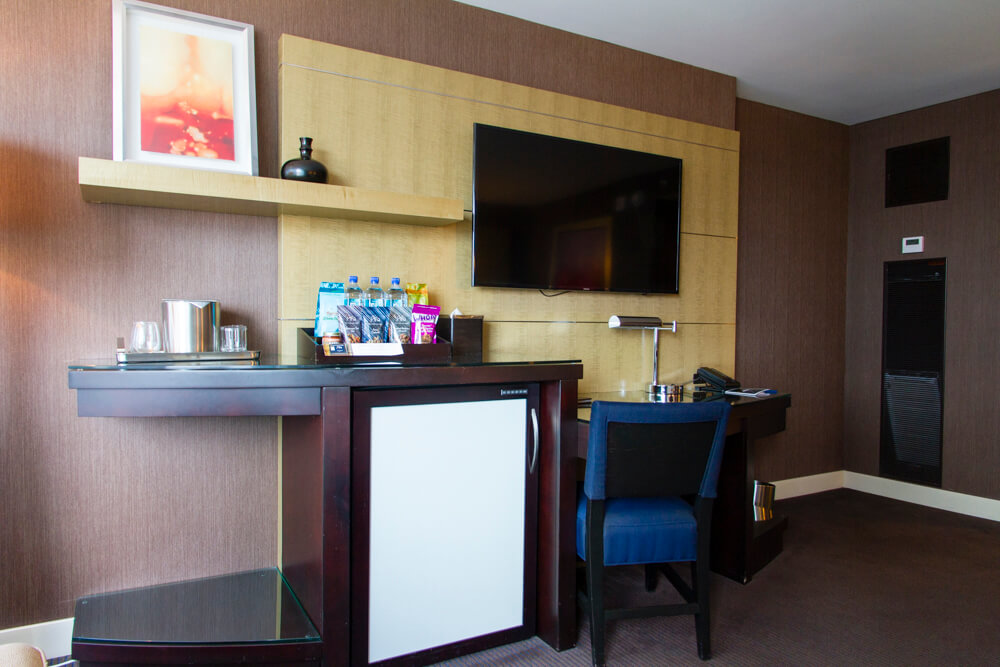 Much like many of the larger chain hotels, the Aria does also have a media connection panel in their rooms. 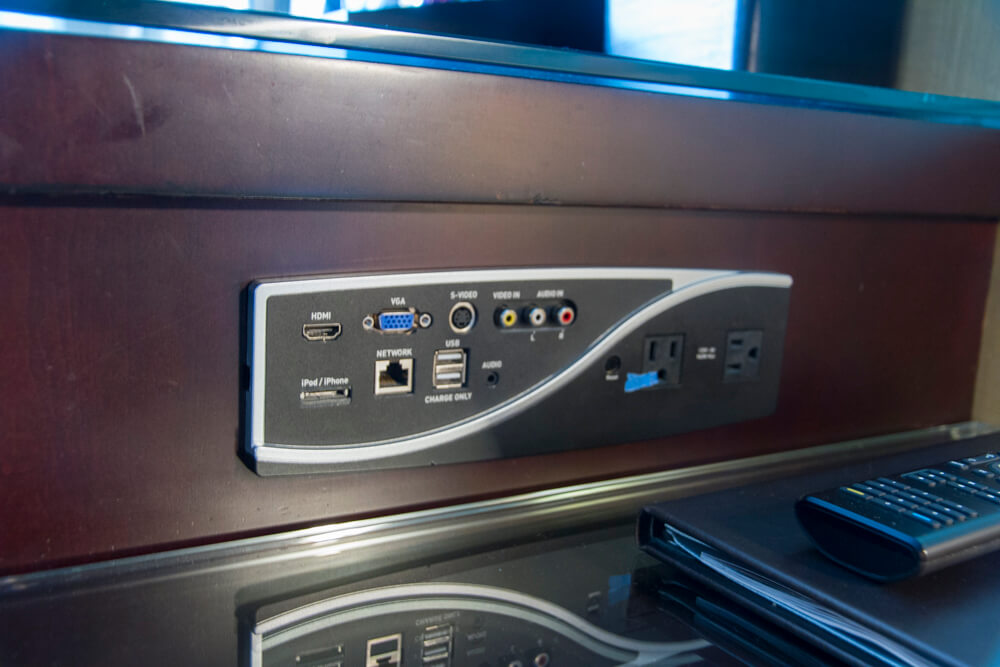 Room controls at Aria are largely automated.  Drapes are all automatic, and lights gradual turn on and off.  The privacy indicator is even electronic, so no door tag needed.  To control all of these things, one can use the wall switches, or a tablet located next to the bed. 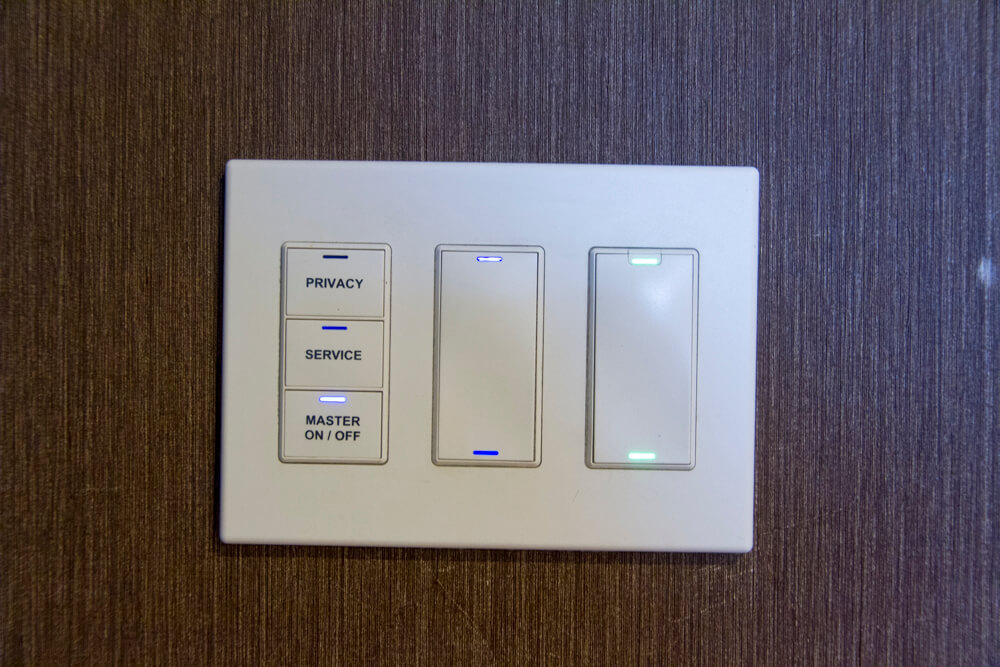 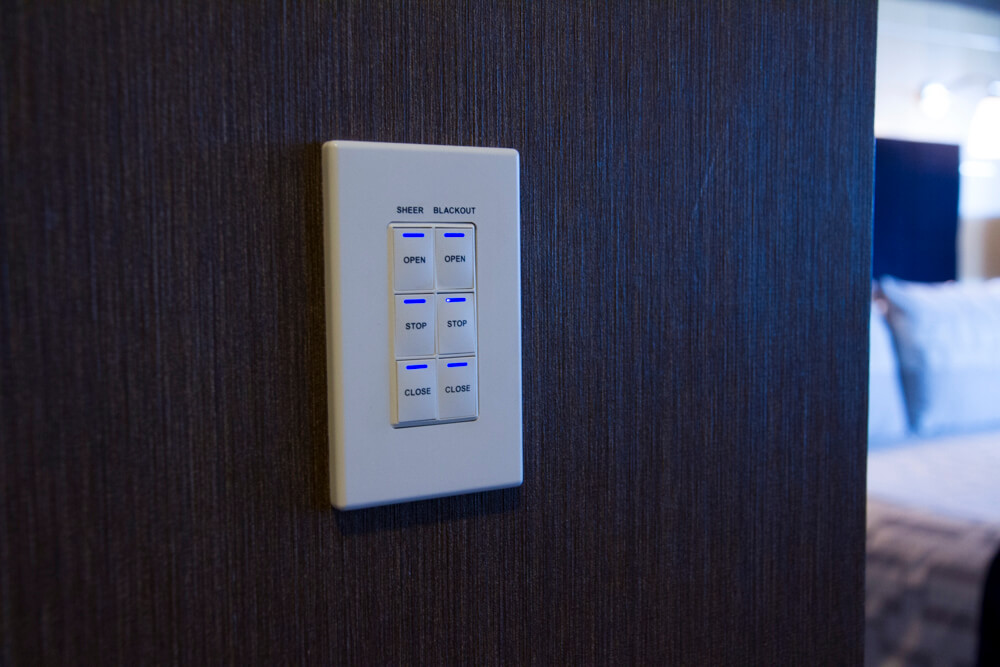 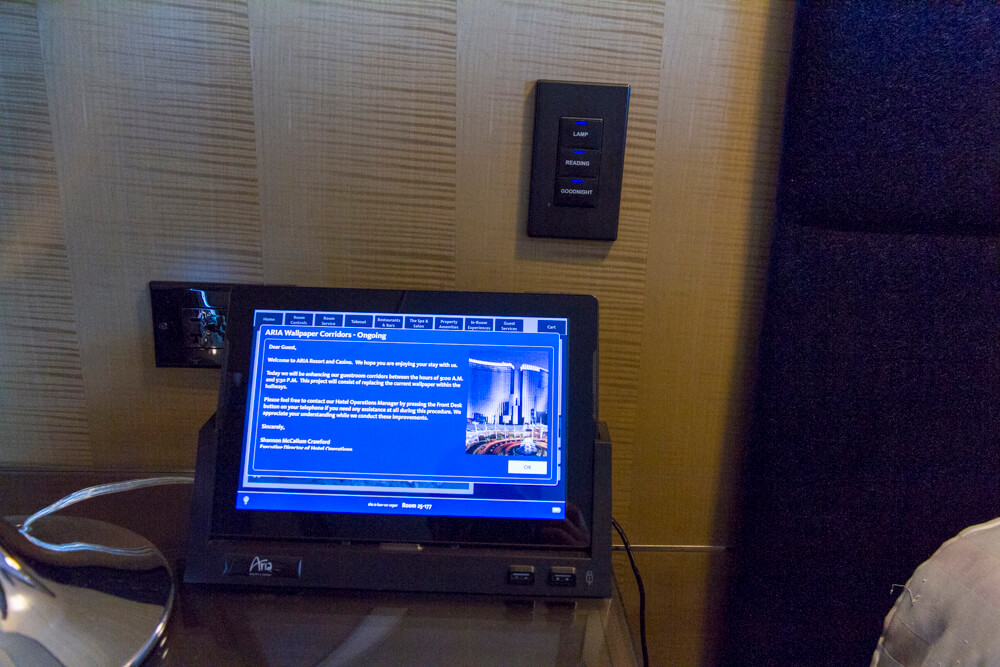 And in case you’re wondering, there is a safe in this room, and it is large enough to fit a 15″ laptop in.  It does not, however, have much room for bulkier items like camera gear. 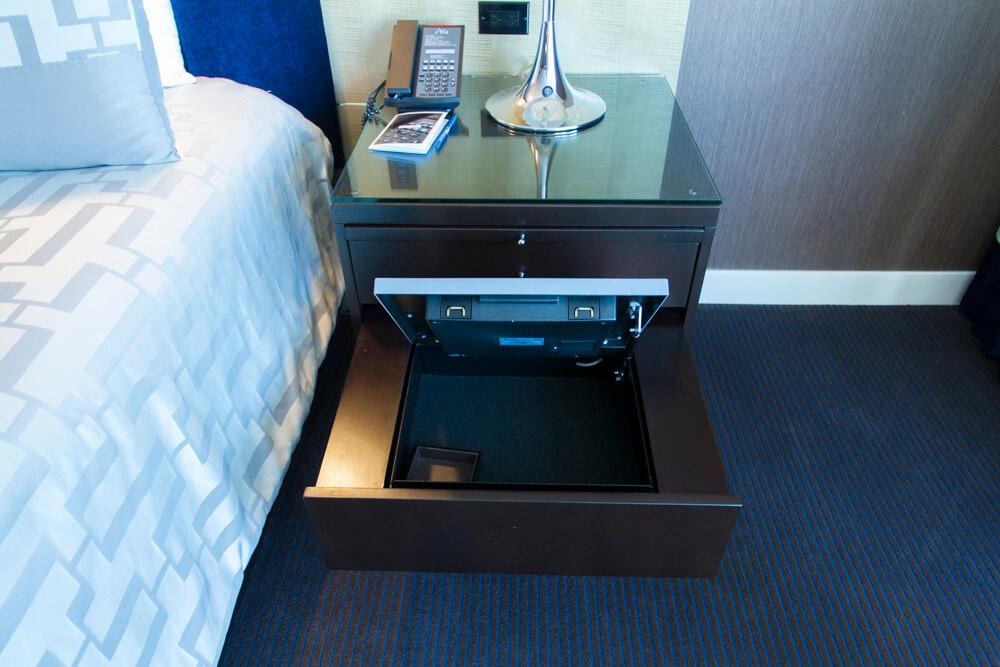 Free wifi is available throughout the resort, however, it was woefully slow in our room.  This made it somewhat difficult to stay connected, especially since I don’t have an unlimited data plan.  There are hardwire connections available, but I didn’t have an ethernet cable on me to test it out.

Our room was actually on the strip-end of the resort.  However, our view wasn’t of the strip.  Instead, our view ended up being of the hotel I had wanted to stay at, but was too expensive: The Cosmopolitan. 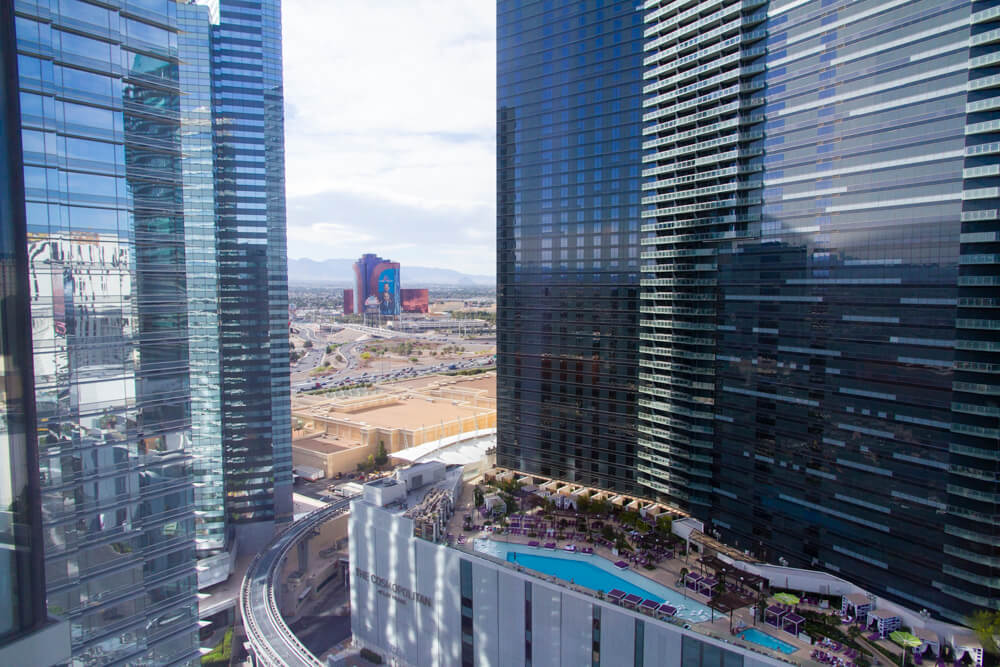 Overall, service at Aria was much better than that which we received at the SLS Las Vegas.  The staff were usually genuinely friendly and much more personable.  The only hiccup we had was in dealing with the resort credit.  At the time of booking, the resort credit was marketed as a resort-wide credit.  However, upon check out, the resort credit was not applied to our remaining balance.  I called MGM to clarify and they said that the credit was for dining only.  This was irritating to me, as it was a bate-and-switch in my opinion.

The unique thing about staying at MGM properties is that many of them are linked together via a monorail system.  Rides are free, and while not quick, is often better than walking in the scorching Las Vegas sun.  And Aria has its own station, which links it to the Bellagio and the Monte Carlo. 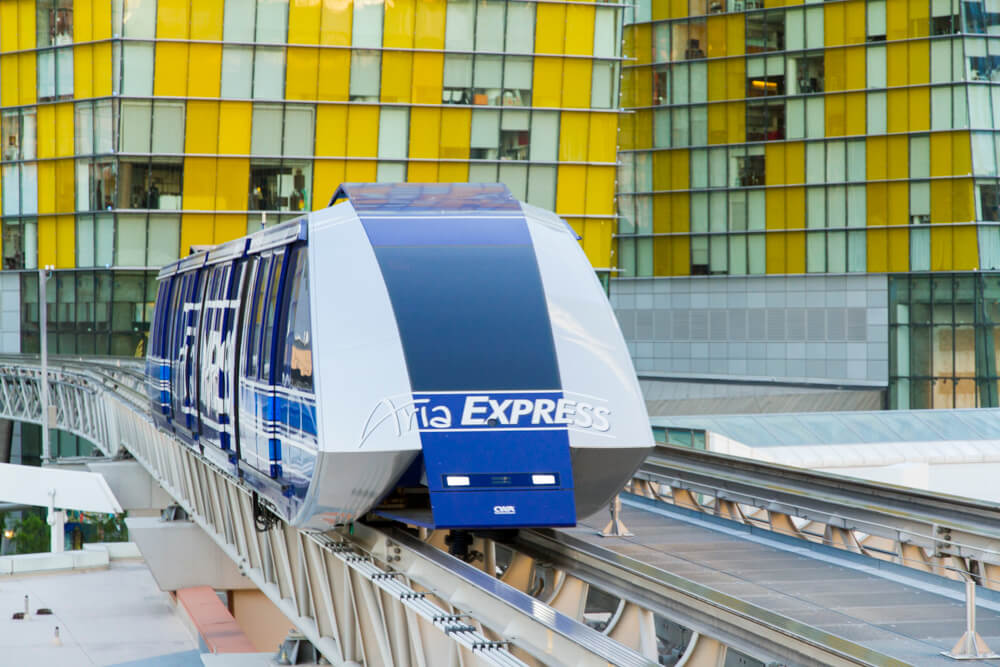 The Aria Las Vegas is a nice hotel.  Rooms here are nicely appointed and offer a good amount of space.  However, the decor makes the rooms feel older.  Or perhaps the target market for the resort simply skews older than some of the others.  And while there were some aspects I wasn’t a fan of (crowding, resort credit issue, overcrowded parking, etc) I found our experience at the Aria Las Vegas to be far superior to the one we had at the SLS Las Vegas.  But I wouldn’t want to call Aria my favorite hotel yet, there are others I’d like to try still like The Cosmopolitan, Linq, Delano, etc.

At the end of the day, though, the Aria Las Vegas represents a good value.  It is someplace I’d stay at again, especially if the price is right.