Following our wonderful stay at the Hilton Hawaiian Village, the wife and I needed to stay in a hotel another night.  This wasn’t by choice and was last minute.  Not wanting to waste points, I looked for the cheapest rate I could find.  And rather than simply staying at the HHV another night, I decided to revisit the Courtyard Waikiki Beach.

It’s been a while since the wife and I stayed at the Courtyard Waikiki.  In the past, the property used to offer suite upgrades for just an additional $20/night.  Parking was $30/night at that time (valet only).  So value used to be really good, and it still can be.  But the property has also received a renovation since our last stay.  Before the rooms looked like this:

While the rooms didn’t look terrible, they did look dated.  The worst part of the rooms used to be the awful window mounted air conditioners.  They were so loud, they’d drown out the street noise!  Today?  The rooms look much better.  But are they?  Unfortunately, on this past stay the paid rate for the suites were really high.  And despite my status being recognized at check-in, I was not offered an upgrade.  This means our stay at the Courtyard Waikiki would be my first in a standard room. 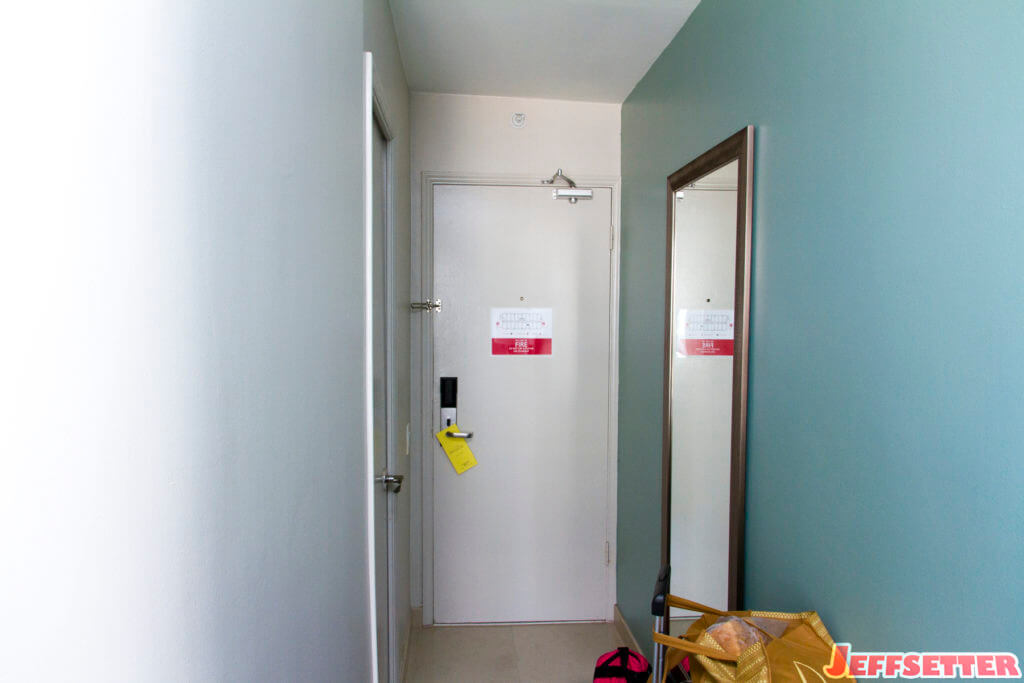 The standard rooms are VERY tiny.  The door opens into a narrow, short foyer with the bathroom immediately next to the room door. 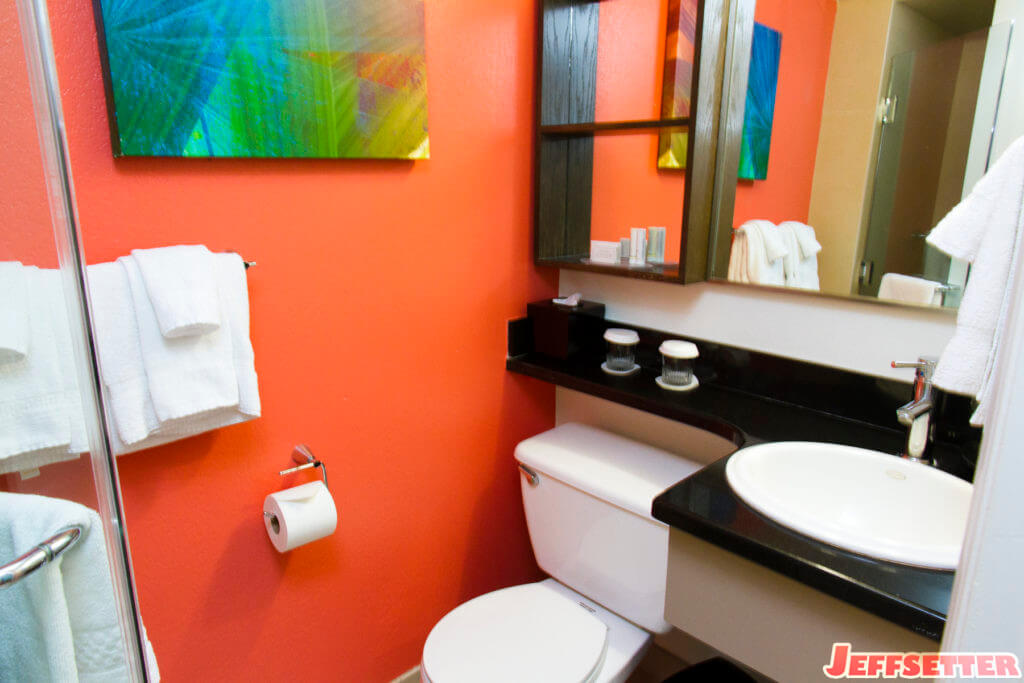 The bathroom itself was really tiny, like the rest of the room.  Space, however, was very efficiently use.  Still, two people can barely stand in the bathroom together.  The shower is very tight and dark too, meaning I couldn’t get a photo of it.  Fortunately, water pressure is good, though the shower head is a bit low for my liking.  I’m not a fan of the pink wall either, and most of the fixtures, as well as the vanity, are holdovers from before the renovation. 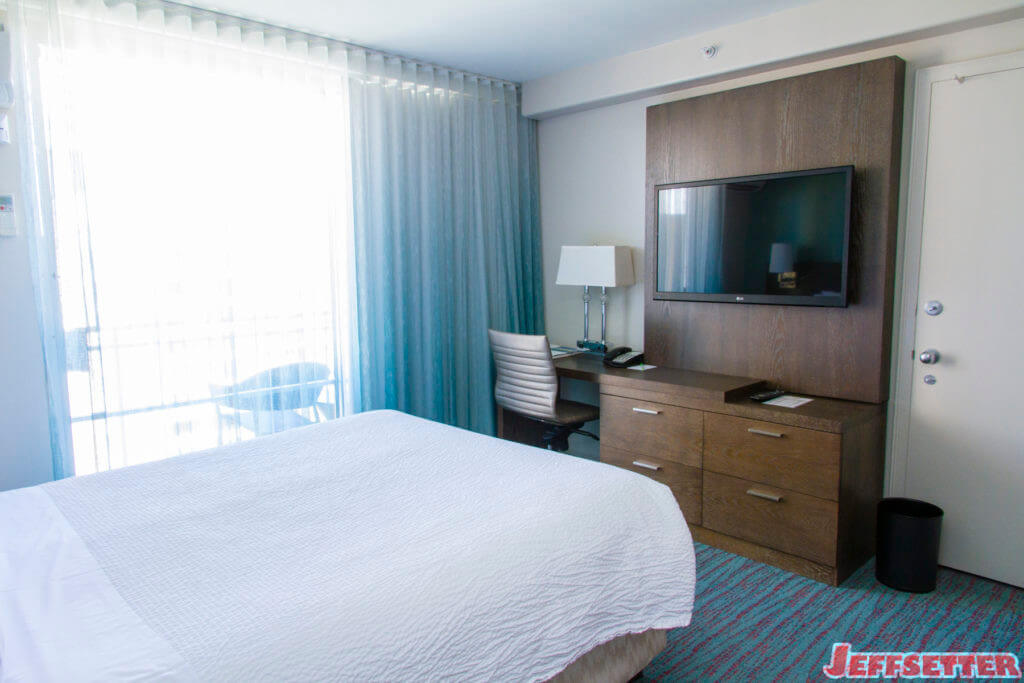 The rest of the room has a nice, airy, modern feel to it.  The color palette and decor almost makes the room feel less claustrophobic than it actually is.  Almost. 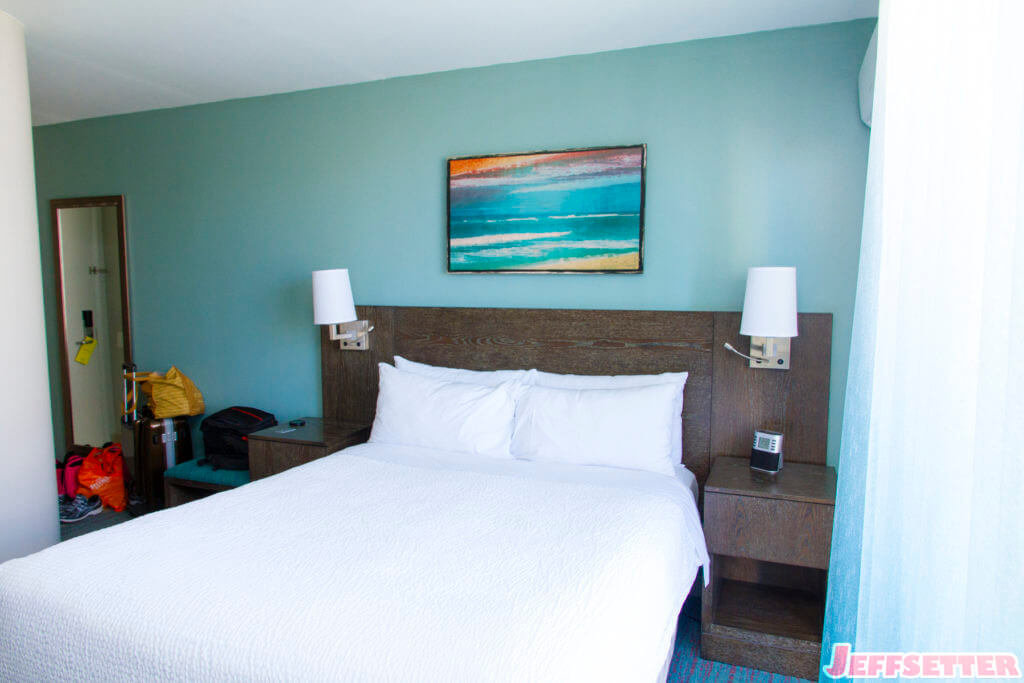 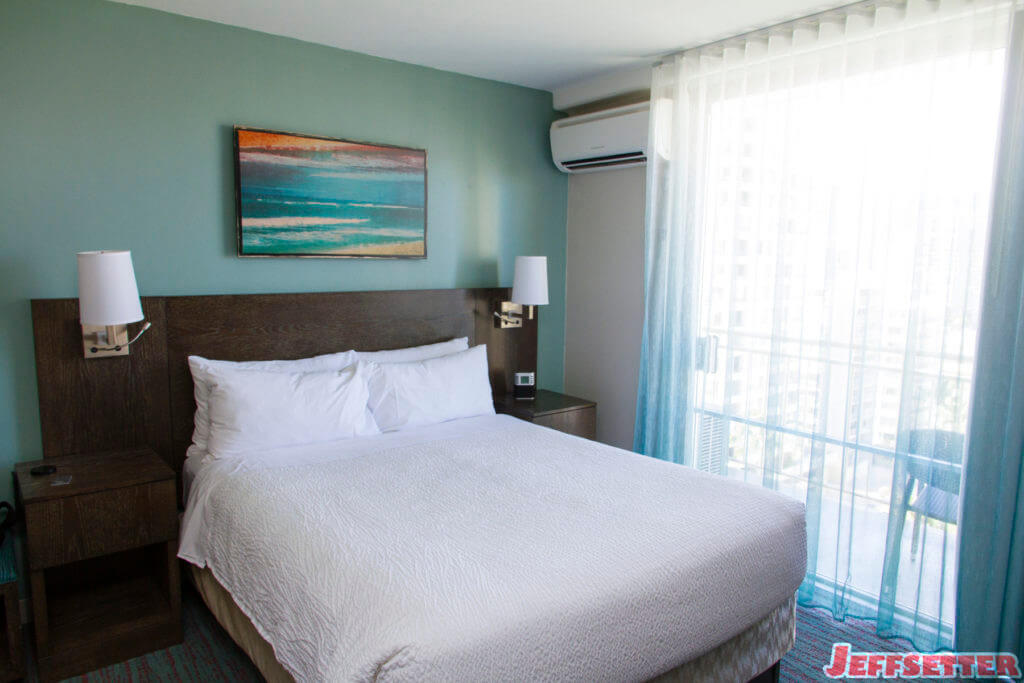 Besides the new decor, the other biggie from the renovation are the new air conditioning units.  Instead of noisy window mount units, the Courtyard Waikiki now uses quiet split a/c units.  Of course this comes at the cost of some balcony space, but as you’ll see later, that isn’t really a loss.  Unfortunately, the position the a/c was mounted also meant that the cold air flow always goes directly onto the bed.  This meant that as the compressor cycled on and off throughout the night, I would go from freezing cold to sweating hot.  There was no happy medium.  Didn’t have that problem with the window mount units, that’s if they worked at all. 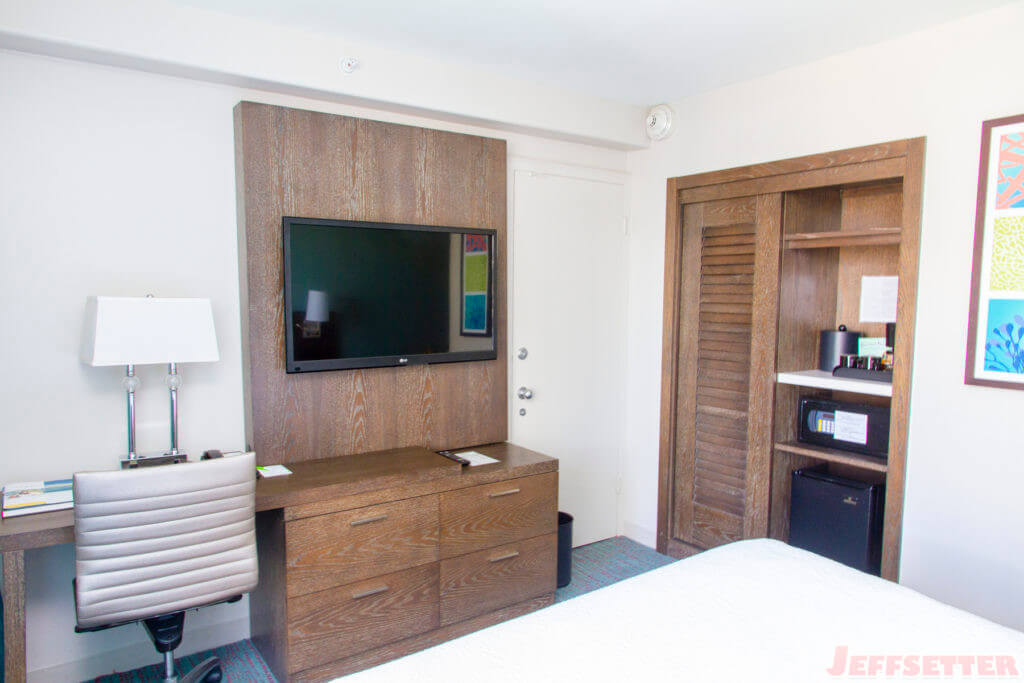 What I did like about the room, though, was the efficient use of space once again.  What little space is available is maximized very well.  For instance, the built-in dresser under the TV that also formed part of the desk.  The fridge, safe and coffee maker all occupied a tidy little alcove that becomes covered when you open the closet. 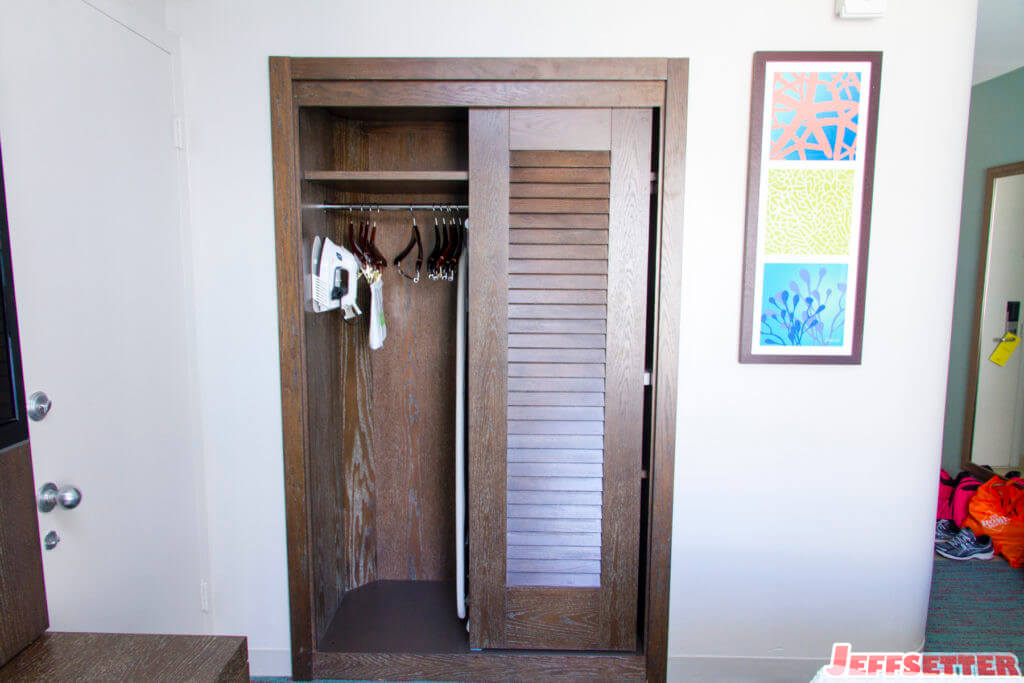 The closet, while tiny, did have an iron and ironing board.

Now about that balcony.  Unfortunately none of the rooms at the Courtyard Waikiki Beach, despite the name, have an ocean view.  If you’re lucky you’ll get a view with a tiny sliver of water.  Unfortunately those rooms also face busy Kuhio Ave. making them more noisy than other rooms.  On this stay, our room had a mauka (toward the mountains) view. 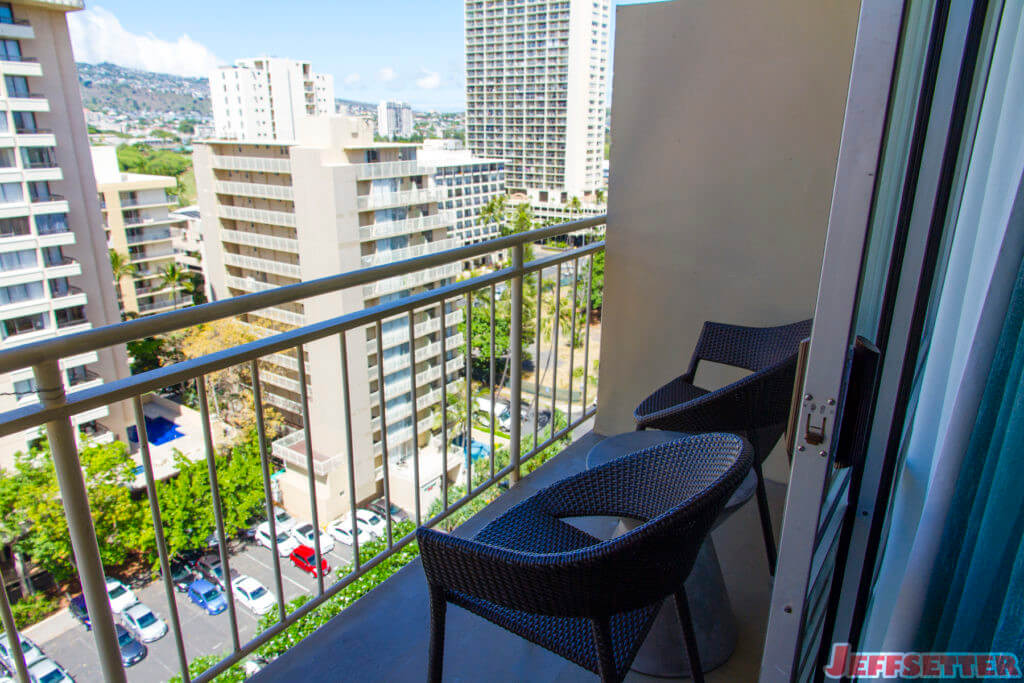 Ok, so what that really means is we had a view of the tower behind the hotel, the valet parking lot, and the pool. 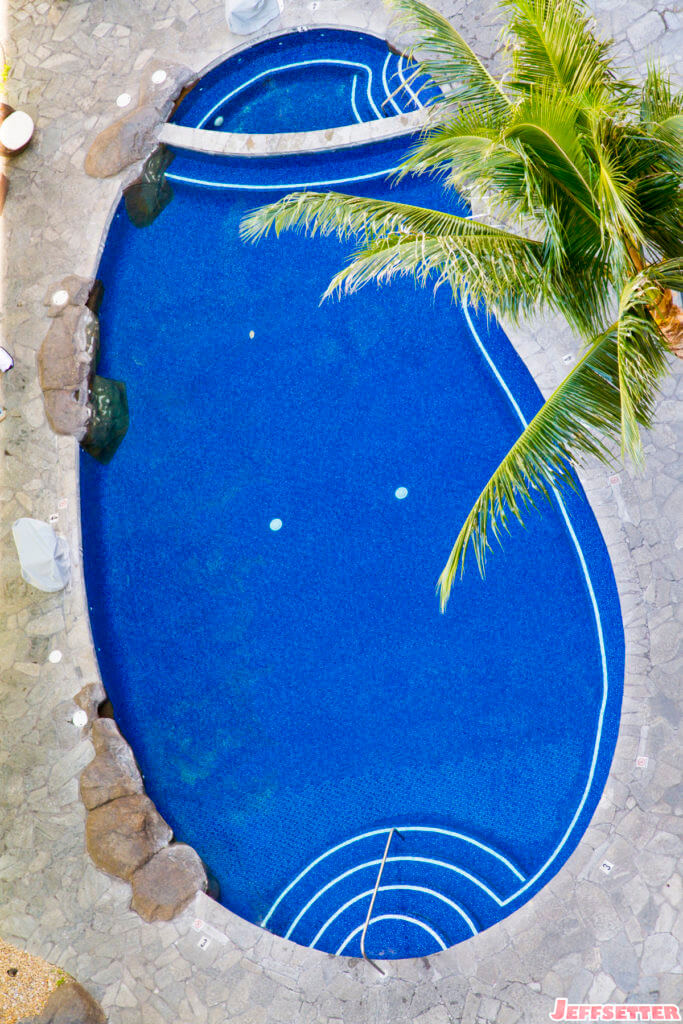 Not a total loss I suppose… We did have a water view after all.  ?

It was nice to see the evolution of the Courtyard Waikiki.  The new interior design makes a world of difference compared to the old one.  Unfortunately, I think more could have been done to make the property better.  The bathrooms definitely could have used more work, and the a/c mounting position is unfortunate.  But some improvements are better than none.  They aren’t enough, however, to keep me coming back.  At over $200/night plus $42/night valet-only parking, the value proposition of the property isn’t what it used to be.  That and I hate the tiny, standard rooms.  Plus with other properties making vast improvements and newer ones coming online, it’ll be even harder to compete.