Inexpensive and sushi don’t usually go hand-in-hand, but sometimes it just works.  And if you’re in Hawaii and want good sushi on a budget, check out Katsumidori Sushi.

If you love sushi, you know sushi is usually fairly pricey.  And, if sushi is inexpensive, it often isn’t all that good.  But it doesn’t always have to be this way, even in Honolulu, where everything is expensive.  What’s even more amazing, though, is one of Oahu’s most affordable, quality sushi restaurants, Katsumidori, is in Waikiki.  Sort of.

Katsumidori is one of Honolulu’s newer sushi spots and calls the Prince Waikiki home.  Specifically, the restaurant is in a corridor just off the lobby.  It can be somewhat tricky to locate, but once you find it, it’ll be super obvious. 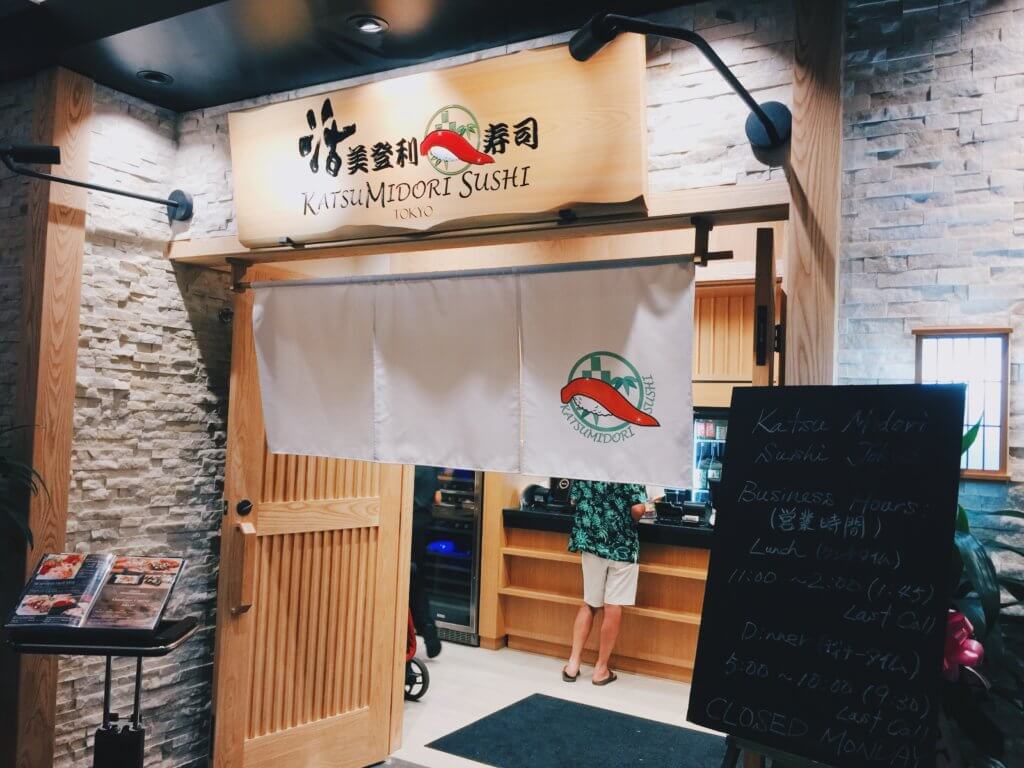 Being an inexpensive sushi restaurant with good quality means the place is almost always busy.  So if you plan on coming here, reservations are essential, and if you’re given a choice regarding where to sit, be sure to ask for a booth.  The sushi bar is fun and all, but the booths have iPads on which you can order.  And even better yet, there’s a little, automated delivery system at the booth that will serve you some of your orders. 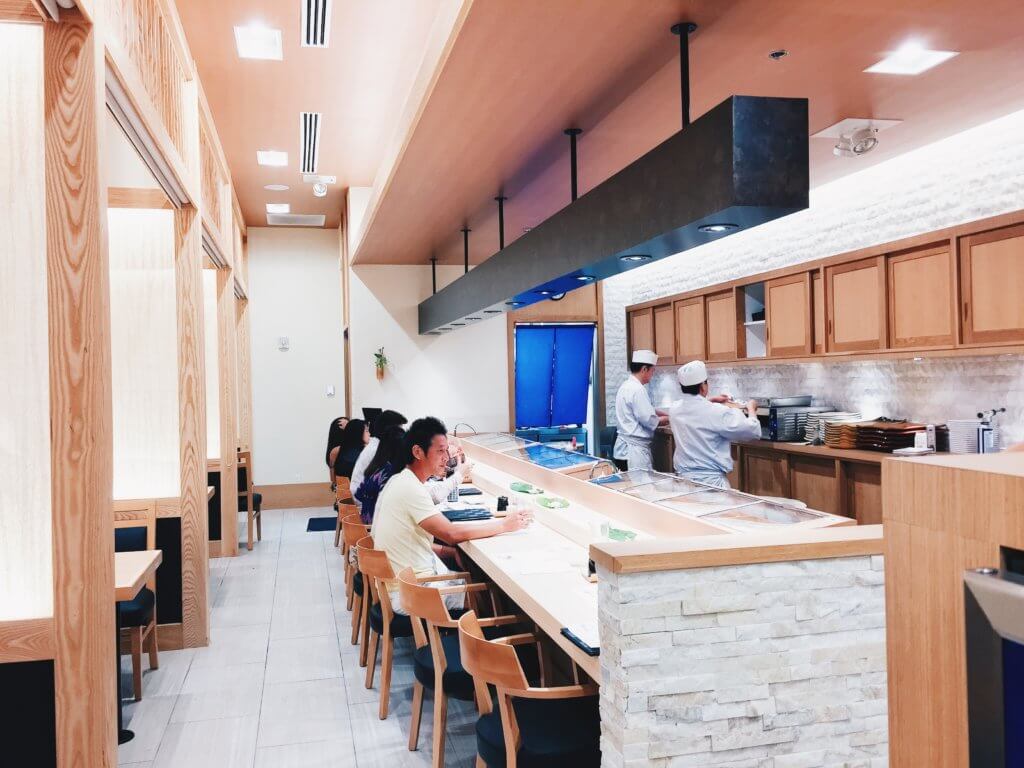 Service is generally good, and orders often arrive quickly.  If I had one complaint, though, it’s that it can take a while to get refills.  But, that’s just how it goes sometimes, especially given how busy they are.

The main draw at Katsumidori Sushi is, well, the sushi.  And for a good reason too.  As of this writing, menu items are priced as low as $1.00 per piece.  But most things are priced between $2.00 and $3.00.  The most expensive piece of sushi?  The $8.00 Golden Sushi, which is seared extra fatty tuna, minced tuna, ikura, uni, and gold leaf.  Me?  I usually order a set like the Sekiwake, and add some additional pieces. 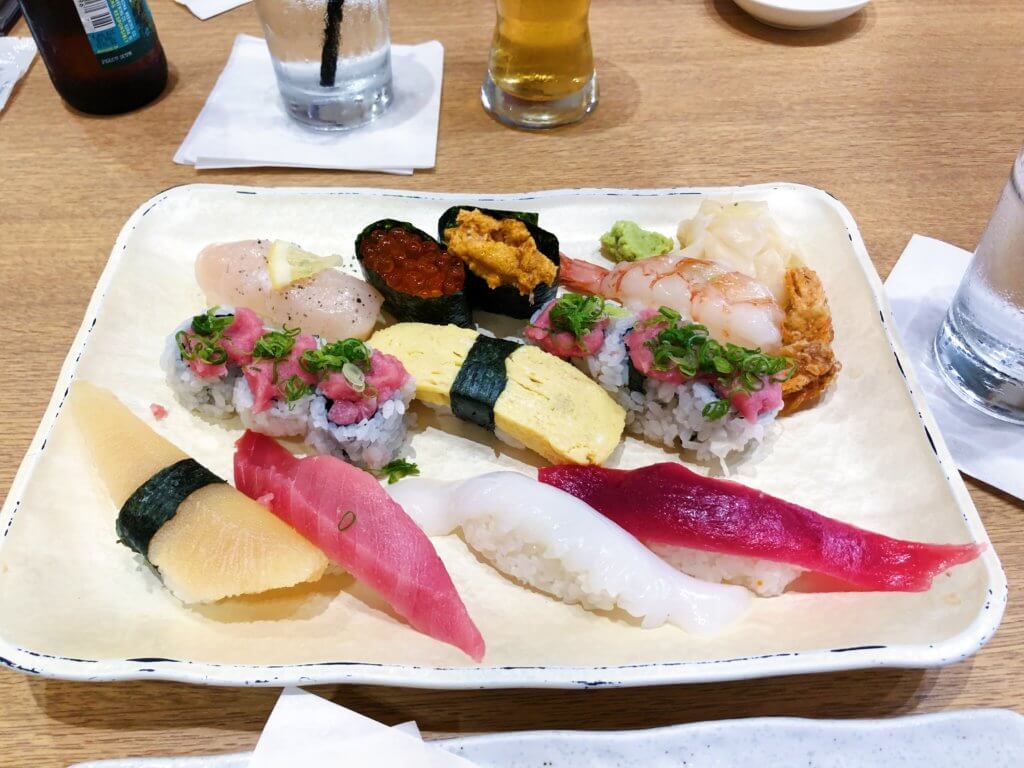 Unfortunately, quality isn’t always so great.  Take a look at the above set; the uni looks a bit off, and it definitely tasted that way.  But one of the first time we went, the uni was fresh, clean and fantastic. 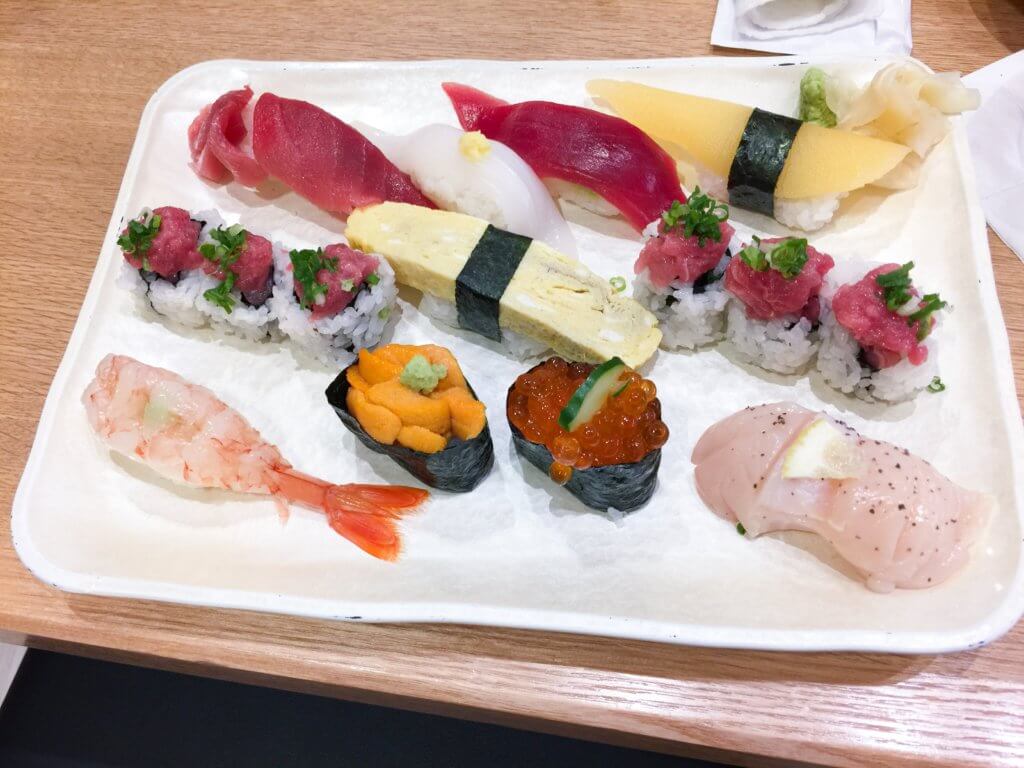 Something else I’d skip on is the Sea Eel of any type.  Yeah, this place isn’t near the caliber of, say, Sushi Nakazawa, but Katsumidori’s version tastes pre-made. 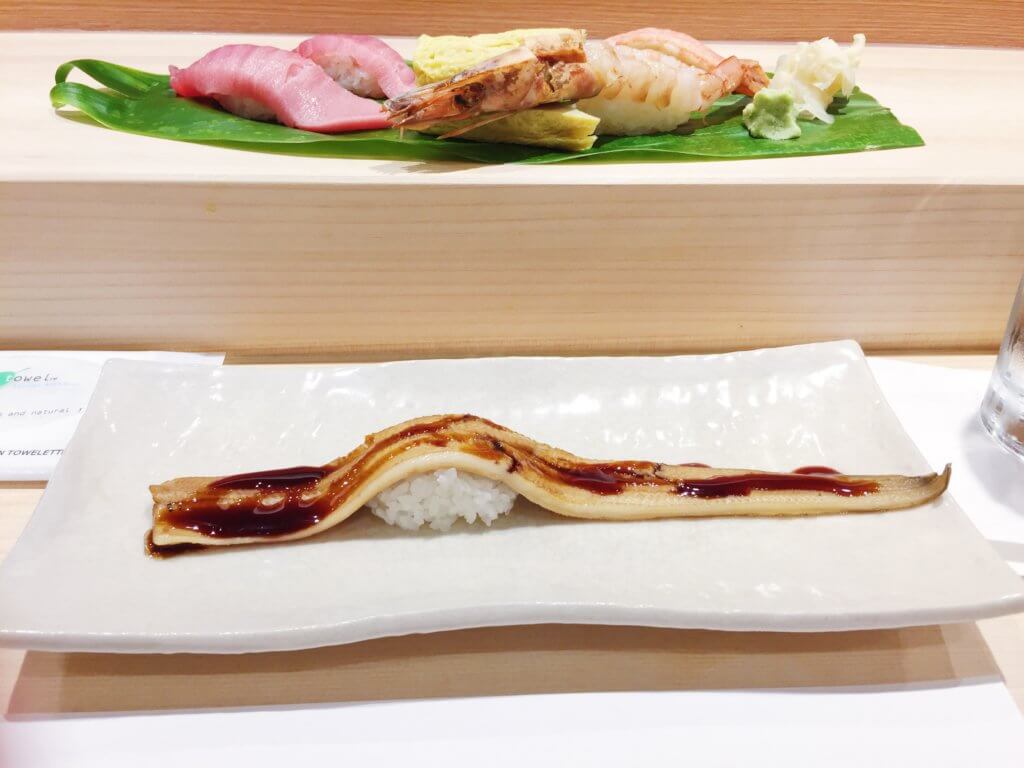 Mrs. Island Miler will usually order a special roll too, like this Seafood Carnival Roll. 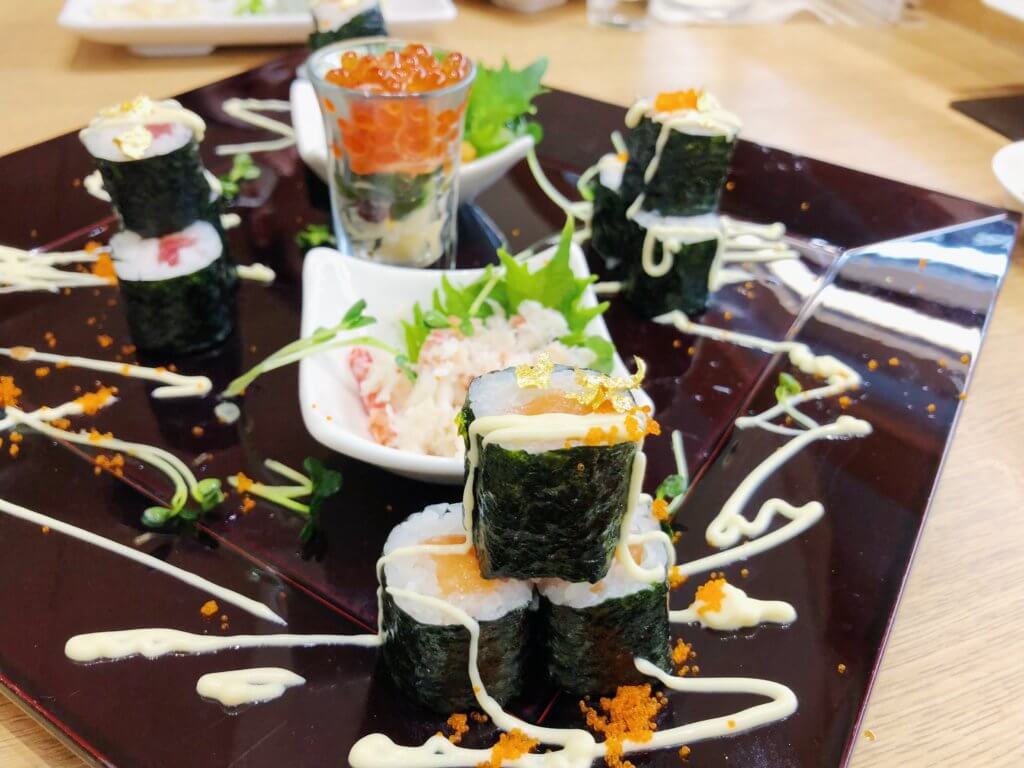 What’s in it?  Honestly, no idea.  All the menu says is a salmon roll, tuna roll, sea urchin, salmon roe, and crab.

Just because Katsumidori Sushi is a sushi place, that doesn’t mean they don’t have cooked items.  And I have two favorites here that I’ve only seen here.  The first is the Deep Fried Wrapped Shrimp Cake and Shiso Leaf. 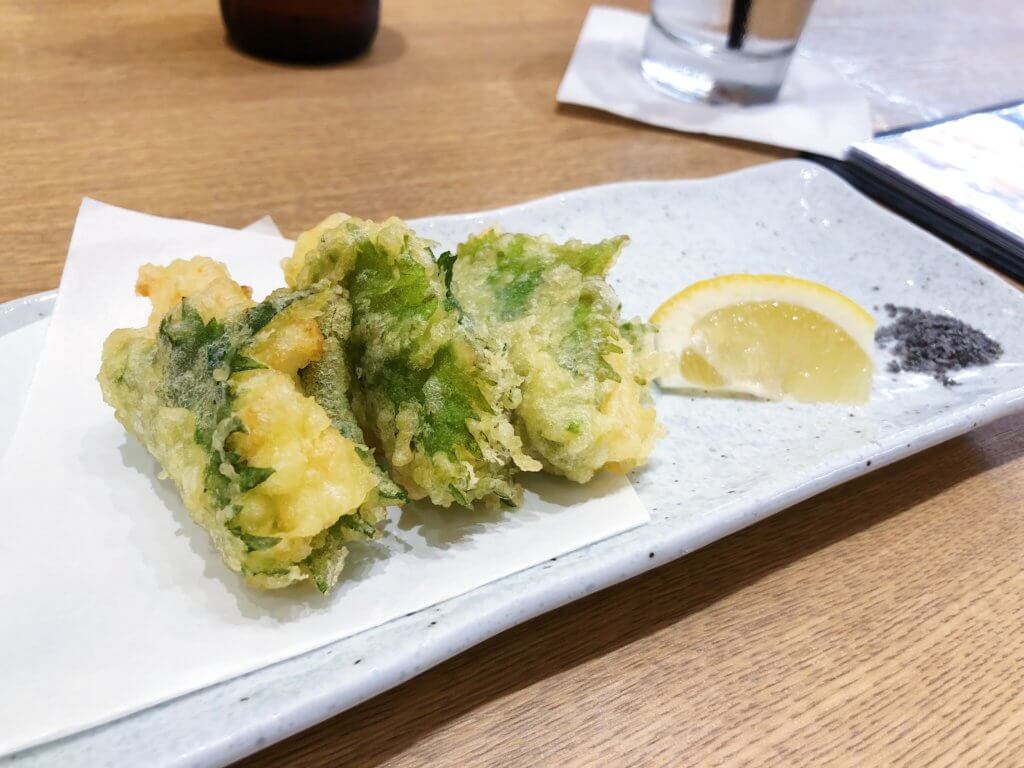 Sounds weird, but tastes great.  Sprinkling it with the salt is a must, though I can pass on the lemon.  And don’t be scared by the “shrimp cake” description, it’s more like diced shrimp. 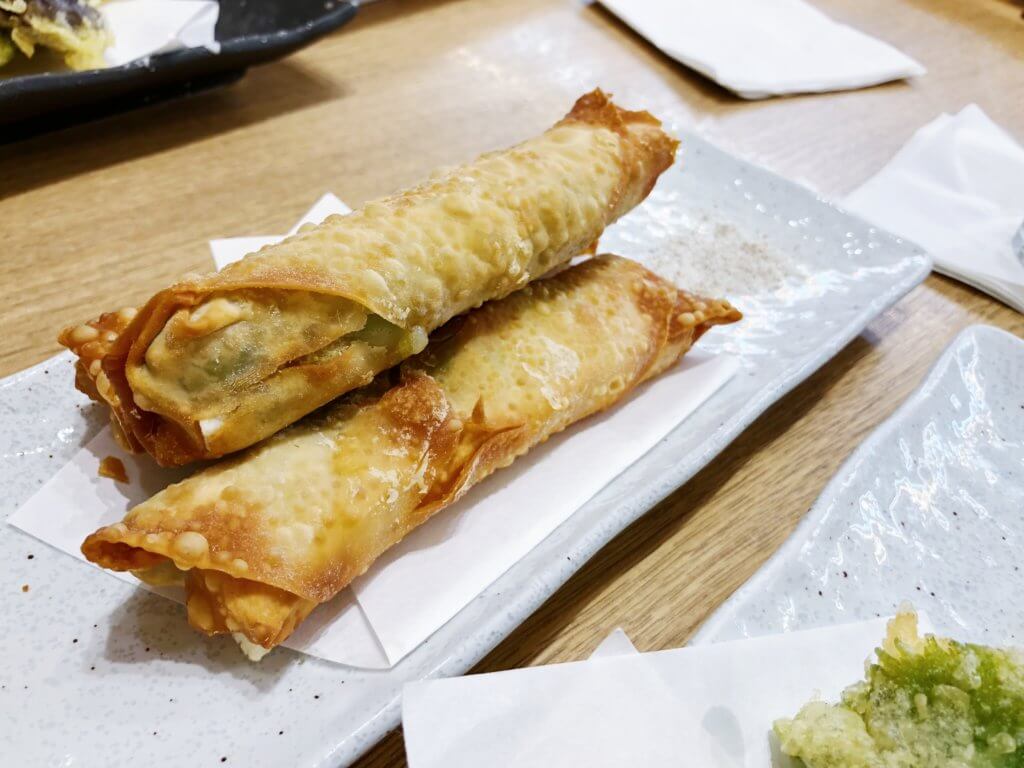 My other favorite hot dish is the Mochi and Avocado Spring Roll.  Crunchy on the outside, but soft, chewy, and creamy on the inside.  It just works.  But, again, you’ll need a sprinkling of salt with each bite.

Despite a few not so great pieces, Katsumidori Sushi is a solid place to dine.  And I don’t mean this for only inexpensive sushi dinners, but anytime.  The biggest challenge, of course, is securing reservations, so plan accordingly.  And just remember to maybe avoid the uni.

It’s also worth noting that Katsumidori doesn’t have a full bar.  That being said, they do have a selection of beer, sake, shochu, wines, and soft drinks.