Last month we introduced a new feature on this site to receive email blog post updates from Jeffsetter every time we post something new. We called it the Jeffletter and around 50 people signed up for the newsletter right away. Since then, the letter has started to grow modestly and we hope that it continues to grow at a healthy pace moving forward. We are considering adding more of a prompt for people to sign up when visiting the site, but haven’t worked up the nerve to do that yet.

Before reaching critical mass with the Jeffletter, we want to make sure that we are sending it out at a pace that everyone finds agreeable. That means that we don’t send out these emails too often or not often enough.

When we first started the newsletter, we thought that sending it daily would be the best idea – because then visitors will never miss the most recent posts as soon as they come out, especially posts with time-sensitive deals or promotions. With our email provider, we have the option of sending emails on a daily or weekly basis and sending them weekly seemed like too far in between emails. END_OF_DOCUMENT_TOKEN_TO_BE_REPLACED 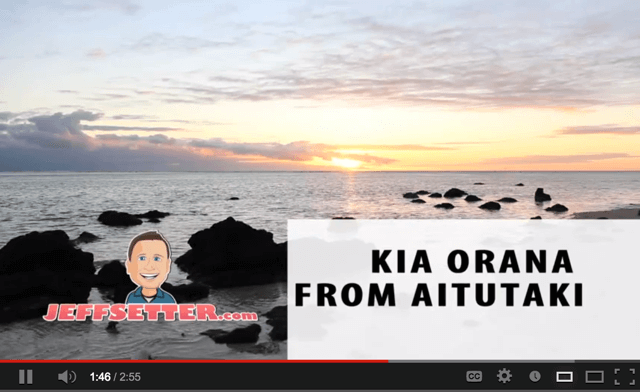 On a rainy day in Aitutaki in the Cook Islands, I found myself with nothing to do but try to make a video for the website. The result? A semi-professional looking video blog post that I’m hoping you enjoy!

While I hope the video looks like it was easy to make, it actually did take some time and effort to get it done, especially with a slow Internet connection on an island. I would love to hear your thoughts on the video and if you are looking to make video yourselves, check out How to Make a Video Blog Post and hear the story behind how this video was made!

END_OF_DOCUMENT_TOKEN_TO_BE_REPLACED

I visited Amsterdam for the second time in my life during December of 2011. While I only had 18 hours to spend in the city during a long layover, I made the most of it by seeing what the city has to offer when Christmas is in the air.

While Christmas in Amsterdam was not as ornate or prevalent as it was in Prague and Vienna, it did have some good sights to behold. It was also quite rainy. 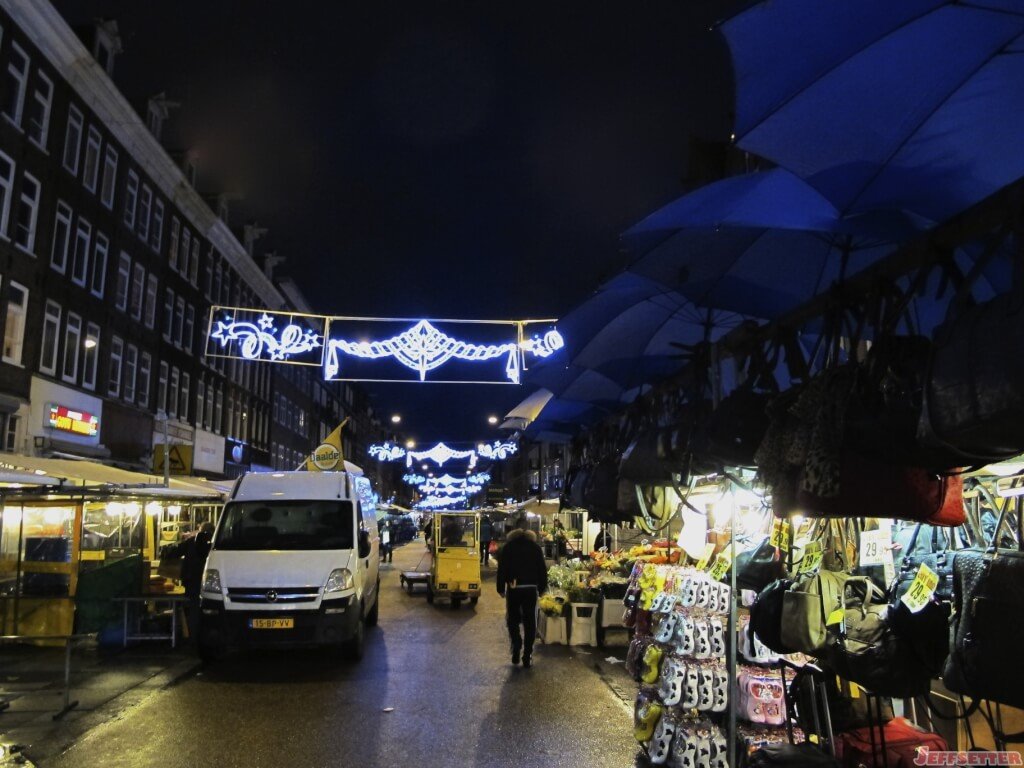 Since it was raining outside and we didn’t have much to do while killing time, I ended up taking many pictures of the city and playing around with some of the color options in my camera. I especially like the color combinations I was able to capture in the city. 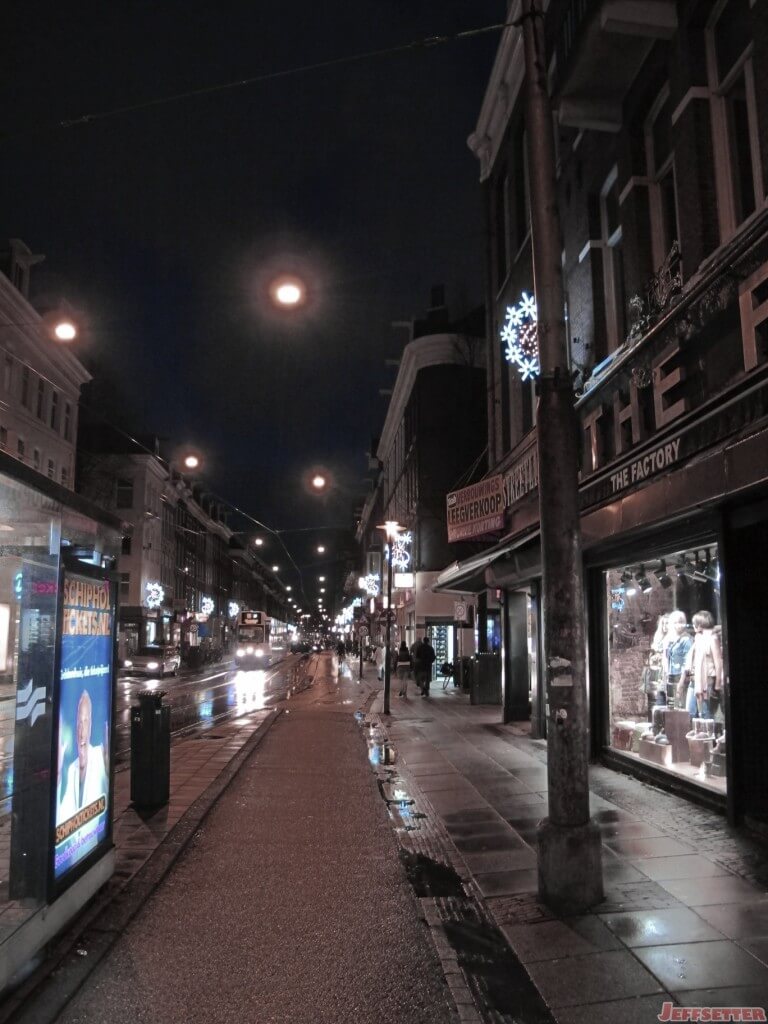 My favorite photo is probably this Green tinted photo. Not only do we see that it is indeed Christmas time, we also see the beer that puts Amsterdam on the map worldwide (Heineken) and the green permeates through most of the picture as well.

Last, I love the biker in the picture who is passing by so fast that we can hardly see their silhouette as they pass by.

Amsterdam is a great city for bikers, and we had people on bikes passing us by at all times of day, even in December when it was raining outside and cold. 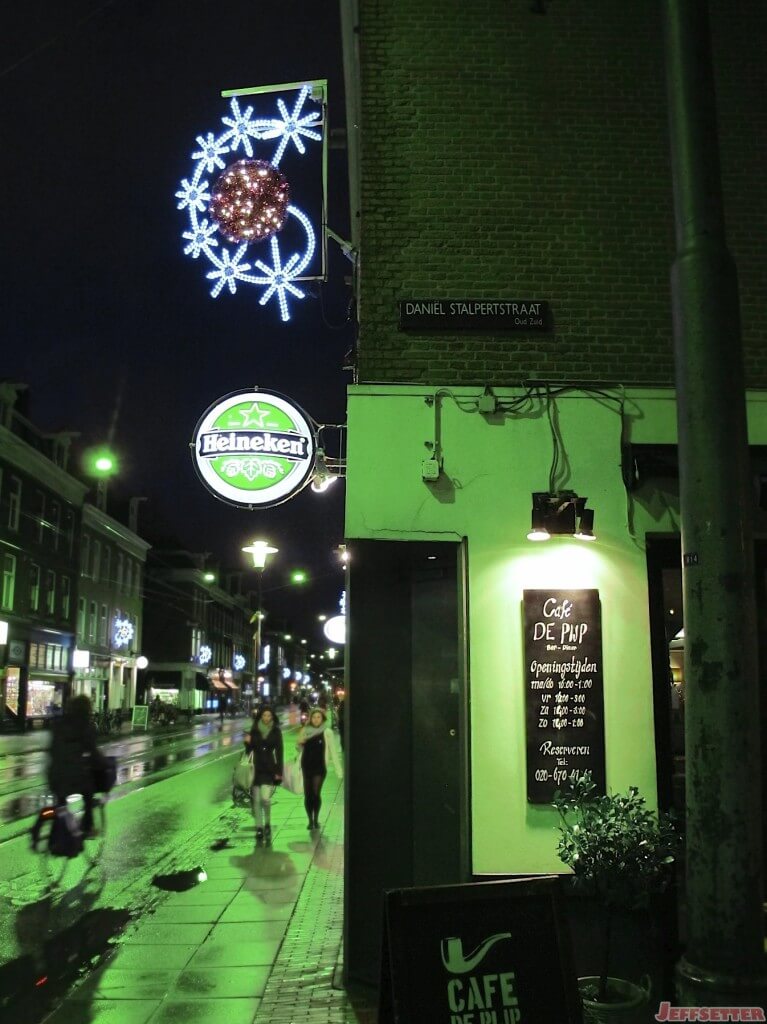 During our short stay we managed to walk in front of the Heineken brewery, but did not go on a tour because the lines were too long. 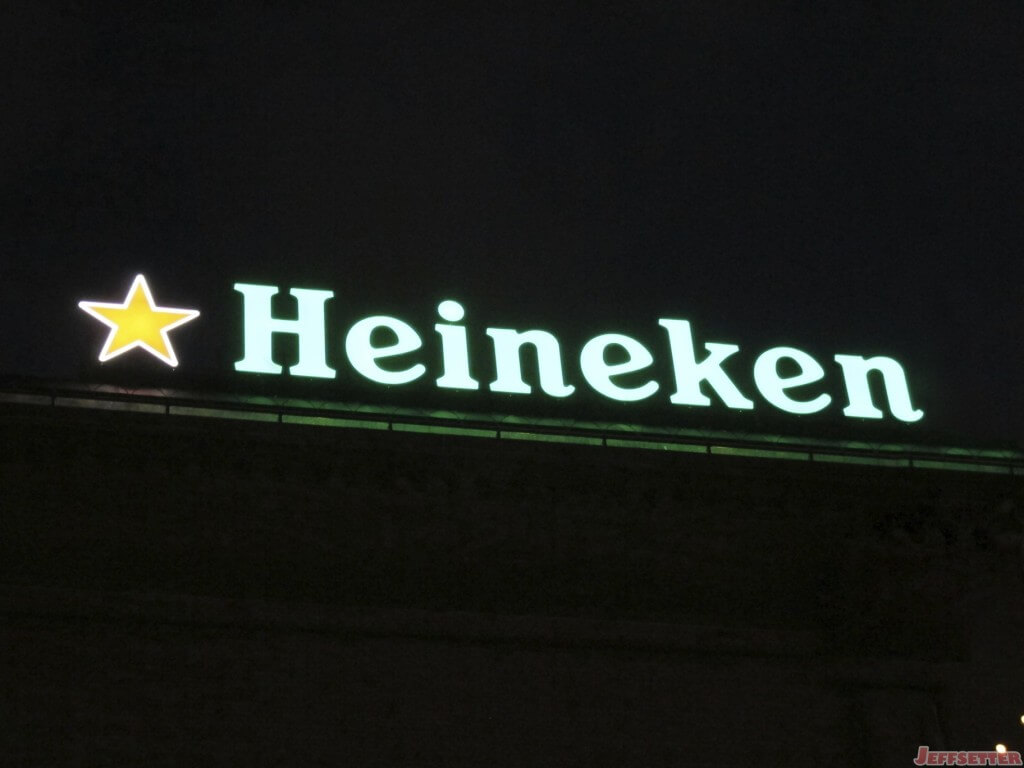 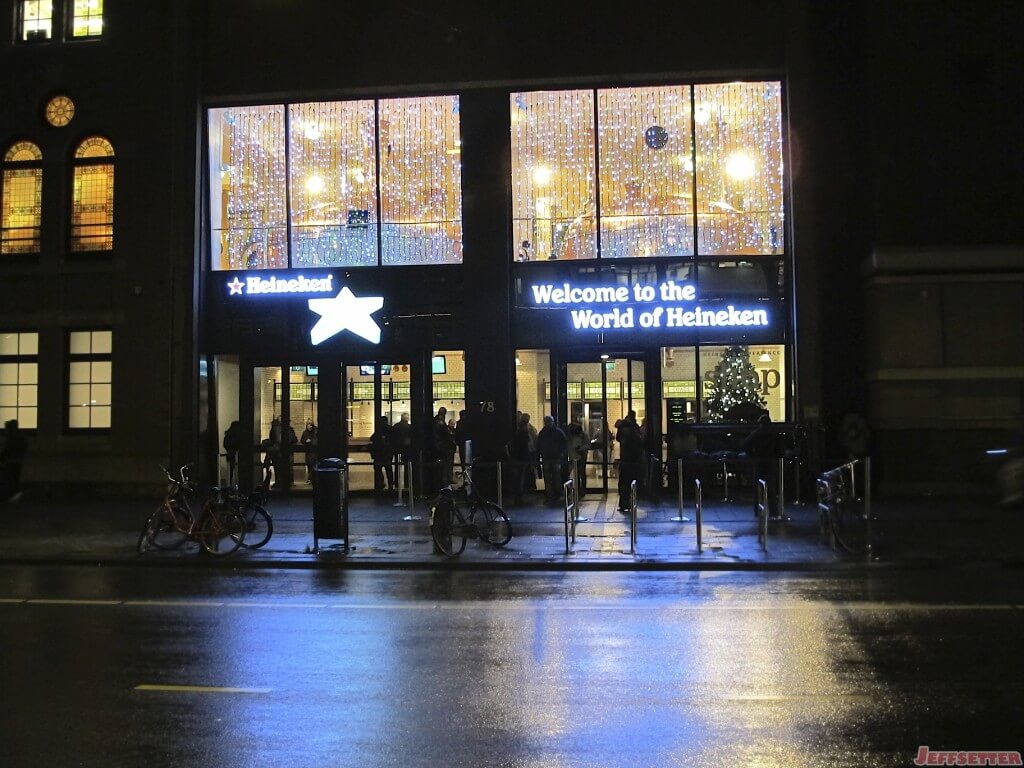 We also stopped at the main train station in central Amsterdam. This is where trains, cable cars and busses all meet. 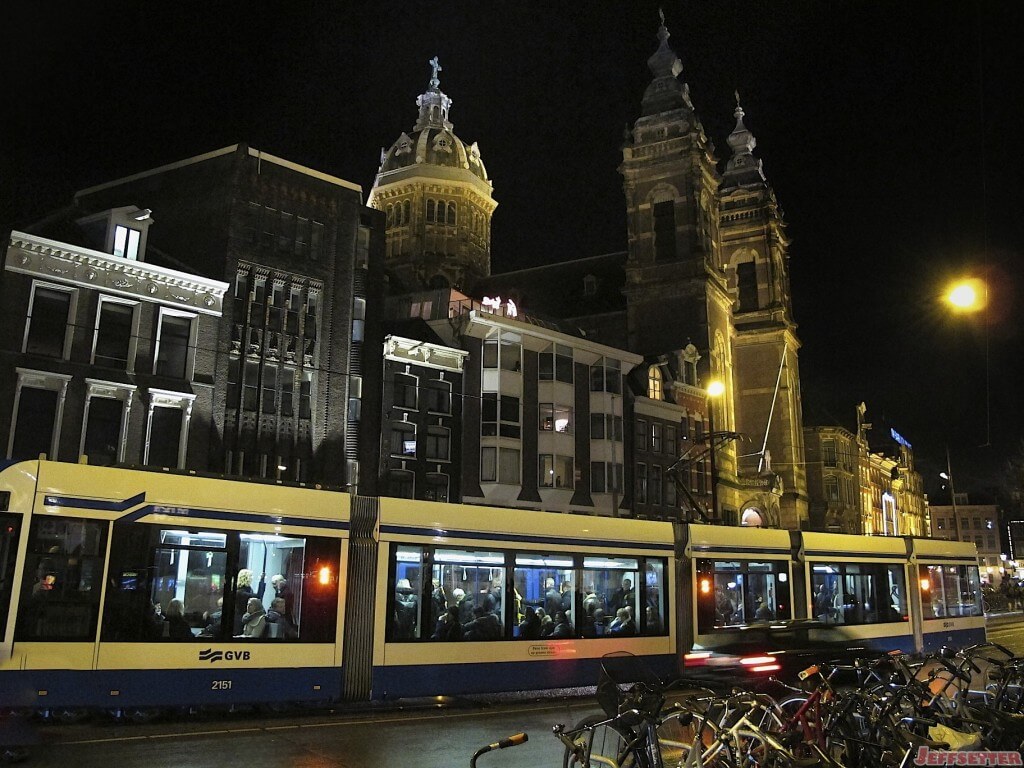 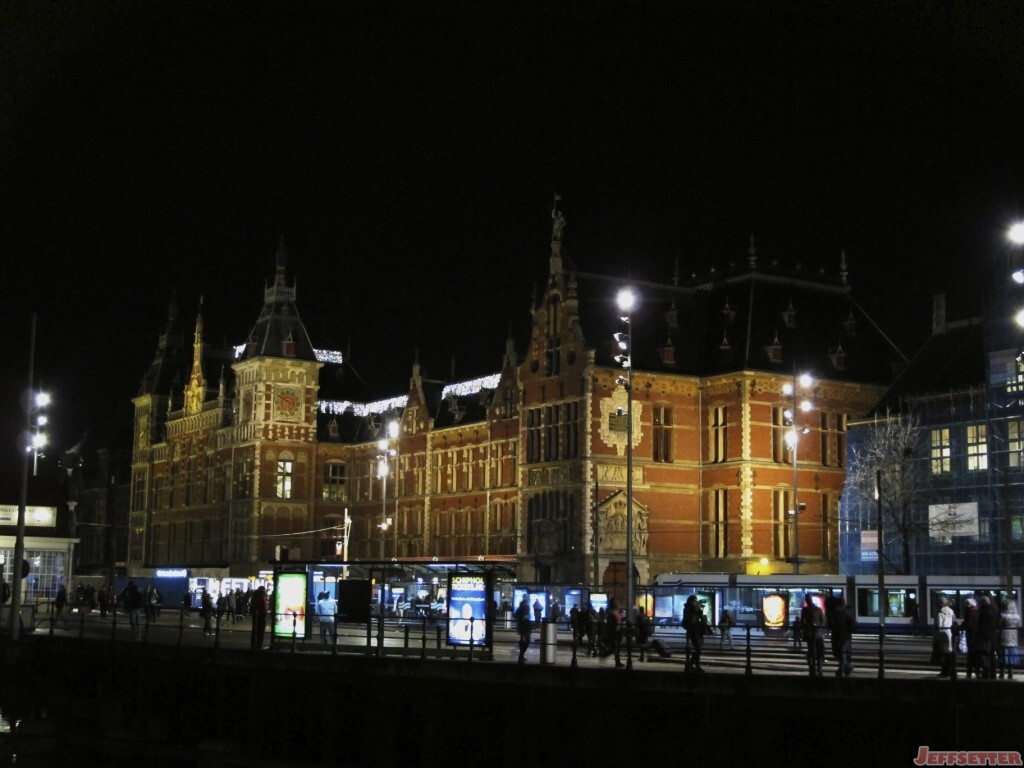 Even the Red Light district was beautiful at Christmas time in Amsterdam. 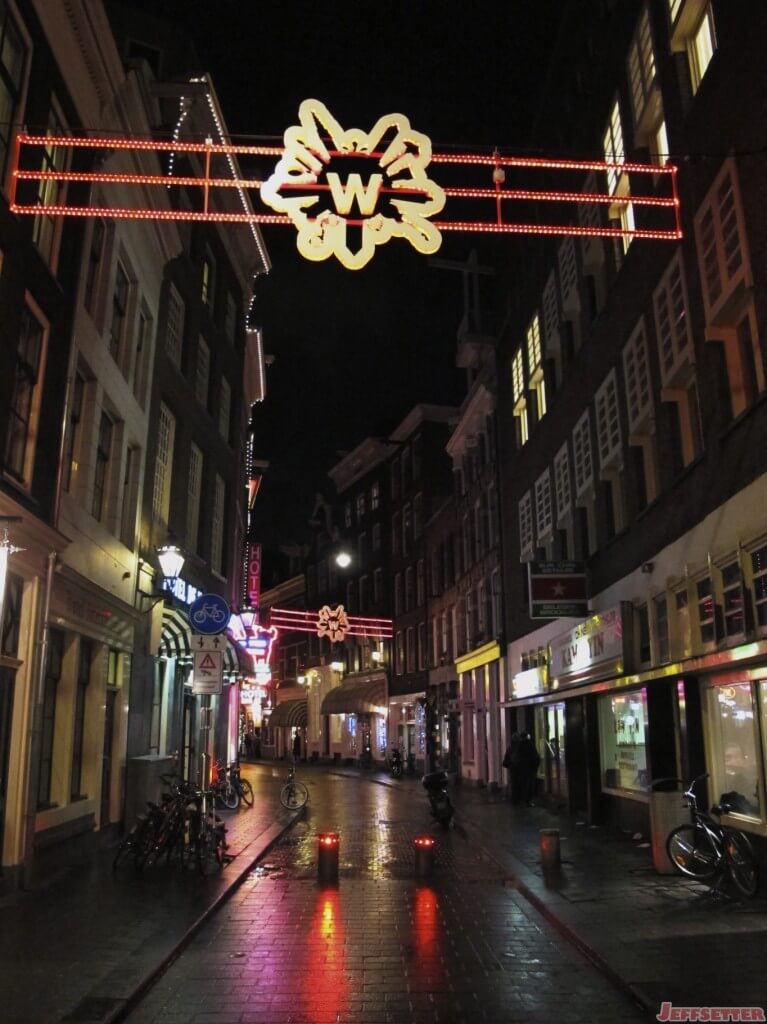 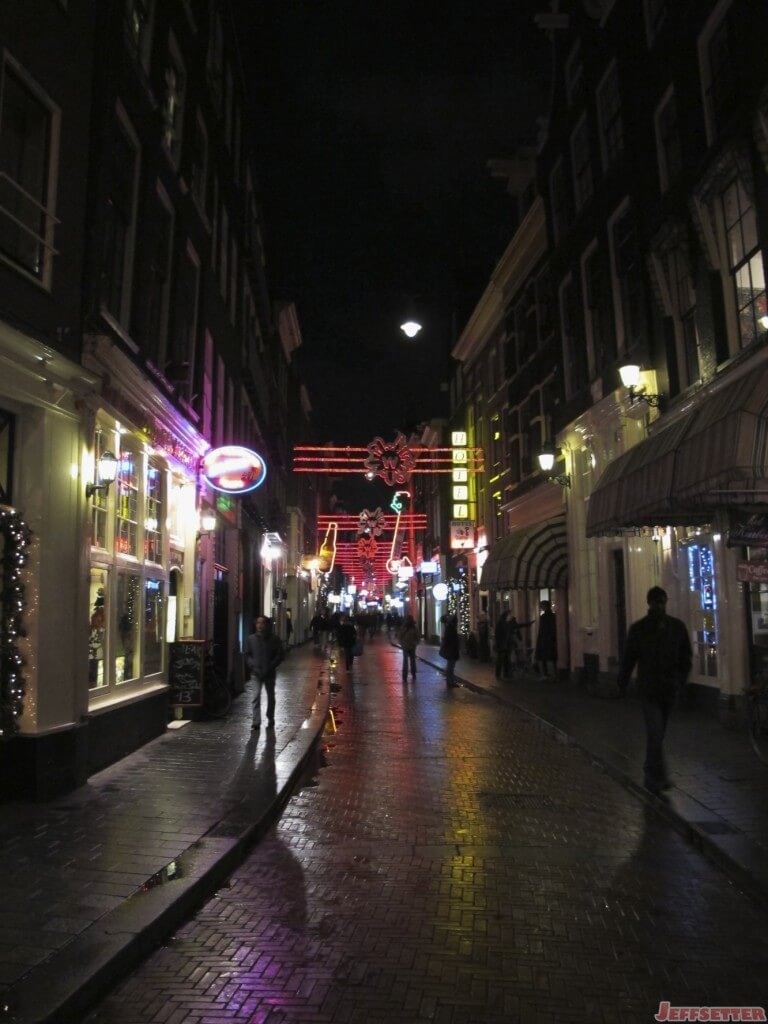 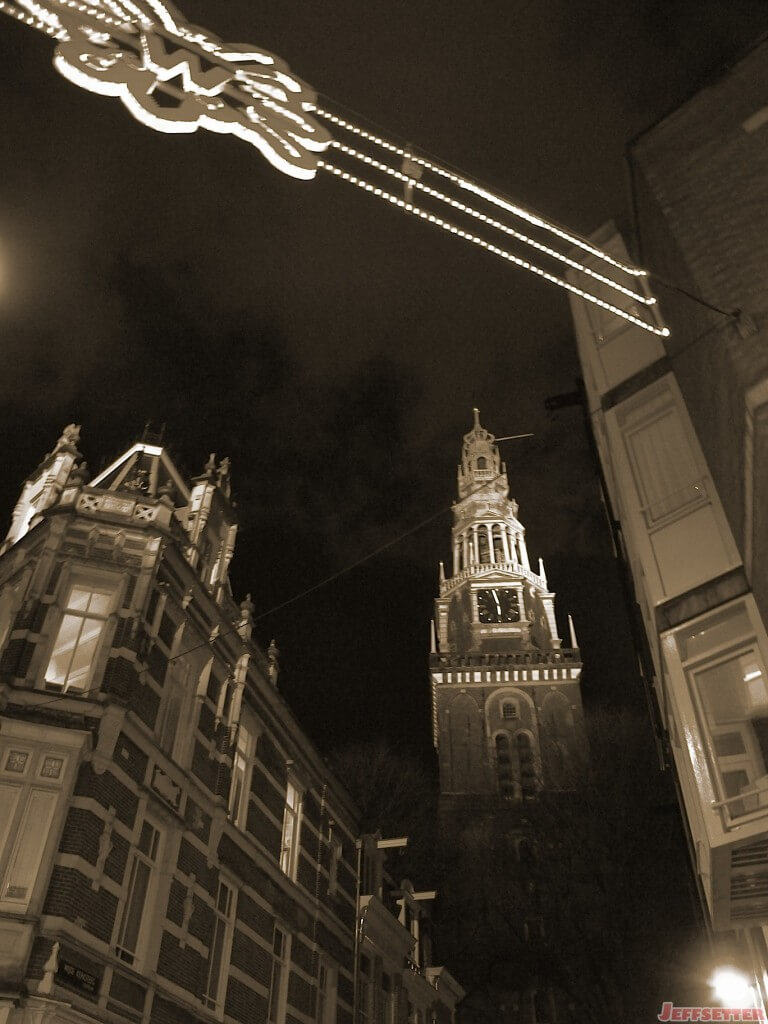 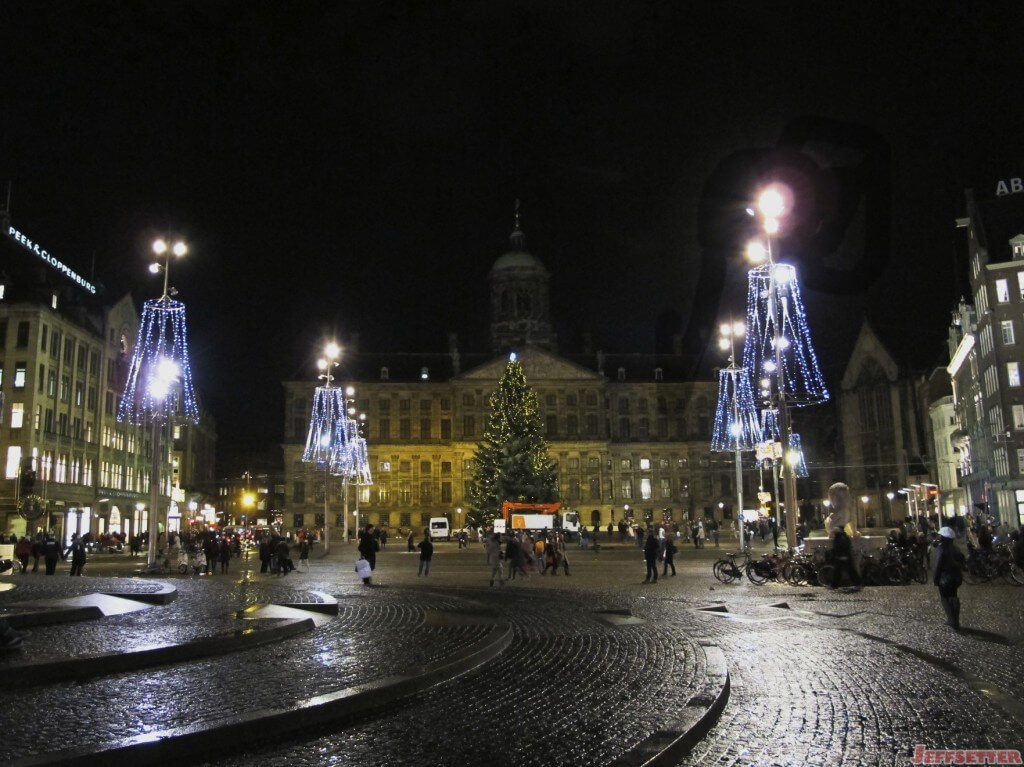 In what now appears to be stereotypical fashion, we made sure to stop at some places that offered us a taste of America. The Burger Bar had excellent hamburgers and the bar we stopped at had all kinds of American beers on tap. I made sure to have something more local, though. 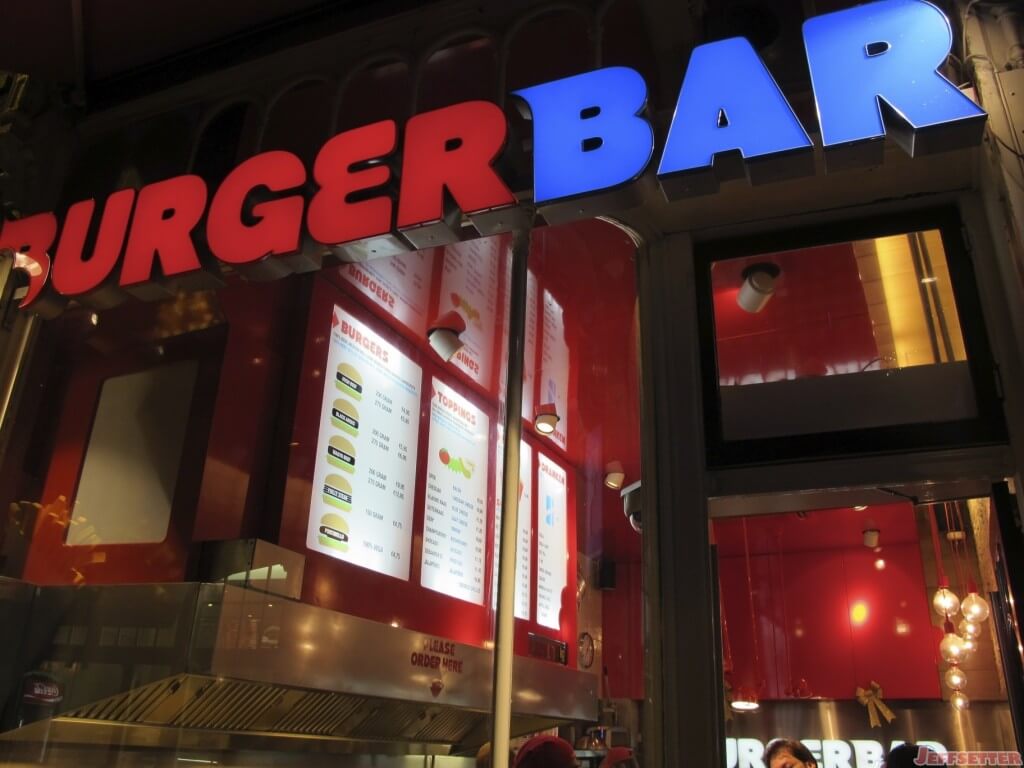 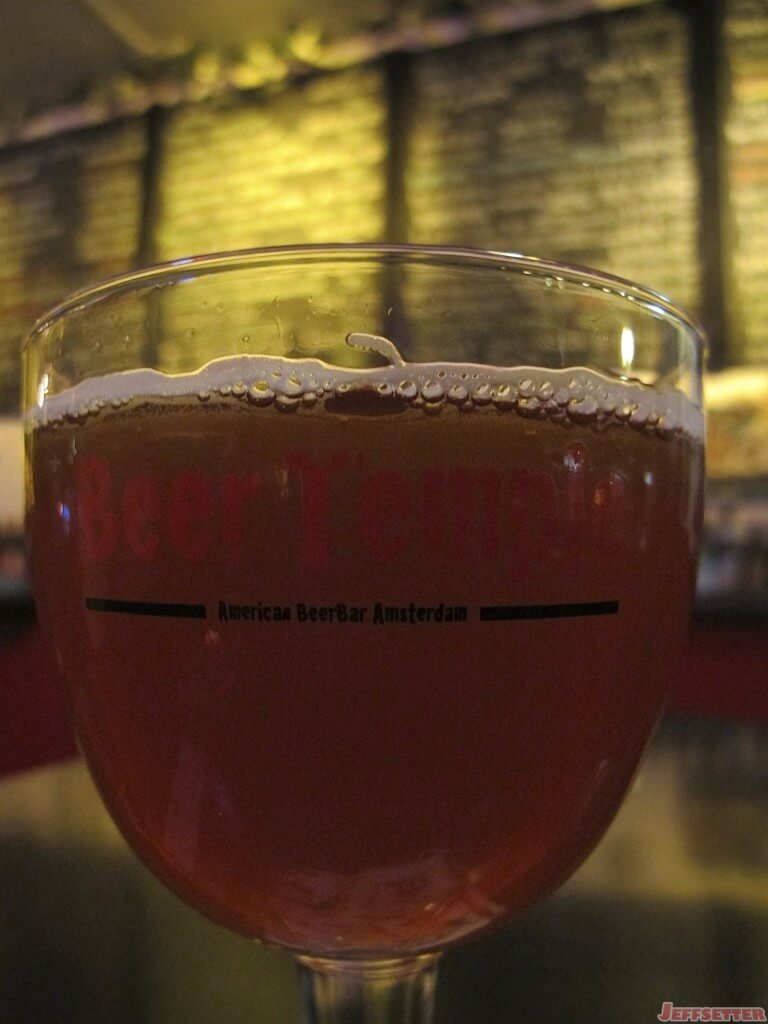 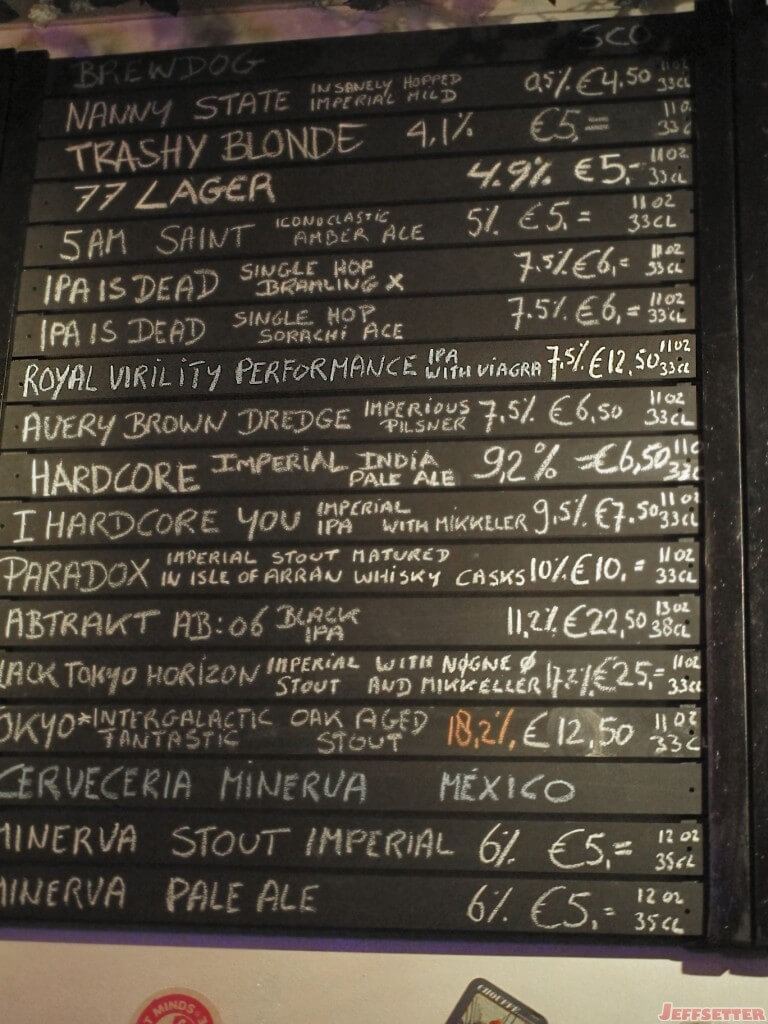 Last (but not least), who can forget the giant turtle statue on the road outside of our hotel? 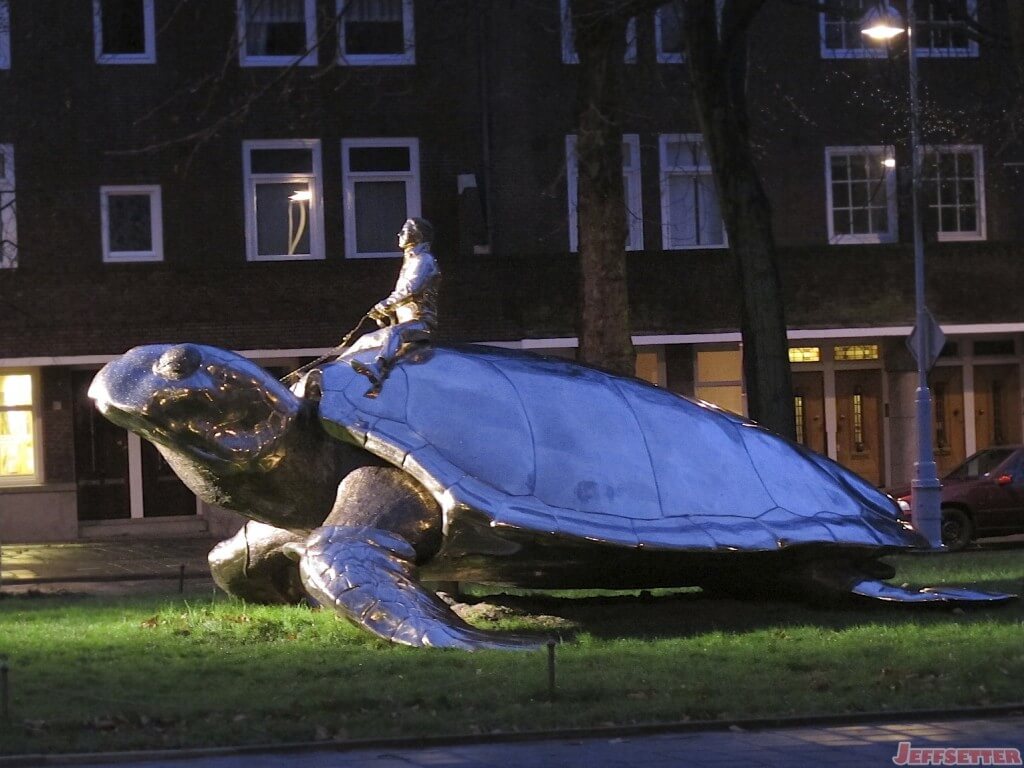 Amsterdam in Winter is really not too bad weather-wise. It was cold and rainy, but above 40 degrees. I would especially recommend visiting Amsterdam around Christmas time to see the lights and markets that pop up during the month of December.

Last week I published a post on International Business class and there were some good comments and discussions on that post. One camp fell into the boat of that it’s absolutely “worth it” to go business class every time and the others were saying that it’s not always practical to fly business class.

Since the discussion was so lively I figured it would be a great source for the next poll. What are your thoughts on flying internationally – do you go with the cheapest ticket or hold out for a great flight in business class?

One thing that I should clear up is the flaw in my post which said “it’s totally worth it” – it is such a subjective word that everyone has a different interpretation. What I should have written was “International business class is totally worth the wait” – because that is what I meant in this case. END_OF_DOCUMENT_TOKEN_TO_BE_REPLACED

My first international flight I was in the dead middle seat of an airplane with a 2-5-2 configuration. The second 8 hours were on a sweaty voyage to Nairobi, Kenya. At 6’2″ tall and probably too wide for my own good, I did not really enjoy this experience. This was too long ago for me to obtain a seat map drawing of that flight, but you can imagine this is what I looked like on that flight:

Imagine if you will that the (J) blob above is me sitting in between several other passengers on their way to Nairobi. I hated every minute of that flight and similarly cramped flights I took later in life. I’m just too big to be comfortable on long haul flights when I am sandwiched in between others. That’s why I try to fly business class every time I fly internationally (and the part of the inspiration behind my Delta Business class/heavenly bedding post earlier this week).

I just assumed that most frequent travelers felt the same way as well, especially after reading reviews of Lucky’s exploits all over the globe in First Class. To me, that was the whole point of the miles and points game: to go beyond your normal means and fly like royalty. END_OF_DOCUMENT_TOKEN_TO_BE_REPLACED 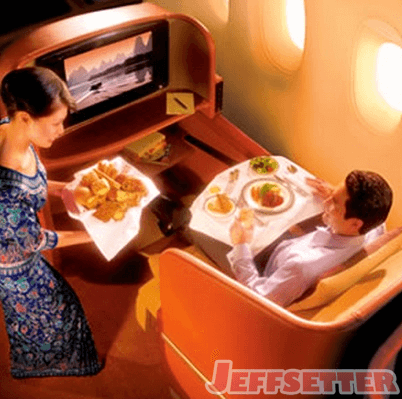 Last week we talked about domestic airlines in the United States, so this week I thought we would focus on international long haul travel. If there is one thing I learned from talking with other frequent travelers in person, it’s that everyone has a different idea of how they like to approach an international flight. Some people want to travel the world in the cheapest way possible and don’t care about seats. Others only seem to fly when they have the opportunity to enjoy a 7 course meal in the sky with a lie-flat seat.

I expect that due tot he varying travel styles we all have that this poll will see a lot of diversity in the results. I also suspect that some people will have a hard time choosing just one answer.

Note: You by popular request, I have modified the poll so that you can vote for up to 5 factors when filling out this poll.