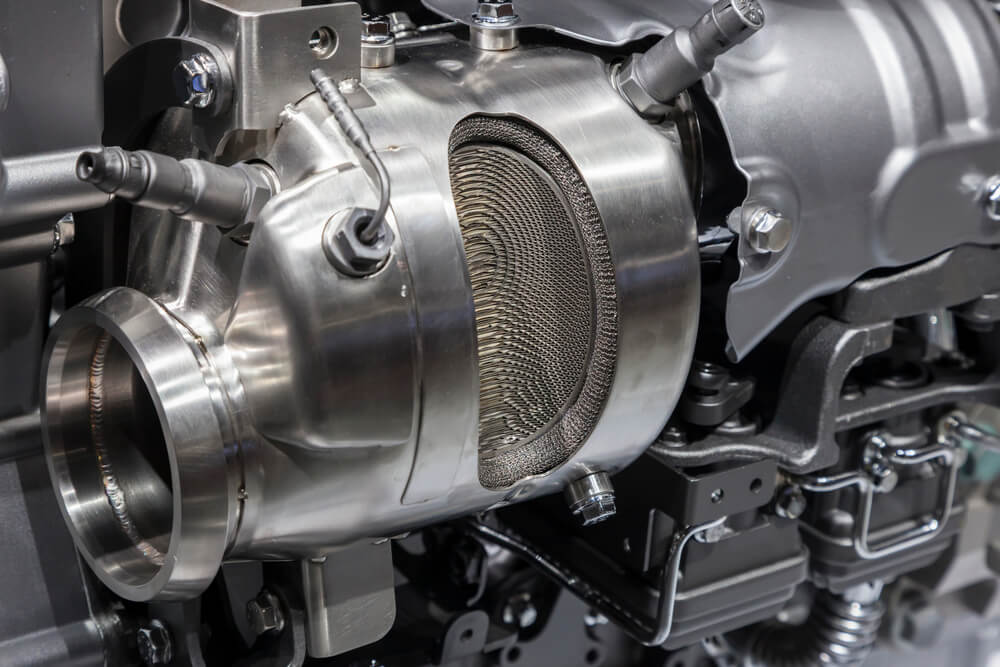 All of our reviews are based on exhaustive research, industry experience and whenever possible, hands-on testing. When you make a purchase using one of our chosen links we’ll a small percentage of the proceeds. This supports the site and keeps Jeffsetter running. You can read more here.

But what types of RVs have catalytic converters, and what do these even do? Let’s take a look!

What does a catalytic converter do?

Catalytic converters do indeed convert, and they are key to controlling your vehicle’s exhaust. They are designed to turn harmful carbon monoxide fumes into carbon dioxide and water. Catalytic converters are found on traditional fuel based vehicles as well as diesel. Their diesel counterparts are a bit more complicated, but do essentially the same thing: convert the exhaust!

These key components of any transmission are usually easy to spot, located beneath your vehicle between the engine and exhaust systems. While crawling under your rig may not be your favorite activity, it’s smart to know where these pipe-like components are located!

You may not have been aware of a catalytic converter on your rig, and that’s a good thing. These little guys are designed to do their job with little to no maintenance, and you will notice that there’s a problem if your rig starts up a lot louder than usual. But more on that in a moment.

What types of RVs have catalytic converters?

Depending on the size and capabilities of your rig, you may have more than one catalytic converter. My tow vehicle, a Toyota Tundra, has two, nearby one another. Motorhomes can require multiple catalytic converters as well, depending on their size. It’s easy to see where they are; simply get underneath your rig and search for these pipe-like components between your engine and exhaust systems!

On paper, a catalytic converter is meant to last around 100,000 miles or roughly ten years, depending. However, some vehicle owners never need to replace these key parts, and so maintenance isn’t always a necessity. This is nice to know, as there’s always plenty to take care of with an RV, especially a motorhome!

You can purchase some catalytic converter cleaners, though the reviews are mixed in terms of their effectiveness. More often than not, catalytic converters struggle because something in the transmission or engine is struggling first. You may get a check engine light for your catalytic converter’s performance, but it rarely ends up being the part that needs replacing!

Some signs to keep an eye out for should you be worried about your catalytic converter include:

Catalytic converters can also get clogged, leading to melting or overheating of its internal parts. This is where a cleaning solution could come in handy, but, as I said, the reviews are mixed on whether or not these work. Physical damage should be the most of your worries, so make sure to avoid bad spots in the road on your next trip, if you’re able!

The biggest concern that you should have about your catalytic converter is how easy it is to steal. Catalytic converter thefts are sweeping the nation, from thousands of city Priuses to hundreds of RVs parked in dealer lots. These parts are being stolen just for their precious metals involved in making them. A huge pain for anyone who owns a car, especially knowing that their catalytic converter is just being melted down for scrap!

Are RVs having their catalytic converters stolen?

RVs and motorhomes with catalytic converters are huge targets for theft, as rigs are often left in storage or generally unattended for many months out of the year. Whether it’s an RV brand new on the lot, a slew of rigs being stored at an outdoor facility, or your motorhome parked in your covered driveway, catalytic converters have been stolen.

What can be done? There’s no such thing as peace of mind if a catalytic converter can be stolen in minutes, right from the comfort of your driveway. Plus, if you rent an RV storage site, your catalytic converter can also be stolen from their supposedly protected lot. These parts are such a hot commodity right now, their ease of access being the biggest appeal to thieves!

Take a breath, no need to run out and check on your rig right this second. There are some preventative measures you can take, and we’ll dive into those next! Simply living outside of a city or heavily populated area should help your chances a bit, though this is a nationwide phenomenon.

What can you realistically do to prevent your catalytic converters from being stolen out from under your rig? Let’s check it out together!

There are a number of precautions you can choose, depending on your financial situation and desire to prevent theft. RV catalytic converters have been stolen in any situation, from a driveway to a campground. These options may help you sleep easier at night.

Ever since I lived in Portland, OR, I’ve invested in comprehensive insurance for my vehicle. I’ve had things stolen from inside, and an entire car taken from the street outside my home. Police are often too busy to bother finding stolen cars in a city, so I knew a comprehensive insurance plan with a low deductible was a must for me and my vehicles.

If any parts are stolen from your RV, you can have them replaced and paid for with comprehensive insurance. While insurance claims often drive up the cost of your overall policy, paying for a low deductible isn’t a bad idea, especially if you are travelling to places you’re unfamiliar with or are nervous about.

RV insurance is a must for me as a full-timer, but it might not have been something you’ve considered before. I highly recommend it, for the safety of you and your passengers as well as other travellers on the road. Insurance, especially comprehensive, is a must if you’re worried about paying for replacement parts!

Get a protective metal plate

If the products weren’t on backorder, I’d be getting a proper skid plate for my Toyota Tundra like, yesterday! Protective metal plates are on the rise for preventing catalytic converter theft, as these are the best ways of deterring thieves looking for an easy steal. While these plates may not be made for your specific RV, I recommend talking to your local RV repair shops or dealerships about options.

These metal plates attach easily to the underside of your vehicle or rig, usually held by strong bolts. Most catalytic converter thefts happen with a very specific cutting tool; the robbers cut the pipe with ease and are in and out quickly. A heavy metal plate that completely covers any access to your catalytic converters is an excellent deterrent!

I hope that skid plates are available for RVs and motorhomes, but I’m not sure if they are at this point. More often than not, these plates weigh at least 50 pounds for a truck, let alone a large motorhome. Adding extra weight to your rig may not be ideal, but it could be worth it, especially if you plan to store your RV for a long period of time.

It may seem like a pain, but there’s always the option of temporarily installing a skid plate while you’re storing your rig, and removing it while you’re on the road. However, I definitely advocate for a permanent installation, as catalytic converters have been stolen from parking lots in broad daylight!

CatClamps or other wire options may work 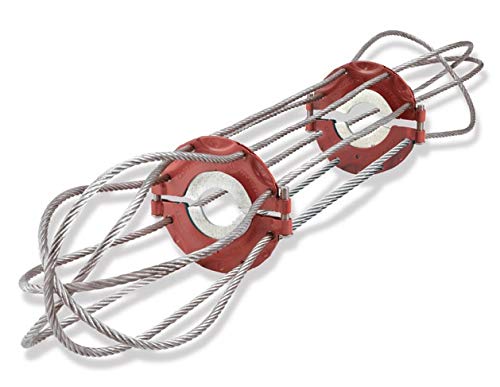 There’s a popular product available out there called CatClamps. This ingenious invention clamps to your catalytic converter and makes it basically impossible for anyone to cut it out of your vehicle or rig. They form a cage around the pipe, made of heavy grade airplane wire. These can fit most motorhome catalytic converters as well, not only conventional vehicles!

The reviews are mixed, but if you’re gearing up for a big trip and don’t have time to install anything more severe or update your insurance policy, these should do in a pinch. The price point should be right for most RV owners, especially when you consider the cost of replacing a catalytic converter!

You may also have luck bringing your rig to a muffler or RV repair shop and requesting heavy duty wire be welded to your catalytic converter. This airplane wire can’t be easily cut through, and welding it permanently is a cost-effective alternative that many muffler shops have offered to their customers.

Permanently welding your CatClamp product is also a good idea, if you can. While they do work without having them welded, many reviewers mention that the cage rattles and bounces while they drive, often causing more annoyance than they’re worth. Something to keep in mind, should you be seeking last minute fixes!

Get a specialized vibration alarm 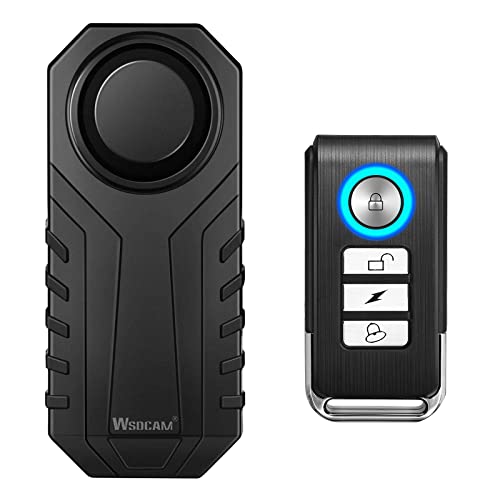 This little gadget from Wsdcam is a game changer. Sometimes an alarm is enough of a deterrent for thieves, especially if you plan on storing your RV outside your primary residence. This alarm could be a total game changer for campers, as it is portable, removable, and has many other features!

This anti-theft alarm triggered by vibration, with up to 113 dB loud alarm sound can help to deter thieves effectively, provide additional security and give you peace of mind when your vehicles are parked at home or outdoors. There are 7 levels of adjustable sensitivity from gently touch to push or beat. While it should be removed before you take your rig out camping, this alarm can be easily reinstalled while you park at the store or elsewhere!

These alarms can be sensitive, so I don’t recommend leaving them armed while you’re occupying your rig. However, having one isn’t a bad idea, especially given its fair price point. Plus, you could get multiple and attach them to your various recreational items too, such as bikes, kayaks, etc. The loud alarm should be enough of a deterrent for a skittish thief, and if you’re a light sleeper like me, it’ll definitely wake you if you’re nearby!

While this probably won’t help if your rig is being stored, this is my top recommendation to prevent catalytic converter theft. It is cost effective, easy to install, easy to operate, and most importantly loud. Pop it right onto your catalytic converter for sensitive arming capabilities, and remove it before you hit the road.

Not all RVs have catalytic converters, since these auto parts deal solely with exhaust from an engine. However, knowing that you have one and what it might mean for the life of your RV is important. If you own a motorhome or other rig with an engine, take care of your catalytic converters, especially from theft. They’re more well-known than you think!