Our second full day in Vegas would see us leave the Strip once again.  But unlike the previous day, this time we headed north to Zion National Park.

Day two in Las Vegas saw us leaving the Strip once again.  But unlike the previous day, we headed north for a 162-mile drive.  This time our destination would be Zion National Park near Springdale, Utah.

Getting to Zion National Park

Prior to our trip, we decided that we’d make it a point to get to a scenic area to do some hiking.  Mrs. Island Miler had already been to Red Rock Canyon, so we opted to give Zion National Park a try instead.  But since Zion is located in Utah, it meant that we’d have a long drive to get there.  In fact, Google Maps quoted the drive at over 3 hours in length.  So, to make best use of our time, we headed out of Vegas at 7am, with an anticipated arrival time of 10am PST. 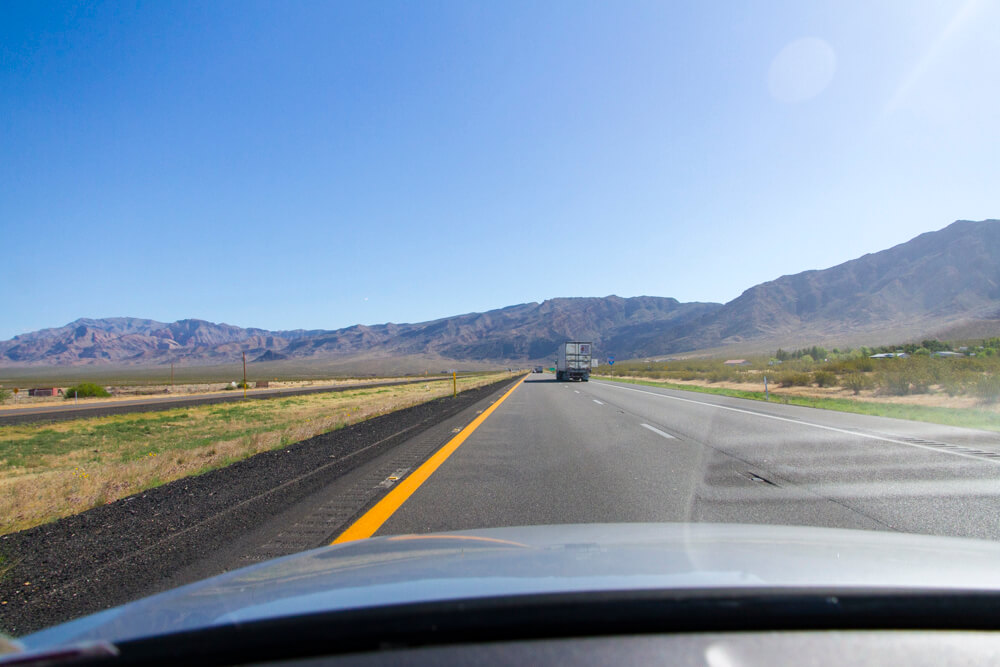 From the SLS Las Vegas, the journey was pretty straight forward.  Once out of the Strip, all we had to do was jump on the I-15 and keep on going.  My biggest fear of this drive was probably boredom due to the monotonous desert landscape.  And yes, the drive in Nevada was pretty dull and boring, but as we got closer to Arizona, things got more interesting. 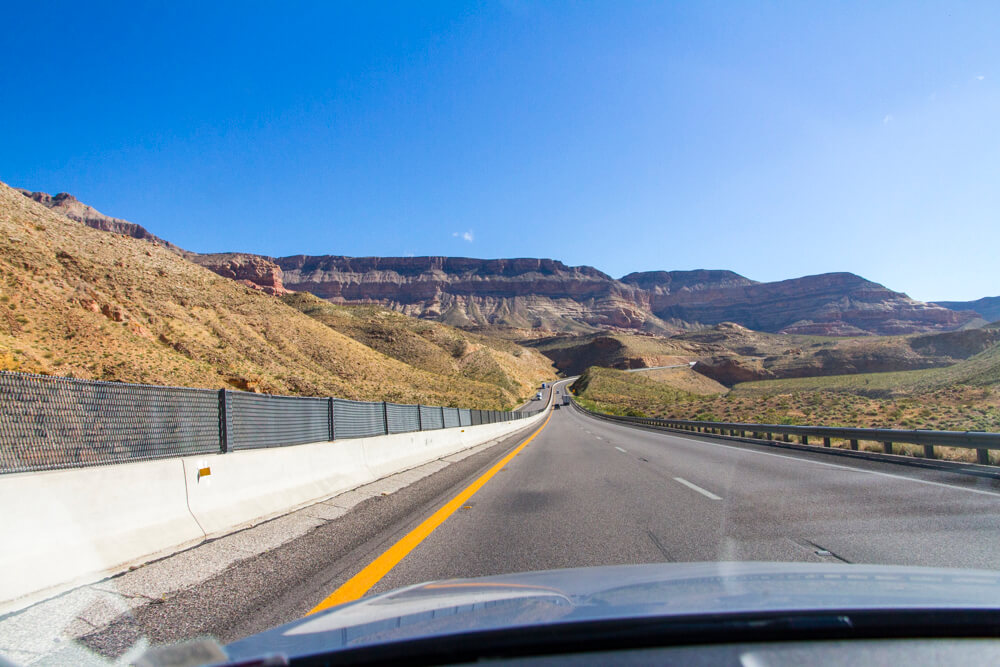 And, of course, once we hit Utah, the sights became far more interesting. 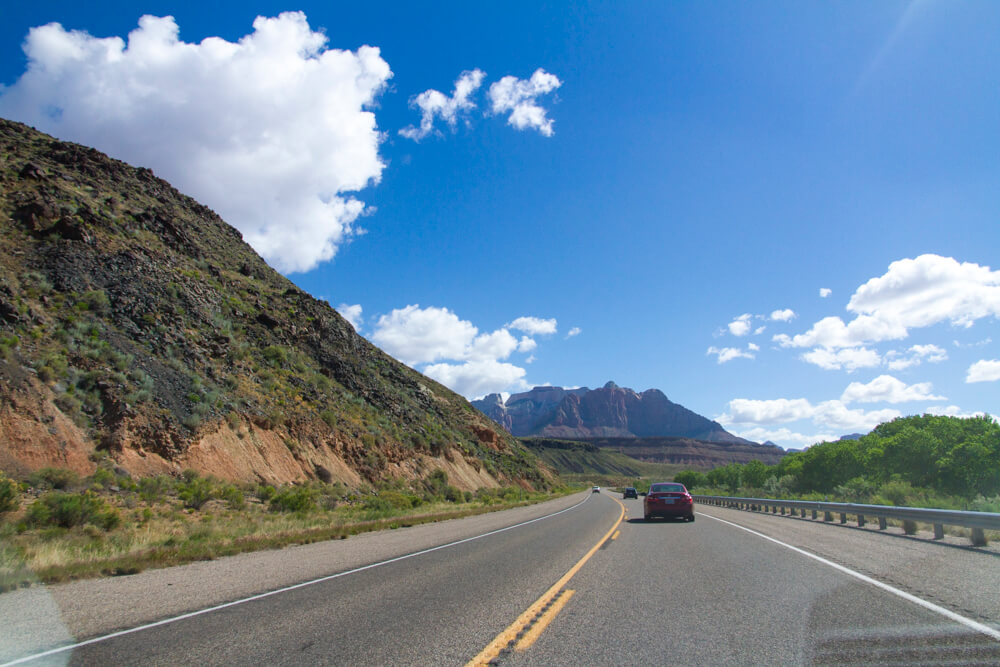 Of course, having an awesome Silver Car as our rental car helped immensely as well.  The automatic climate control was great, as was the in-dash navigation system. 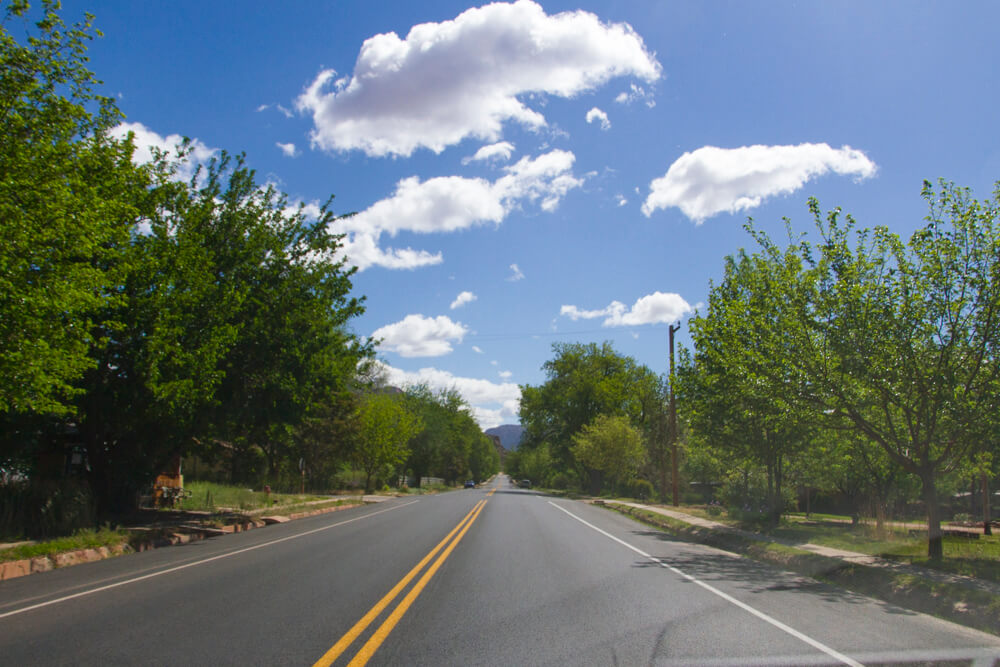 The final leg of the journey will take you through a few small towns, including the very tourist-oriented town of Springdale.  Things actually get a little confusing here, and we had a hard time figuring what was officially associated with the National Park Services and what wasn’t. 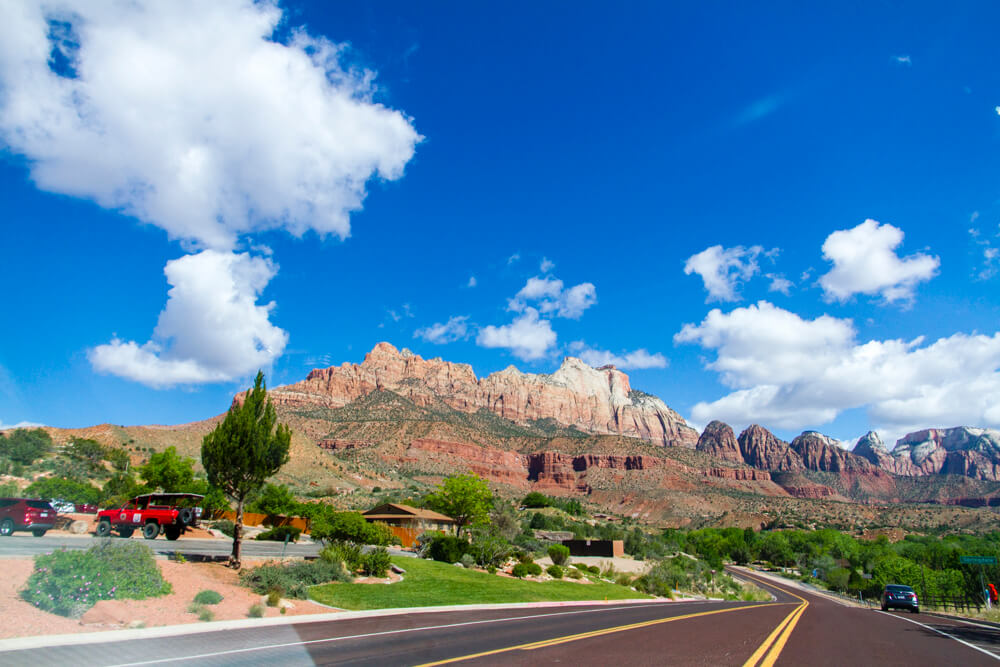 But, eventually we found out way to the park’s Springdale gate.

Arriving at the park was far more time consuming than I anticipated.  The congestion at the gate was pretty bad. 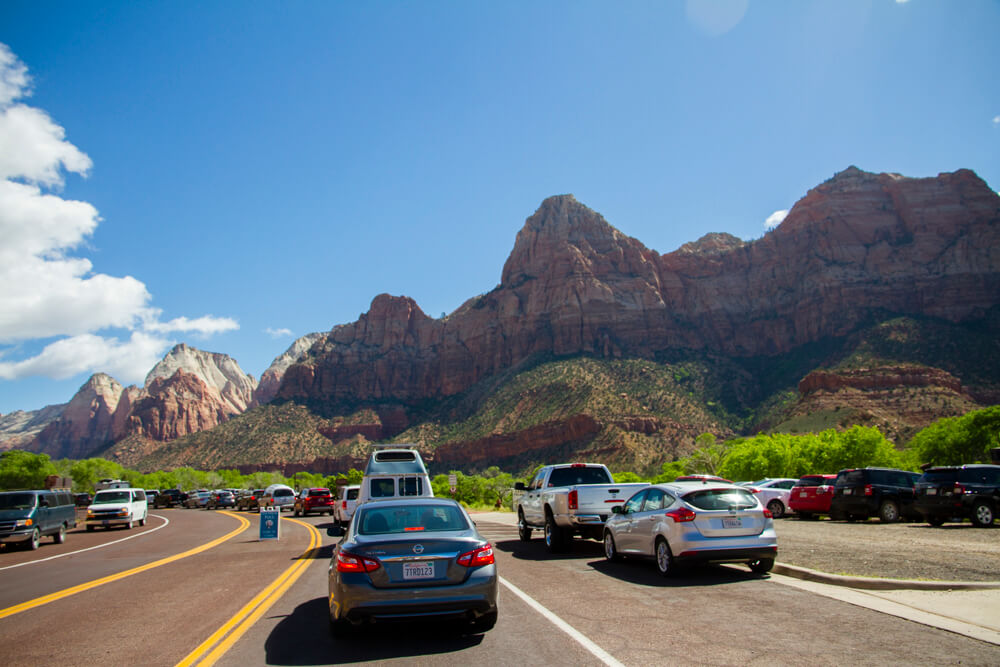 We would end up burning 30 minutes sitting in line to get into the park.  If, however, you already have an entry pass, the rangers will generally let you bypass the line and head straight into the park. 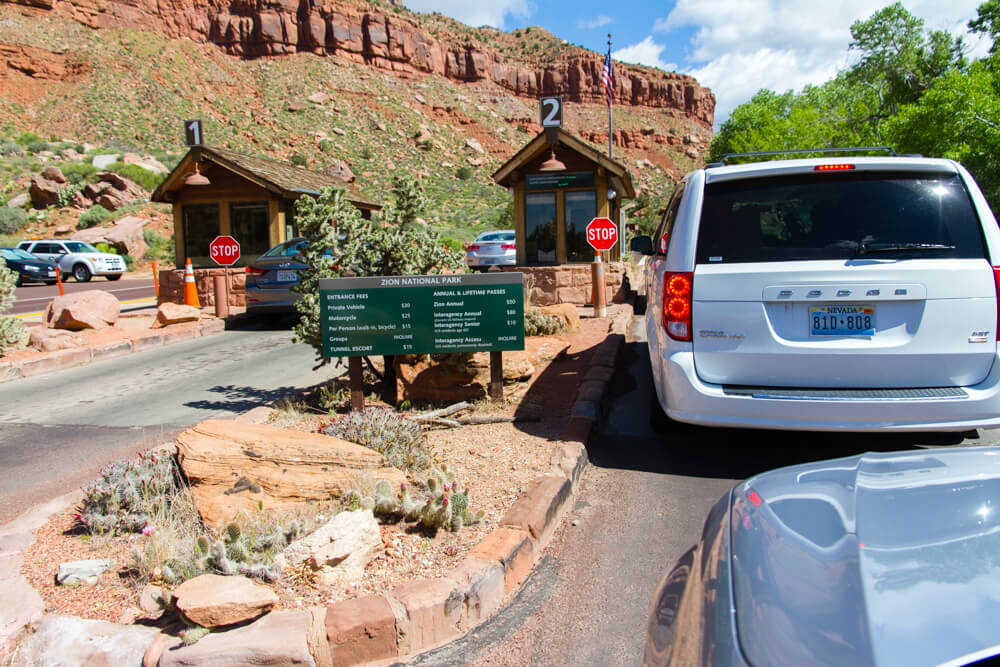 Oh, and while cash is accepted as a form of payment, credit or debit cards are preferred.  All major card brands are accepted, so be sure to make sure you have your favorite travel rewards card on you when you approach the gate.

Driving in the Park

Congestions continues to persist throughout the park.  So expect to drive at a leisurely pace and be prepared to stop often. 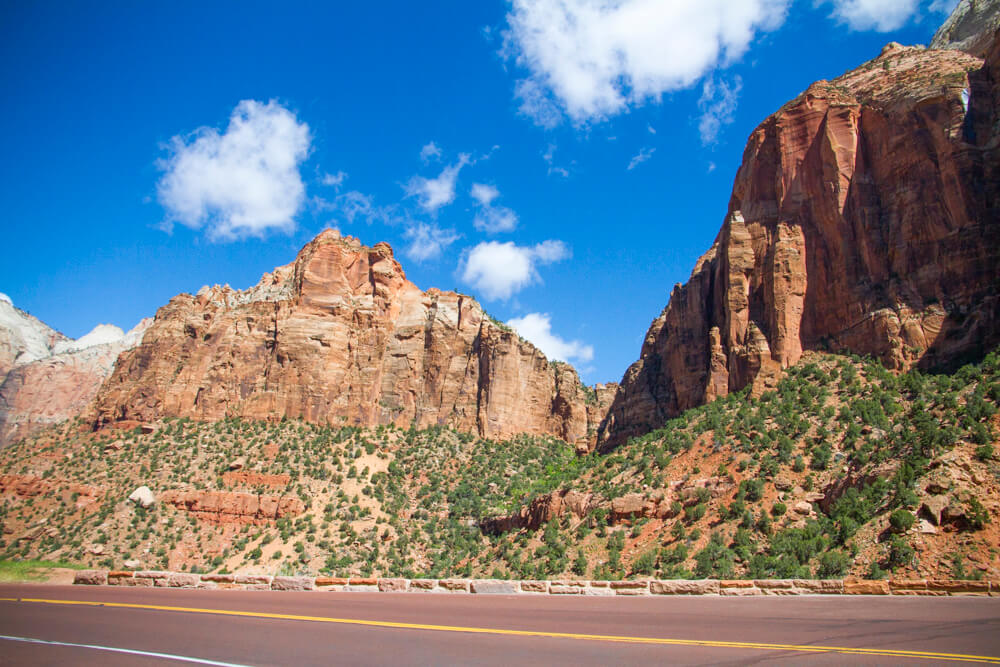 Our ultimate destination within the park was the Canyon Overlook Trail.  To get there, we had to drive up a series of switchbacks, and then through Carmel Tunnel.  Oh, and while the tunnel is two lanes, it’s quite narrow.  And at the time of our visit, Park Rangers were only allowing traffic to travel one direction at a time through the tunnel.

Once on the other side, the main parking for the Canyon Overlook Trail will be immediately to your right.  It’s a tiny lot and is almost always filled.  Thankfully, there is another lot a short drive down and to the left.  This one is really small too, but we lucked out this time around and were able to snag a stall. 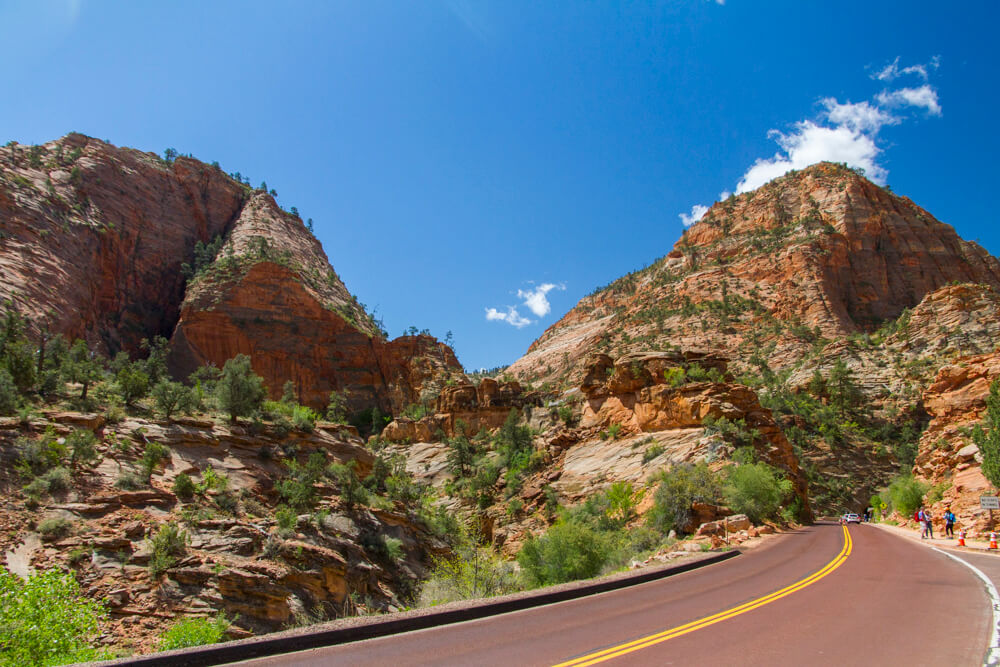 The above photo was taken from the Canyon Overlook Trail overflow lot looking back towards the tunnel.  The cars you see in the lower, right of the image are queuing for their turn through the tunnel.

I chose the Canyon Overlook Trail because it’s rated as an easy trail and has spectacular views.  In all, the hike should take the average person about an hour to complete.  And while the trail is easy, in a sense that it’s well maintained, it is a rather quick assent.  In fact, the beginning of the trail is a set of carved steps.  The view at the top, however, is already quite magnificent.

From there, hikers will traverse a pathway carved and constructed on the side of a cliff.  One part is actually a gangway constructed under the cliff face, but I don’t have any photos of it from the assent.  You can vaguely see the gangway in the photo below, but I’ll have a more detailed photo during the descent. 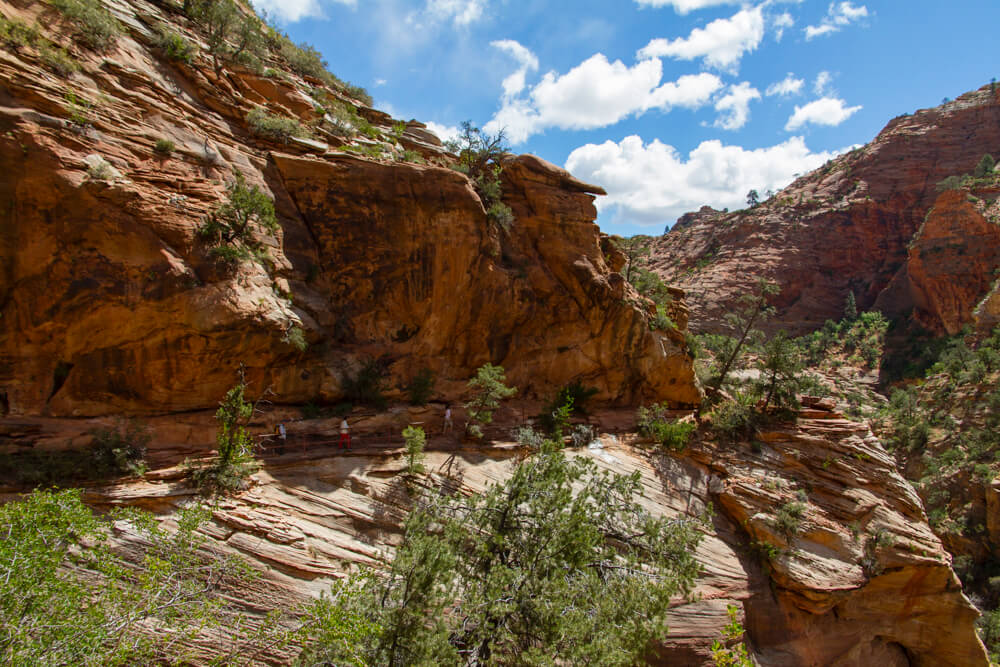 Did I mention the views?  They were great for nearly the entire hike! 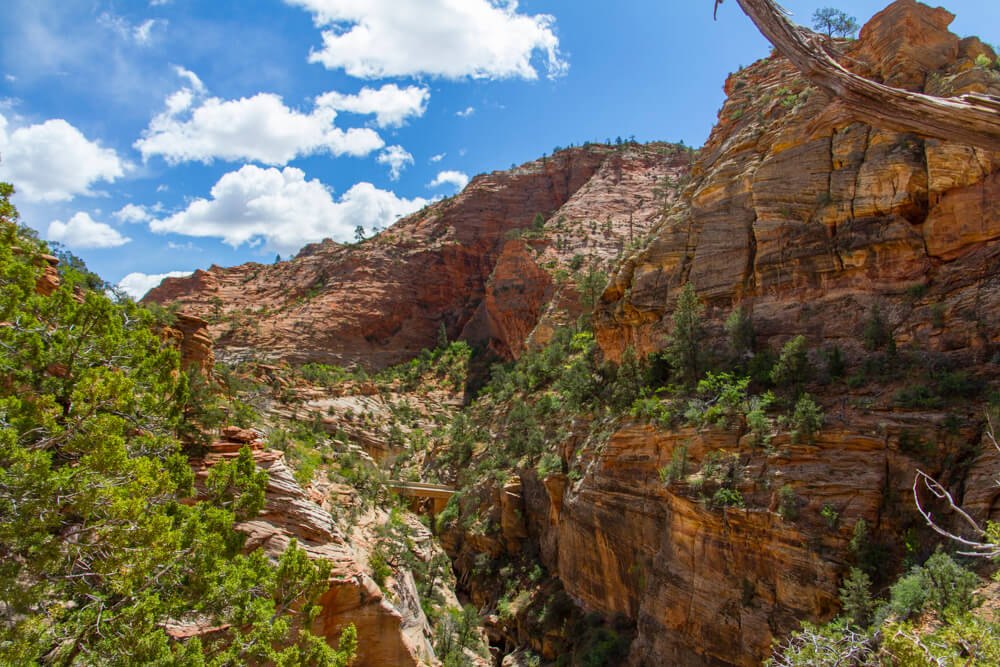 The most exposed part of the hike comes when you’re on a wide ledge with the cliff towering over you.  Parts of it do get a little narrow, though it’s not so bad.  In some areas you’ll have to decide whether or not to walk through puddles or walk closer to the ledge. 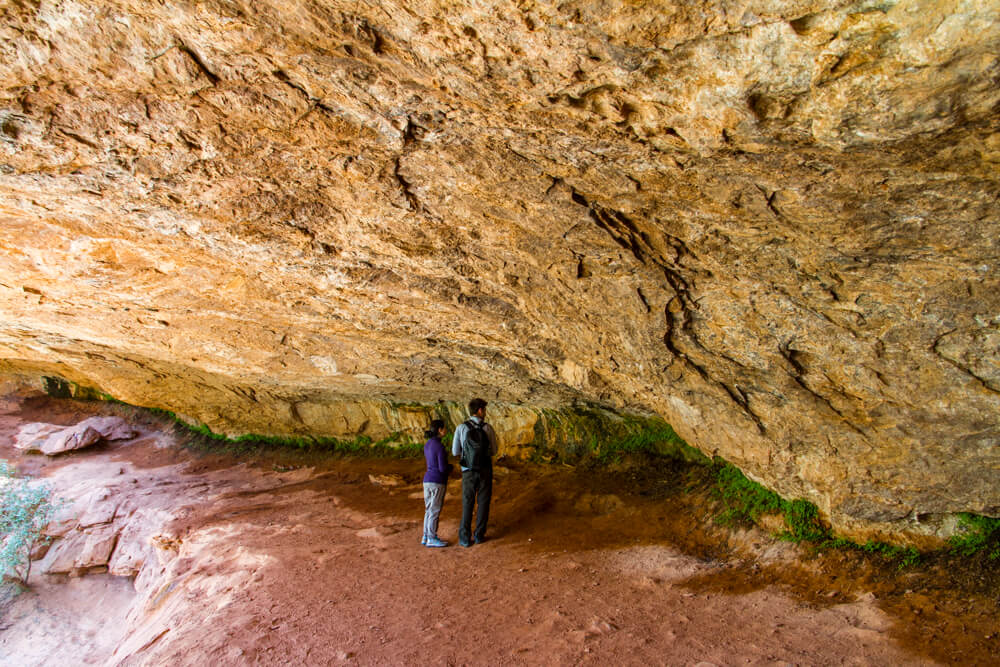 The second half of the hike gets more challenging once again, and even a little confusing.  We ended up taking the wrong way to get to the trail terminus, which ended up being more difficult, but not overly so. 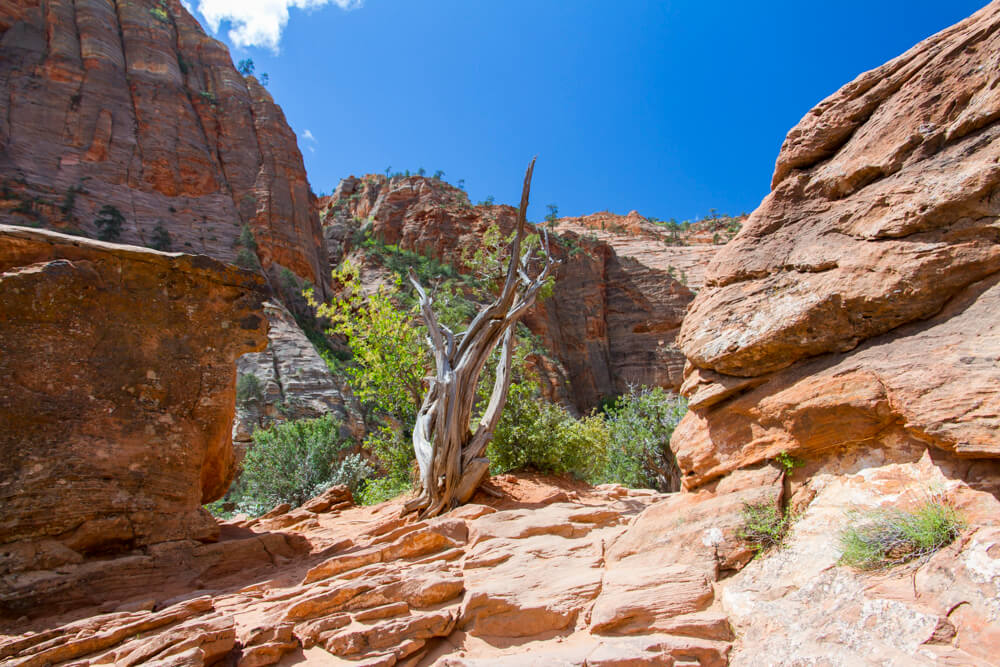 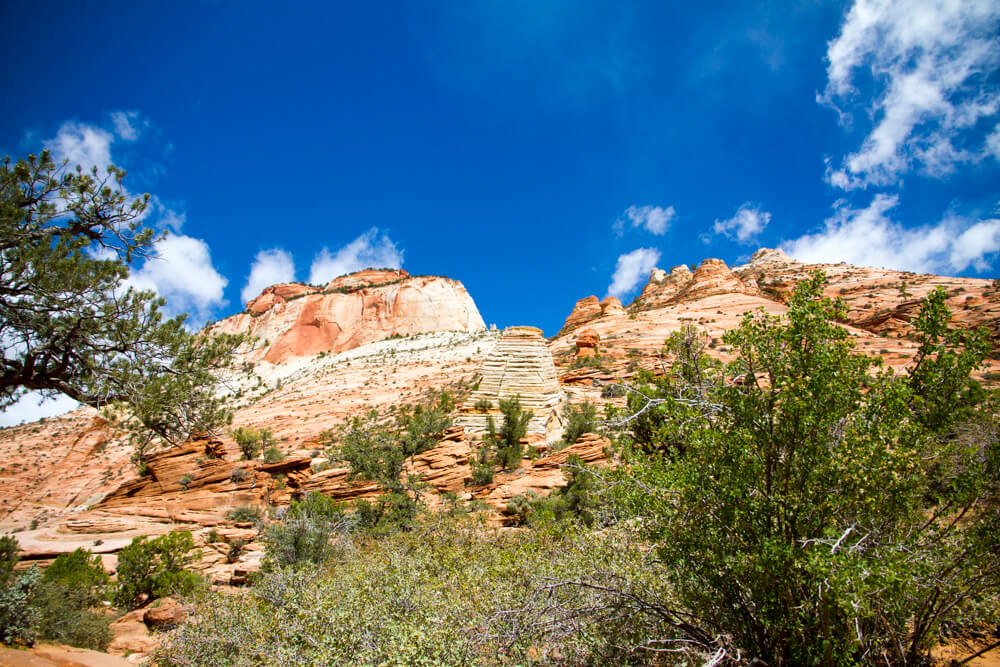 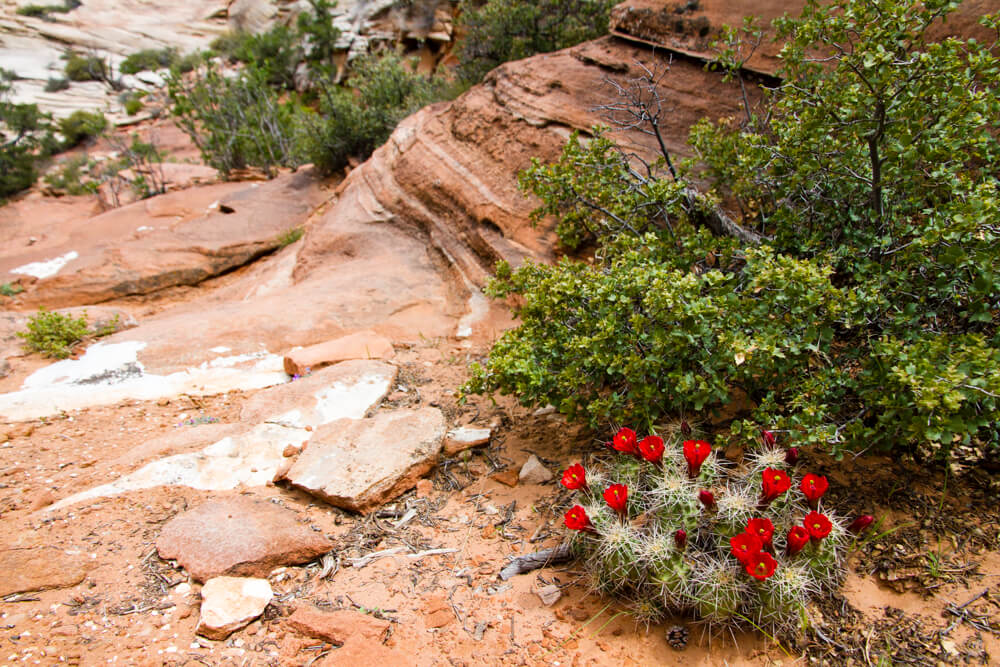 And if you go the wrong way like we did, you won’t actually see the trail terminus.  Instead, you’ll see this as you approach the canyon ledge. 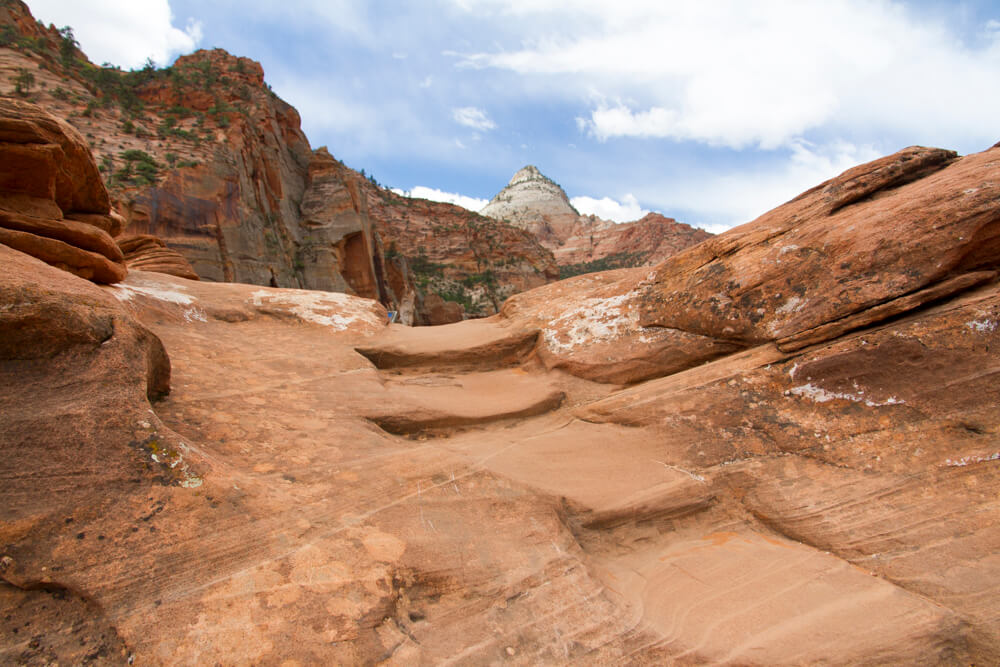 Of course, since we were on the trail, we ended our hike once we reached the canyon ledge.  From here, we had a beautiful, unobstructed view of Zion Canyon. 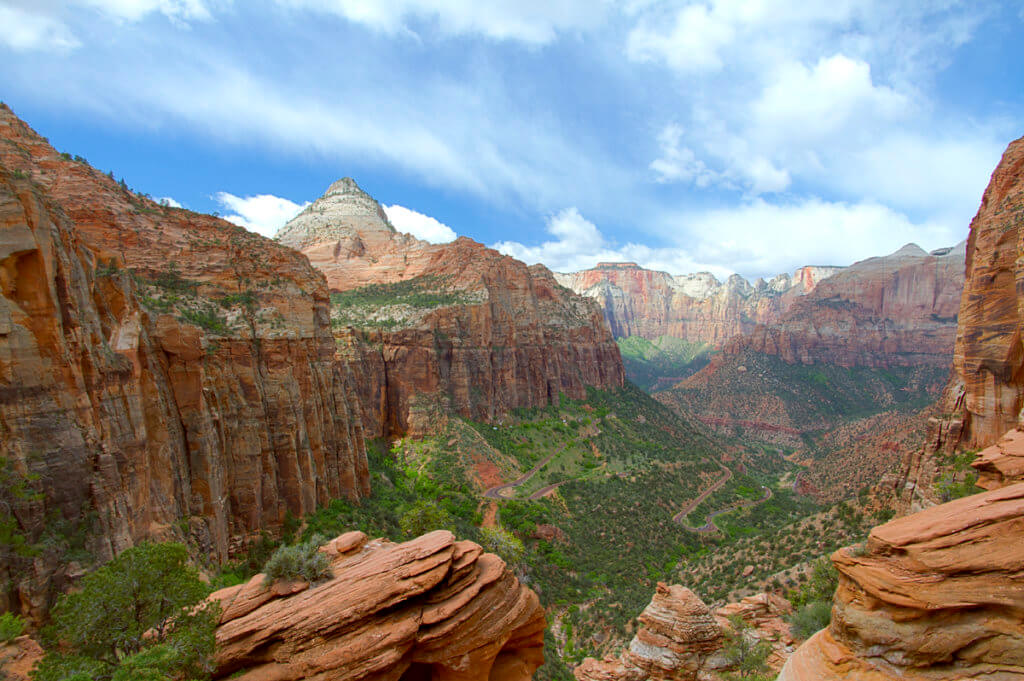 The view was absolutely breathtaking, and my photo does not do it justice.  And words simply cannot describe how beautiful this site actually is.  You simply have to see it for yourself.

Curious about our little misadventure, though, we decided to find the trail’s actual terminus.  It actually wasn’t far from where we were, maybe just 30 or 40 feet away. 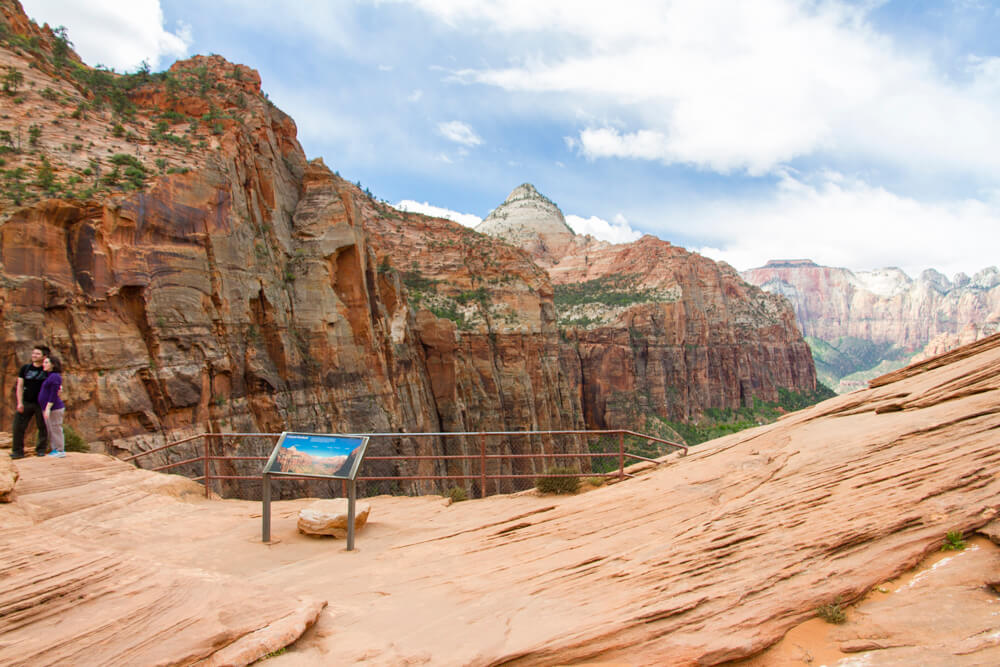 Here, we only have a few minutes to snap some photos before some Park Rangers came running up to us.  They informed us that the trail is now closed and we needed to vacate the area immediately.  One of the three rangers was carrying a rifle, and they said they were conducting “resource control operations.”  I assume this meant that a mountain lion or coyote was seen in the area.

While we were told to leave, we weren’t told go running down, so we took our time.  The descent, though, was much easier than the assent.  Especially since we used the actual trail path on the descent rather than the alternate path we took on the way up.  And remember those gangways I mentioned earlier?  Here they are. 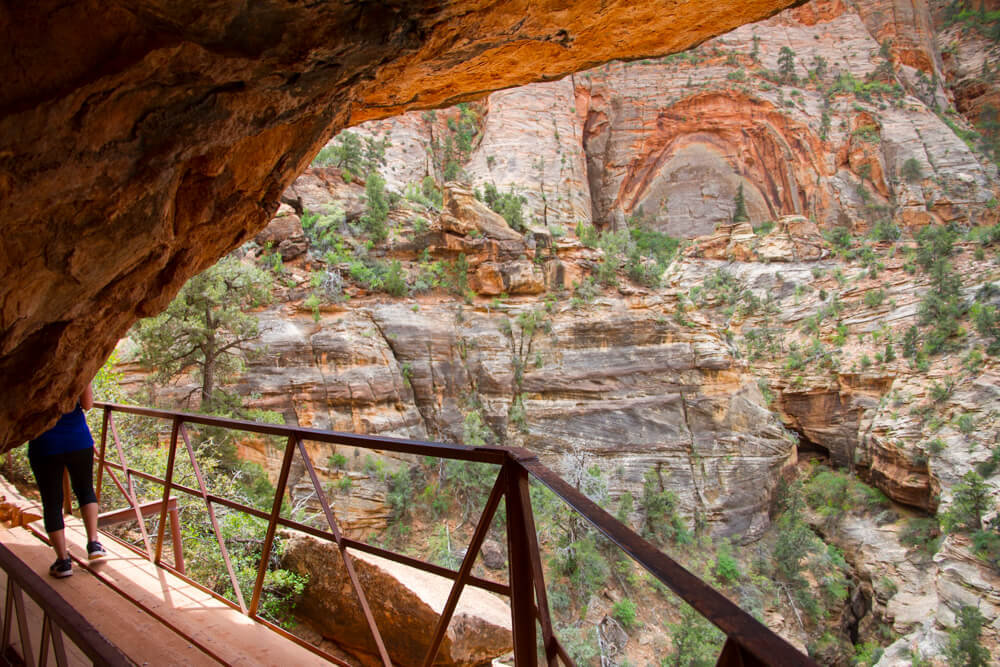 And here’s the portion carved out of the cliff. 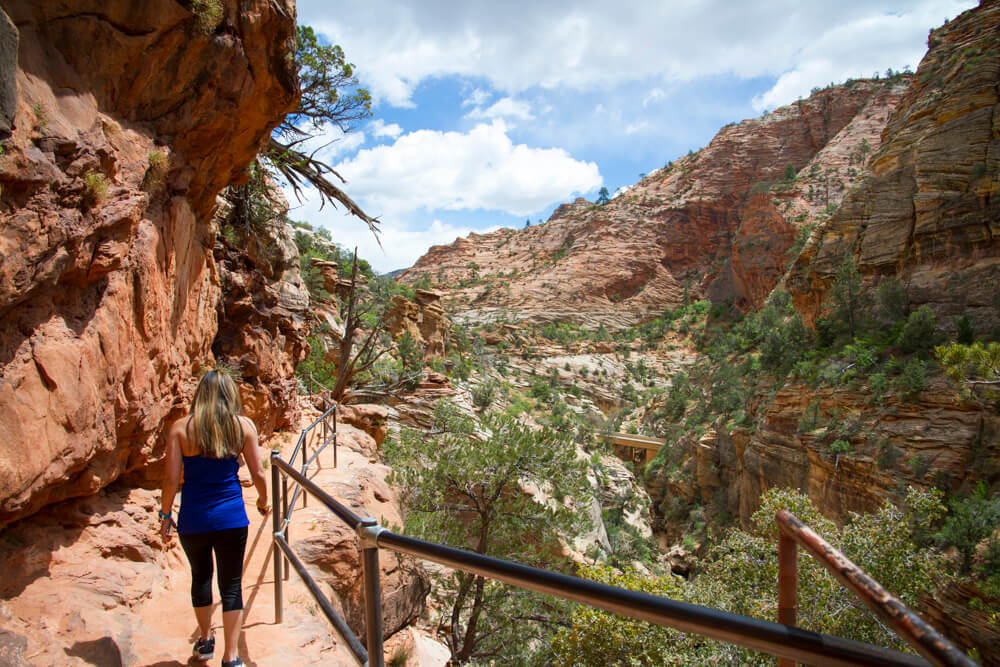 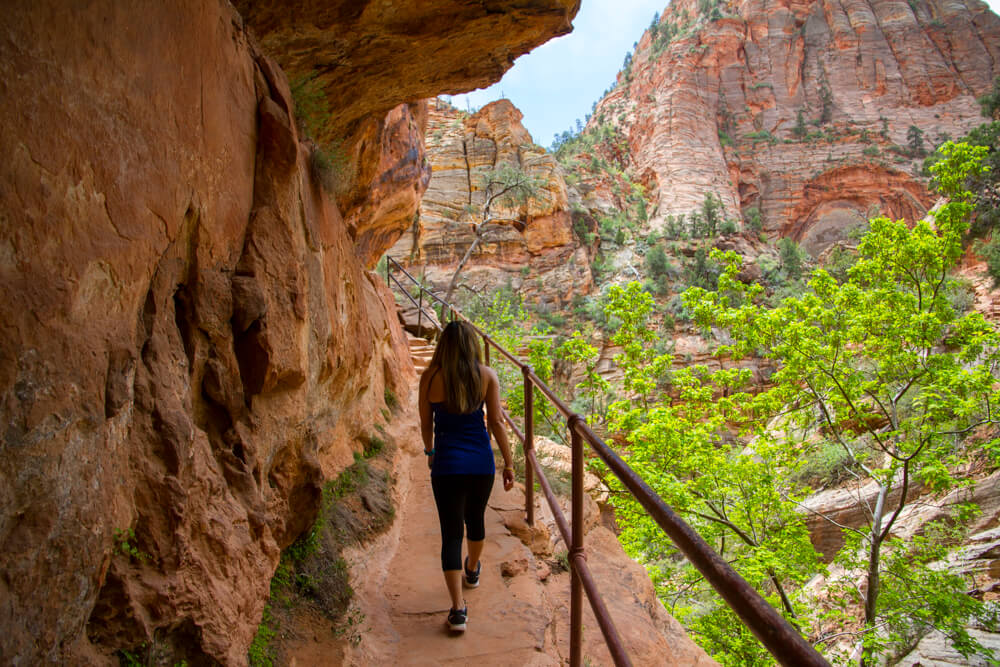 Soon enough, we made it back to the trailhead and had to descend the stairs. 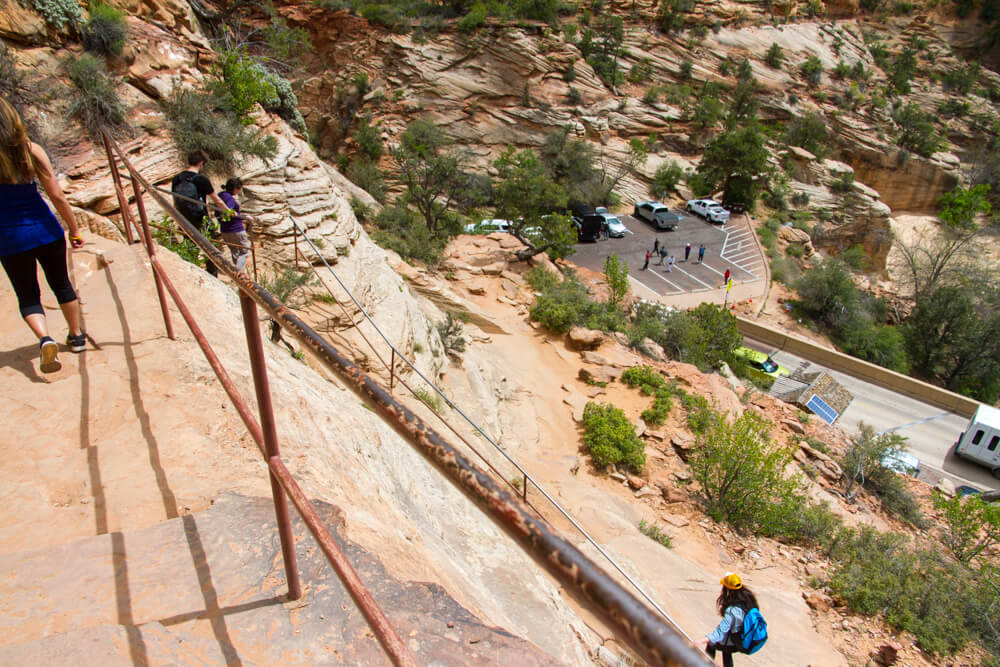 Above you can see the primary parking lot for the Canyon Overlook trail… And the tunnel traffic.  Oh, and the only wildlife we saw during the whole hike?  It was a single Big Horn Sheep near the parking lot. 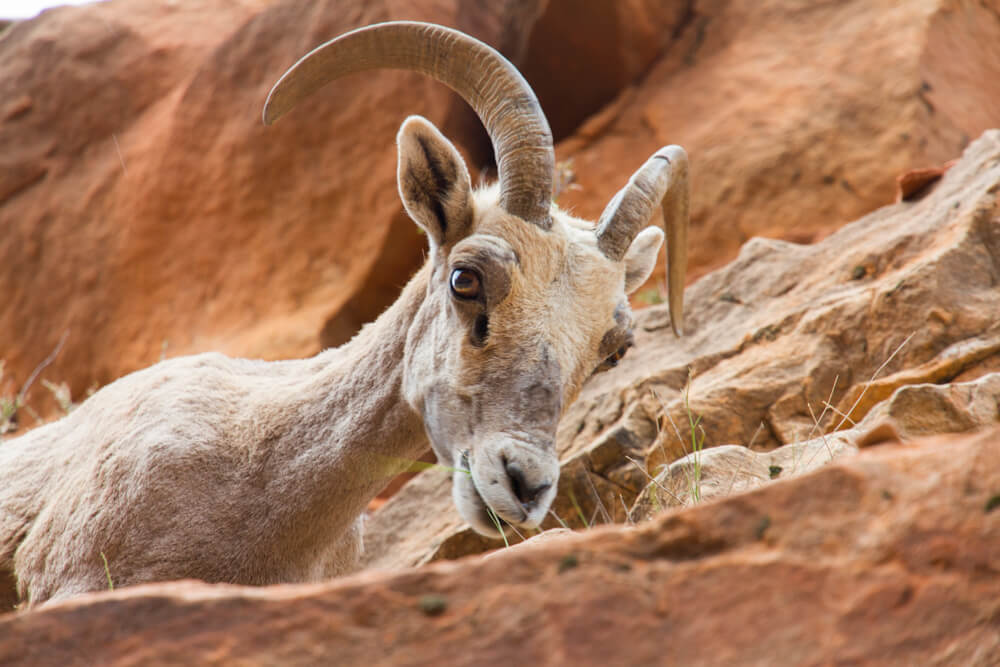 Once back at the car, we backed out of our stall and waited for a break in the Carmel Tunnel traffic so we could head back towards Springdale.  Once out of the park, we stopped at a visitor center in Springdale to use the restroom and buy some nicknacks.  From there (there’s no cell reception in the park) I set our GPS for the return journey to Vegas.

This time around, the GPS took us on a much straighter, more boring route.  And by the time we got back on the I-15, I had already become bored and sleepy.  So I set the cruise control to 85 MPH and had myself a snack as we rocketed back towards the Strip.

Zion National Park truly is an awe-inspiring place.  Going in, I was apprehensive of the hike because I’m afraid of heights.  But thank to the way in which the trail was constructed and maintained, this wasn’t an issue for me at all.  In fact, my only regret during this visit was not spending more time there.  And yes, it is a little silly driving 3 hours each way to enjoy a 1 hour hike, but it’s all we had time for.  So Zion is now on my list of places to return to and explore further.  After all, we only scratched the surface of this amazing park during our visit.