After a satisfying brunch at Jane, the wife and I headed out on our Big Apple Day 3 adventures.  Now, we didn’t really have any plans for this day.  We were thinking about going to the 9/11 Museum, but that didn’t happen.  The metro line we took from Jane skipped the Cortland St. station and instead stopped at South Ferry Terminal.  Since this is where you need to be for the Statue of Liberty ferry and we had CityPass passes to use, we decided to just check out the Statue that day.

Now I have a gripe about visiting the Statute of Liberty, and this is before we even got our tickets.  As soon as you get of the metro, you’re inundated by people “guiding” you to the ticket line.  The way they’re all crowding you and kind of yelling at you, I thought maybe these guys were sleazy street salesmen.  We were confused to say the least, and just keep telling them no, we’re not going to the Statue.  Eventually someone explained the situation to us, and all was well.  But perhaps these helpers should have a uniform and/or identification to help avoid confusion?

Anyway, we walked through Battery Park towards Castle Clinton.  Here you’ll purchase your tickets for the ferry to Liberty and Ellis Islands.  In our case, we simply had to exchange our CityPass passes, for which there is a dedicated line on the far righthand side.  After receiving your tickets, you’ll then head towards the pier, and likely end up in a LONG queue for security.  And after your airport-style security screening, you’ll then queue for the ferry.  Now, the actually ferry schedule varies by season, so for the schedule during your planned visit, visit Star Cruises. 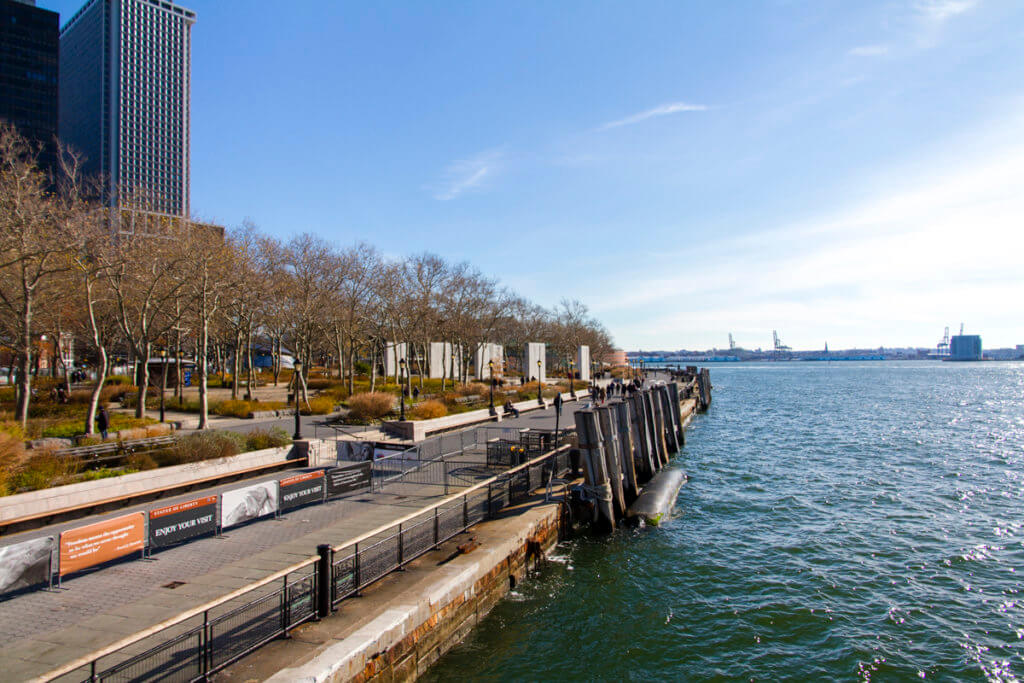 Though we waited for an eternity in the security line, we lucked out and got onto the ferry QUICK after screening.  The ferry ride over to Liberty Island is a quick 20 minutes, but the views of the city are spectacular!  We ended up on the aft, starboard deck, which unfortunately is right above the exhaust port, so the fumes were unpleasant… But the starboard side is definitely the side you want to be on for the views. 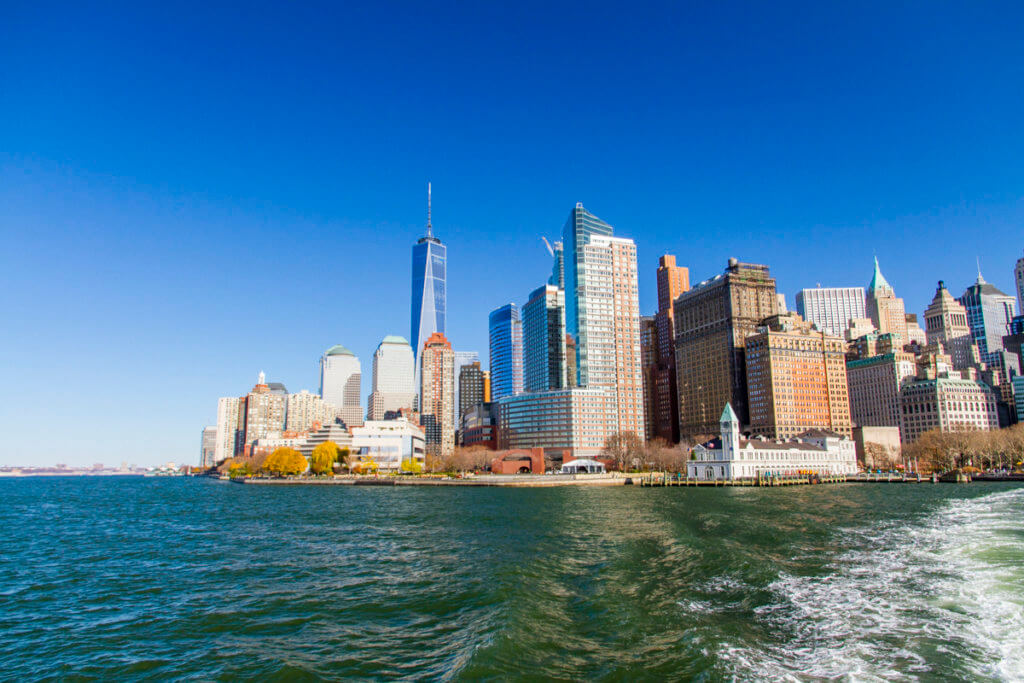 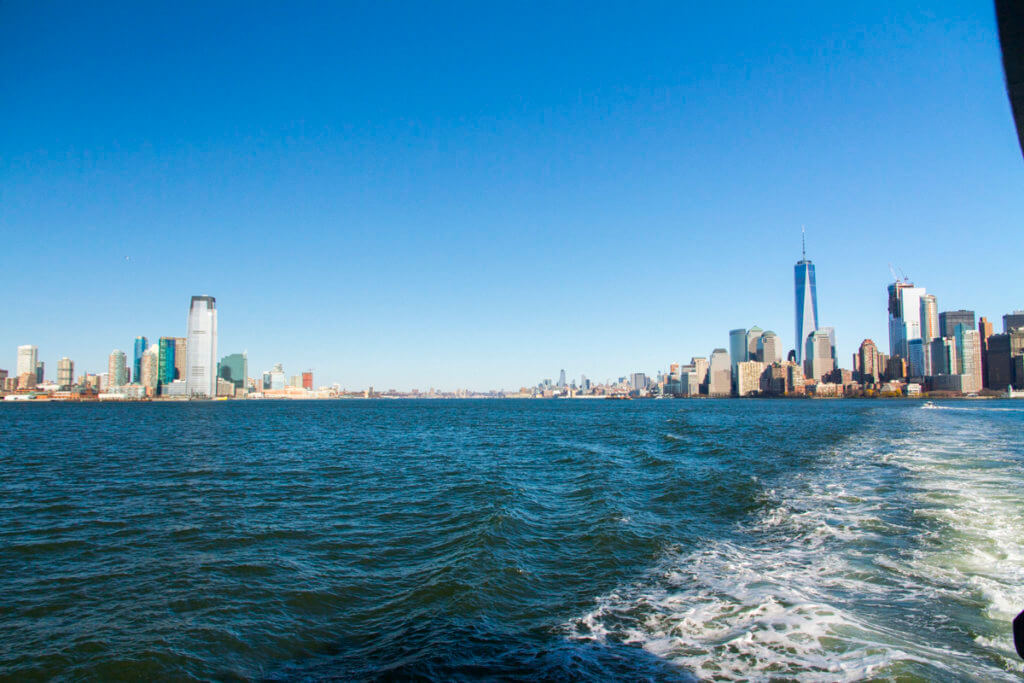 It’s also the side that’ll face the Statue of Liberty when you pass Liberty Island on the way to its pier. 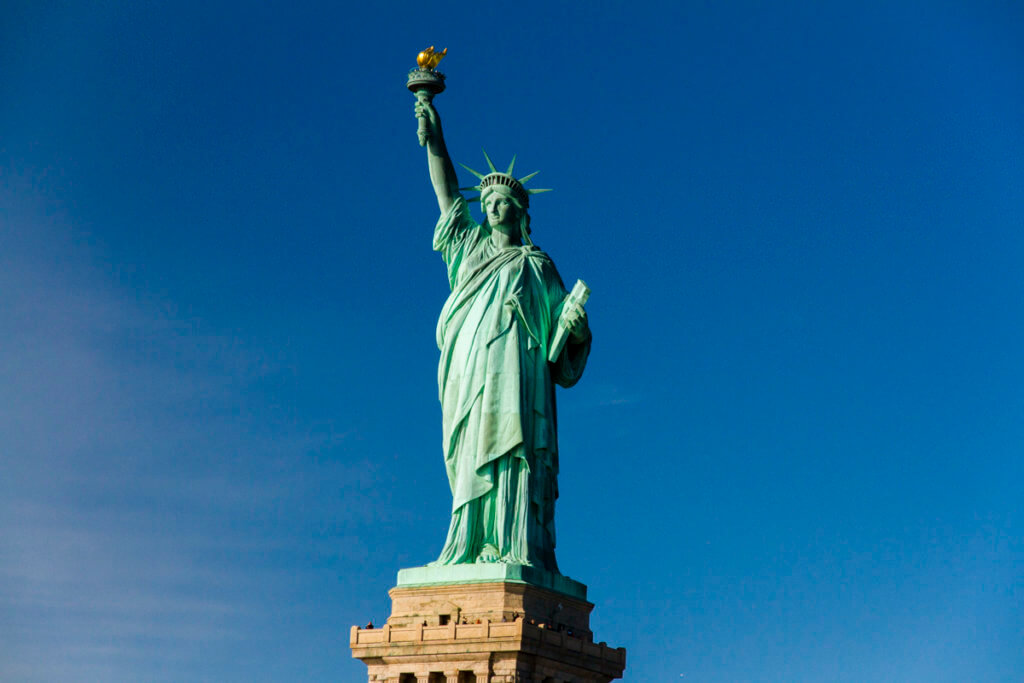 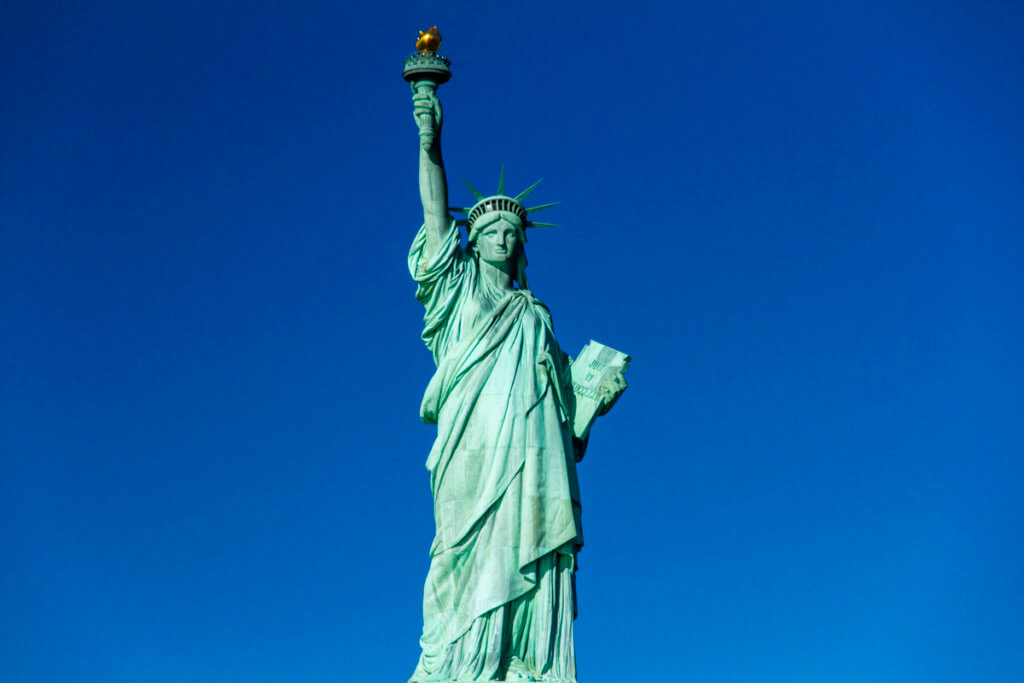 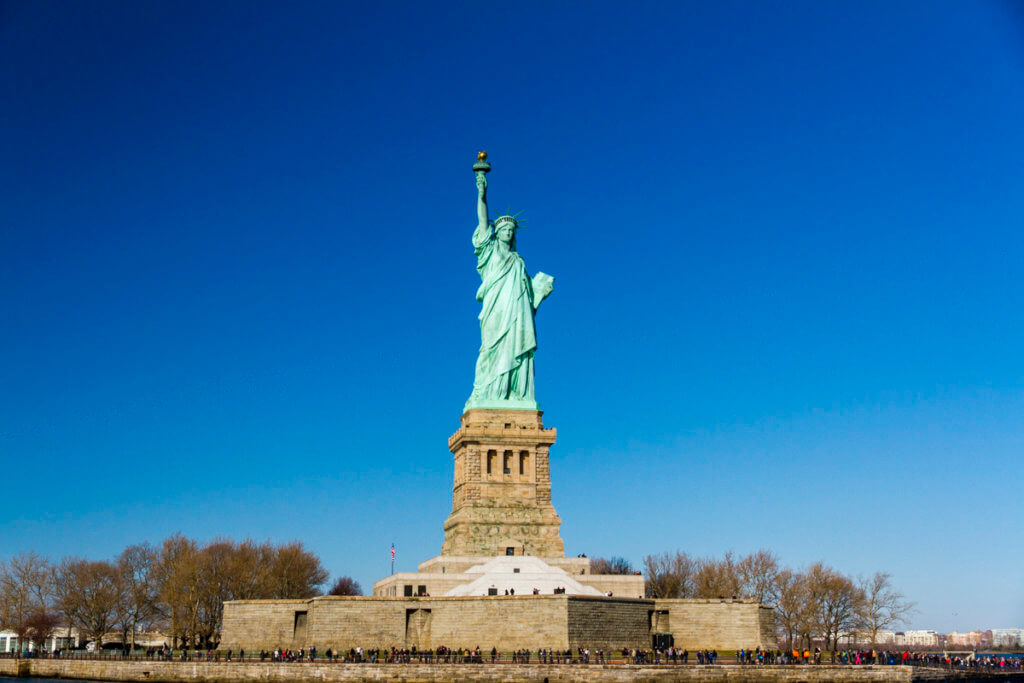 And in no time, you’re pulling up at the pier on Liberty Island.  Oh, and did I mention the view from the starboard side?  You’ll get a lovely view of the back of the Statue of Liberty from here. 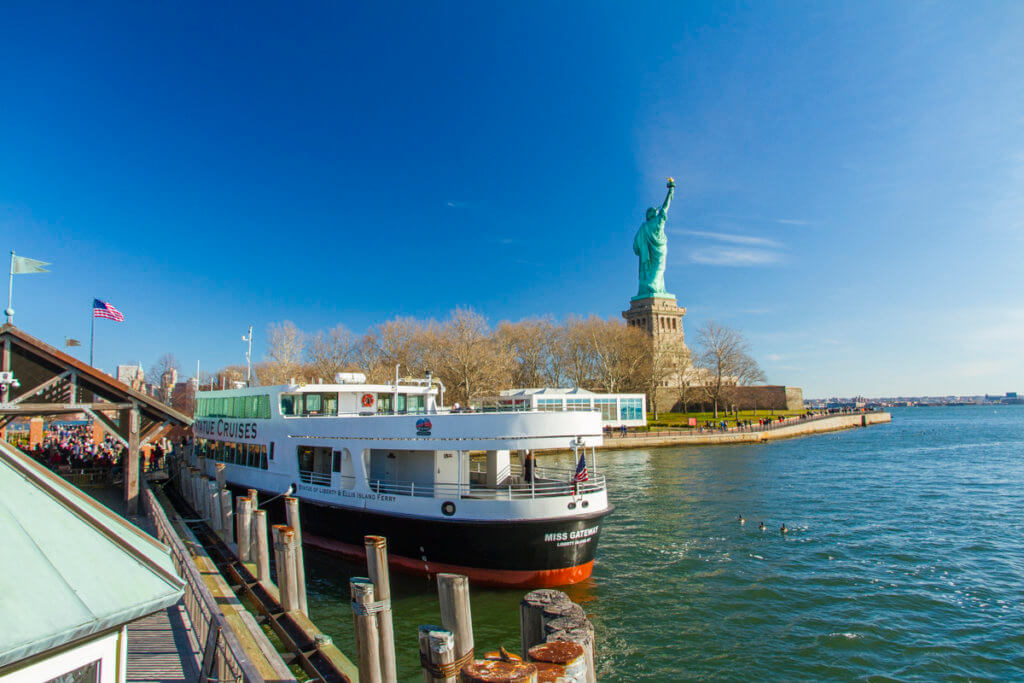 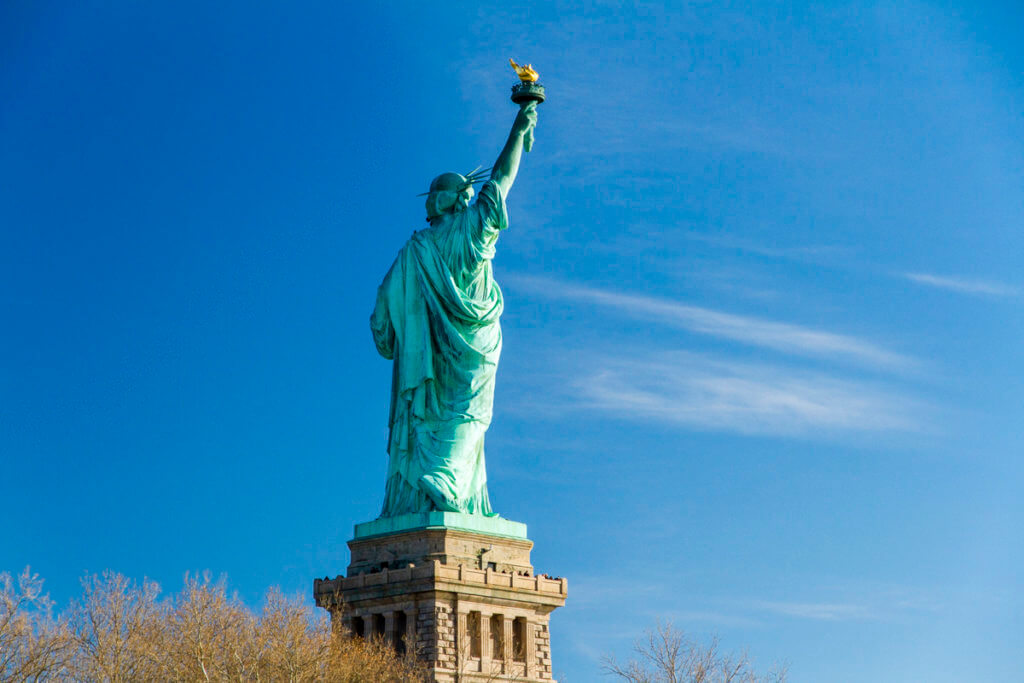 We weren’t sure if we were actually going to go to Liberty Island, so I didn’t reserve a pedestal or crown visit.  But even if we had planned to come to Liberty Island from the beginning, I still wouldn’t have made reservations.  No, I think that would take too much time day-of.  Instead, the sole purpose of coming here for us was to see the Statue of Liberty up-close, and the lovely views of the New York City skyline. 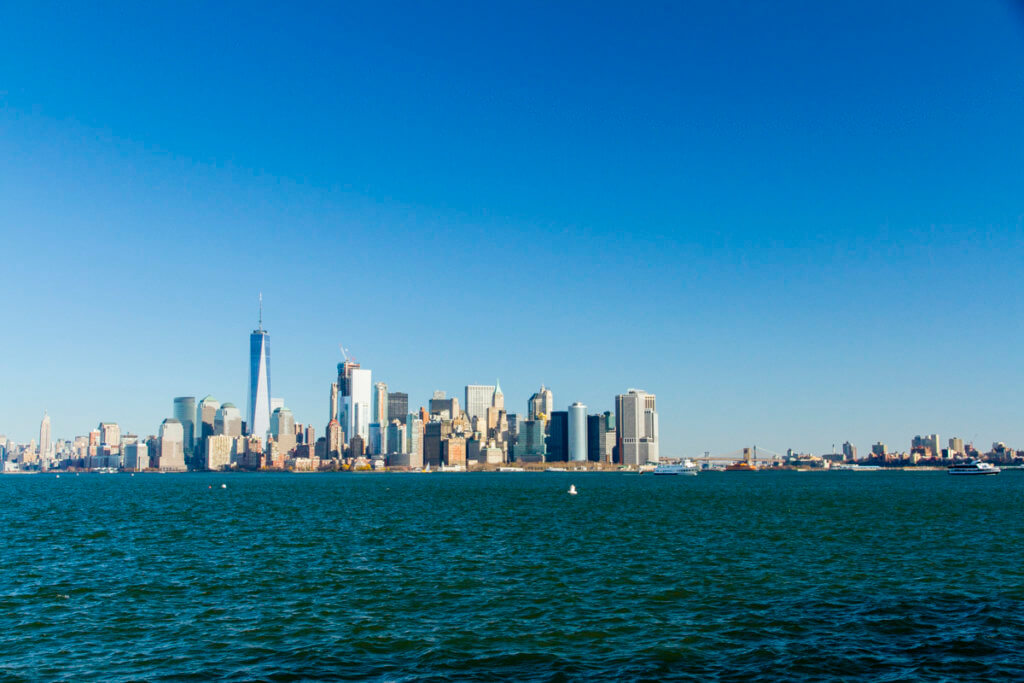 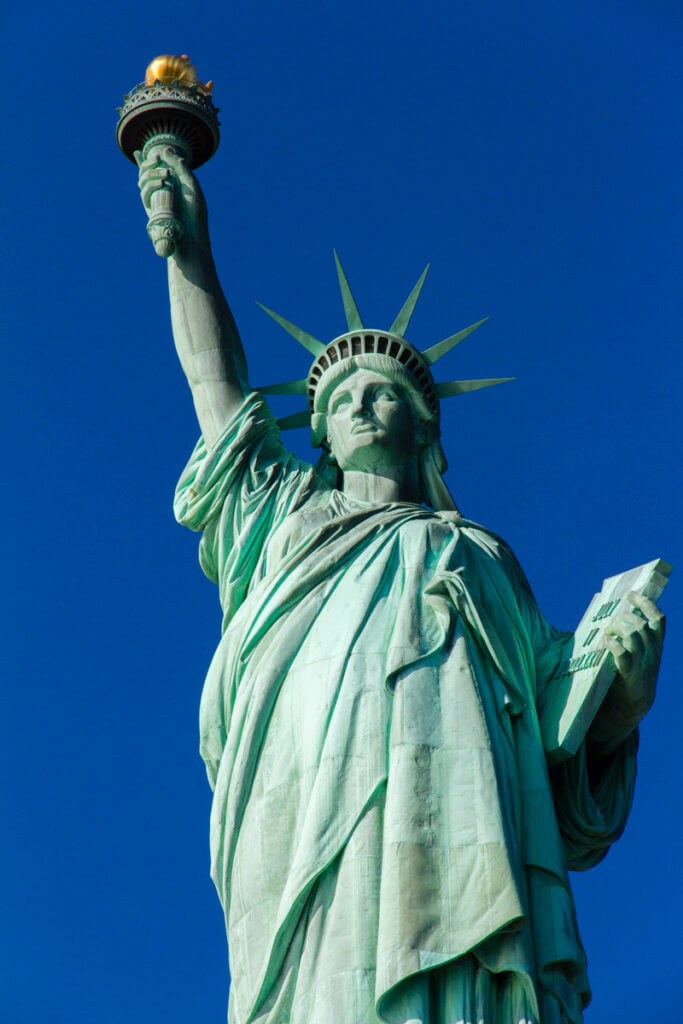 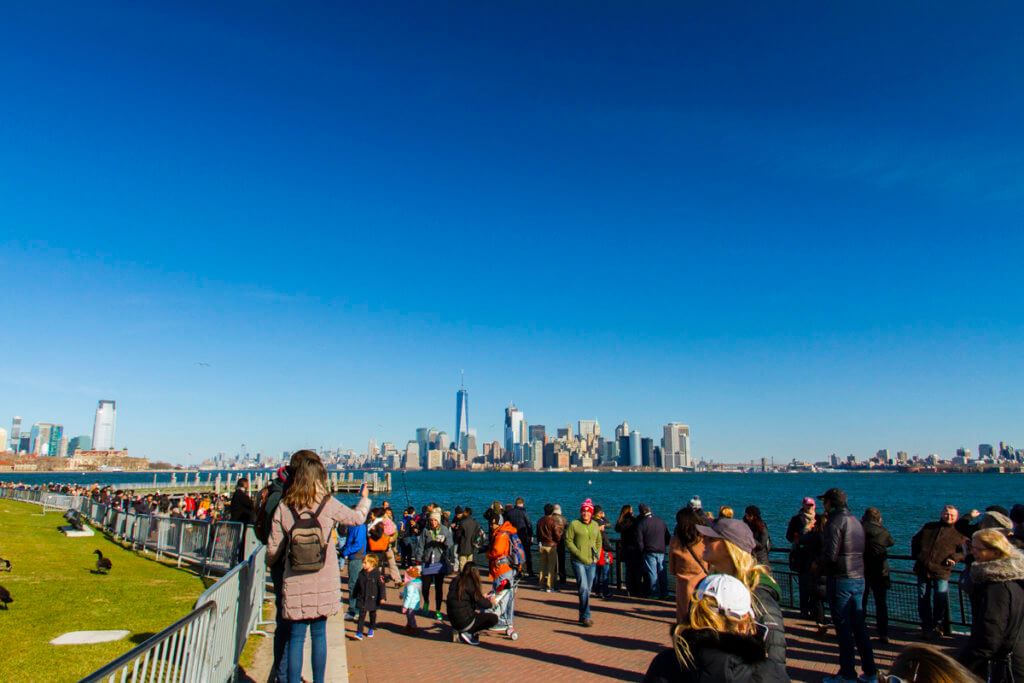 I loved the views of One World Trade Center from the ferry, too. 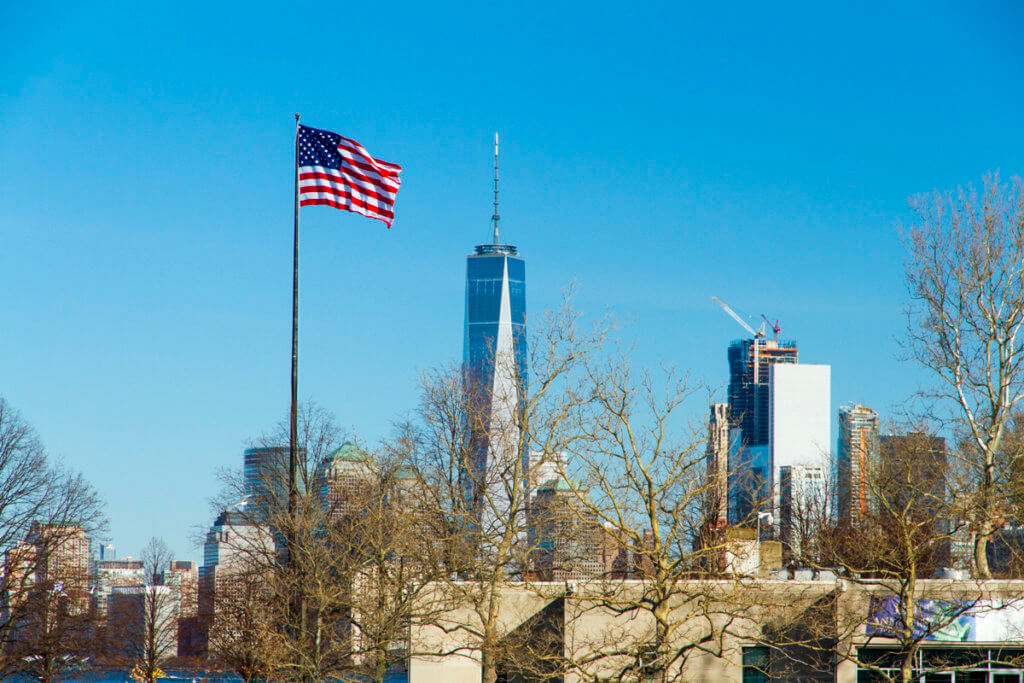 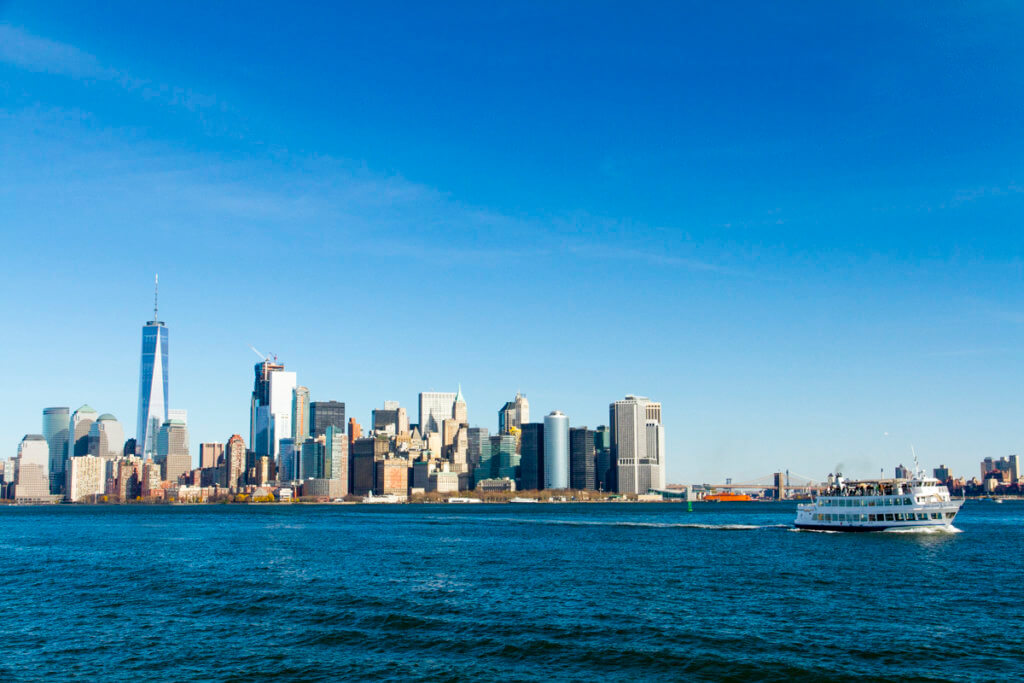 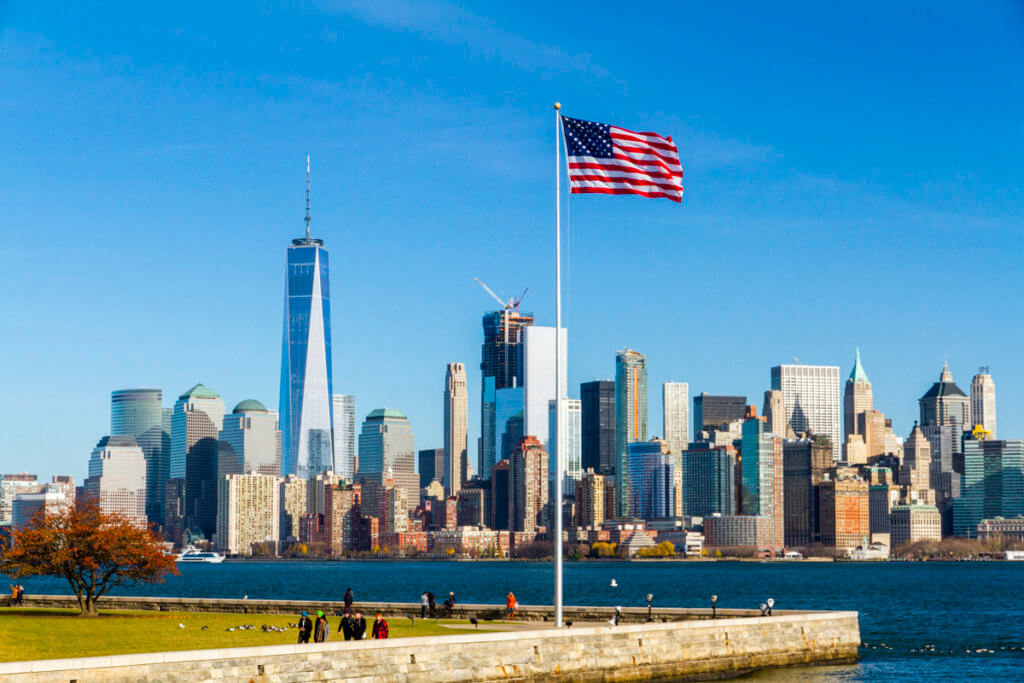 After you get on the ferry again, it’s another 20-ish minute ride to Ellis Island.  In the interest of time, we chose not to disembark here. 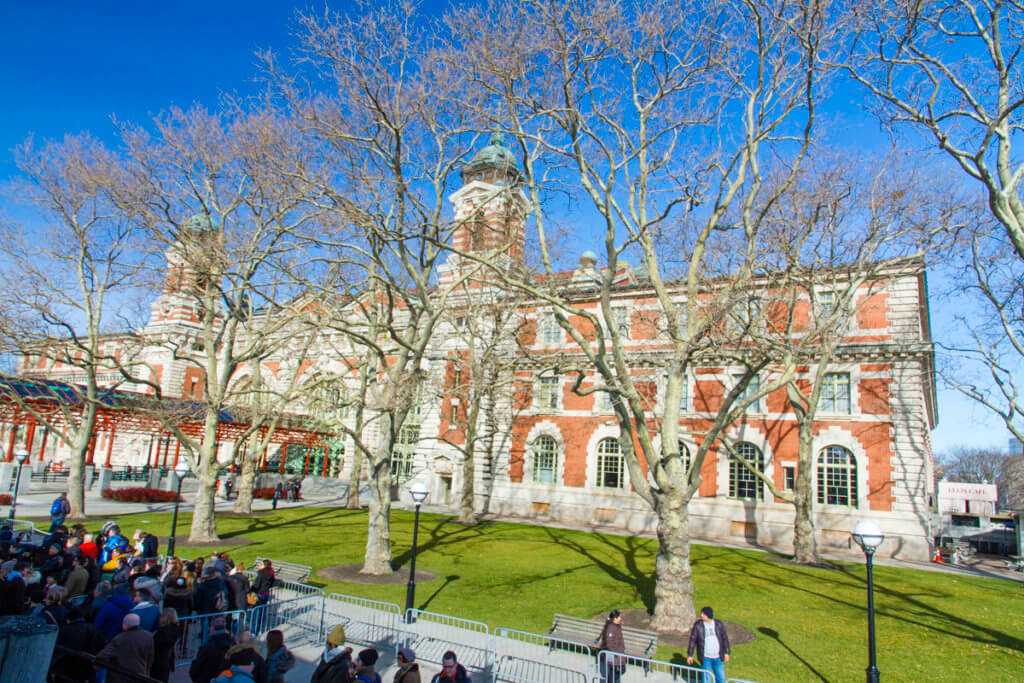 From Ellis Island, it’s a 10 minute ride back to Battery Park, and that’s it.

Since we were already in the area, we decided to walk around the Financial District.  We wanted to see the Charging Bull, but it was surrounded by a hoard of Chinese tourist… and a little boy scaling the statue.  We were about to stand around and wait it out, so we walked off.  We did see the American Express headquarters, though. 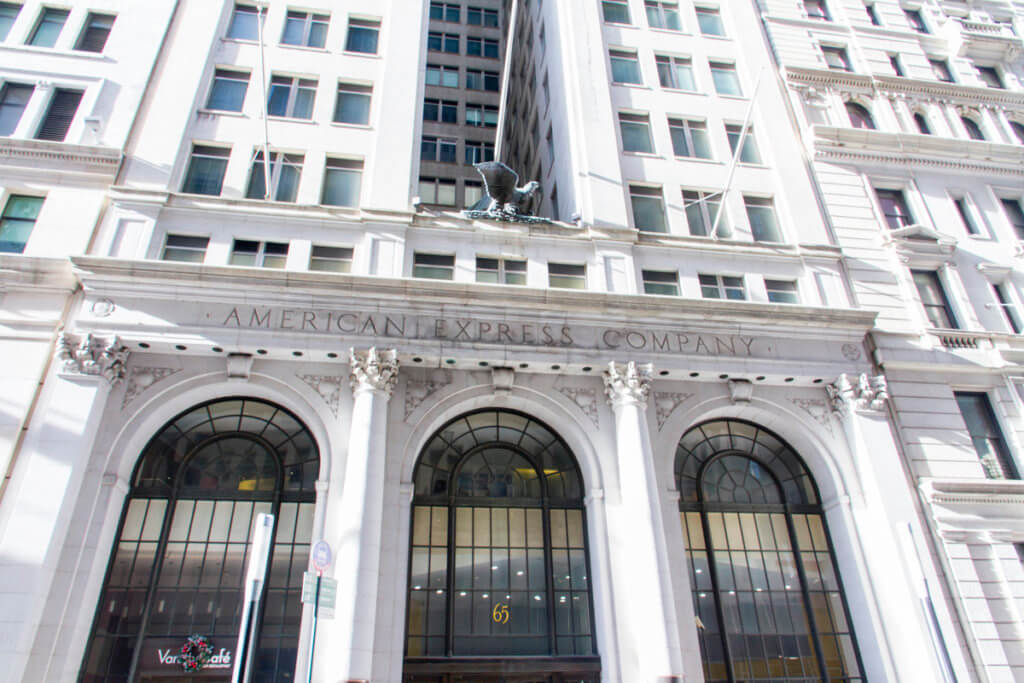 We eventually took a quick lunch break, which I’ll cover in a separate post.  But after lunch, we decided to walk over to the Brooklyn Bridge. 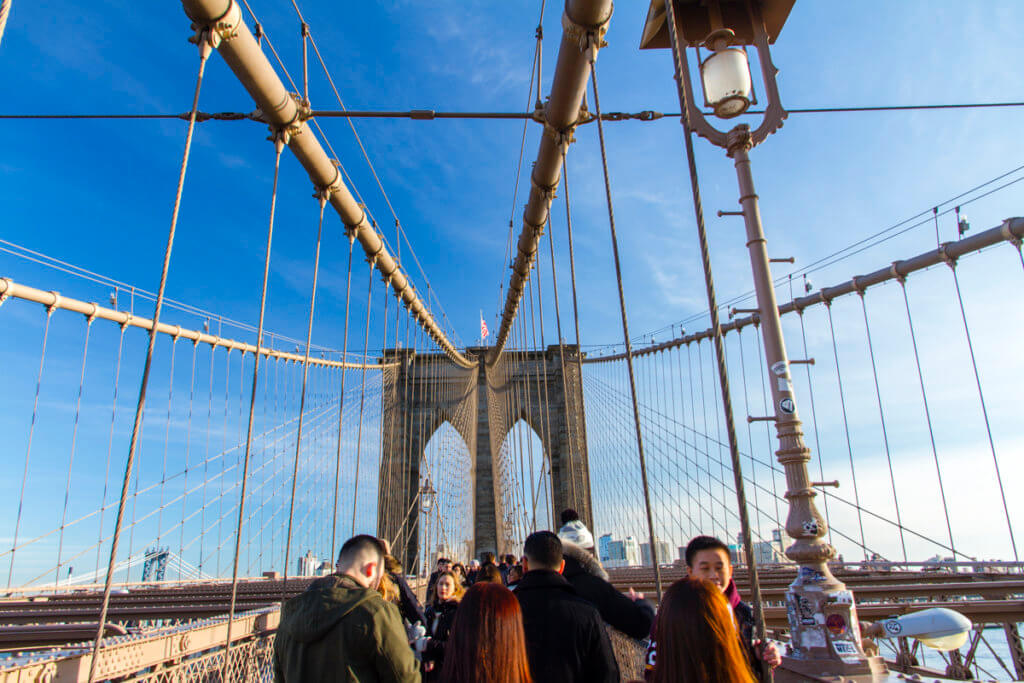 Seeing the nearly 134 year old bridge is something I’ve wanted to do for a long time.  Unfortunately, it seems the rest of the world want’s to see it too.  The place is SO crowded, the experience is actually pretty awful. 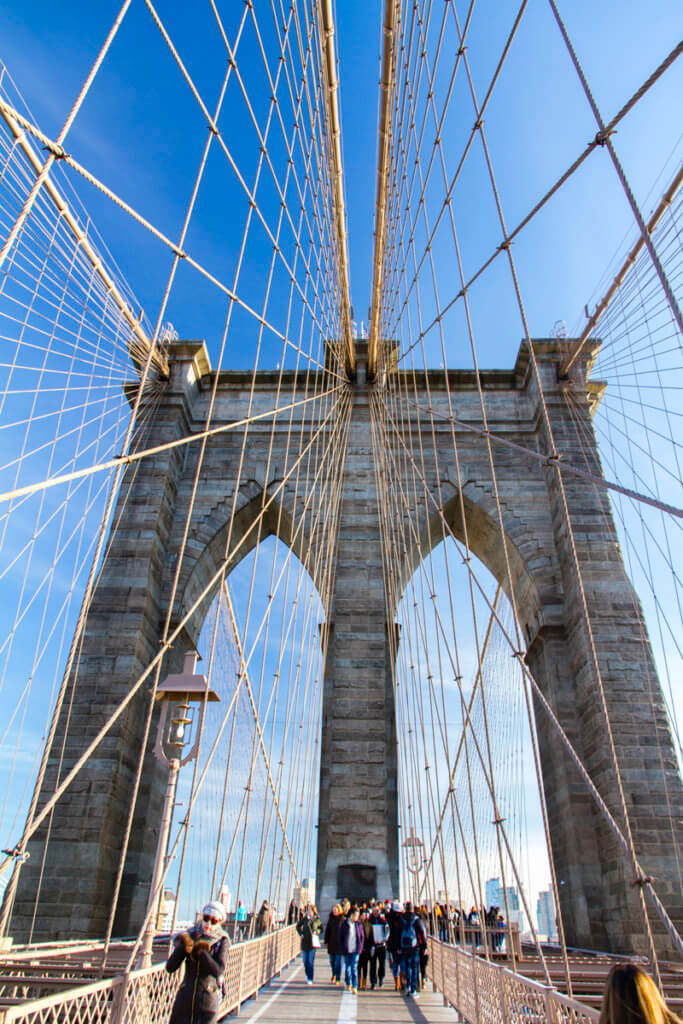 The hoards of tourists, however, doesn’t diminish the grander of this magnificent piece of architecture.  Unfortunately, the crowds meant I couldn’t get any creative shots I wanted to try, though. 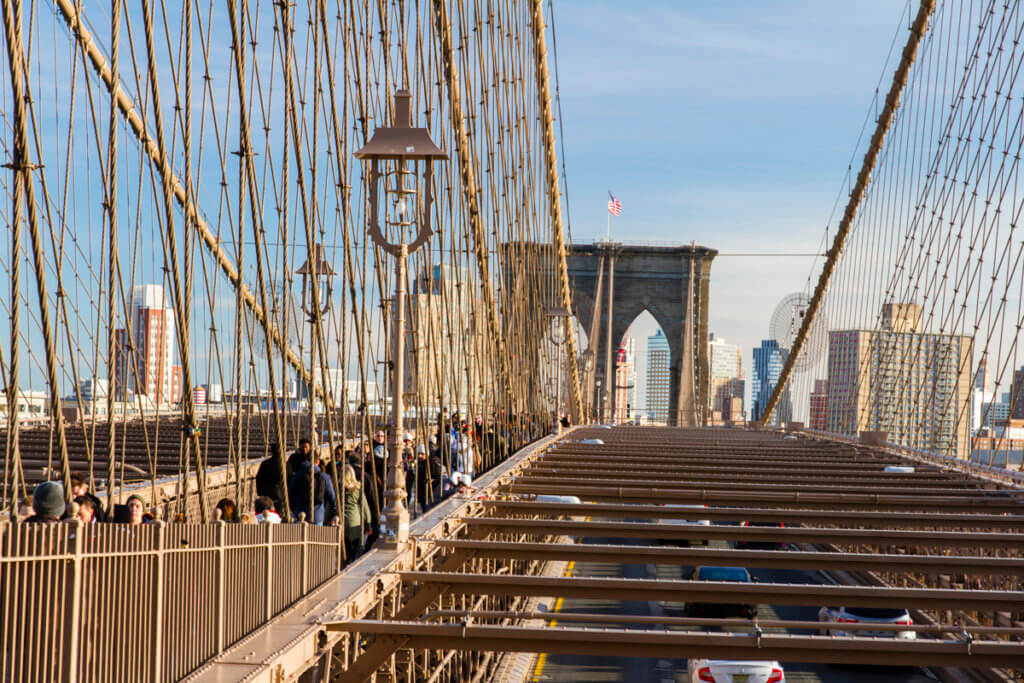 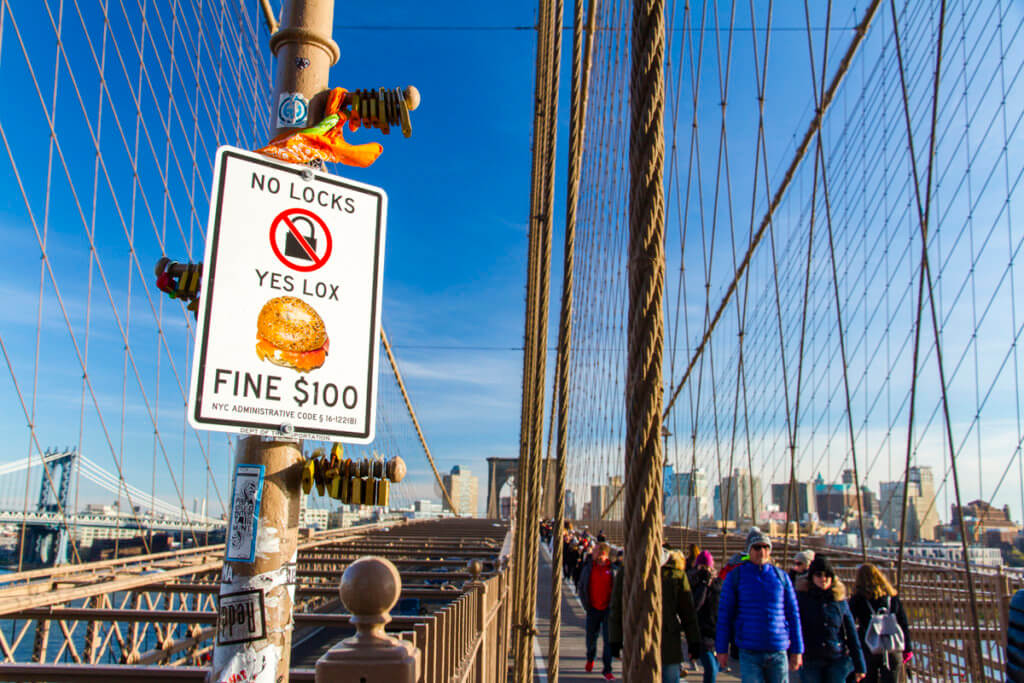 Because of the crowds and the horrible pain our feet were in, we decided to turn around shortly after the first pier. 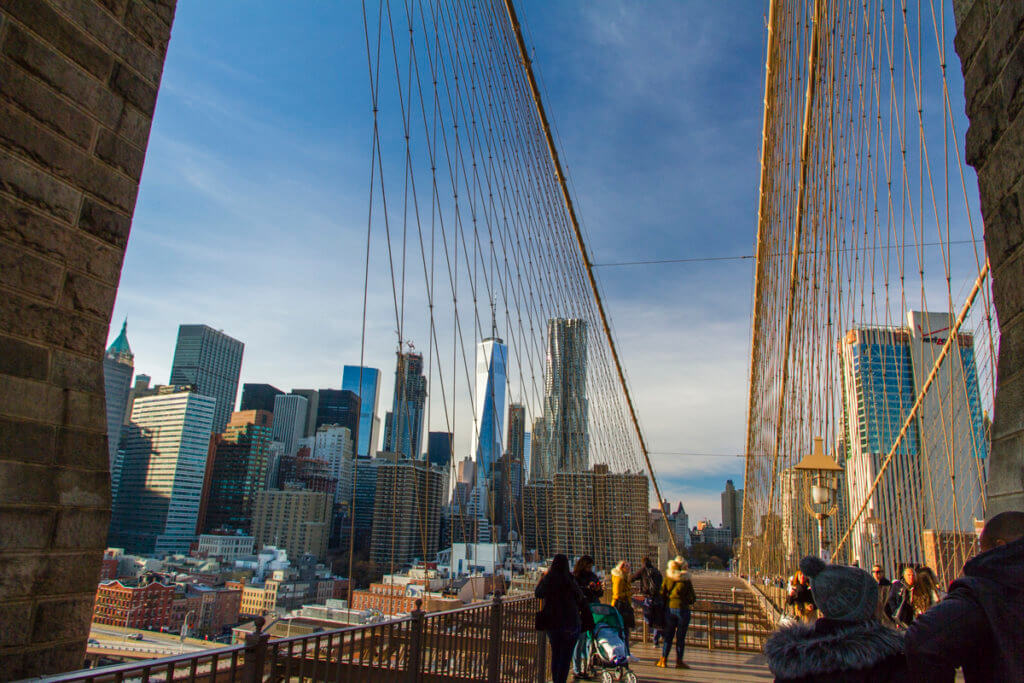 From here, we hopped on the metro once again and headed back up to our hotel.  But before actually going back into our room, we decided to walk a block past our hotel and pay B&H Photo Video a visit. 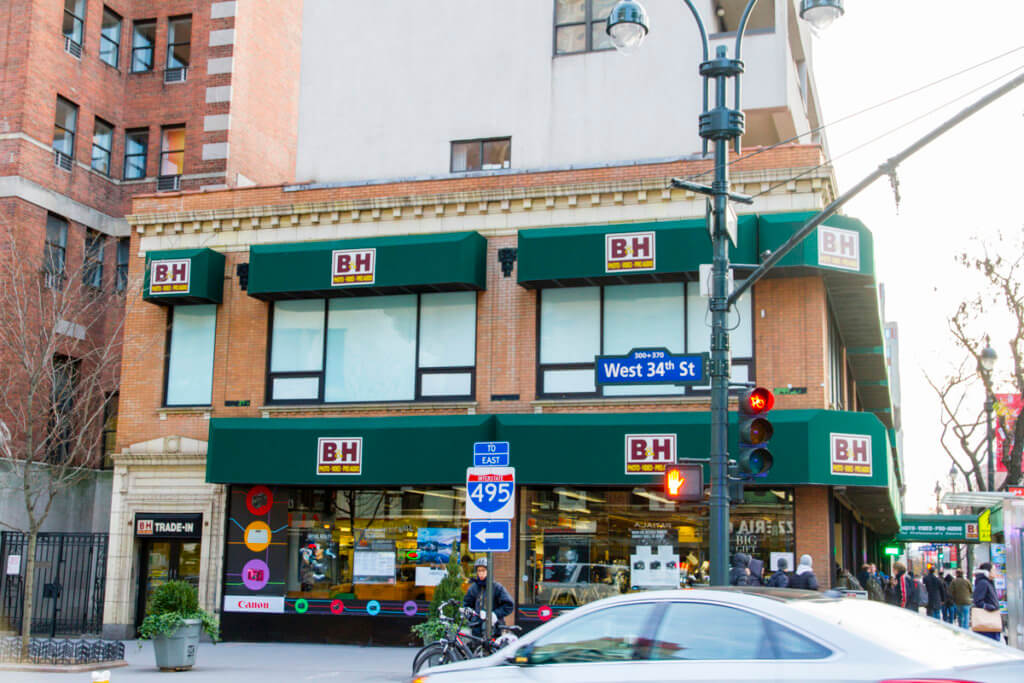 I had stupidly forgotten my camera’s battery charger at home, so visiting B&H was a no-braininer since it’s so close to our hotel.  I’ve been shopping their website for years, so this was a great opportunity to finally visit the actual store.  The place is a lot smaller than I thought it was, and a lot of the camera stuff are behind a counter.  In fact, most of their inventory isn’t on the floor.

You can, however, simply go to the department you need to get something from, go to an associate at the counter, and they’ll have it sent to the front of the store.  You then take your ticket to the cashiers, pay, and pickup your item from he pickup counter.  Then it was back to the room to figure out where to go for dinner.